Frogs and turtles are two very different animals. They might share some similarities, but they don’t even belong to the same family. However, in the wild, they can occupy the same spaces as each other. Can they coexist peacefully?

Frogs and turtles are both amphibious, they spend a lot of their lives both in water and on land. They also share some similarities in appearance, such as having four legs and webbed feet. However, they differ greatly in size and lifestyle. 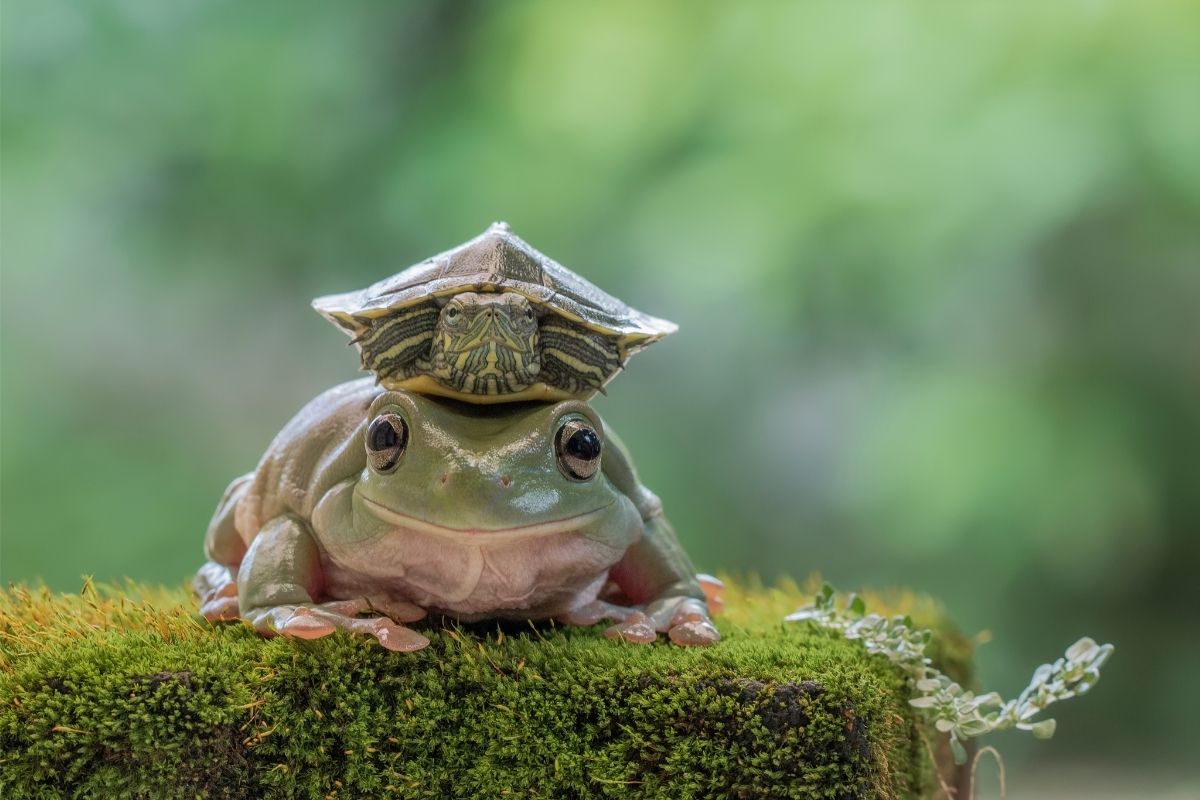 Turtles are reptiles, while frogs are true amphibians. They also eat different food and have very different behaviors, and there are many species of both animals that have varying characteristics that can make the idea of housing the two together even more confusing.

If you’re a pet owner looking to get frogs and turtles but you aren’t sure whether you can house these animals together, then this is the guide for you.

Here, we’ll take a look at whether frogs and turtles can live together, both in the wild and in an aquarium, as well as the best way to house these two animals if you want to have both.

How Do Frogs And Turtles Coexist In The Wild?

As mentioned earlier, frogs and turtles are two completely different animals with different lifestyles and diets. It’s not surprising that they would be unable to live together in the wild.

However, there are several species of frog and turtle that do exist in nature alongside one another.

For example, the American bullfrog and the common snapping turtle are often found living side by side.

This is because they are able to adapt to similar environments, and their required habitats are similar; additionally, while they are both opportunistic feeders, their preferred diets are different enough that they typically won’t encounter each other.

There are also cases where the two species stick to their own territories and, as a result, stay out of each other’s way.

However, it isn’t always possible to find them living together peacefully in the wild. Sometimes, they may only come into contact when they’ve been introduced to each other through human activity.

When frogs and turtles do occupy the same spaces, there’s often a risk of the turtles preying on the frogs.

Many species of turtle are happy to eat frogs; alternatively, if a large frog and a small turtle occupy the same ecosystem, the frog might try to attack and eat the turtle instead.

What About In An Aquarium?

As you can probably imagine from how they behave in the wild, turtles and frogs shouldn’t be kept in an aquarium together. While they may seem like they could fit comfortably in a tank, the differences between the two mean that they’d never really get along.

If you were to put a frog and a turtle in an aquarium, you’ll likely end up with one attacking the other.

This would normally be the turtle due to the normal differences in size; however, a larger species of frog would also be able to eat a smaller turtle if the two were housed together.

While you should avoid keeping frogs and turtles together in an aquarium, you should still consider getting them if you have suitable space available for different tanks. Housing them separately is the best option so you can prevent them from attacking and/or eating each other.

There are some occasions where you can house the two species together – for instance, a box turtle can be kept with an American green tree frog or gray tree frog if you give them enough space, as they will mostly keep to themselves.

However, even if you house these species together you’re still at risk of harm coming to one of your pets, and it’s much better to keep them in separate aquariums to avoid this risk.

Why Can’t Frogs And Turtles Be Kept Together?

The risk of one species eating the other isn’t the only reason why you shouldn’t house frogs and turtles together. There are several other problems that can arise if you make these two species share a space.

Here are a few of the biggest reasons why frogs and turtles should be kept separate.

While there may be plenty of space in the wild for frogs and turtles to keep to their own territories, the same can’t be said for an enclosed aquarium. Without enough space to move around freely, the two species will start competing over resources such as food and water.

They’ll also need to spend more time interacting with each other than they do in the wild, which means they’ll be more likely to get into fights.

You need to have a good amount of distance between the two species for them to coexist, and a single tank just isn’t enough to provide that.

It’s not just territory that you need to worry about – just living in the same space as each other can be harmful to your frog, your turtle, or even both.

Several species of frogs have toxins in their skin that can be released into the air, the water, and even the soil within the enclosure. These toxins can build up to harmful levels that can make your turtle sick or even cause it to die.

Even frogs that we don’t typically consider to be poisonous (as they aren’t harmful to humans) can be dangerous to house with a turtle.

Meanwhile, the amount of waste that turtles create means that the enclosure will quickly become unsuitable for your frog to live in. As well as being unpleasant for your pet, the ammonia produced by the waste can be toxic to amphibians.

As frogs absorb nutrients through their skin, exposure to waste or a build-up of ammonia in the tank can have a serious impact on your frog’s health.

As we’ve already covered, turtles often prey on frogs in the wild and the same applies if you keep them in a tank together. Turtles have much more protection than frogs, while their beaks can deal a lot of damage to a frog’s soft skin.

Turtles are typically much faster swimmers than frogs, which makes it even easier for them to prey on the frog they share their tank with.

While larger species of frogs, like the African bullfrog and the South American horned frog, are aggressive and eat pretty much anything they can take on, you’re much more likely to have to worry about your turtle eating your frog.

Even without the risk of being eaten, bullying and attacks from the larger species can lead to the other animal being stressed and possibly injured.

How To House Turtles And Frogs

Now that we’ve established that you shouldn’t keep these two species in a shared aquarium, what is the best way to house them? In this short guide, we’ll go over a few things you need to do when setting up enclosures for your turtles and frogs.

How To House A Turtle

Turtles spend most of their time in the water, and they need plenty of space to swim around. The general rule of thumbs is that your tank needs 10 gallons of space for every inch of turtle, as well as accounting for how large they will grow when they reach adulthood.

They need a mix of both water and land in their enclosure, but with more space for swimming. They’ll also need space to dig, hide, and an area to bask.

These can change between different species of turtles, but you’ll typically need your turtle’s aquarium to have a water temperature between 72-77 degrees Fahrenheit, with the dry area meant for basking at around 85-90 degrees Fahrenheit.

The tank also needs a humidity level of around 70% and a mix of both wet and dry ground.

How To House A Frog

Like turtles, frogs need to be kept in a warm and humid enclosure with plenty of space to swim and climb. However, they don’t need as much water as turtles and can get away with a smaller tank.

Your tank should have around 10-15 gallons of space per frog, although larger species might need more room.

Again, there are differences between some species of frogs, but most frog tanks should be kept at around 77-85 degrees Fahrenheit and at a humidity level between 65-80%.

Some types of frogs will need more or less water – for instance, the African dwarf frog is fully aquatic and needs a tank completely filled with water, while tree frogs spend most of their lives on land and need less water as a result.

While there may be some occasions where it’s okay to house a frog and a turtle together, you’re still better off keeping them separated to avoid the risk of tragedy if something goes wrong.

There’s nothing wrong with having both of these animals as pets, and they are both fascinating, low-maintenance species that are an absolute joy to look after. However, as pet owners, it is our responsibility to give our animals the best conditions for them.

Keeping your turtles and frogs apart from each other in separate tanks will make sure that both species are able to live and thrive in their own spaces without the risk of one coming to harm.

By looking after your frogs and turtles properly you can make sure that your pets stay happy, healthy, and get the best life possible.