Turtles are known for gliding through the water, basking quietly in the sun, and a slow moving walk when on land.

So, when you picture a turtle, you’re unlikely to think of them climbing up trees. This daring feat of upward movement is something we might expect from nimble monkeys and squirrels, not the steady turtle. 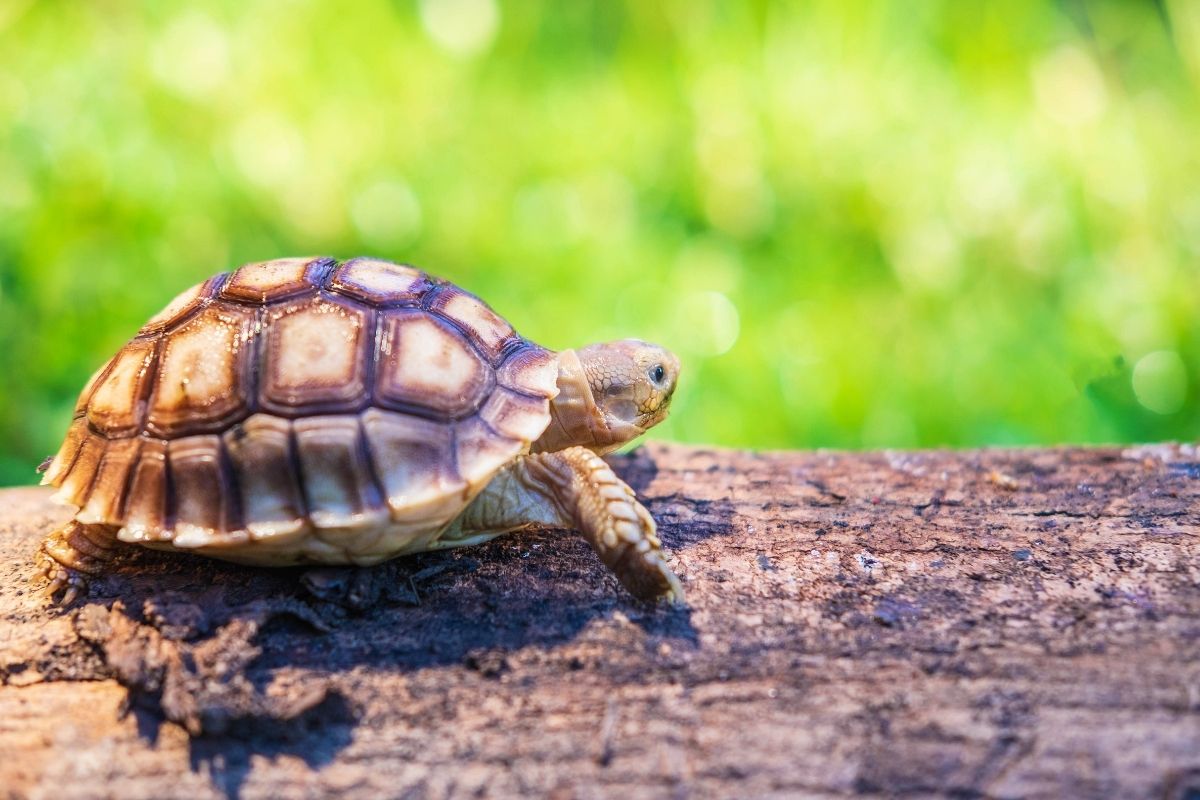 But turtles can climb trees, provided they have the right surface to get their footing.

Although not every turtle can, some species are fairly adept climbers, and might do so looking for food, a place to rest, or a hiding spot. Learn more with this guide.

Can Turtles Climb Trees? And Why?

Turtles can climb trees, but it isn’t exactly a common turtle behavior. If you enjoy keeping pet turtles, they won’t appreciate losing part of their tank for a climbing frame.

But out in the wild, you might see the occasional turtle doing its best to tackle the tree trunk.

There are a couple of reasons why a turtle might decide to climb a tree. Often it will be because they’re searching for food. In the hunt for a meal, a turtle will try any place that seems to be a likely food source.

Another possible reason for tree climbing is danger. When predators are around, a turtle will look for the best way to escape. With no easy options, a tree represents something of a sanctuary.

Similarly, a turtle might start climbing trees because something in its usual habitat is making it feel unsafe.

Again, this could be a predator. But it could also be that the water conditions have deteriorated, or there’s no longer a good basking spot.

But it might just be a chance for some fun! Climbing a tree could be an exciting and stimulating experience for a turtle.

The tree might also be in a warm spot, and the turtle is looking to bask. Turtles like to explore their surroundings, and if a tree seems interesting, they might think it’s worth a look.

How Can Turtles Climb Trees? 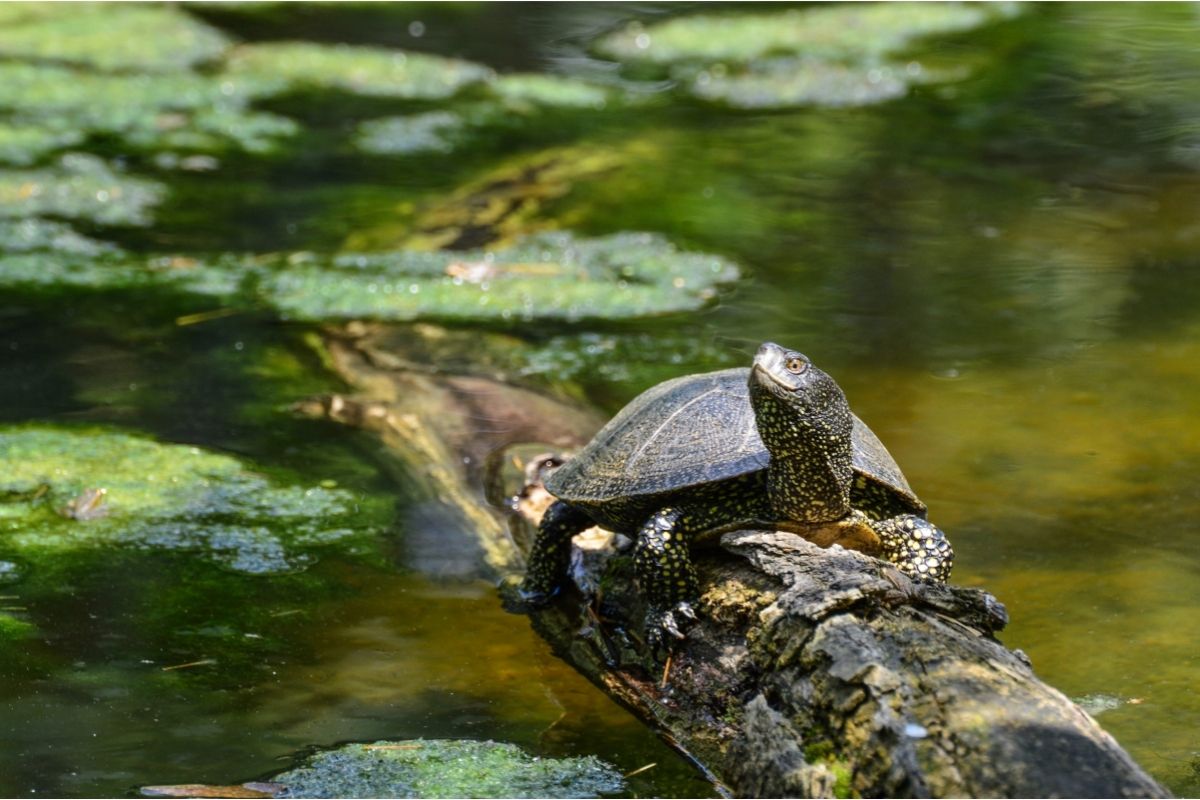 To understand turtles climbing trees, it’s better to start small. Although a turtle up a tree can seem a step too far, no one is surprised to see a turtle on a particularly large rock.

Some turtles are also known for clambering on top of each other. When you see a stack of three or four turtles, they’ve had to climb to form that pile. So, many turtles clearly do have some climbing talents.

Turtles who are able to climb trees will do so thanks to their very sharp claws, which can be used to gain purchase on a textured surface.

These big claws can also support their weight, allowing the turtle to slowly and steadily make its way up the tree.

With a textured surface and some patience, the right turtle can make it a good distance up a tree. They do prefer to climb at an angle, so you’re most likely to see a turtle climbing a tree that bends significantly.

It’s also important to remember that not all turtles can climb trees.

Those with smaller claws or heavier bodies will prefer to avoid climbing as much as possible. Turtles are a pretty diverse species, and can still surprise us from time to time!

What’s The Highest A Turtle Can Climb?

Turtles can climb quite high, but it is a matter of patience and commitment that gets them up that far. Some have claimed to see turtles climb as high as 6 foot up a tree.

Turtles aren’t serious climbers, but they are steadfast and dedicated. Given a decent enough surface and enough motivation, a turtle can get pretty high up before being forced to stop.

It’s a matter of grip and balance. A turtle needs a surface with enough footholds for the claws to get a grip. But they also need a weight and width to support the slightly bulky shape of the turtle.

You’re unlikely to see a turtle climb very high on a vertical surface, but these impressive creatures might surprise you with just how high up they can go.

The species of turtle you’re most likely to see climbing a tree is the box turtle. This animal has been observed climbing trees in the wild and has the claws to get pretty high.

The Indochinese box turtle is the turtle most well-known for its tree climbing abilities.

These have quite small bodies with longer legs, giving them a better balance on tricky surfaces. They also have large front claws, which they use to grip the tree bark.

If you see an Indochinese box turtle climbing a tree, it’s probably in search of fruit.

Another advantage of the big claws of the Indochinese box turtle is the ability to flip over should they land on their backs. Helpful, in case of falls!

Musk turtles are great climbers and have been spotted resting pretty high up trees. Those who own pet musk turtles have sometimes noted that if an enclosure isn’t up to standard, the musk turtle will try and climb its way out.

A smaller plastron could be the key to the musk turtle’s climbing ability. This allows the turtle a slightly larger range of motion, which could help them tackle tricky tree climbs.

Musk turtles have been known to get quite high up trees. In fact, if you’re walking in musk turtle territory, watch out for them falling from above! 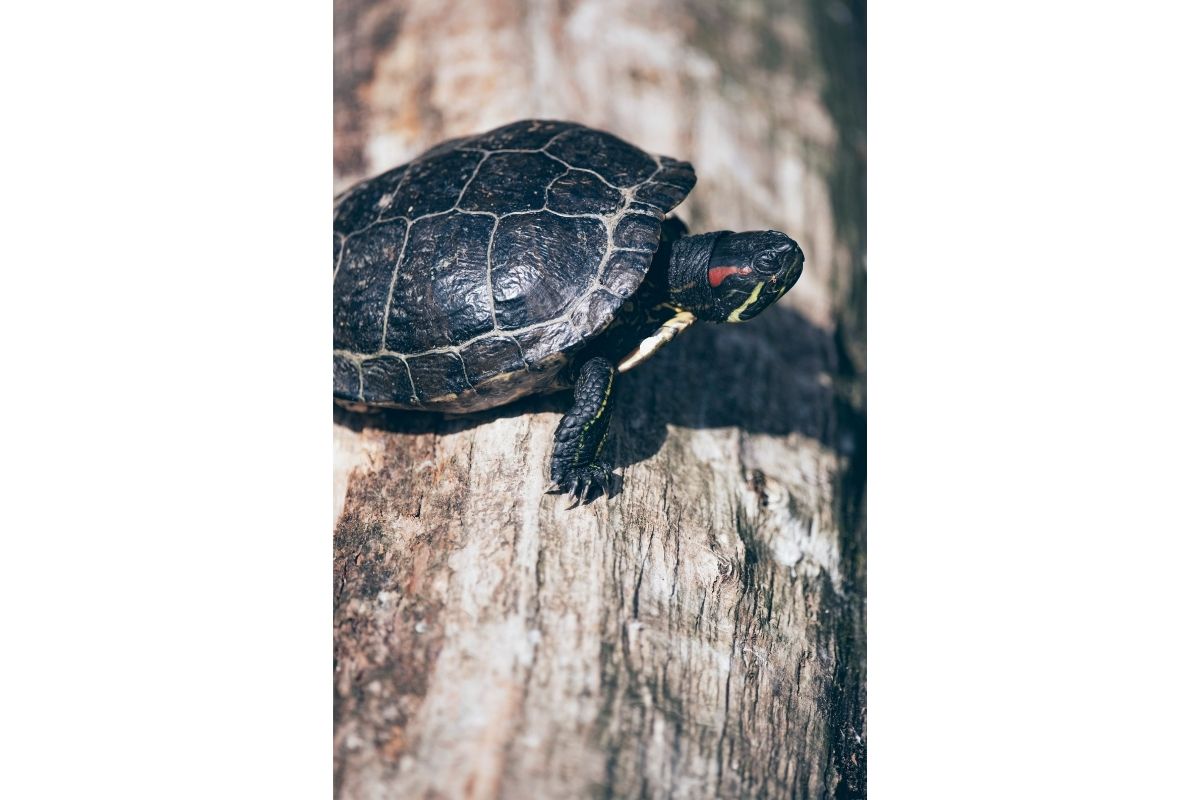 The red-eared slider turtle is semi-aquatic, and can spend over a week away from the water.

Because of this, it’s very important a red-eared slider turtle has a suitable basking area. But you might find they choose to use their basking spot as a climbing frame.

Climbing is a common behavior of the red-eared slider turtle, although they rarely gravitate toward great heights.

But if they find a good surface to climb, they can travel a decent distance. In the wild, a red-eared slider that can’t find a mate will follow its nose to a new home. This curiosity might be what sends them up trees.

You aren’t very likely to see a snapping turtle try to climb a tree, but they do have sharp front claws that can make it possible.

The snapping turtle spends a lot of its day in the water and is known for having a volatile personality on land. So, it probably won’t try to retreat up a tree if feeling threatened.

However, the snapping turtle is known for being quite curious, and it definitely isn’t a shy creature. With those big claws providing some grip, a snapping turtle might try and conquer a tree if it encroaches on their habitat.

Like the snapping turtle, the map turtle can climb, but it isn’t the most expected behavior.

However, the map turtle is an avid basker, and will seek out the perfect area to sit and soak up the sun. If that spot happens to be up a tree, they might put their strong claws to use, and make the climb.

Can Tortoises Climb Trees As Well?

Tortoises love to climb, often to the frustration of their owner! Curious tortoises can both climb and dig, exploring in the wild and their enclosures.

Although tortoises won’t make themselves at home in the trees, they will head up there if it seems appealing.

Is It Safe For Turtles To Climb Trees?

Turtles can climb trees, but it isn’t always the safest place for them to be. A moment of wrong footing can result in a stumble, causing the turtle to come crashing down.

Turtles that can climb trees typically have a combination of good grasp and balance, meaning falls are unlikely.

But accidents happen, and any turtle climbing a tree is putting itself at some risk. A small fall is unlikely to cause any real harm, particularly if they land on a soft surface.

However, a fall from a height can result in a damaged shell or cuts to the limbs. In some cases, if the turtle falls on its back, it might struggle to right itself.

It might not be where you expect to see them, but many turtles can climb trees. They might do this to search for food, hide from predators, or simply out of curiosity.