Snapping turtles are a fascinating species, with the alligator snapping turtle being considered the most dangerous turtle species in the world.

These turtles are often considered modern day dinosaurs thanks to their rugged rigid carapace (shell) and characteristic beak-like mouths.

As a result of this, it’s important to understand this species to maintain the numbers in the wild. The best way to do this is to protect its habitat and range. 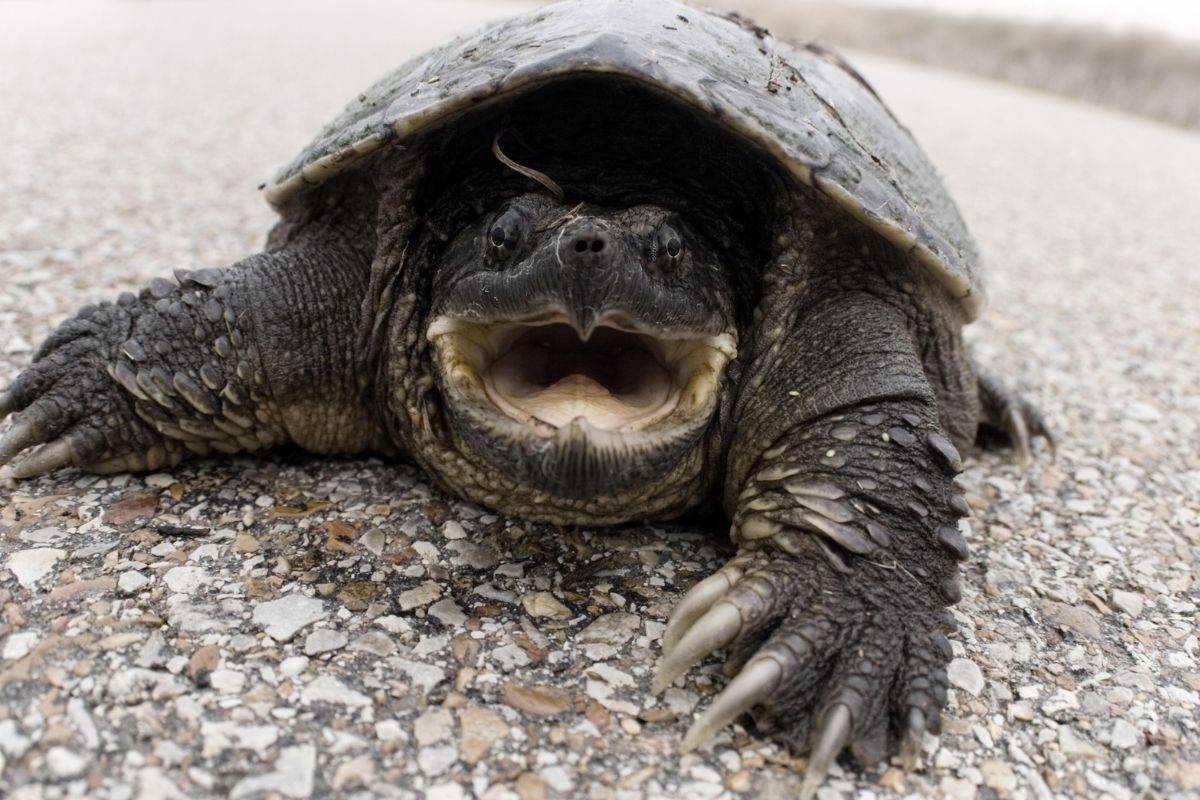 Before we go into where you can find snapping turtles in the wild, let’s take a look at the two types in the species.

The common snapping turtle is (obviously) the most common of the two snapping turtle species. These turtles can weigh anywhere from 4.5-16 kg and can grow to lengths of 10-19 inches, with an average life expectancy of between 30 and 40 years.

They are known for moving their neck outwards and sideways at fast speeds, allowing them to bite and grab prey with their extremely powerful beak-like jaws.

Interestingly, the common snapping turtle is an ambush predator, meaning they don’t actively seek out their prey. Instead, they will linger at the bottom of the water with their beak-like jaws hanging open.

Their tongues possess a worm-like extension that draws in unsuspecting prey, allowing them to bite and eat their prey within seconds.

The alligator snapping turtle can weigh between 8-80 kg with an average length of around 14 to 32 inches. They have an average lifespan of 20 to 70 years.

Alligator snapping turtles look distinctly more rugged than common snapping turtles. They get their name from the large spikes on their tough carapaces, making them look similar to alligators.

Their necks don’t extend like a common snapping turtle, but their jaws and heads are significantly larger and more powerful.

Sadly, the only predator of the alligator snapping turtle faces is humans. These prehistoric reptiles are sold for their meat and shell, selling such parts amongst the illegal exotic pet trade.

Their depleting figures in the wild is also a direct consequence of habitat destruction.

It goes without saying that you should never attempt to handle a snapping turtle of either kind in the wild, unless you are a professional reptile handler with good intentions.

To say these turtles are strong is an understatement – from their muscular build to their powerful jaws.

The last thing you want is to come into contact with a snapping turtle’s jaws, because they have the ability to easily break bones – from fingers to arms.

As a result of their fierce and predatory nature, it’s imperative that you don’t attempt to hold a snapping turtle in the wild.

They are highly territorial of their habitats, and they will become even more aggressive when taken out of the safe zone in the water.

The only reason to handle a snapping turtle in the wild is if you find one in danger. For example, while it’s not a common occurrence, you might find a snapping turtle on the side of the road basking in the sun.

This is because they need to regulate their body temperature in the heat.

If the snapping turtle is at risk of being run over by other cars, then you’ll need to make sure it gets back to the water safely. It’s recommended to call the local wildlife authorities to get an expert to move the turtle.

Where To Find Snapping Turtles In The Wild

So, now we know what a common snapping turtle is, but what is its range and habitat?

The native range of a common snapping turtle is across Eastern and mid-North America, including southern Canada, Nova Scotia, Florida, and all the way to the Rocky Mountains.

This species has also been introduced to parts of Asia, including Taiwan, Japan, and China.

It’s also known for common snapping turtles to be found across Mexico and parts of South America, which is probably down to their conservation status (‘least concern’).

As for its habitat, the common snapping turtle can be found in most freshwater habitats. This includes ponds, rivers, lakes, marshes, creeks, backwater sloughs, estuaries, swamps, and wetlands.

Thanks to their smooth yet rugged shell, it’s so easy for common snapping turtles to be mistaken for rocks on the freshwater floor bed.

Still, this species is likely to hide in the shadows and darkened parts of water, as the low visibility helps them camouflage into the habitat.

Common snapping turtles are predominantly aquatic turtles, meaning they spend most of their time in the water.

However, as they are reptiles that need to regulate their body temperature, they will sometimes leave the shallows to bask on a riverbed or even a nearby road.

Interestingly, adults are more likely to linger in the depths of deeper water habitats such as lakes and large rivers, while juveniles tend to stick to shallow water like creeks and streams.

When it comes to breeding season, the females will retreat from the water to lay their eggs on land. However, snapping turtles aren’t particularly maternal reptiles, so they won’t defend their young once the eggs have hatched.

The moment all the eggs have hatched, baby snapping turtles are left alone to fend for themselves.

Where To Find Alligator Snapping Turtles In The Wild 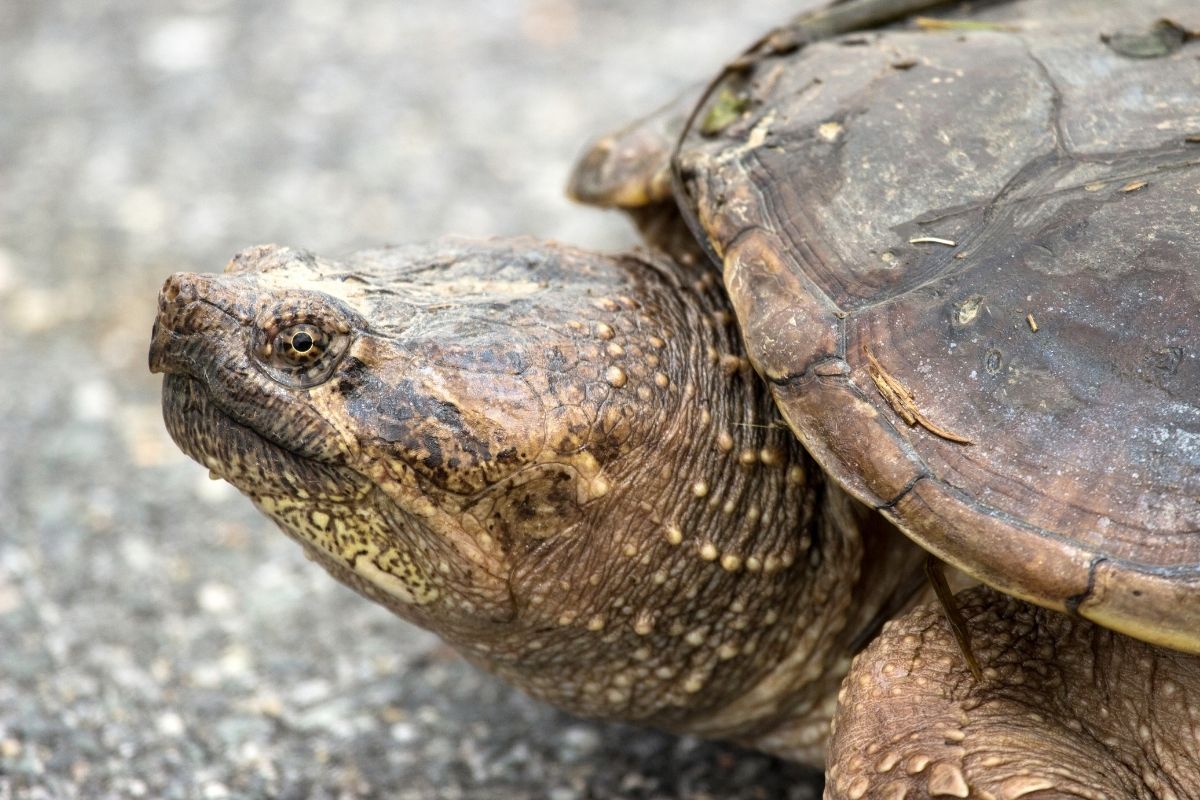 The alligator snapping turtle shares a similar range to its common counterpart, but they are less easy to find in the wild due to the depleting figures in the wild.

This is also due to their extremely rugged appearance, making them blend into their habitats with ease.

The range of the alligator snapping turtle is across Eastern and Mid-Western North America, including southern Canada all the way to Florida, and as far west as Texas. They typically reside in water that drains into the Gulf of Mexico.

The habitat of an alligator snapping turtle is much the same as the common snapping turtle. These turtles live in freshwater habitats, including creeks, rivers, lakes, marshes, swamps, estuaries, and wetlands.

They typically reside at the bottom of the water, hidden in low-visibility lighting waiting for unsuspecting prey to wander close to their mouths.

Just like the common snapping turtle, alligator snapping turtles will only leave the water to bask in the sun or to lay their eggs. Females aren’t maternal in the slightest, happily leaving their hatchlings to fend for themselves the moment they are born.

This could also be the reason for the species’ depleting wild figures, as juvenile alligator snapping turtles are considered prey amongst larger reptiles and birds.

What U.S. States Can You Find A Snapping Turtle? 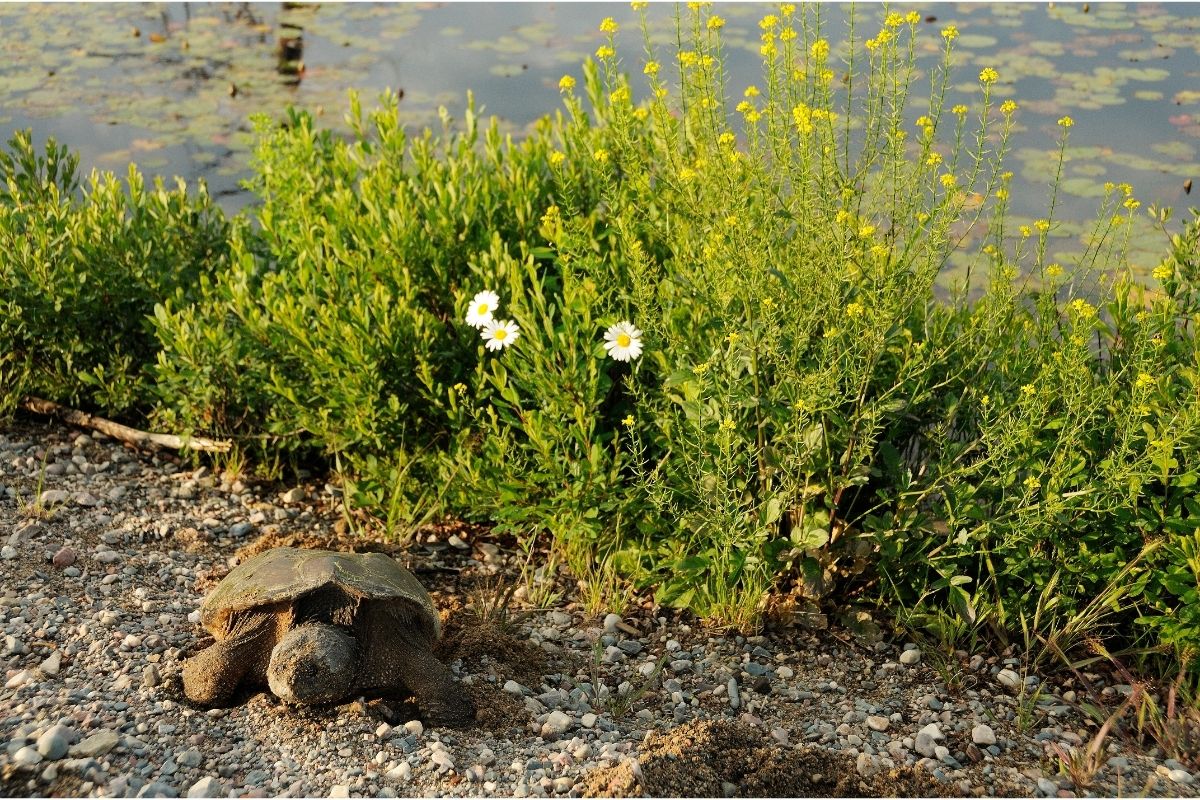 The reason why it’s so important to understand the natural habitat of both the common snapping turtle and the alligator snapping turtle is to make the effort to protect the species.

Snapping turtles, like most wild animals, are directly threatened by habitat destruction and loss.  Freshwater habitats are most likely to be destroyed by pollution, littering, and species extinction.

While snapping turtles are aquatic scavengers that will eat just about anything that wanders into their jaws, species of fish and aquatic plants continue to deplete, meaning there is less food for the turtles.

Another factor that contributes to the conservation status of snapping turtles is a decline in their reproductive population.

While snapping turtles aren’t maternal and won’t care for their young, research suggests that reproduction is becoming less frequent due to climate change.

When the water is either too warm or too cold, the snapping turtles will fall out of sync with nature. They won’t eat food when it’s too cold (as they struggle to digest it), and the ever-warming months knock the species out of their breeding season.

So, there you have it! Turns out, snapping turtles can be found in virtually any freshwater habitat in Eastern and Mid-Western North America.

This is a fascinating species that should be treated with respect at an arm’s distance – so refrain from handling them without the help of a professional.