The slowness of turtles (on land that is) makes it seem as if they must have capacities beyond the physical that exceed those of other creatures, capacities like awesome night vision, but is this assumption actually correct?

Can turtles see in the dark, or are they largely inactive when the sun goes down?

In this article, we’ll be answering these questions in full, giving you an opportunity to bone up on your turtle trivia, and perhaps even learn how to care for them better if you ever invite one to become part of your pet family.

But before we get into the nitty-gritty, I see no merit in burying the lead here, so I’ll answer the key question now!

Yes! Turtles can indeed see in the dark, but to say they have top-notch night vision isn’t quite right.

They can make out objects and get from A to B, but their sight after dark is nothing compared to, say, a cat or an owl.

In terms of the quality of their night vision, turtles aren’t a far cry from us humans. They can basically see as well as we can see in the dark, and like us, some turtles can see better at night than others.

They also have an essential adjustment period, just like us.

If they’re suddenly shrouded by darkness, they won’t be able to see anything, but after a few seconds of iris acrobatics and pupil dilation, their peepers can gather just about the right amount of light to get by.

There is, however, one major difference in the way humans and turtles see by moon and starlight… turtles see red!

That’s not to say that when the sun sets, turtles become enraged and aggressive (although that would make a dope horror flick). What I’m saying is that they literally see red!

Do Turtles Have Better Night Vision Than Humans?

The thing that enables nocturnal animals to see in the dark is known as Tapetum Lucidum. Tapetum Lucidum is a retroreflector that enhances acuity in poor lighting conditions.

You know when you see a cat at night, and they appear as two spooky shining eyeballs floating in the darkness?

Well, Tapetum Lucidum is responsible for that iridescent twinkle. It’s essentially an organic mirror deep in the eyeball that enhances light-gathering potential.

Unfortunately, humans don’t have these nifty internal eye mirrors, but does that mean turtles can actually see a bit better than us in the dark?

Nope, because they don’t have these light-enhancing mirrors either, but how do we know this?

There’s actually a very easy method of figuring out if an animal has the gift of Tapetum Lucidum. All you have to do is pop the flash on your camera, dim the lights, and snap a shot of the critter in question.

If the picture shows their eyes to be bright and shiny, it means that they do indeed have Tapetum Lucidum.

If their eyes are dull, then they do not. If you take a snap of your turtle’s eyes using this method, you will notice that there is no twinkle whatsoever, as they do not have this handy sub-retinal mirror.

As such, the chances are that turtle and human night vision is fairly limited in the same ways, but does that mean we should be leaving our aquarium lights on all night?

Aquarium Night Light: Is It A Wise Move? 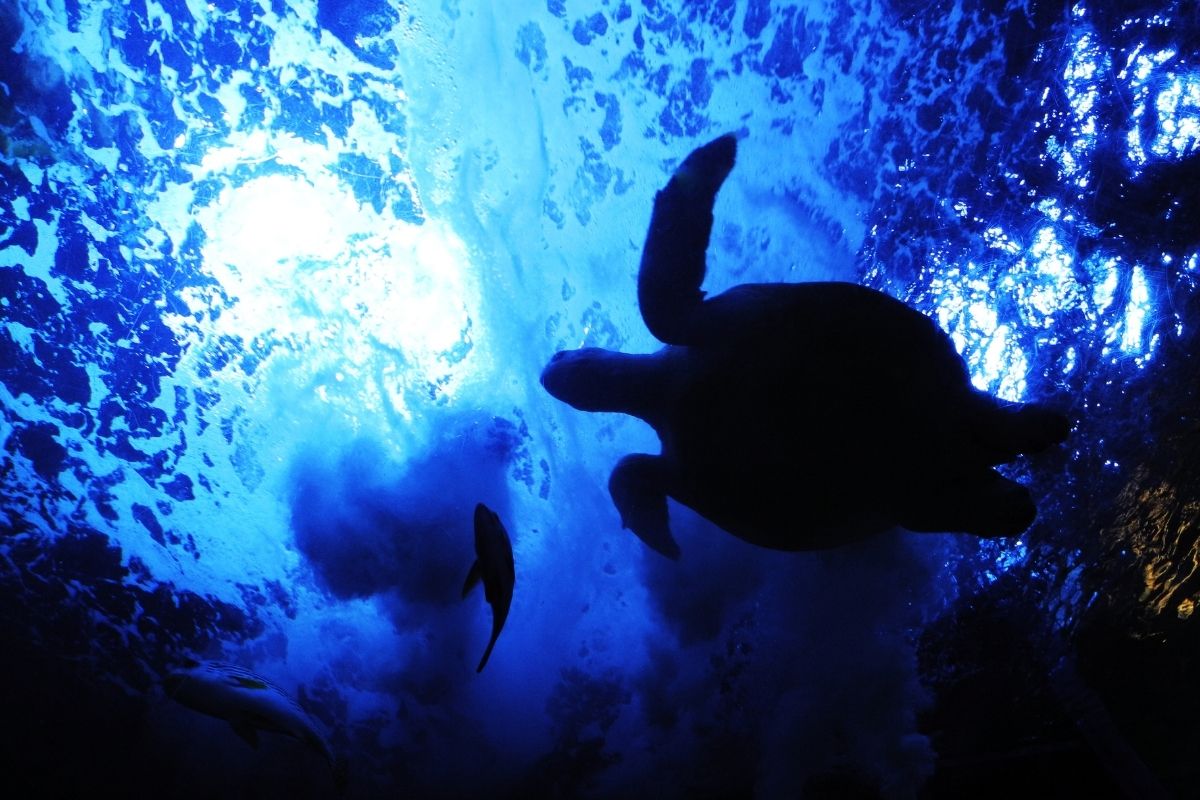 As we’ve discovered that turtles can’t see all that well at night, naturally, we’ll want to make life easier for them by providing a nightlight, but, although we mean well, this is a bad move.

How do you sleep when there’s lots of bright light around? Not too well, right? Well, it’s the same for turtles.

They need darkness to find rest and sleep, just like we do. Keeping aquarium lights on all night will make it harder for them to wind down and doze off.

Eventually, they will become stressed, which can lead to some pretty severe health complications, so the best thing for both you and your turtle is to embrace darkness.

That’s not to say that you can’t keep a light on in certain instances.

If, for example, you really need to monitor your turtle due to an existing health issue, a mild light isn’t out of the question, as long as it’s turned off as soon as possible.

You can also keep the light on as long as your turtle is feeling active and adventurous, but when they’re clearly tuckered out, it’s time to turn off that light, and say goodnight.

What About Underwater Vision?

The depths of a body of water are, needless to say, pretty dang dark, and as we know, turtles love a good swim, but if they have human-ish optics, how are they finding their way around down there?

It’s a good question because it doesn’t take a genius to observe that turtles have no trouble navigating underwater, even at depth.

The reason they can see so well when submerged in comparison to how we see when we open our eyes underwater has nothing to do with eyesight quality, but eye construction.

Humans, of course, have rounded corneas, a shape that helps us see quite well in broad daylight, but not underwater — things get real fuzzy, real quick.

Turtles, on the other hand, have level corneas paired with curved lenses, a system that refracts light incredibly well underwater.

In fact, this optical matrix works so well in water that turtles can likely see as well as we can on dry land when they’re submerged.

They also have a means of dealing with the irritation of the water and pressure.

They have the ability to produce tears of mucous that collect and spread to form a  protective barrier that keeps water content and debris from harming their eyes.

In the absence of irritation, the only factor that can hamper their submarine vision is debris. Dirty water can really limit a turtle’s eyesight. This is just one more reason why it’s essential to keep your pet turtle’s habitat clean.

Why Do Turtles See In Shades Of Red At Night?

The redness gene, or if you want to get scientific about it, CYP2J19, is the cause of a turtle’s ruddy worldview after dark. This gene has been passed down through generations and evolutions for millions of years.

Scientists believe that the earliest living thing to develop it was a truly Frankensteinian dinosaur that supposedly had the body of a large croc, a turtle’s stomach, and a pig’s snout — freaky!

Birds also have the “redness gene” in spades.

Are Turtles Active At Night?

While turtles certainly aren’t nocturnal creatures, they’re often active at night both in the wild and in captivity.

In the wild, certain species of female turtles will nest on beaches at night, and turtles in aquariums may explore their environment. Some turtle species enjoy foraging at night, but ultimately, they are still classed as diurnal animals.

Do Turtles Have Good Hearing?

Turtles do not have great hearing as their auditory system is extremely rudimentary. They have neither eardrums nor tympanum. They have an auditory spectrum of 200–750 Hz.

There you have it — turtles can see in the dark, but they do not have night vision.

Their vision is very similar to our own but for the red haze imparted by gene CYP2J19 that they likely inherited from some strange hybrid dino of long bygone days. Interesting, huh?