When you picture a turtle, do you see them in your mind’s eye with ears? No, right? That’s because they don’t have any external body parts indicative of an auditory system, but does that mean they can’t hear?

Contents hide
1 How Do Turtles Hear If They Don’t Have Visible Ears?
2 Turtle Hearing On Land
3 Is A Turtle’s Hearing Better Underwater?
4 Do Turtles Hear And Enjoy Music?
5 Other Essential Turtle Senses
6 Do Turtles Communicate?
7 Will Turtles Try To Communicate With Humans?
8 Frequently Asked Questions
9 Final Thoughts

That’s exactly what we’re going to explore in this article. 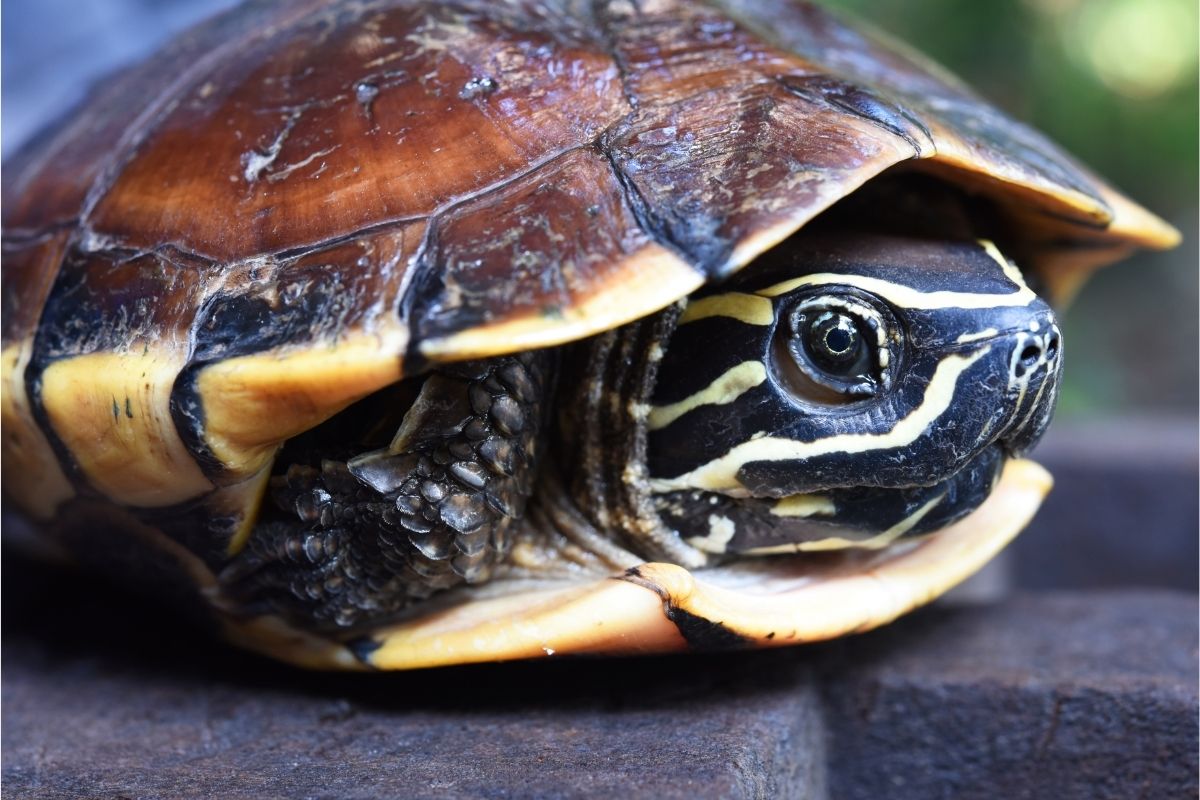 I’ll be doing a deep dive on the hearing facilities of our little shelled friends, but to answer the key question quickly, yes, turtles can indeed hear, and they do have ears.

That said, despite having eyesight that’s pretty much on par with humans’, their hearing is not quite as sharp as ours. In light of this, they rely quite heavily on their other senses to hunt, scavenge, and generally survive.

How Do Turtles Hear If They Don’t Have Visible Ears?

Although we humans don’t have the best hearing in all the animal kingdom, we do have some pretty extensive hardware hanging from the sides of our heads.

However, most of the real work goes on inside the inner ear, and the same is true for turtles.

They may not have fleshy flappy things on their head, but their internal ear is fully formed and highly capable.

Sound reaches these inner mechanisms via holes in the side of their heads, they work their magic, and voilà; the turtle can hear!

Now that we’ve narrowed our inquiry down with a general answer, we can dig a little deeper and get more specific.

For instance, is there a difference in acuity between a turtle’s hearing when it’s on land and underwater? 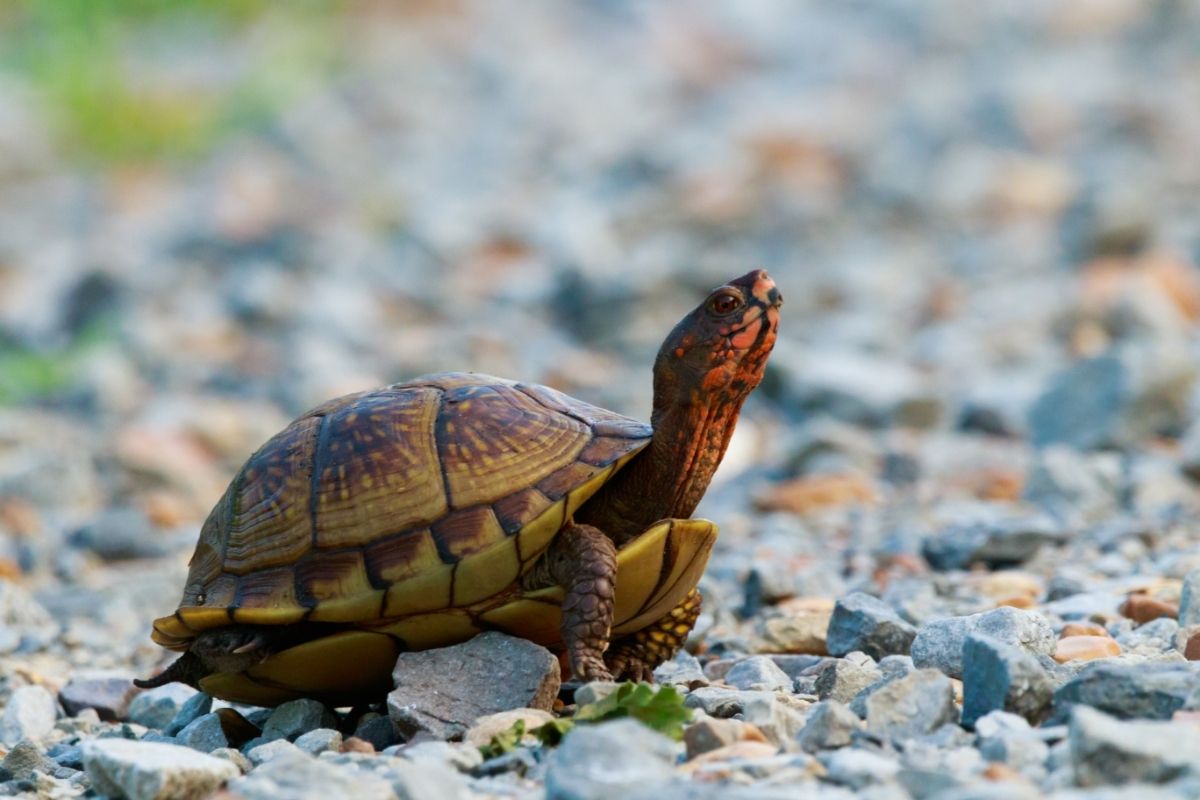 When turtles are having a crawl about and basking in the sun on dry land, their hearing is particularly limited.

For instance, unless a predator or prey is being particularly clumsy and loud, they likely wouldn’t hear them.

In these situations, instead of their sense of sound, turtles utilize their receptiveness to vibration and changes to air pressure in the environment to identify danger or a chance to hunt.

They’re more attuned to bass frequencies than they are to treble frequencies.

As most every-day sound is generally quite high on the audio spectrum (leaves rustling, water trickling, twigs snapping), they really don’t take in much of what goes on around them.

But is this the same when they take a dip? Let’s press on and find out!

Is A Turtle’s Hearing Better Underwater?

Part of the reason that turtles don’t hear so clearly on dry land is the lack of external ears, and their thick, fatty necks, but these are the very reasons why, when submerged, they hear really quite well!

That fleshy neck of their transforms into a highly efficient auditory conductor as soon as they’re fully submerged, and the holes in their ears make them highly sensitive to changes in water pressure.

Although, as discussed a moment ago, they are capable of reading fluctuations in air pressure, a turtle’s ability to track fluctuations in water pressure is through the roof (or should I say shell?).

Remember when I said that turtles are more receptive to lower frequencies?

Well, that plays a role here as well, as high frequency noise gets filtered out by the density of water pretty quickly, leaving only the lower end of the spectrum to continue traveling.

It’s a combination of these factors that allows a turtle to give predators the dodge, and track and kill its prey.

Note that all studies in this area thus far have been carried out on mature turtles, so this may not apply to juveniles.

Also, to put these frequency ranges in a bit of perspective, humans can typically hear frequencies between 20 and 20,000 Hz, so there’s a BIG difference there.

Now, I don’t know about you, but my next question is about how turtles perceive music. Can they hear it? Do they like it? Read on for more turtle action!

Do Turtles Hear And Enjoy Music? 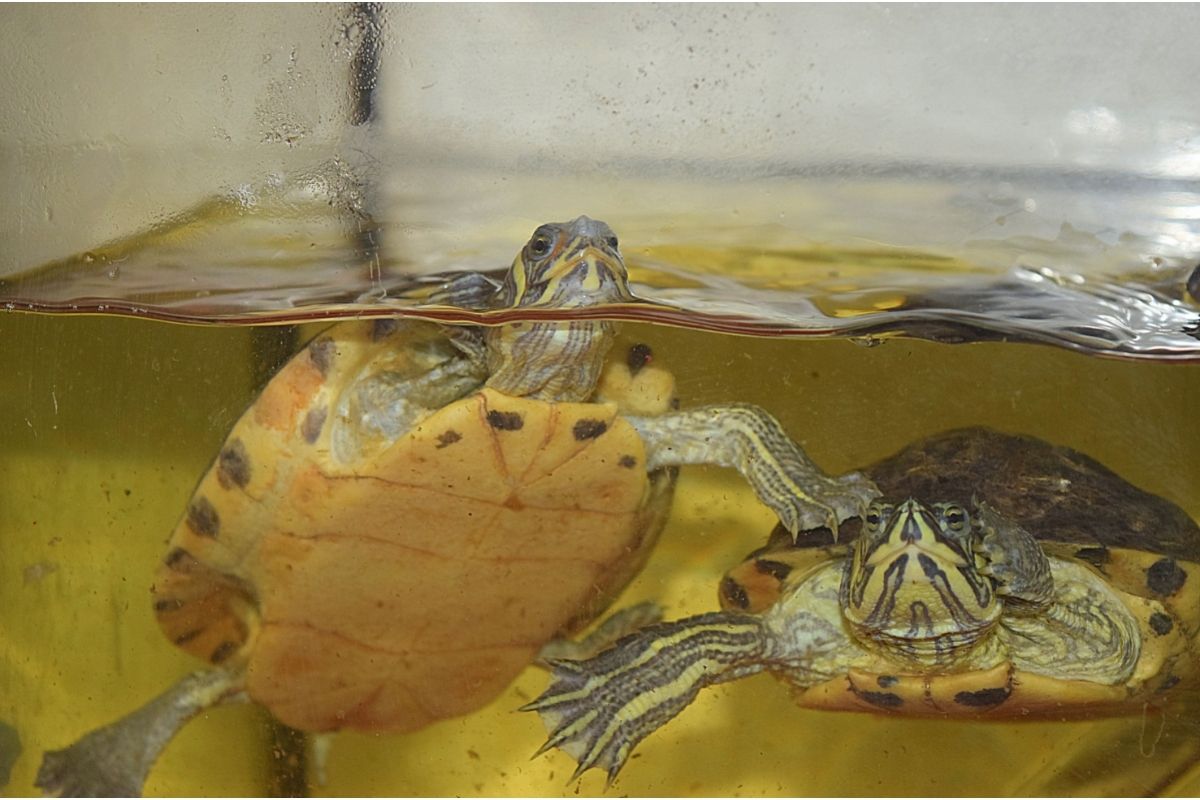 We’ve already touched upon the fact that turtles can only hear lower frequencies well, so while they might not be able to hear your favorite ABBA tracks all that clearly, they’ll definitely pick up on some dirty drum and bass or dubstep.

In terms of instruments, turtles won’t be able to hear things like flutes or violins, but cellos and basses will be right up their ear hole alleys.

Will they enjoy these low-end instruments and compositions? Well, it’s hard to say. It’s clear that animals don’t perceive organized sound in the same way humans do.

To turtles, music will simply be a bunch of odd fluctuations in air pressure. They won’t appreciate the notes. They might get a sense of the rhythm, but not in a musical way.

So it’s bad news I’m afraid… you won’t be able to make your turtle throw shapes to your favorite bass-laden bangers, but they will be able to hear them.

Now let’s look at a breakdown of all 5 of a turtle’s senses. We’ve established that hearing really ain’t their thing, but they do excel in some sensory departments. Check it out.

We’ll start with what we know already. Turtles don’t have the most impressive hearing, especially on land, as they don’t have any ear drums, or any external hardware for that matter. However, they do hear quite well underwater.

Human and turtle eyesight is just about on par, although turtles see things with a red hue thanks to the CYP2J19 redness gene passed on from times when dinosaurs roamed the land.

Like us, they cannot see very well in the dark, but after a few minutes of adjustment, they can make out enough to get by.

Much like their hearing, their sight is great when underwater, an area in which they have us humans well and truly beat. That said, turtles don’t have very good peripheral vision.

Despite not having protruding noses, turtles have a great sense of smell.

Scent travels into their system through bumps beneath their chin, and they use this acute sense to hunt, escape predators, and locate female turtles via their pheromones when mating season comes around.

The absence of these tongue receptors can often lead to a turtle eating toxic items.

Luckily, some turtles are immune to food that is considered poisonous to many other life forms. Some of these resilient snackers include the Leatherback and the Hawksbill.

Although turtles appear to have very leathery, callus skin, they’re surprisingly receptive to touch, which is why turtles kept in captivity may enjoy the odd neck scrub.

With such poor hearing, you may be wondering how turtles communicate with one another.

Do they use their other more advanced senses, or do they find a way to navigate their auditory issues and communicate in a similar fashion to humans?

Well, it’s the latter that seems to be true. Although gestures may well be one means of turtle communication, they mostly engage with their mates and young using exceedingly low frequency sounds.

Obviously, turtles do not have any form of organized language, and they do not speak, but through these low noises, they seem to be able to communicate effectively.

In fact, it’s thought that female turtles can even use these sub sounds to communicate with an unborn offspring — pretty neat, huh?

Will Turtles Try To Communicate With Humans?

If only we could speak directly to our turtles, Dr. Doolittle style, but unfortunately, there is no turtle option on DuoLingo.

That’s fine though, as although we can’t talk to our beshelled buddies, we can understand how they’re feeling by examining their body language.

For example, if they retreat into their shells, it’s clear that they’re frightened or feel threatened.

If, on the other hand, your turtle tries to get your attention and play with you, you can tell it’s hungry or in good spirits.

You will become more fluent in these signals the longer you and your turtle spend together. If you notice any sudden changes in their behavior, it’s best to contact a vet, as it may be a sign of illness.

Can Turtles Hear Their Owners?

Yep, most of the time, turtles can hear your voice. Not just that, but they will actually learn your voice, and it will perhaps even provide them comfort to hear it.

Conversely, if you have a particularly high voice, your turtle may have trouble picking everything up.

Can Turtles Understand You?

Turtles can’t really understand us, but they’ll learn from experience what certain actions and sounds indicate.

What Sounds Do Turtles Make?

As turtles don’t have vocal cords, they can’t be all that articulate with their sounds, but with that in mind, they do have a surprisingly broad repertoire of noises.

Turtles can hiss, croak, moan, honk, grunt, and sometimes they may even squeal.

The key takeaway here is that turtles don’t have great hearing on land, as their auditory systems are optimized for hearing underwater.

This, combined with 4 other rather impressive senses helps them to survive in the wild.