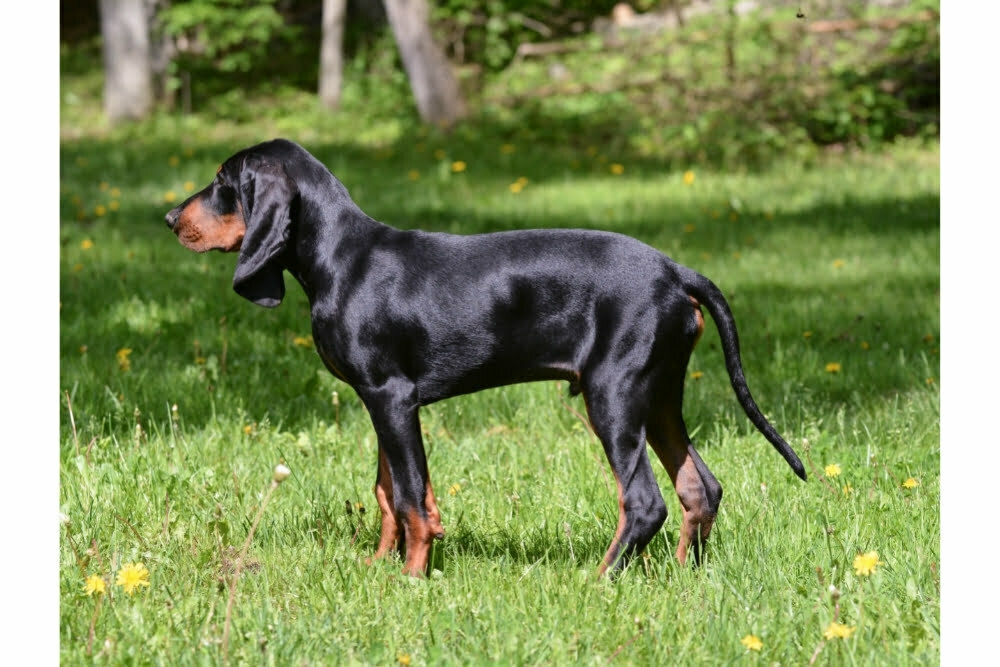 As a breed, coonhounds are calm and understanding with intelligent and loving characters.

Though they can be stubborn and independent, once they have formed a bond with their owners they become much more affectionate.

They are a great addition to active families because as hunting dogs, they love spending time outdoors.

With gentle temperaments, they enjoy cuddling and they are also good with children as they are protective without being intimidating.

It is worth noting that coonhounds are known for their deep and loud voices which may be problematic depending on how close you are located to your neighbors.

If you are looking for an excellent family pet, that is active but gentle too, a coonhound could be the ideal breed for you.

Do coonhounds need a lot of exercise?

Yes, coonhounds have quite demanding exercise needs. As a hunting breed, they require plenty of exercise.

Daily, a 20 to 30 minute walk is likely to suffice, however, you should exercise them more intensely throughout the week.

When given plenty of exercise they will be happy to cuddle up and sleep next to you, however, if they are not exercised enough they are likely to become bored and they may express these feelings of boredom through destructive behavior.

Aside from land based exercise, many coonhounds also enjoy swimming hence why they are considered to be the perfect breed for active families who enjoy participating in physical activity.

Adult Treeing Walker Coonhounds require around 2 hours of training and physical activity daily to burn off their energy.

There are many exciting activities that you can do to exercise your dog. From walking and hiking to lure coursing and agility trials.

As hunting dogs, their instincts will often tell them to chase smaller creatures, however, they generally get on well with other dogs and humans too. If they are going to be housed with other pets, ideally, they should be raised together.

If used for hunting, then you should expect them to display aggressive tendencies towards their prey. Also if they feel provoked then they may show signs of aggression, however, they aren’t known to be a breed that is prone to biting.

Treeing Walker Coonhounds can be a bit wary around strangers so you may find that they bark initially, however, this isn’t a sign of aggression, but rather a warning to you that others are in your company.

Generally, coonhounds are known to be easy going, good natured dogs that are also quite outgoing.

Though they may appear a tough breed, you will actually find that coonhounds can be quite sensitive, so it is easy to hurt their feelings. They are also really expressive.

Though they have short haired coats, coonhounds shed, possibly more than you would expect. Black and tan coonhounds are known to be especially heavy shedders and as a breed coonhounds typically have a strong dog odor.

This is because they are bred as outdoor dogs so their coats have quite a lot of odor causing oils in them.

Although the purpose of these oils is to repel dirt and water, they can often leave them with an unpleasant smell. The wrinkles in their skin can also trap dirt particles and moisture which may worsen this odor.

You may find that this odor never really goes away despite the efforts that you apply to grooming and bathing them.

To help reduce the noticeability of the scent, it is recommended that you wash your coonhound at least once a month using an odor reducing shampoo.

You will likely find that the shampoo eases the smell for a short period of time but doesn’t completely remove it. After a couple of days, you may notice that it has reappeared.

How much does a redbone coonhound puppy cost?

Redbone Coonhounds are a breed that originates from the USA. They are excellent companion dogs with friendly personalities, although they do require a lot of exercise.

As a popular breed, Redbone Coonhounds are often sought after for their speed and agility skills.

You should expect a redbone coonhound puppy to cost anywhere between $700 to $900 with the average price being around $600. Despite this, you will find some puppies that cost around $1200.

The price of a redbone coonhound puppy is typically a reflection of the breeder’s reputation and the bloodline of the puppy. If it was born by two purebred parents, you will typically find that it costs quite a bit more.

Some breeders you will find, charge more or less than the price we have mentioned above. In this instance, it may be worth questioning why they are being sold for that price.

Why is it called a coonhound?

Coonhounds have their name from their hunting practices which involved raccoons.

Whilst black and tan coonhounds, in particular, are predominantly used for hunting raccoons, others don’t solely specialize in this and instead are used to hunt foxes as well as raccoons and other types of prey.

As a member of the hound group, a coonhound is a type of scenthound.

The black and tan coonhounds were originally bred in the United States from strains of a bloodhound and a foxhound.

The first breed to be officially registered was the black and tan coonhound. Treeing Walker Coonhounds earned their name courtesy of their ability to trail faster than the other species of coonhounds, often chasing their prey into the trees until their hunter arrived.

Each breed is recognized for sharing similar personality traits with a very similar melody to their voices.

Despite there being several different species of coonhounds available they are all united by their name which signifies their ability to hunt for a raccoon by its scent. They can be used to hunt individually or as part of a pack.