Turtles are super interesting creatures that have a lot of unique features that make them stand out in the animal kingdom.

From their slow movements to tough shells, a lot of people would easily be able to pick out a turtle in a zoo – but if you were to ask them if turtles have teeth, they would definitely hesitate to answer.

Do turtles have teeth? They must so they can eat, right? But if they don’t have teeth, how do they chew their food? What do turtles even eat? 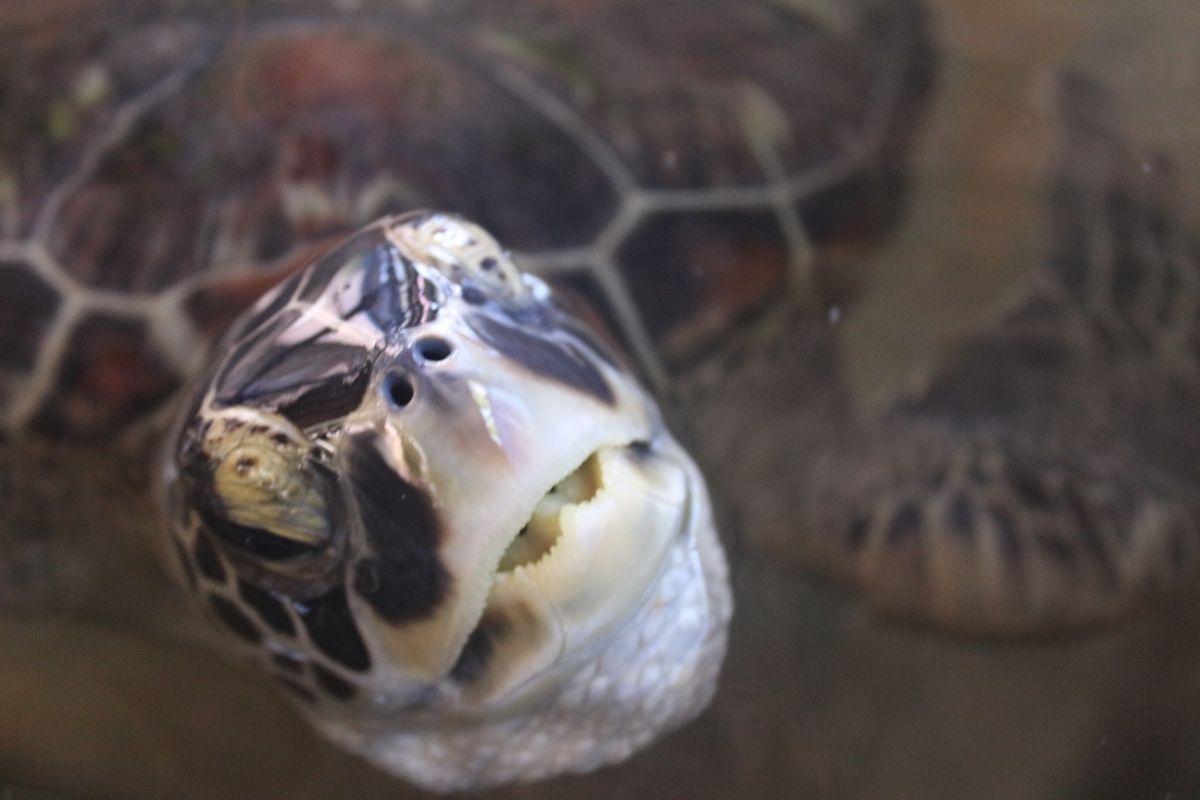 If these are questions that have been floating in your mind for a while then don’t worry – we have all the answers right here.

We are going to be taking a closer look at the anatomy of turtles around their jaws and mouths to see if they have teeth and how exactly do turtles eat.

So, if you want to find out the answer, then keep on reading the information below!

So, Do Turtles Have Teeth?

Let’s get the main question out of the way – do turtles actually have teeth?

Well, with around 318 different species of turtle out there in the world, there’s bound to be a bit of variety when it comes to their anatomy, but strangely, one thing all turtles have in common is that they do not have any teeth at all.

In fact, turtles’ close relatives, including tortoises and terrapins, also have no teeth. They don’t have gums either, but they do have a tongue – but inside their mouths, there is not a single tooth to be found.

However, some turtles do have features that act similar to teeth but they are not actually teeth.

Teeth are made from enamel and contain nerves and blood vessels, plus they can fall and grow back (depending on how many sets the animal has) although they cannot heal from damage like bones do.

Turtles have very sharp beaks like a bird although not shaped in the same way. Instead, turtles have incredibly powerful jaws that can bite down to break up their food.

Some turtles’ jaws are so powerful that they can crush through the shells of other animals like crabs and lobsters so they can eat the flesh underneath.

This means that if a turtle tries to bite you, it will definitely still hurt even if they don’t have teeth.

The best example of this is the snapping turtle. This type of turtle is especially renowned for its aggression when it comes to biting but even they don’t have teeth!

Also, some turtles have jaws that feature serrated ridges, which means that they are zigzagged and these act similarly to our own teeth.

These turtles use these edges to tear up food and even to scrape up algae from hard surfaces (if that is what the turtle eats).

Because the edges of their beak are serrated like the edge of a hand saw, they don’t need to have teeth.

On close exception, you may also notice that some turtles have a pointed edge to their beak that tips downwards.

This is especially noticeable on the Leatherback turtle which uses this point to grip onto prey easier as some of their prey, like jellyfish, can be very slippery when in the ocean.

So, overall, turtles do not have teeth. Instead, they usually have a very sharp beak with a powerful jaw that makes snapping up food and prey super easy no matter their diet.

There is one exception to the rule and that is the very useful egg tooth.

When baby turtles are still in their eggs, they grow a special kind of protrusion from their beaks that are used to help them cut through their egg.

This protrusion is very small but also very sharp, making it perfect to cut through the leather-like interior of their egg so they can break through and be born.

After a few days, the protrusion will fall off as the baby turtle no longer needs it – it is just a little something to help them be born.

This protrusion is called a caruncle and it is technically not a tooth as it is made from keratin (which is similar to what our nails are made of).

But some people refer to it as the ‘egg tooth’ because it acts like a little sharp something for the baby turtles to use to ‘bite’ their way out of their egg.

Really, it should be called the ‘egg nail’ but once it is no longer needed, it just falls out like our human teeth do when we are ready to grow our adult set in. But, unlike humans, turtles do not regrow this ‘egg tooth’.

From that moment on, baby turtles use their sharp beaks and strong jaws to snap up their food and eat – but how can they chew without any teeth?

This is the issue – turtles do not chew their food at all!

Instead, turtles snap up their food and either swallow it whole or rip it up into smaller pieces using the sharp edges of their beaks.

This means that turtles do not actually need teeth at all because their beaks are structured to take care of their food so they can still eat without needing to chew.

Because most turtles are herbivores, meaning that they only eat plants like vegetables and fruit, they just need to rip up their food into smaller pieces and swallow those pieces whole.

Fruit and vegetables are not like prey so turtles do not need to worry about their food running away from them – this means they can sit there content and shred their food to their heart’s content.

Because of this, most herbivore turtles have serrated jaws which work great for ripping up plants.

With carnivorous and omnivorous turtles who also hunt prey and eat meat, these turtles use their sharp beaks to trap prey and strong jaws to crush them.

This means that carnivorous and omnivorous turtles will feature the sharp, downward point rather than serrated edges like their herbivorous cousins. Still, they do not chew their prey and swallow them whole too

Now, swallowing your food without chewing is not a great idea for humans but turtles are especially adept for this because they also have very productive salivary glands.

These glands produce a lot of saliva which makes swallowing food whole a lot easier. The food goes down smoothly and allows turtles to eat most of their food with one big gulp.

The same goes for aquatic turtles. They usually eat their food underwater which makes digestion a lot easier – but this comes with a few problems.

Do Turtles Have Teeth In Their Throat?

If you have ever seen a picture of a leatherback turtle’s throat, you may have thought that it was completely lined with lots of sharp teeth.

However, these ‘fangs’ that coat a leatherback turtle’s throat are not actually teeth.

Instead, they are lots of very sharp spines that act like stalactites of a cave. These spines are actually called papillae and they are designed to trap food as the turtle regurgitates water.

Turtles need to do this because they use seawater to make swallowing their food easier, but they need to spit the water back out without spitting back out their food.

Therefore, these spines are used to cling onto the food so it doesn’t flow out with the water from the turtle’s stomach.

However, this feature comes with a drawback when it comes to plastic bags.

Basically, sea turtles (but leatherbacks in particular) eat jellyfish and the spines in their throats are great for clinging onto the jellyfish so they cannot be regurgitated without being digested.

But sea turtles cannot tell the difference between plastic bags and jellyfish so this often leads them to swallow down a plastic bag after mistaking it for a jellyfish.

The issue is that sea turtles cannot digest plastic bags but due to the spines in their throat, they cannot regurgitate it back up either.

This means that the plastic bag remains in the sea turtles’ digestive system, blocking it and killing the turtle.

So, these spines are still not technically teeth nor are they used to chew up a sea turtle’s food.

Instead, they are to trap food in the stomach of the sea turtle but in modern times, this genius feature that sea turtles have developed for hundreds of years has become a huge flaw.

This is causing sea turtles to die prematurely and their numbers to decrease.

This is why there has been such a huge push in reducing the number of plastic bags we use – because they are responsible for killing so many precious creatures including turtles.

So – do turtles have any teeth at all?

No, there is no species of turtle that has teeth because they do not need them.

Turtles do not chew their food, no matter if they are herbivores or carnivores, and instead have other methods to help them swallow their food in one gulp.

Turtles have beaks instead of teeth and some have serrated jaws that can be used to rip up food with ease.

Carnivorous turtles have a pointed tip that makes it easier to catch onto prey and stop their escape.

Some turtles like leatherback turtles even have lots of sharp spines in their throat which allows them to regurgitate seawater but keep their food within their stomachs.

Turtles also have very strong jaws and salivary glands which produce a lot of saliva, making it easy to swallow their food whole and reducing their need for teeth.

However, baby turtles are born with what many call an ‘egg tooth’ but it is actually a sharp bit of keratin on their heads that fall off soon after they hatch from their eggs.

This means that turtles have no need for teeth and thus, they have simply evolved without them!