The majority of turtles have beaks which are also known as their jaws which continuously grow as the turtle ages.

This is not an issue though because in the wild, the turtle is able to wear down their beak naturally due to the things that they eat.

However, when they are kept in captivity, if they are not given things to chew on the beak can get overgrown and make it difficult for them to grab and eat things.

This means that it is up to the owner to keep an eye on the beak and trim it if it starts to look overgrown.

Some examples of turtles that have beaks are:

Even though the box turtle is technically a turtle, it acts much more like a tortoise because it spends the majority of its time on land than in water.

There are multiple different species of this type of turtle including the Mexican, ornate, spotted, and Coahulian box turtle.

As the name suggests, the snapping turtle is quick to snap at you if they feel threatened as they have a natural tendency to be aggressive.

Their jaws are very powerful, and their beaks can easily slice through your skin and muscles.

On the other hand, this turtle is one of those that does not have a beak:

The black softshell turtle is a bit weird looking because they have a snout with lips instead of a beak and a big leathery shell that is much more flexible than the standard turtle shell.

It is native to India and is very endangered in the wild but through conservation efforts, its numbers are slowly climbing.

A turtle’s beak looks like a small, flat piece of bone with two sides. It is attached to the roof of the turtle’s mouth.

This part of the skull protects the inside of the mouth from injury and allows the turtle to bite down harder when eating.

Why Do Turtles Have Beaks?

Turtles have beaks because they feed on hard foods such as shells, bones, and coral. These foods require a lot of force to break apart.

To get these pieces into their mouths, the turtle uses its beak to crush and cut the food.

A turtle also uses its beak for other purposes. For example, it may use its beak to dig in the sand or soil to find worms, insects, and other animals.

When a turtle digs, it pushes its beak into the ground and pulls out dirt and debris. Then, it uses its tongue to collect any food items found during digging.

Do Turtles Have Teeth?

Turtles do not have teeth but when they are young, they have a tooth known as an egg tooth which is located on the front of the beak. 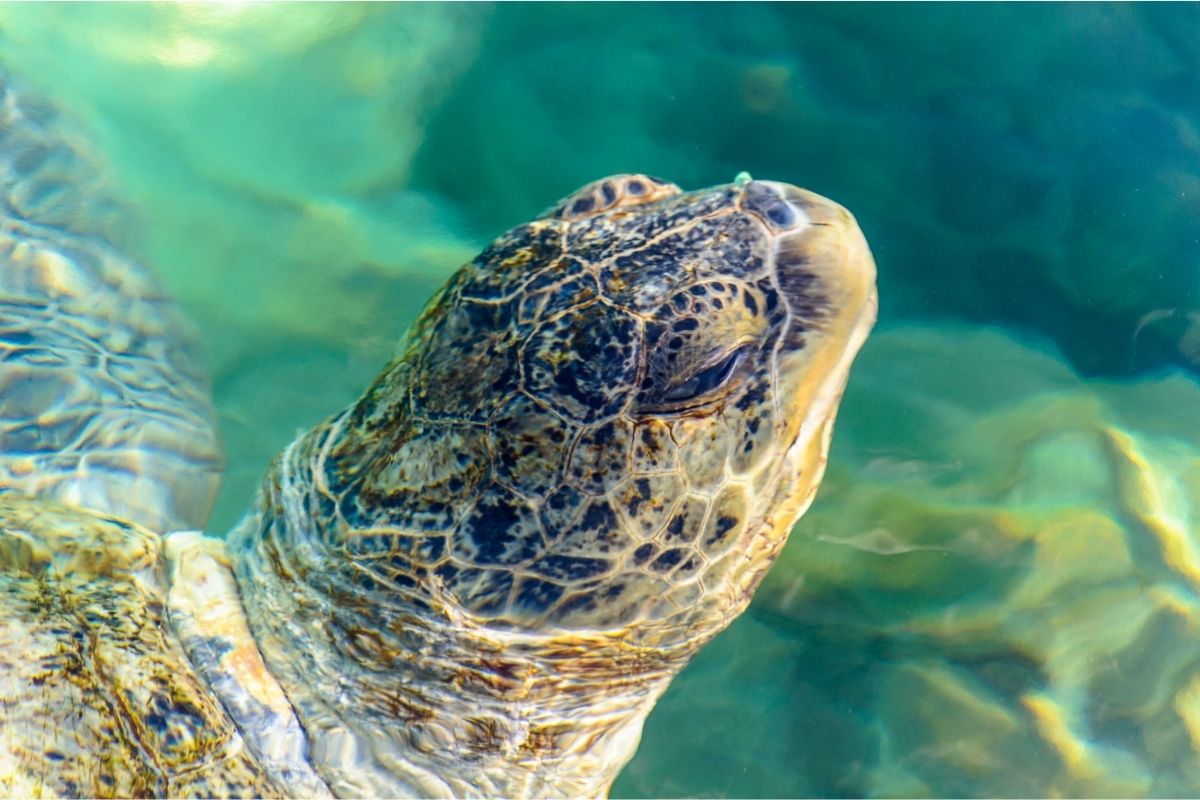 This egg tooth is used to break out of the shell from the inside and will stay on the hatchling’s beak for up to six months before falling off.

Some species of turtles such as the loggerhead and leatherback have spikes in their mouth that are used to protect the turtle from the stings from jellyfish when they swallow them.

How Long Should My Turtle’s Beaks Be?

The length of a turtle’s beaks depends on what type of food the turtle eats. For example, sea turtles have longer beaks than land turtles. Land turtles usually only eat soft foods such as leaves or grasses.

How Do I Trim My Turtle’s Beak?

Once you have gathered all of these things, it’s time to start trimming.

You might also need an extra pair of hands because your turtle won’t be very happy with you trimming its beak and will probably try to hide its head in its shell.

The other person should carefully hold the turtle’s head so that it cannot move but is not gripped too hard that it is painful.

If you are still struggling with getting the beak into the right position, it is best to take your turtle to the vet so that a professional can do it as it will be less stressful for you and the turtle.

The first step to trimming your turtle’s beak is to wrap it in a cloth or towel, depending on its size because you want the fabric to be big enough to swaddle the turtle.

Wrap the turtle up so that all that is sticking out is its head. Having its legs swaddled will stop the legs of the turtle from being able to push the clippers away and shield its face.

After the turtle has been carefully wrapped up, the next thing to do is use the clippers to trim the beak. You must angle the clippers at a 45-degree angle on either side of the beak where the overgrowth is.

Follow the natural shape of the beak when you are trimming it and make sure that it can fully shut its mouth so that your turtle is able to eat and function properly.

You can use a nail file or emery board to gently smooth down the edges of the beak but do not use a file that is too abrasive as this will be painful and may cause damage to the beak.

What Causes An Overgrown Beak?

When turtles in captivity are not fed a proper diet, their beak can get misaligned because it is not being used properly. 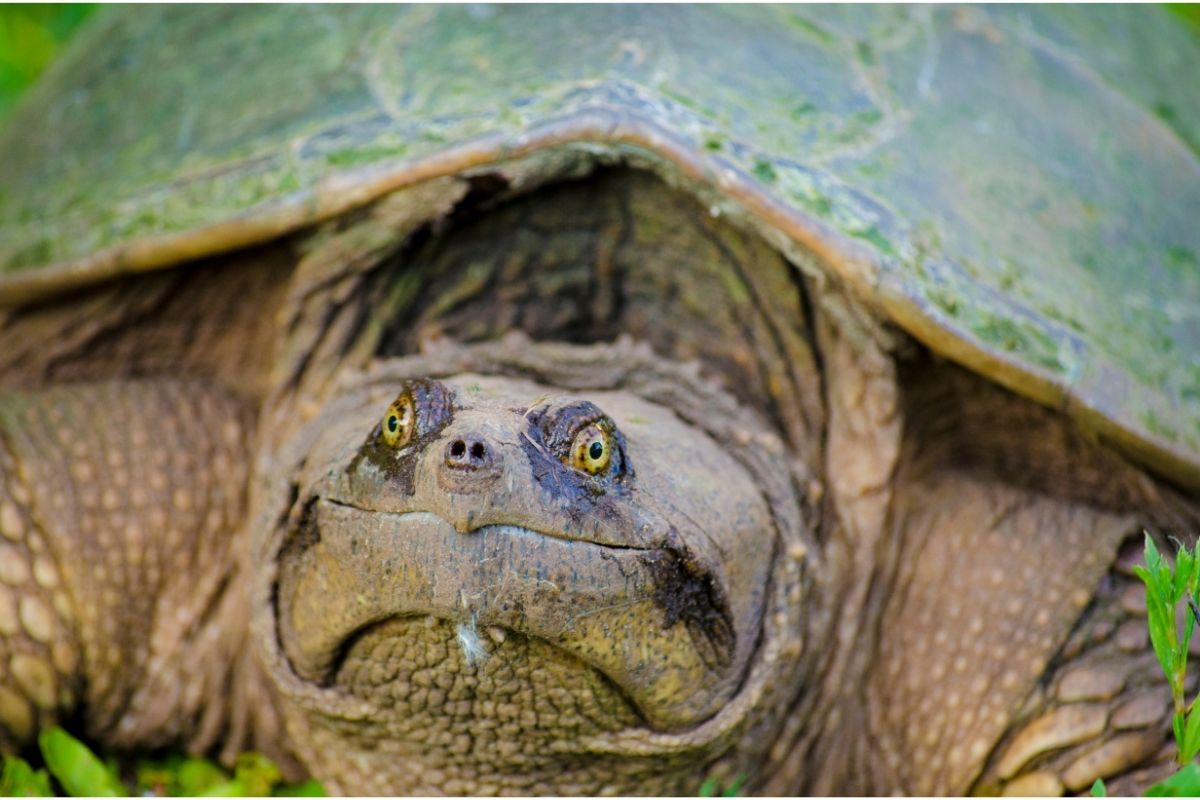 Poor bone development can be caused by having too much protein and not enough calcium in their diet as well and can make the skull as well as the beak form incorrectly.

If a turtle breaks their jaw, but the jaw is not healed properly afterward, the beak may be crooked for the rest of its life.

Feeding your turtle too many foods that are soft means that your turtle will have to chew nearly as much, but chewing is what helps to wear down the beak naturally so if they are not chewing, their beak will continue to grow and cause problems.

In order for your turtle to maintain a healthy length for their beak, you can give them a tortoise block or cuttlebone for them to chew which gives them valuable nutrients as well as naturally wear down their beaks.

If a turtle has an overgrown beak, it will make their life much more difficult as they won’t be able to chew, grab, and eat food properly which can cause them pain and even result in them not being able to eat as much and therefore suffer from malnutrition.

Once you know how to trim your turtle’s beak, it does not seem that complicated as you only need three supplies, and the process shouldn’t take too long overall.

Even though trimming the beak is not painful for the turtle when done properly, there is a risk that it could go wrong if the turtle struggles or the beak is cut incorrectly so taking them to the vet is sometimes the best option.