You may have seen online, television documentaries or even in person, a turtle eating a jellyfish. 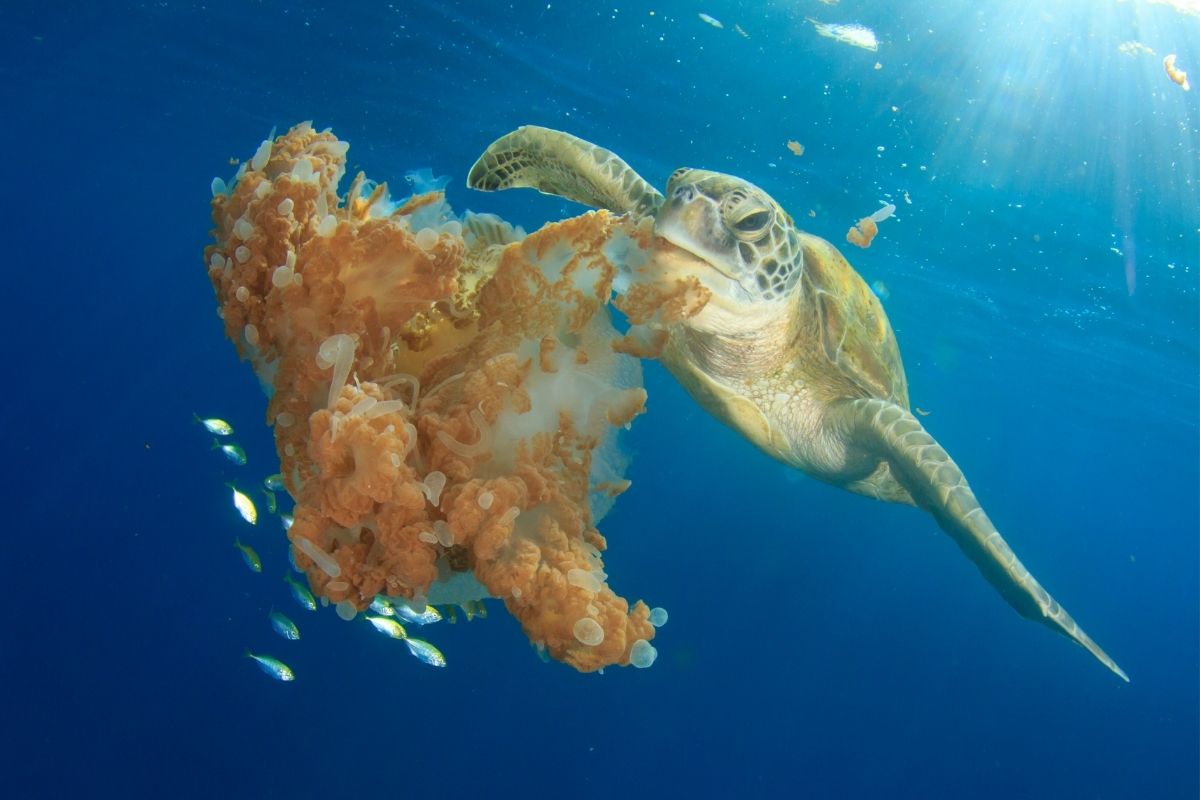 These are two of the most interesting creatures that you’ll ever encounter in the water, but watching a turtle eating a jellyfish can be a little unsettling!

We mostly know it is best to avoid jellyfish whenever possible because of how dangerous they are to us – but turtles don’t see them that way.

Turtles are omnivores and this essentially means they can eat plants but also some animals. If a turtle gets incredibly hungry when they’re out in the water, a jellyfish is a welcome sight.

Jellyfish are very slow moving and turtles can easily get to them – and sometimes, jellyfish can be found in large numbers, so turtles will not hesitate to chow down on them if they have to.

So, yes – turtles really do eat jellyfish, and it’s normally due to hunger – but there’s much more to it than that. This guide explores everything you need to know about turtles and jellyfish!

How Can A Turtle Even Eat A Jellyfish?

Turtles simply swim up to a jellyfish and eat a jellyfish whole, depending on the size. If it is a particularly large jellyfish, turtles will bite and bite until they’ve eaten the whole jellyfish.

You may be wondering how they can do this when some jellyfish can have painful or deadly stings.

Well, it depends on the turtle – because some are sensitive to the sting of a jellyfish, whereas others have little problem with it.

Is It Okay To Feed Your Turtle With A Jellyfish?

Most experts understand that turtles will eat most things if they are given them. They may even eat your pet fish if it comes to it!

Some local pet stores sell jellyfish, and you can in theory feed these to your pet turtle, but it may be better if you didn’t – because, as we mentioned earlier, some turtles might be extremely sensitive to the stings from jellyfish.

It’s likely that pet stores will have thought of this beforehand though, so it might be a good idea to ask them if you’re planning to do this.

Turtles can swim pretty quickly, but they won’t even need to. Jellyfish move at a very, very slow pace.

They will either pump their exterior to move through the water, which is very slow, or they will not swim at all.

Indeed, a lot of jellyfish simply move with the water. Either way, jellyfish will have a really difficult time escaping from turtles!

How Do Turtles Avoid The Jellyfish Sting?

Okay, so we mentioned that some turtles are sensitive to the sting, but this is not the whole story. Jellyfish stings work by piercing skin, either internally or externally.

Turtles, along with many other marine wildlife, will be able to eat jellyfish because their skin is incredibly tough, and jellyfish stings cannot pierce them as easily as they can with human skin.

In fact, turtle skins have been likened to leather or the toughness of our fingernails.

However, infrequently, a sting might get through to a turtle, and they will find it uncomfortable due to sensitive skin – but this is not very likely. 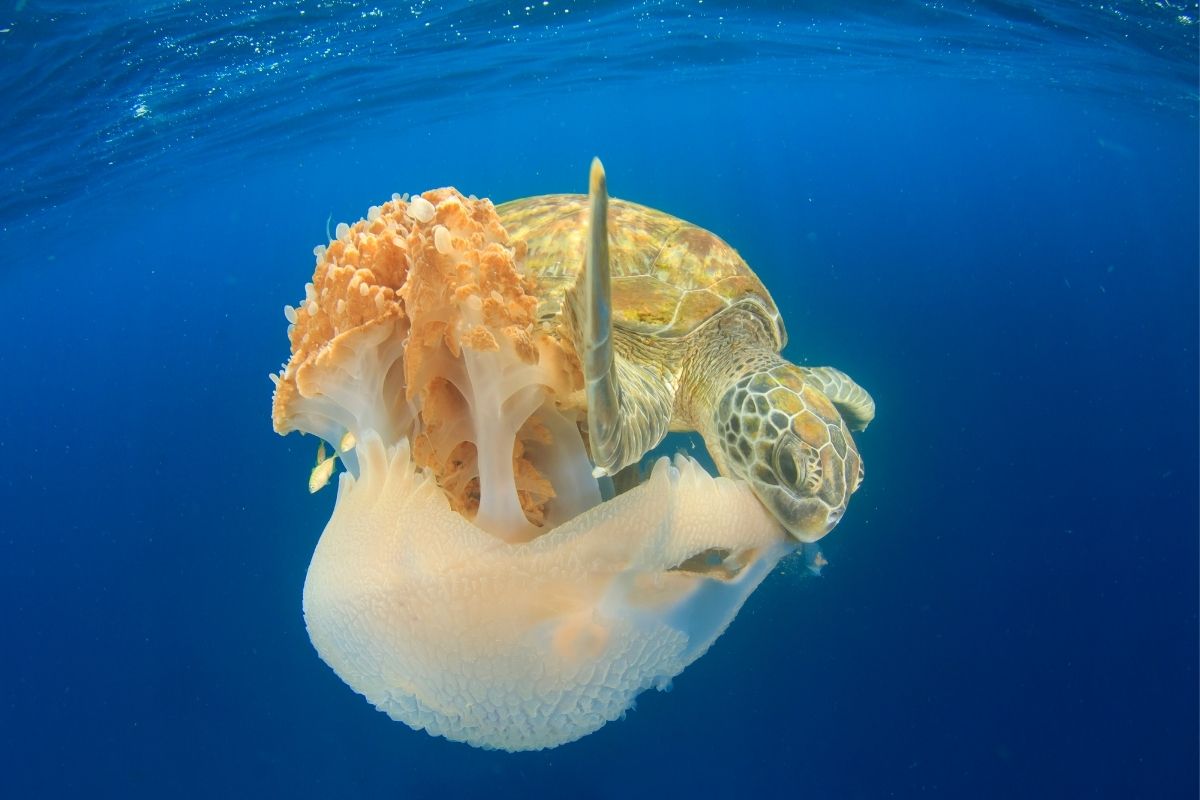 The same rules apply to the other marine wildlife that consumes jellyfish, like sharks and large fish like tuna.

Because all of these animals have very tough and durable skin internally and externally if they feel anything – it will be a very light and non-bothering “tingle”.

Although the level of study in this field is not very extensive, scientists theorize that turtles understand what jellyfish will be okay to eat and which ones will not.

This is because of the extremely dangerous jellyfish found mainly in Australia – the box jellyfish.

Do Turtles Eat A Lot Every Day?

Turtles eat quite a lot most days. In fact, scientists suggest that turtles eat about 73% of their body weight on any given day during the summer, because there’s a lot of food available in the sea at this time.

Turtles will eat lots of things due to their omnivore diet. They will eat seaweed, algae, shrimps, crabs, insects, coral and things that humans drop in the ocean.

In fact, some marine authorities around the world advise caution with plastic items around seawater because turtles will eat them or become entangled in them.

Similar to how some animals will store their food for periods of hibernation, like bears for example – turtles will eat huge amounts for a period of time, and then they will eat hardly anything for another period of time.

In fact, grown adult turtles can go about half a year without eating anything. This doesn’t transfer to baby turtles though because they need regular feeding during their development stages.

However, as the turtles get older – they will be able to grow, develop and do the same things that their older turtles will be able to do and will not need to eat so frequently.

Do Turtles Need To Stay In The Water?

Turtles love the water, and while they do not technically need to remain in the water to survive, they are much better placed if they do.

Due to their small size, they are a very easy target for predators on land, and they cannot move quickly enough on land to protect themselves. So, mostly, turtles will come to dry land to lay eggs. 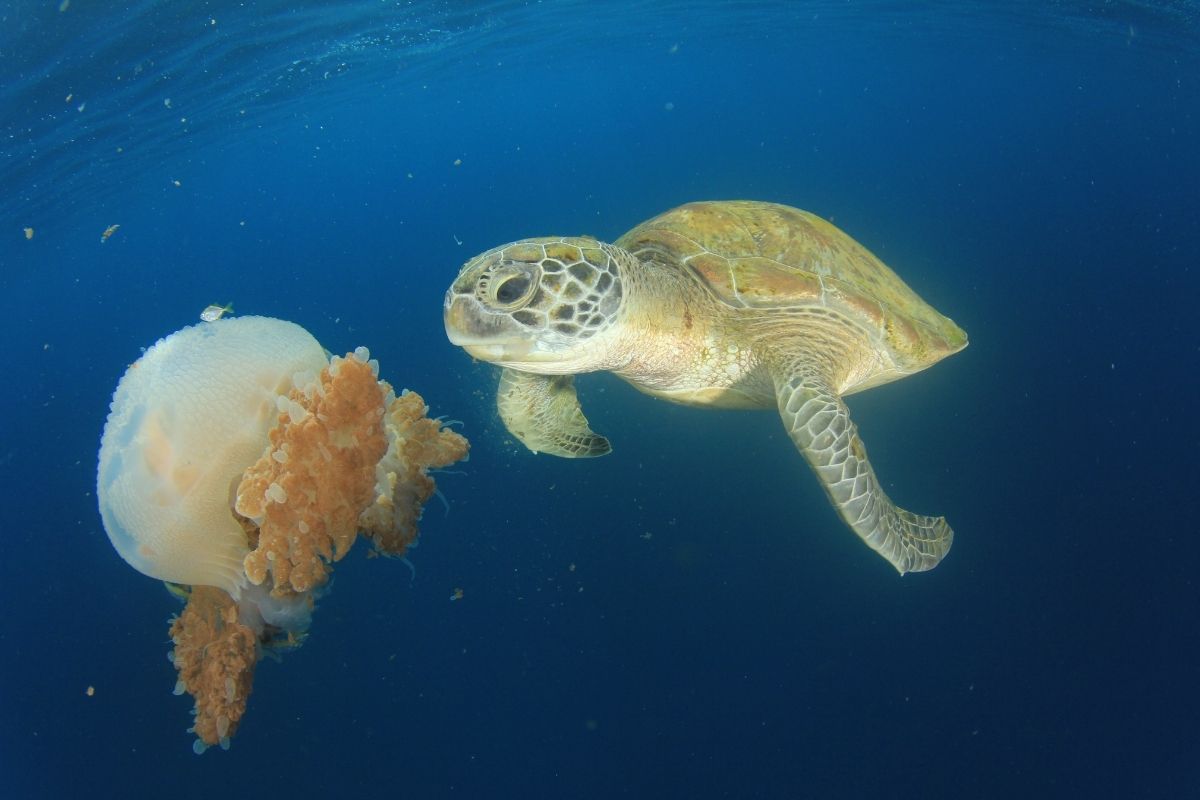 In fact, it’s difficult for turtles to survive from birth in the water due to the number of predators that will wait for the eggs to hatch.

Moreover, most of a turtle’s diet can be found in the water – so they are much better off staying in the water to survive.

Earlier in this guide, we mentioned that turtles may have learned over time that some jellyfish are dangerous to them, like box jellyfish.

Box jellyfish are extremely dangerous to most people and some animals – and turtles have worked out over time that jellyfish with tentacles can sting – so you’ll notice that they attack the jellyfish head first.

Many sea turtles will eat box jellyfish, such as the loggerhead turtle or green sea turtle. You may be wondering if this is okay for them to eat – the answer is, yes!

This is because most sea turtles are endangered, so if they can remain alive by finding food, whatever it might be, that can only be a good thing.

Turtles do eat jellyfish, and it’s okay for them to do it in order to survive. They would likely prefer to eat other things like shrimp and algae, but if jellyfish are around – they’re quite likely to swim over to them and chow down!

And we can happily say, they do not typically feel pain from a sting of a jellyfish, due to their intelligence and tough skin!