You may think you have caught your turtle yawning and thought it was another way of them acting cute. While this is not exactly a sign of cuteness or even tiredness, there are several reasons why your turtle may appear to be yawning.

Contents hide
1 Do Turtles Yawn?
2 Reasons Why Your Turtle May Be Yawning
3 Why Yawning May Be A Cause For Concern
4 What You Can Do If Your Turtle Continually Opens Its Mouth
5 Frequently Asked Questions
6 Final Thoughts 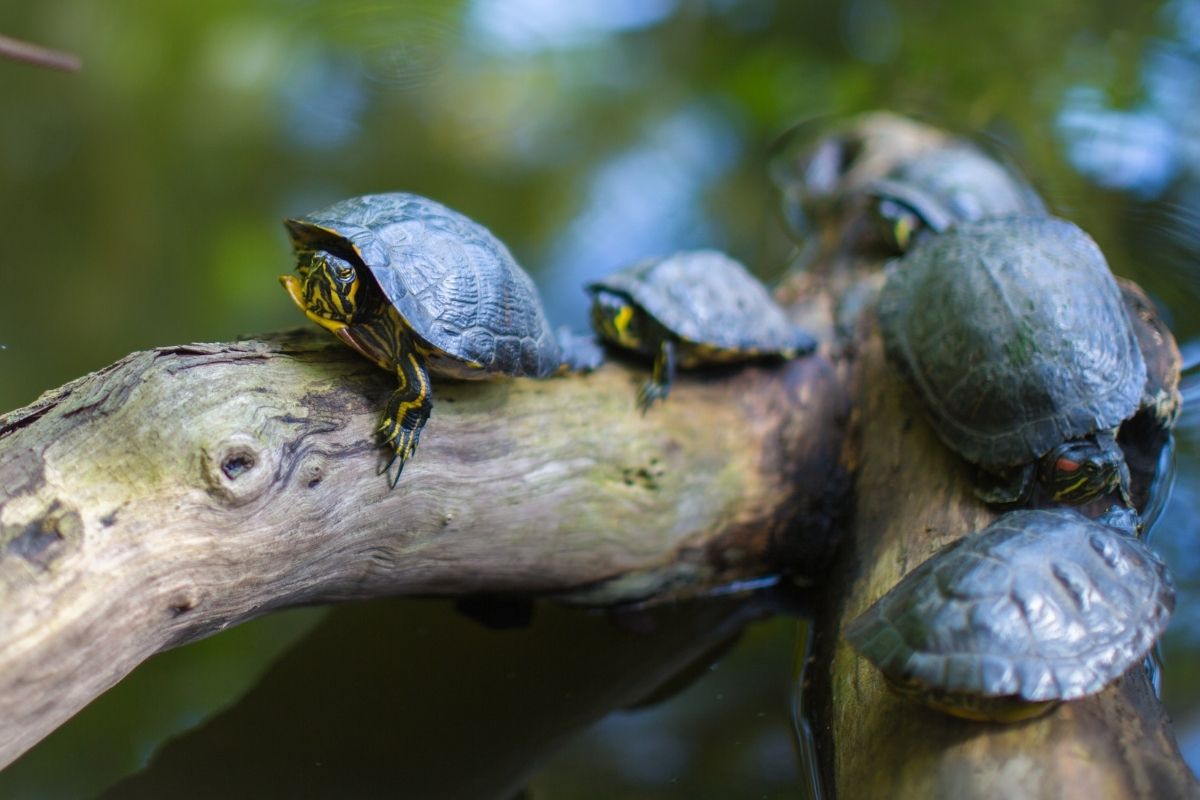 It could simply be to introduce more oxygen into its system or to keep their mouth open to find food when underwater. If you catch your turtle with its mouth wide open then you may have startled it too.

The yawn may also be a cause for concern if it persists as the gesture should only be a temporary and occasional exercise in getting more oxygen.

In this guide, we will look at the reasons why your turtle may be yawning, why it could be a concern, and what you can do if it continues to yawn.

First things first, yes, turtles do indeed yawn. While we may imagine that they are yawning because they are tired, this is largely not the case.

Research suggests that there are different reasons for a turtle to yawn depending on the environment.

For instance, there will be particular reasons for a turtle to yawn when basking on land, while the reasons will differ from when they are under the water.

Reasons Why Your Turtle May Be Yawning

Without making much sound at all, you can rely a lot on the expression of a turtle. They can seem exceedingly cute but a turtle can be disconcertingly aggressive if provoked or when they fear for their safety.

A wide mouth that may appear to be yawning can also indicate that the turtle is acting as the aggressor.

However, if you only see the occasional yawn on land then this is not a huge concern and under the water, it may even be a good thing to see.

Try not to rush to conclusions when you see a turtle that is seemingly yawning on land. This gesture may mean several things yet each should be considered.

The problem with this is that it could mean nothing at all but it can also mean that the turtle is suffering from an illness or sizable distress.

Be careful with what you consider to be a yawn too as a turtle with its mouth wide-open may be thought of as gapping which could mean an expression of anger or injury.

If the yawning is only temporary and occasional, combined with no other worrying symptoms or changes in behavior is likely to be just fine.

If you were to glance at your turtle when it is swimming underwater, you may notice that its mouth is agape occasionally. They may even look bored or tired but this is a sign of happiness.

Turtles feel exceptionally comfortable when they are underwater and as a natural habitat, it can be where they feel safest. Imagine that their mouths being open is their way of smiling.

Yawning is another way for the turtle to release more oxygen into their bodies which will allow them to become even more comfortable by staying in the water for longer.

If you do see your turtle yawning under the surface of the water then you should not be concerned. Certainly not as concerned as you may be if you saw it yawning on land.

Turtles may also yawn when they are basking and relaxing in the sunshine. This indicates that the turtle is seemingly cozy so they are going to need more oxygen which they can get from yawning.

The increased necessity for oxygen is because the turtle is not moving and with a lack of exertion they need other means of bringing in oxygen.

Their breathing may also be shallower when basking and a decent yawn brings in a deep inhalation to introduce an increased amount of oxygen to the lungs then the bloodstream.

The yawning while basking may also be an attempt to retain the turtle’s body temperature at an even level.

Why Yawning May Be A Cause For Concern 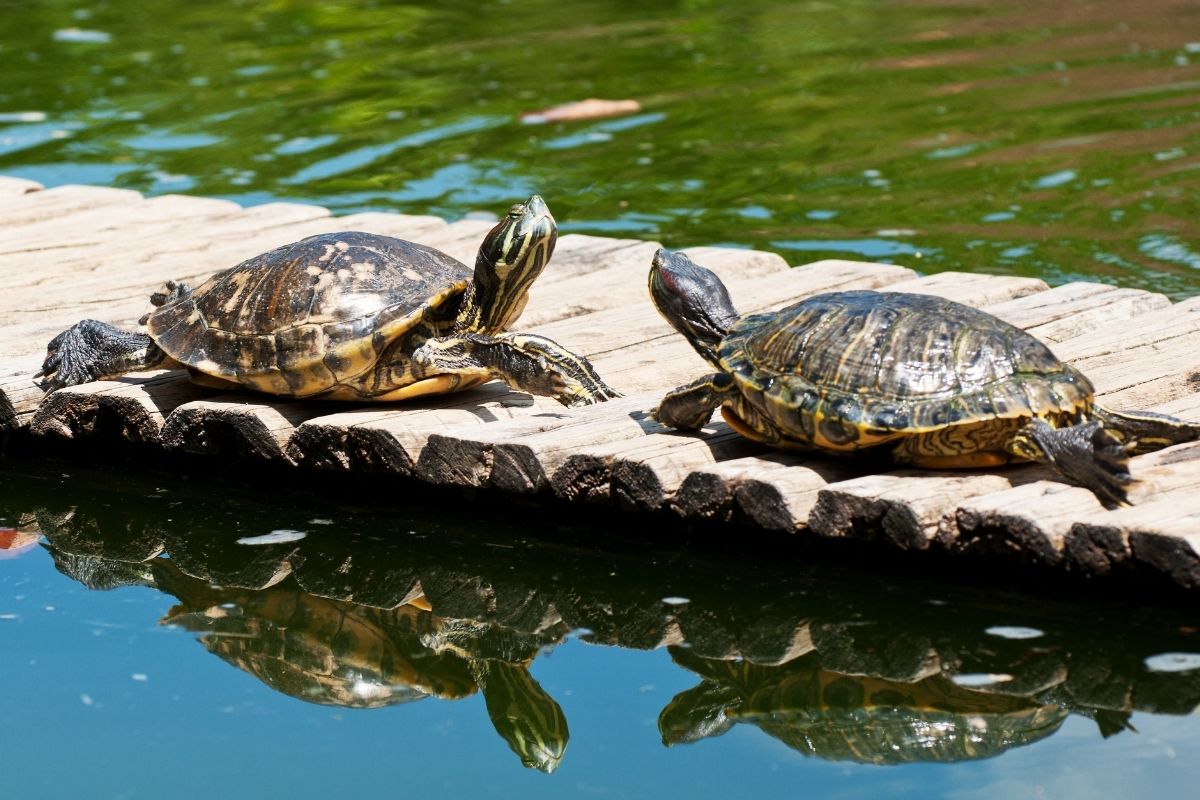 The gesture of yawning can also be a cause for concern but you should be able to ascertain the reason quite quickly. This could be because the turtle is scared or simply hungry.

Either way, by offering the turtle some food you can quickly stop the yawning and help your turtle get happy again.

Turtles have been known to open their mouth wide open to other animals when they can seem concerned for their safety or scared.

Even humans can scare a turtle and if you sneak up on it then the gaping mouth may indicate that they are trying to warn you off.

The gesture may also be seen if you remove your turtle from its familiar surroundings and place it somewhere new as it may seem scared and unnerved by the new environment.

The first time you take it home can certainly be a stressful experience and they may have a gaping mouth.

In this scenario, you may want to devise methods to put them at ease which is usually by feeding them some lettuce leaves or even crickets as a treat.

This treatment should help them gain comfort and gain thus reducing their stress.

If you do see your turtle with its mouth open in the water this may be a sign that they are comfortable yet it could also be an indicator that they are hungry.

This is particularly evident when they are swimming through the murky water as their hunger increases if they smell food but cannot see it.

Keeping their mouth open helps a turtle smell and taste food and they will use this trick to their advantage to find food.

When Suffering From A Mouth Injury

One of the more concerning reasons for a turtle to yawn is when they are injured.

This is more frequently a reason for yawning if they have suffered an injury to their mouth. The act of yawning and opening their mouth may relieve the pain.

Should you suspect that the turtle is suffering from an injury to its mouth then check its throat, inside its mouth, and the opening skin that surrounds its mouth.

This checking may prove difficult if the turtle does not want you to open its mouth and it may decide to fight you but a gentle way is to pull its head out of the shell to gently pry its mouth open.

Other indicators of an injury are changes to their typical behavior which can also signal pain. These changes include lethargy and aggression, coupled with a lack of appetite.

Should these indicators persist and you cannot check its mouth without suffering from an aggressive response then you may want to allow a veterinarian to take a look instead.

When Suffering From A Respiratory Infection

As yawning helps a turtle introduce more oxygen into its system, a continued yawn may signify a breathing problem or a respiratory infection.

This can be seen on land but also while underwater through lopsided swimming, blowing bubbles, and wheezing.

If you do suspect that your turtle is suffering from a respiratory infection then this can be easily solved without involving a veterinarian.

Allow the turtle to rest in a dry area and keep them comfortable and warm so it gives the turtle a chance to rid itself of the infection.

What You Can Do If Your Turtle Continually Opens Its Mouth

The occasional and temporary yawn could be nothing to worry about.

However, if your turtle continues to open its mouth continually both in and out of the water, no matter what time of day, you may want to contact your veterinarian for some advice.

While, for humans, the act of yawning is typically an indication of tiredness from a lack of sleep, for a turtle it can be more serious than that.

Yawning does let more oxygen into the lungs and eventually the bloodstream. If your turtle is yawning constantly, it could indicate that they simply are not getting enough oxygen into their systems.

This could be due to a breathing problem or be attributed to a failure to maintain their optimum body temperature. Either reason can be a cause for concern and you should look out for other issues.

Other symptoms that may be worth investigating include a lack of eating, a lack of movement, a stuffy nose, or swimming strangely.

While they may seem like trivial problems on their own, they can indicate more serious health concerns which will require professional advice.

What Do Turtles Do When They Are Scared?

Either another animal or an owner can scare a turtle by approaching them in a manner that may seem aggressive. If that happens, they may open their mouth wide to indicate that they are scared.

Another sign of fear is if it pulls its head into its shell very quickly which can also force the air out.

Why Does It Appear That A Sea Turtle Is Crying?

You may see a sea turtle appear to be weeping but, like yawning, this is likely not something to worry about.

As reptiles have kidneys that are less efficient than many mammals, they fail to produce urine that has a higher salt concentration than the seawater they may drink.

As a biological trait to prevent them from poisoning themselves by salt buildup, a sea turtle will pump salt ions into their tears when using a gland in each eye.

Should your turtle continue to yawn then this is probably something you should keep an eye on as it could indicate something serious. This could be a respiratory infection or a mouth injury and you would be wise to investigate further.

If you cannot establish the reason for the yawn then you may want to contact a veterinarian. However, if the yawn is only temporary then it could be nothing to worry about at all.