Dogs look up to us, cats look down on us – Winston Churchill

One of the first lessons that we all learn about the animal kingdom when we’re young is that dogs and cats have been locked in an eternal cold war since the dawn of time.

We’re taught that their perpetual antagonism toward each other means that felines and canines will never be able to see eye to eye, and as such, we’ve become immersed in the idea that we either have to be a cat person or a dog lover. 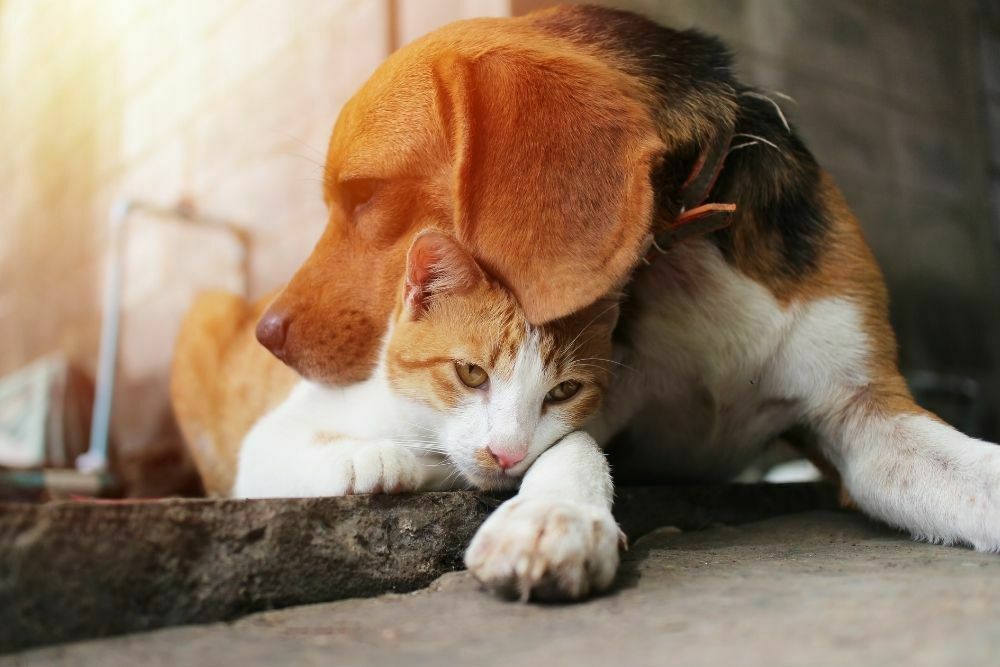 But that old wives tale just isn’t true, you don’t have to pledge your allegiance to either side, and you can be both a dog and a cat person.

The mythological rivalry that’s supposed to exist between the most popular of four-legged pets and companions is just that.

It’s a myth, and to help you find a canine friend for your cat, we’re going to take a quick look at the breeds of dogs that are more than happy to share their home with a resident feline, provided they’re introduced, and socialized properly from an early age. 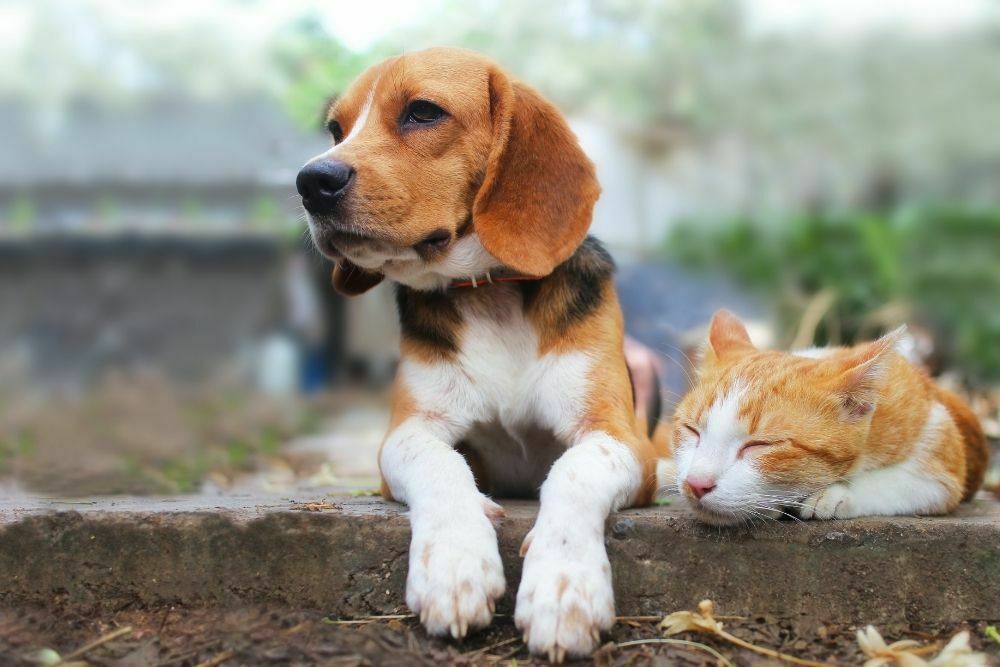 We know what you’re thinking, Beagles are scent hounds and hunting dogs, so surely their high prey drive makes them completely unsuitable for life with a cat?

That would be true if it weren’t for Beagles are pack animals and have a laid-back, amiable demeanour that means they generally get on well with and adore being around every family member, cats included.

In fact, if you’re going to be out most of the day and want to find a way to help your Beagle get over his or her separation anxiety (as they pack animals and they’re prone to the loneliness blues ), a cat could be the ideal companion for your hound and might just help to save your slippers, shoes and soft furnishings from the unwanted attention of a lonely Beagle. 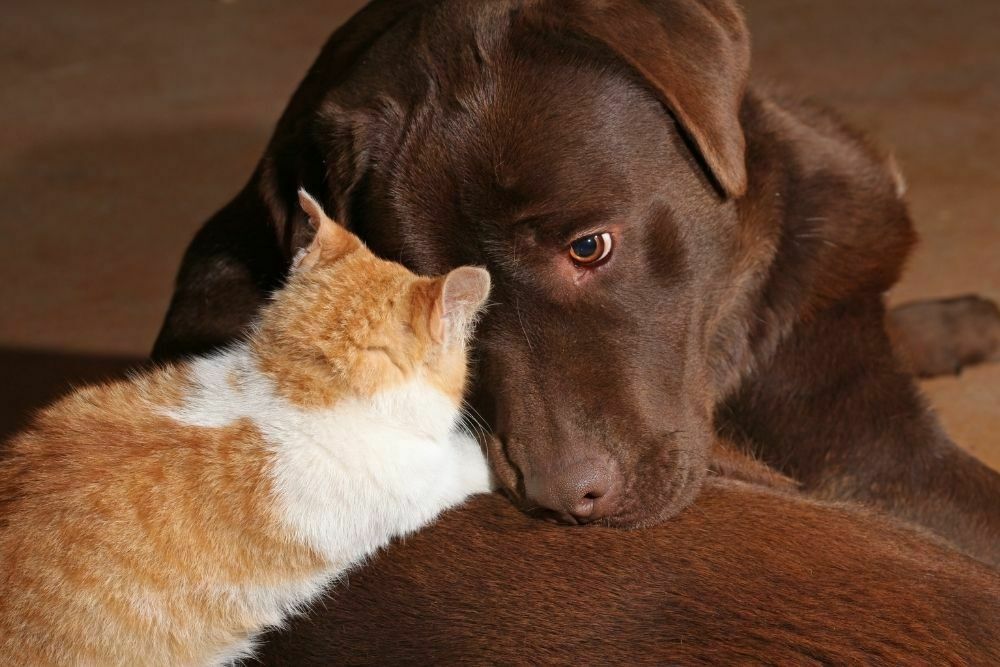 A carefree canine who loves to play and cuddle, the Labrador is a friendly, gentle dog who adores spending time with its pack and family.

It doesn’t have a high prey drive, as it’s a gundog that was bred to retrieve and fetch prey rather than hunt for it, Labs (hey, we’re fans of the breed, we’re allowed to shorten its name and you are too) are a perfect family dog and companion for every two and four-legged member of a household, as they would rather cuddle up to a cat than chase one around the halls of your home. 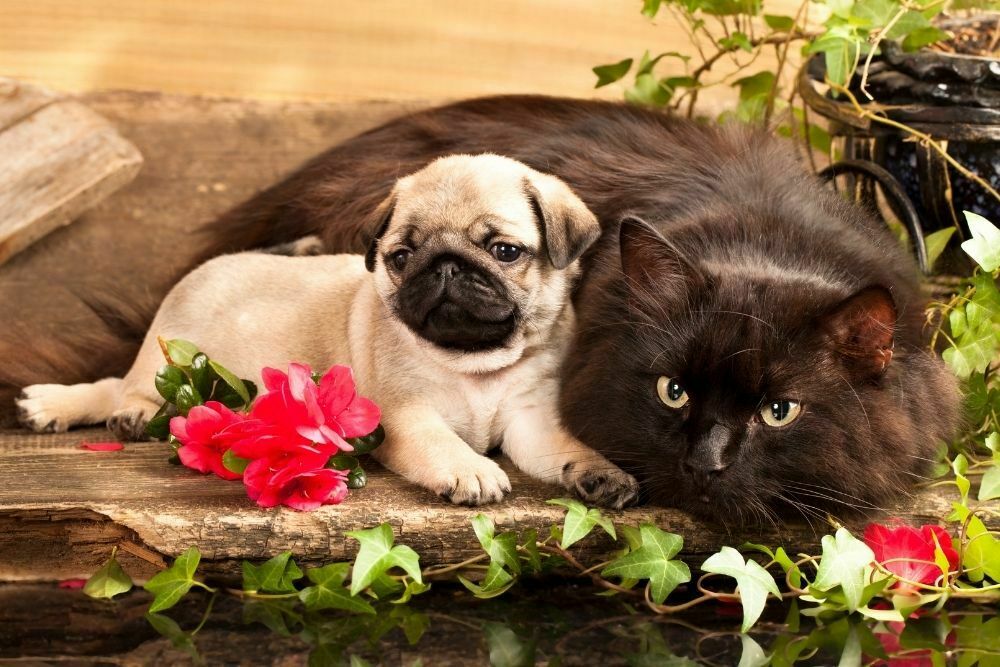 The itty bitty love bug that adores everyone, the Pug is a cuddle machine who will wear a cat down with its persistent insistence that they should be best friends and spend every hour of every day, hanging out and getting up to whatever mischief the cat decides they should.

Let’s face it, your cat is going to be the brains of the operation, as Pugs aren’t the brightest of dogs, but what they lack in smarts they more than make up for with their loyalty and devotion, and whether your cat wants a new best pal or not, she’ll end up with one if she lives with a Pug. 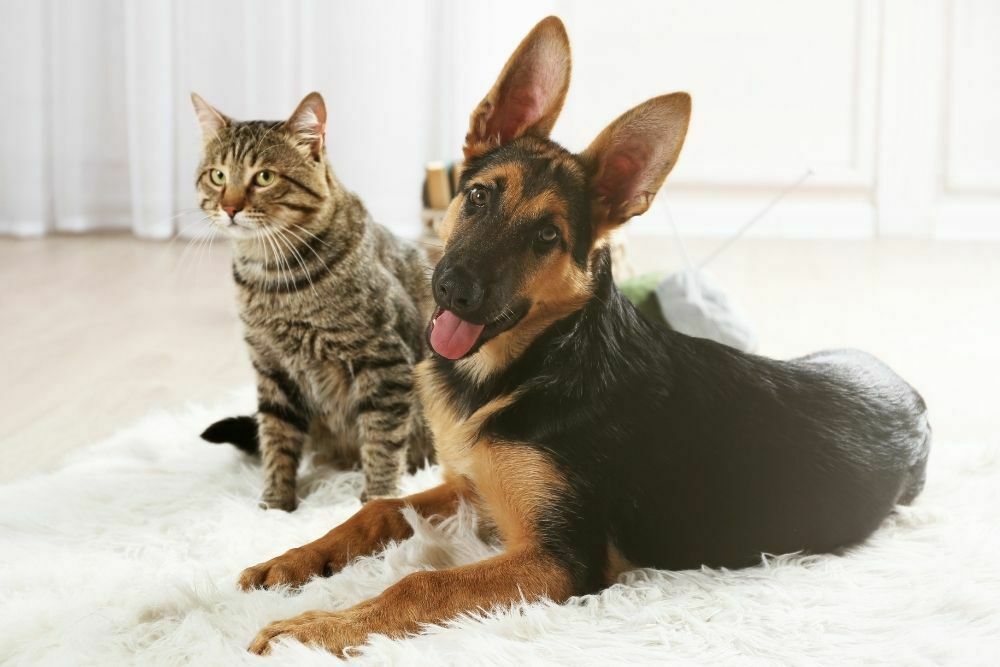 Every alarm bell in your head probably started to ring when your brain put the words German Shepherd and cat into the same sentence, but trust us, if a Shepherd puppy is introduced to your kitty, they’ll become firm fast friends for life.

The Shepherd’s defining qualities are its devotion and loyalty to its pack, and if a Shepherd is introduced to the resident cat at an early age, he’ll just see the kitty as being another member of his pack that he’s there to protect come what may.

Their fealty to their families is stronger than their prey drive, and as long as your cat lives with a Shepherd, it’ll never have anything to fear from this dog.

Another hunting dog? That’s right, the friendly, calm, and confident Basset hound might be adept at tracking anything and anyone in the wild, but when they’re at home, they like nothing more than to relax and enjoy the company of their families.

And the Basset doesn’t care if their family members have two legs or four, as they just like to get along with everyone.

Most Bassets are so calm that your cat might just decide to use the dog as a bed and end up sleeping on your hound rather than on your lap. But that proves that those old wives who like to gossip about dogs and cats didn’t know what they were talking about. 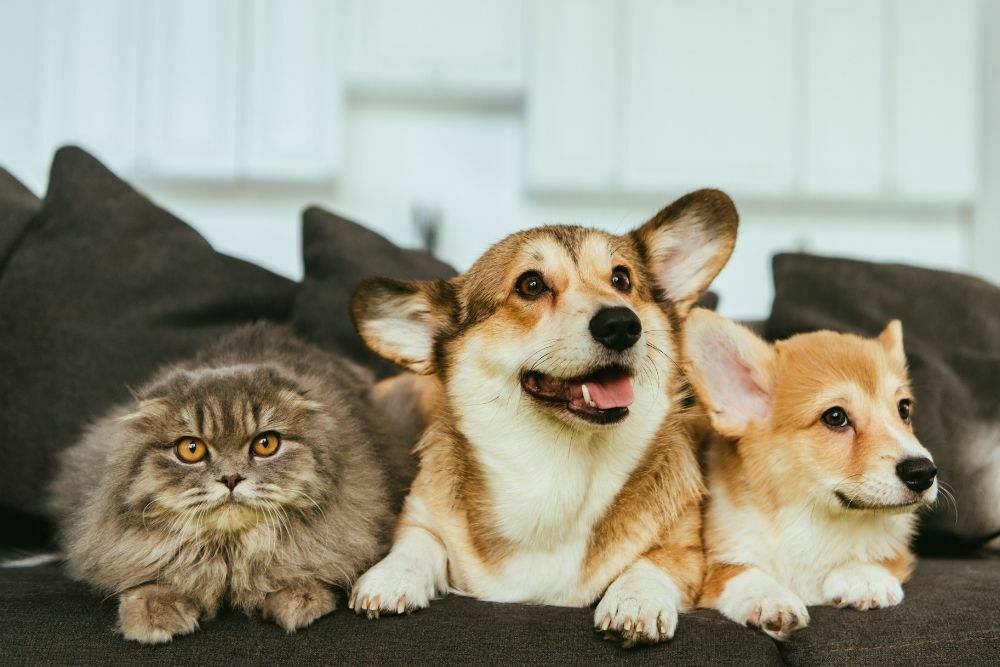 You’ve probably started to notice a pattern, as, with the exception of the Pug, all of the dogs on our list are working or herding breeds.

That’s because they’re all bright, adaptable dogs who are easy to train (with the exception of the Basset and the Beagle, who are both as stubborn as the most stubborn mule you’ll ever meet) and socialize and aren’t phased by, and actually enjoy, the company of cats.

Corgis are high-energy, easy-going Welsh dogs originally bred to round up sheep and goats. Their fearless attitude to life makes them an ideal playmate for any feline, as they’ll just see your cat as another friend who they can spend their downtime with.

The Rules Of The House

While dogs and cats can and do get along, it’s important to find out as much about the dog that you intend to bring home as possible and the behavioral traits of their breed.

Dogs with a high prey drive are likely to chase a cat and shouldn’t really be homed with a feline they might see as just another animal they should be hunting and pursuing.

It’s also important to remember to introduce cats and dogs to each other from an early age, and the earlier you do it, the better.

If they grow up around each other, cats and dogs will simply see each other as a member of the same pack, and their biological drives and behavioral urges will play absolutely no role in their interaction and relationship.

As long as you take the time to introduce them to each other slowly and carefully, dogs and cats can and will happily live together under the same roof.