On average a dog can live around 12 to 15 years, however, depending on the genetic makeup of the dog can affect this.

The following list is of the top 15+ most popular dog breeds in the United States with the shortest average life expectancy. Some of these dogs may live longer than we say, but this is the average that you can expect.

The Bernese Mountain dog can live for around 7 years. These dogs are known for being fluffy and enjoy colder temperatures. They are a larger breed of dog, with typically black and white coats with brown markings around their face and legs.

They have a very gentle and sweet character, which makes them ideal in social situations.

A Mastiff can live anywhere between 6 and 12 years; however, on average, they live around 7.5 years. These dogs have been around for years and are thought to be developed in medieval England.

These are quite a large breed of dogs. They are very loving and care about their families. However, this does make them very wary and unsure around strangers. 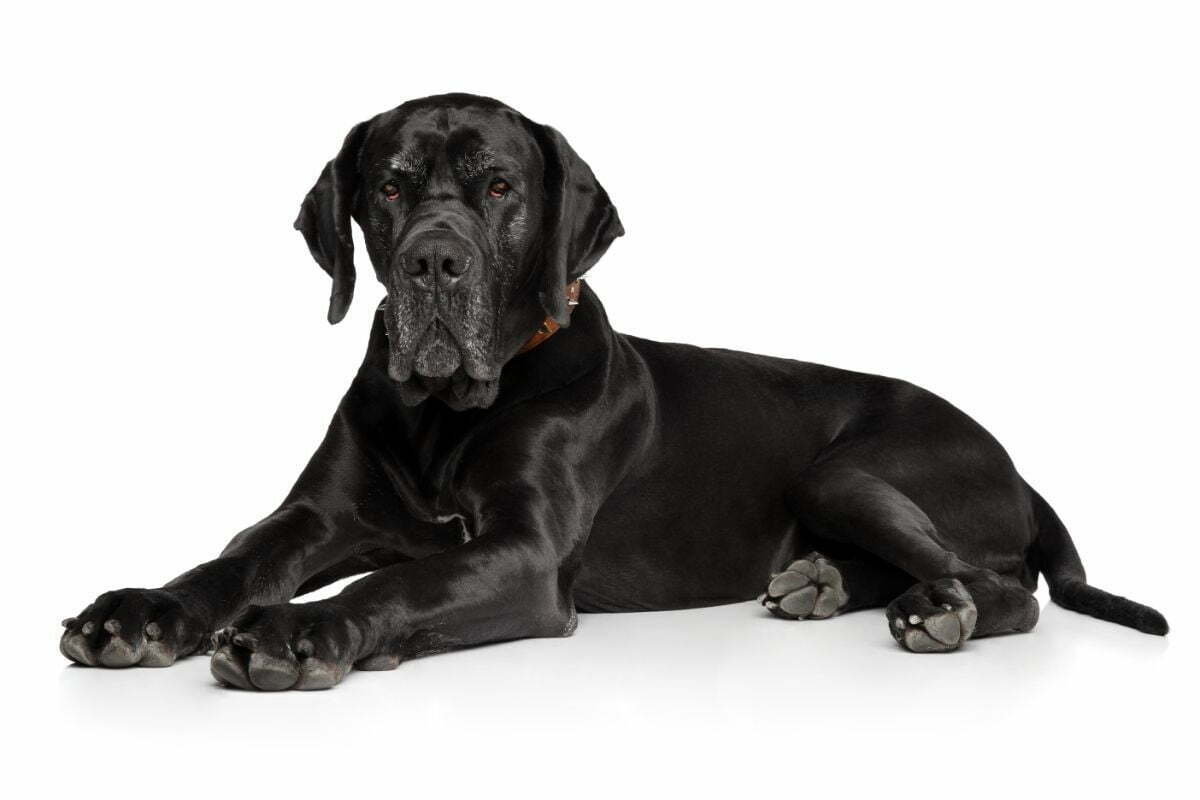 The Great Dane has a lifespan of around 8 years. These dogs are extremely tall and tower over other dogs. Even when they stand on their hind legs they can be taller than a lot of their owners.

Even though these dogs are tall, they have very sweet and friendly personalities. Alongside this, they can be seen in a range of colors from black, white, and gray. 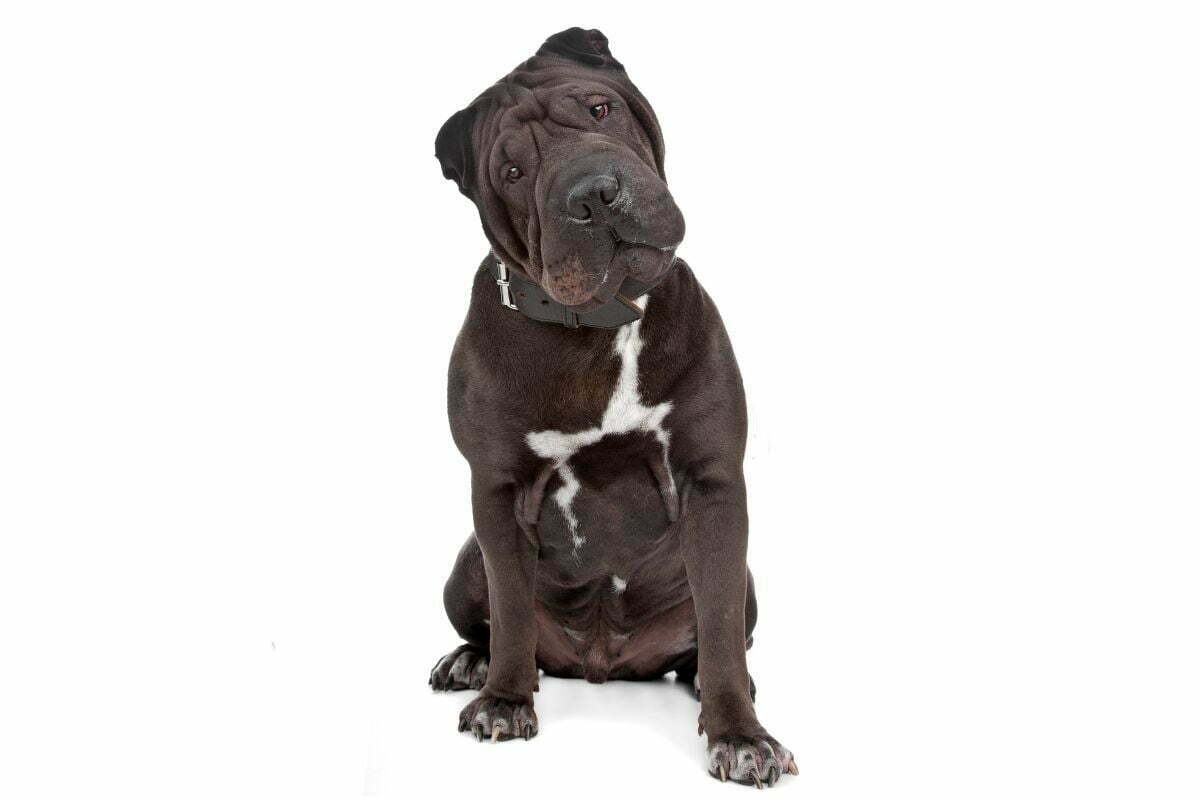 The Chinese Shar-Pei has an average lifespan of 8 to 10 years. This breed of dog suffers from a range of minor health issues, including hypothyroidism, otitis external, and canine hip dysplasia.

There is no denying that these dogs may be quite strange to look at. However, these dogs are known for their loyalty and dedication to their owners.

Saint Bernard lived for around 8 to 10 years. This is a very popular and worldwide known breed of dog. These are huge dogs that commonly have huge, fluffy coats.

These dogs are associated with being nanny dogs for families with children. They have also worked as rescue dogs for lost travelers who have gotten stuck in the Alps. These dogs are very calm but highly intelligent.

The Rhodesian Ridgeback, on average, lives for around 9 to 10 years. These are very athletic dogs that are fast and like to be independent.

Its name comes from the hair that grows in a thin line down this dog’s back. A medium to a large-sized dog that will always be loyal and faithful to its owner and family. 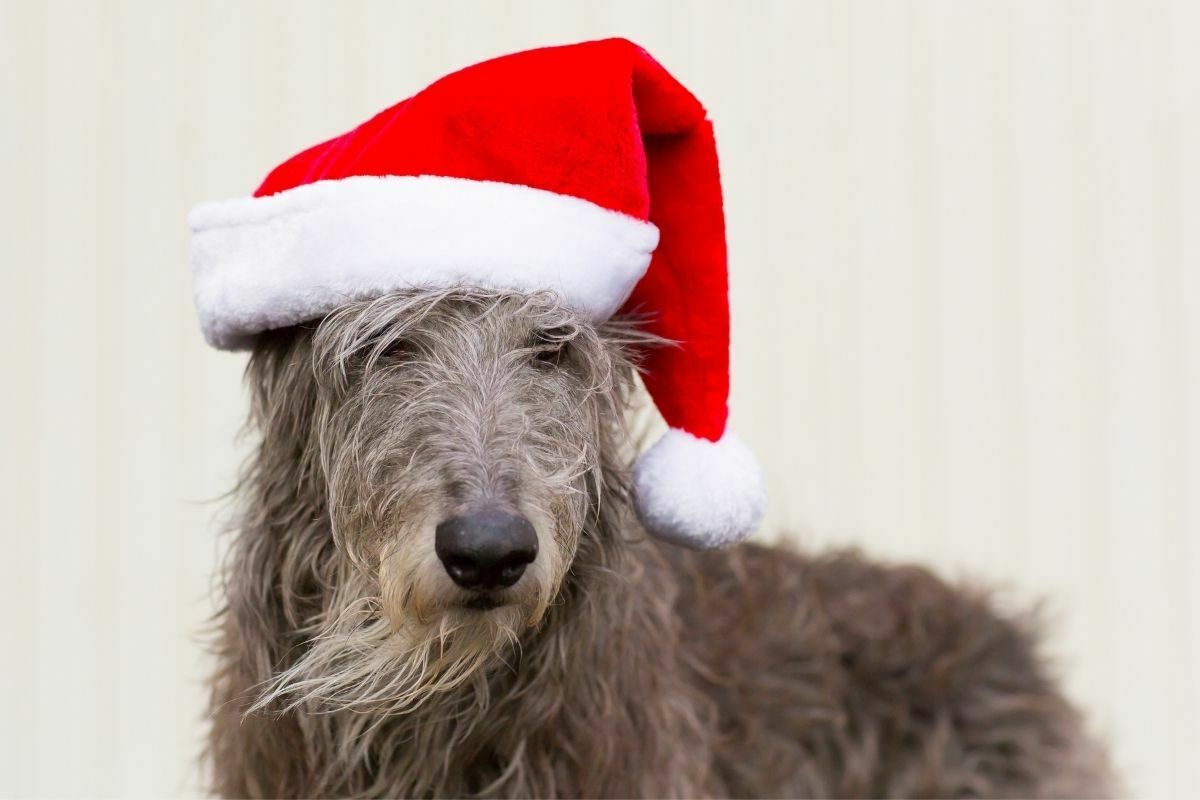 A Scottish Deerhound has a lifespan of 8 to 10 years. Another large dog with quite shabby-looking hair.

These are seen as a royal dog of Scotland, who were bred for hunting deer. Whilst also roaming the Highlands. These dogs are very big but don’t live for very long on average. 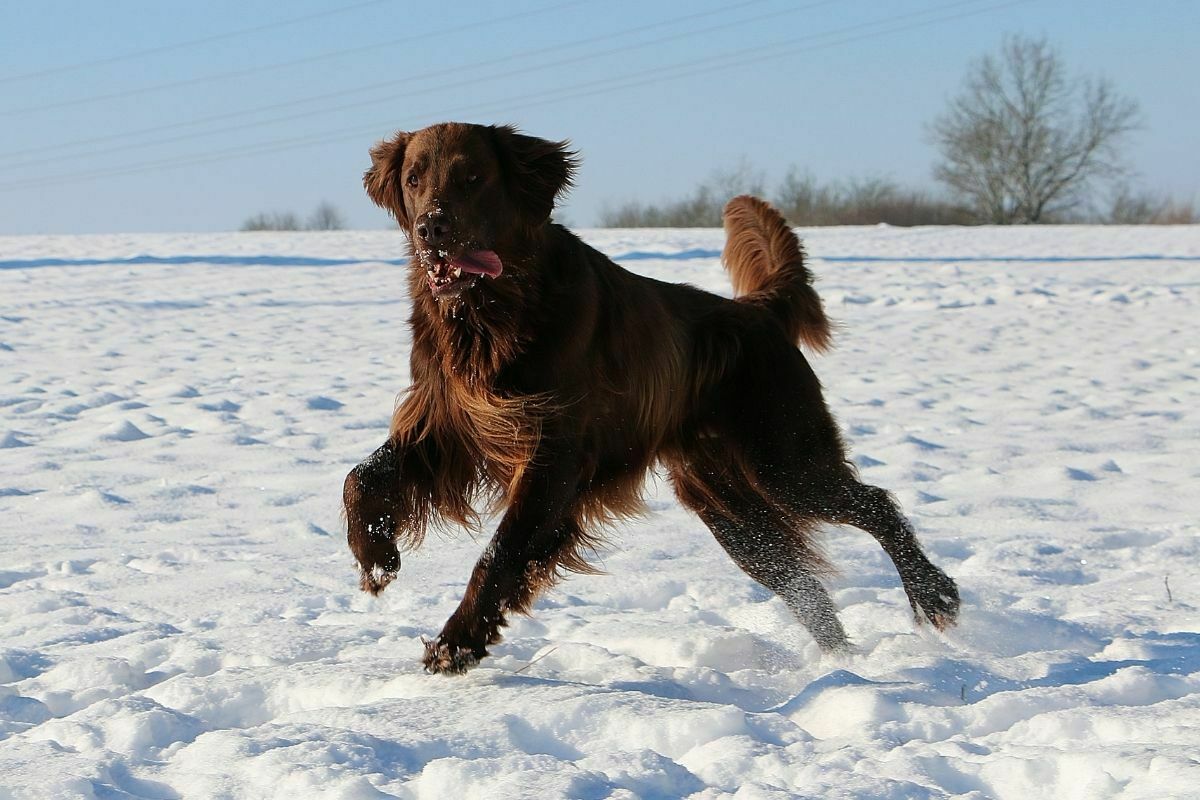 A Flat-Coated Retriever is a much smaller dog compared to some of the dogs we have already mentioned. They have an average lifespan of 9 years.

These dogs have very silky coats with feathering fur on their tails. The Flat-Coated Retriever is happy when they are at home or outside on a hunt. A very cheery dog that holds onto its puppy-like personality until its old age. 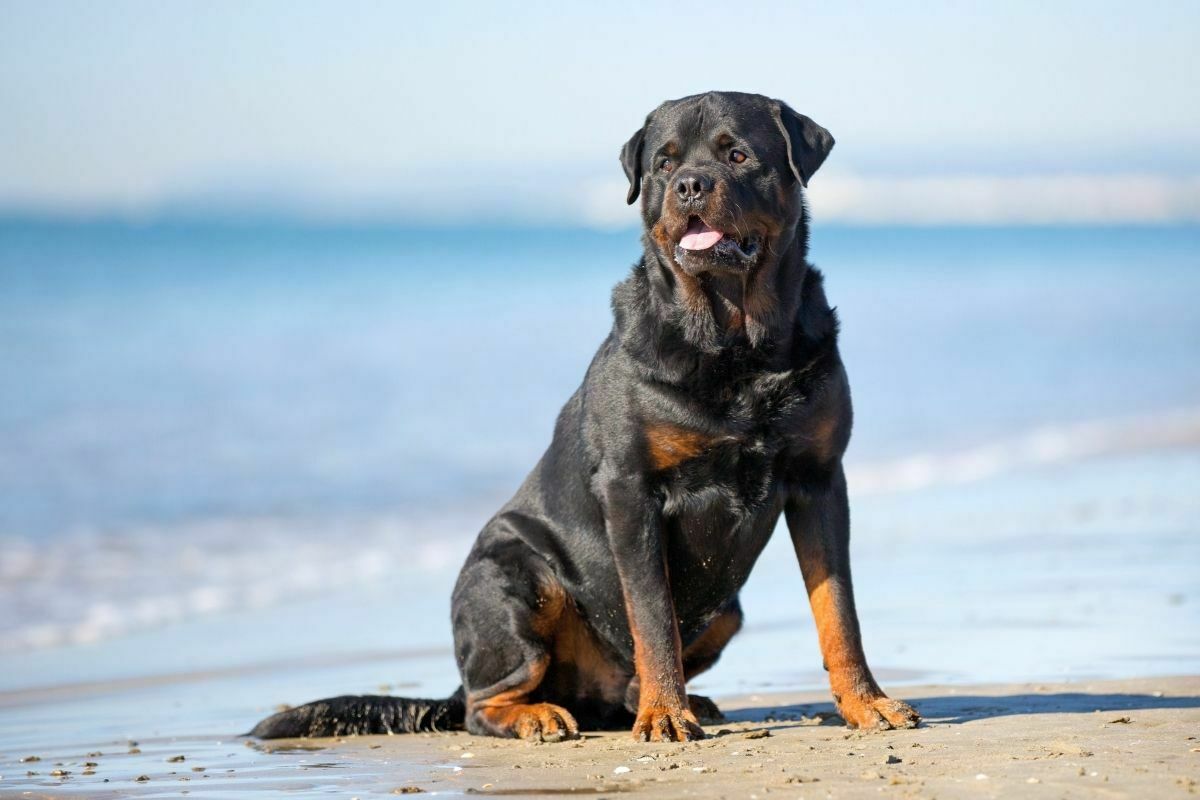 A Rottweiler will only live for around 8 to 10 years. They are known as working dogs, who you don’t want to make their enemy. However, their owners see another side to this dog. Towards their owners, they are gentle, loving, and caring.

One of the most recognizable dog breeds commonly seen in the police force, military, or security guard dogs. 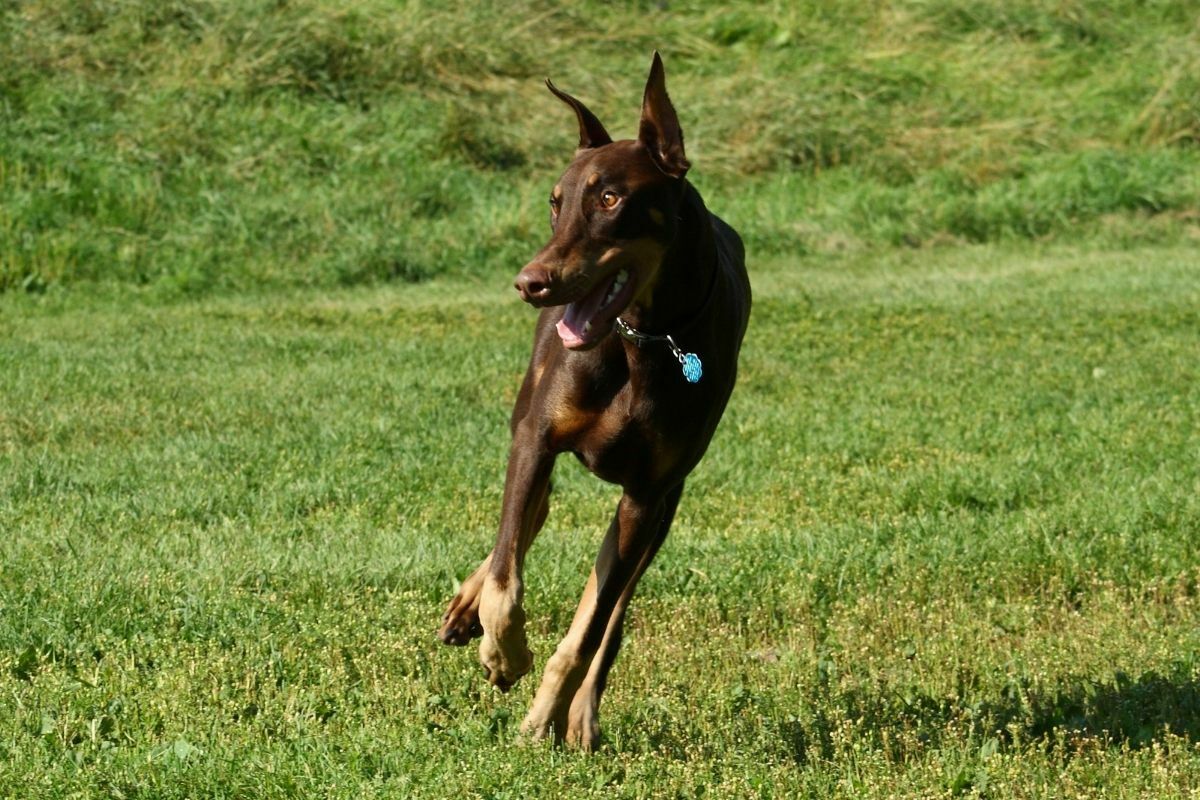 The Doberman Pinscher has a life expectancy of 9 to 12 years. They have similar coloring to a Rottweiler but a much leaner build.

They are also brilliant dogs that are used in the police force. Alongside this, these dogs are very loyal but can be stubborn. They do take a lot of training.

Weimaraner’s can live for around 11 to 12 years, as long as the breeder is committed to looking after them. As these dogs are known for being susceptible to viral and bacterial infections.

They are recognizable for their sleek gray coats. Native to Germany, they were bred for hunting purposes. These are the ideal family dog due to being loving, friendly, and caring personality. 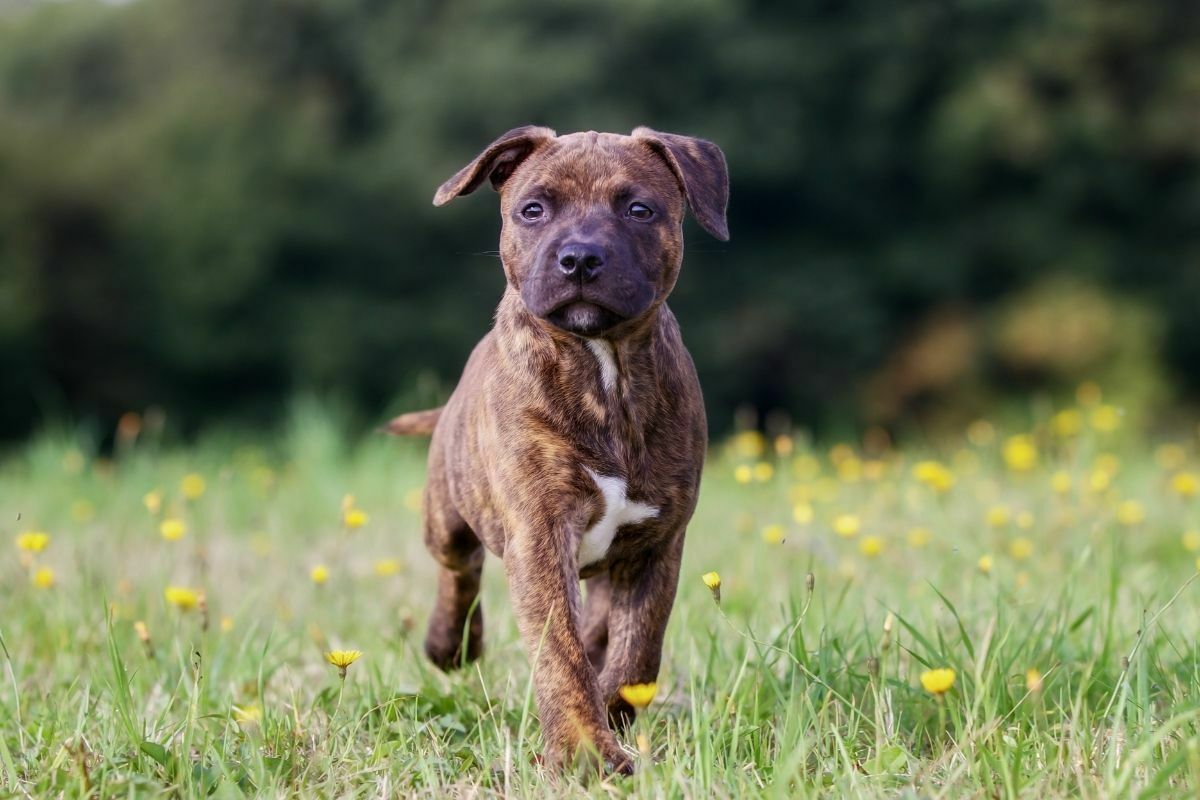 The Staffordshire Bull Terrier has a lifespan of 10 to 12 years. There is a lot of debate over the nature of these dogs, as they used to be used as fighting dogs. However, these stocky dogs are family oriented.

To ensure they don’t become aggressive towards other dogs, they need to be introduced to other dogs early. 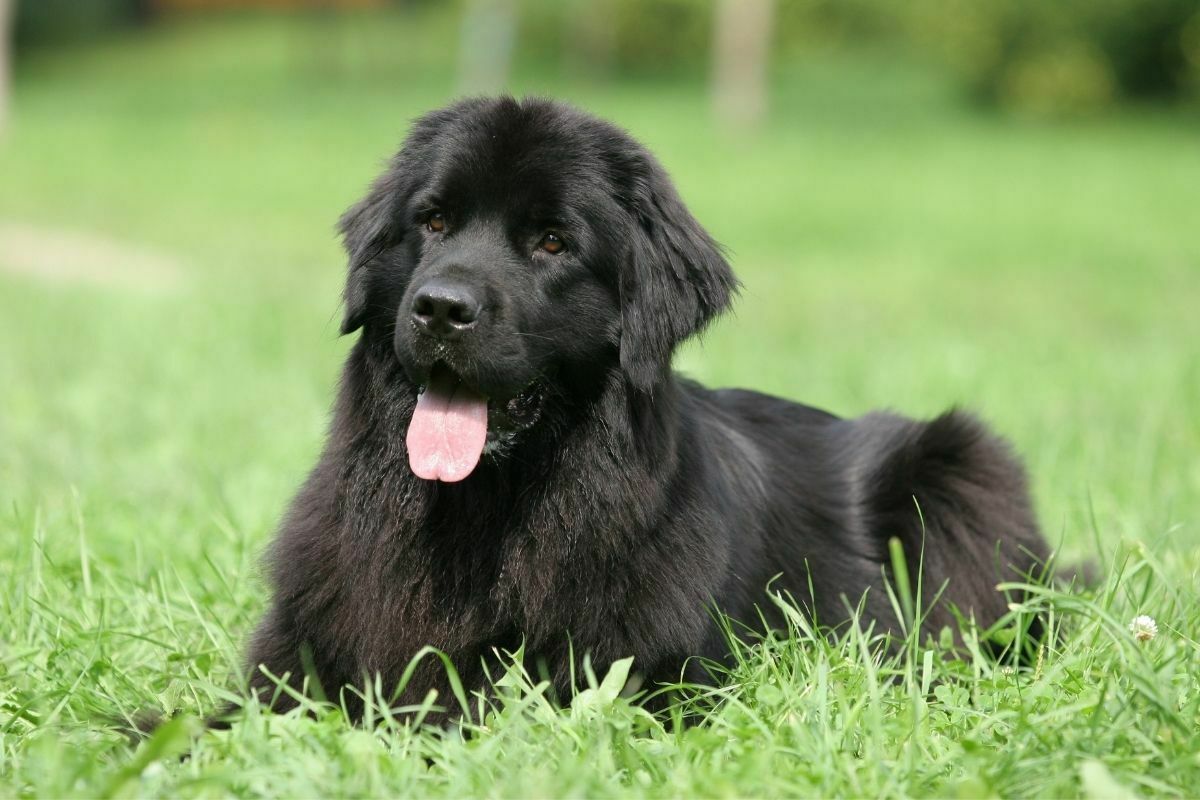 Newfoundland has an average lifespan of 8 to 10 years. These are among the largest breeds of dogs you will encounter. However, their fluffy coats may add to their size as well.

These dogs may be huge, but they are very loving and love to be outside with their owners. These dogs are known to suffer from a genetic heart condition called subvalvular aortic stenosis, which also affects the lifespan of this dog. 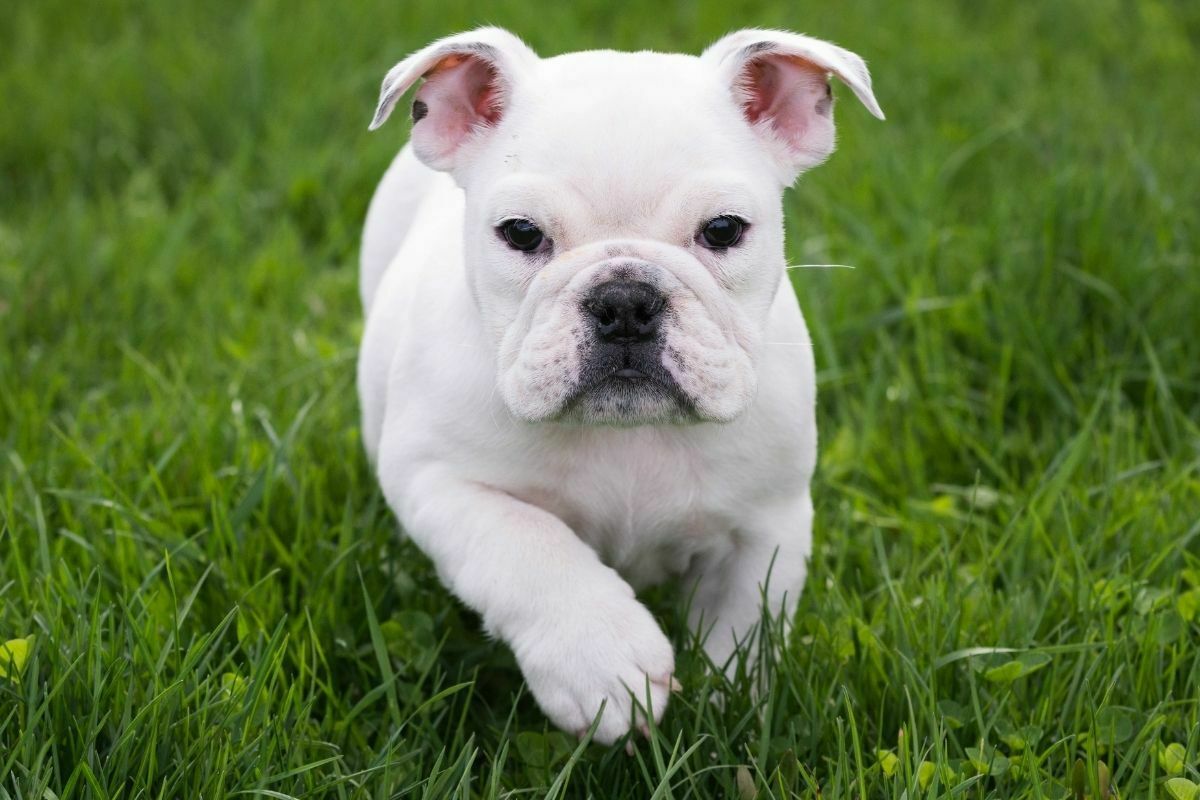 On average, an English Bulldog will live for around 8 to 10 years. However, some people have reported that their bulldog lives are much shorter than this average. A lot have died from heart-related issues.

This dog’s face is very recognizable due to its pushed-in nose and droopy lips. These dogs are seen as amiable dogs with very bold and dignified personalities. 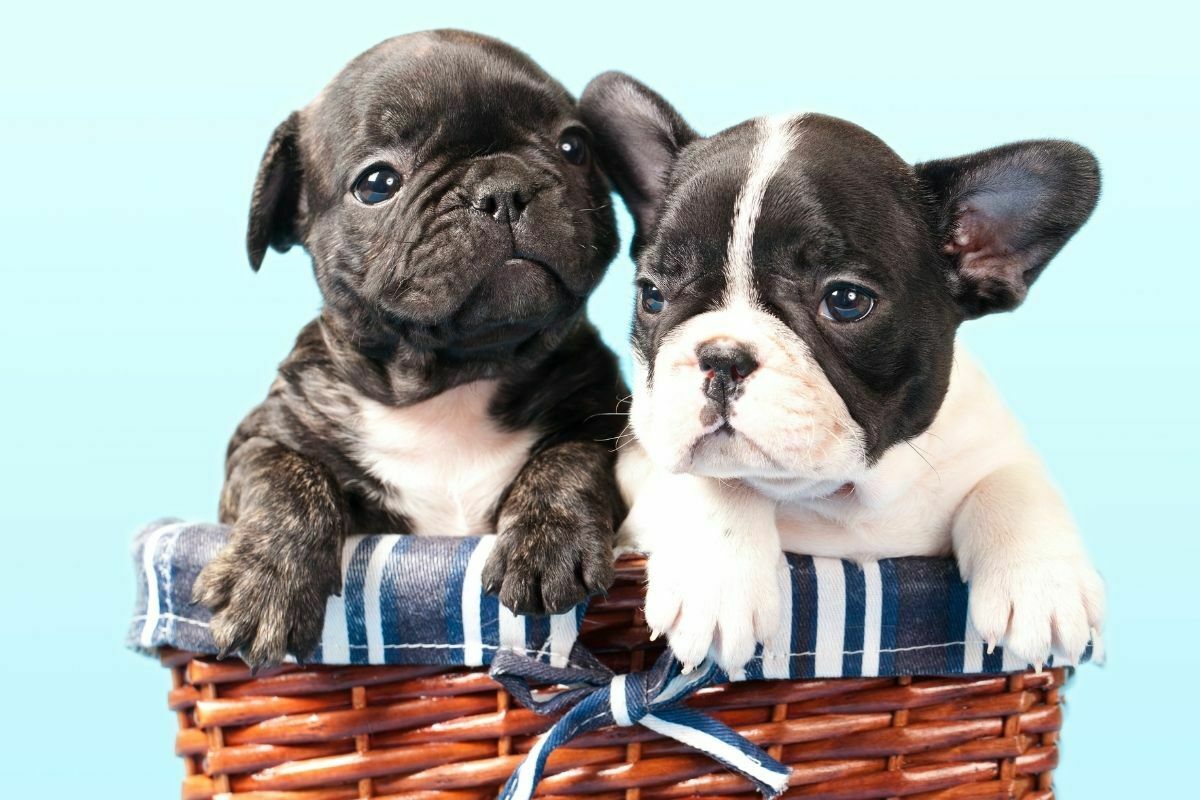 The French Bulldog, on average, will live for around 10 years. This breed of dog has grown in popularity in recent years. This is due to their small size, which makes them ideal for anyone who lives in a small apartment with not much space.

Overall, this breed of dog loves to play and have fun. For a lot of people, what they like about these dogs is their pointed ears and smushed faces. 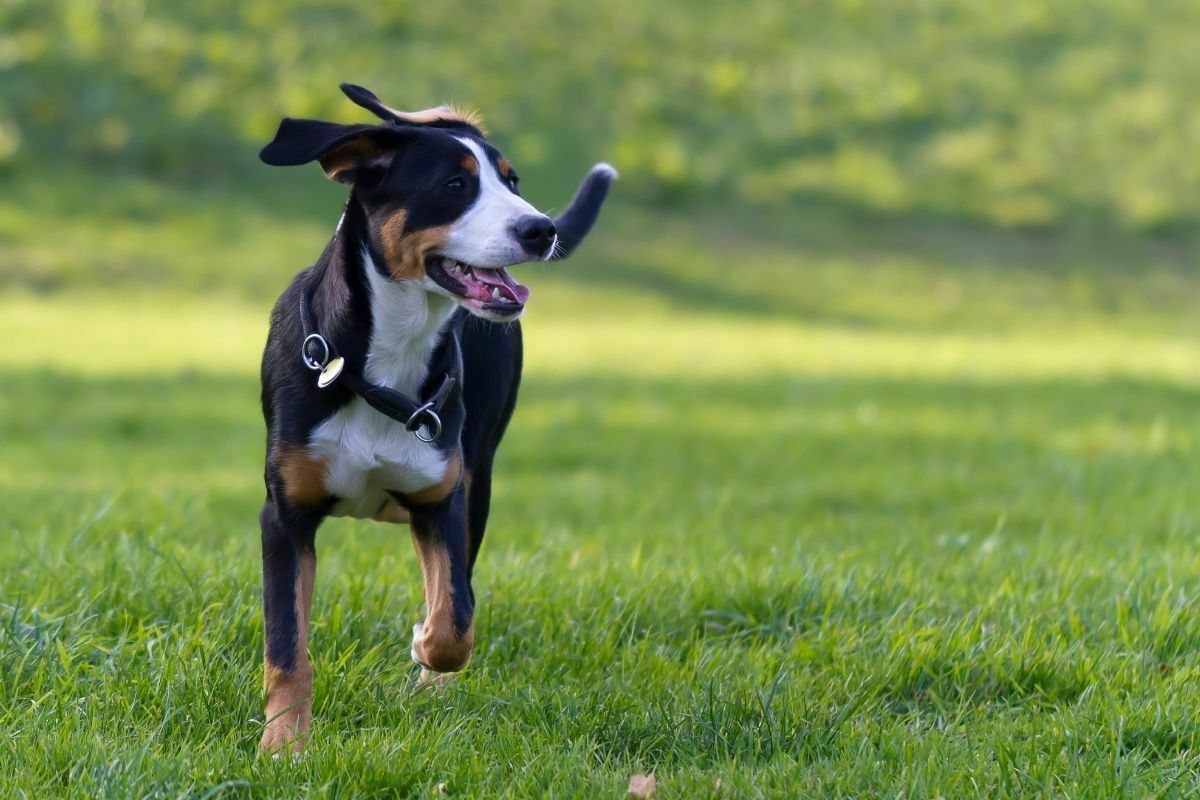 A Greater Swiss Mountain dog can be expected to live around 10 to 11 years. These are very caring and supportive dogs. They are loyal and very faithful dogs who are known for their short black coats with white and tan markings. Known as either a family dog or a working dog. 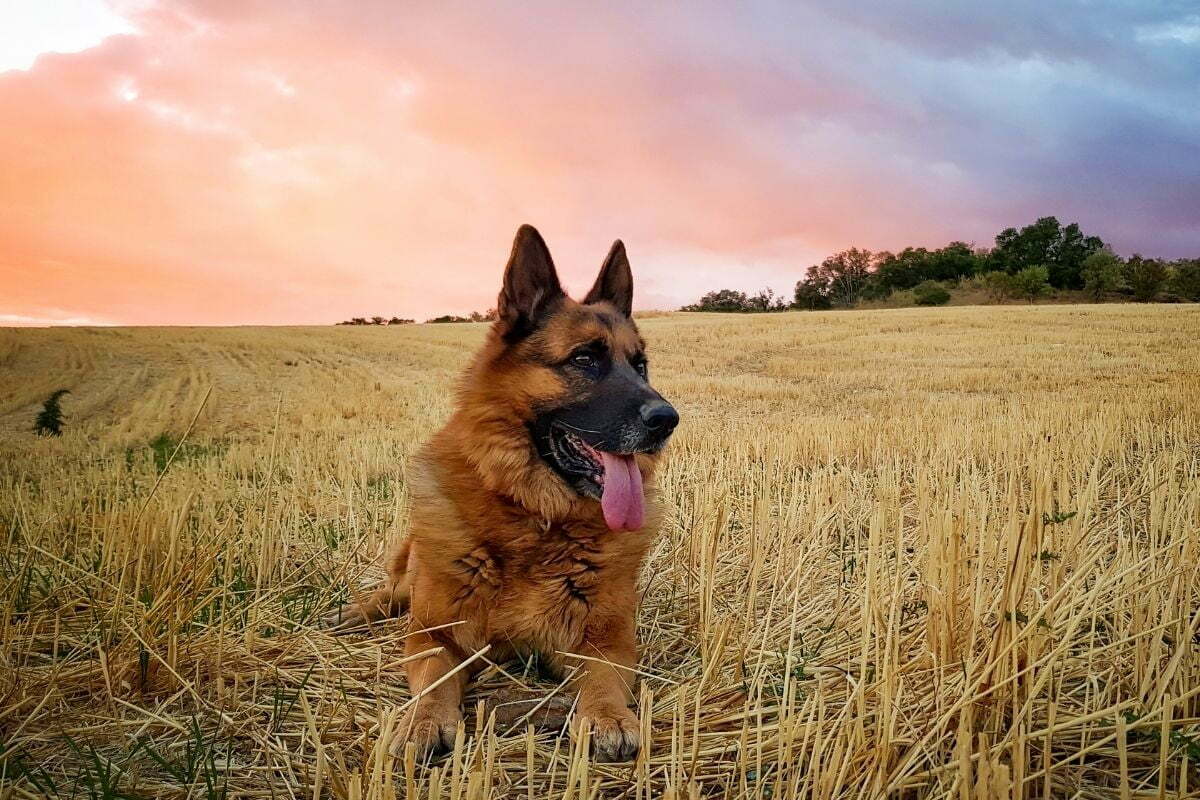 The German Shepherd can live for around 9 to 12 years. They are known to be the second most popular dog breed in the United States.

These dogs are known for their loyalty, intelligent acne, and loving nature towards their owners. Making them the ideal pet for anyone, including families.

These dogs typically die from hemangiosarcoma or osteosarcoma. However, other diseases such as Addison’s Disease shorten the lifespan of these loveable dogs. 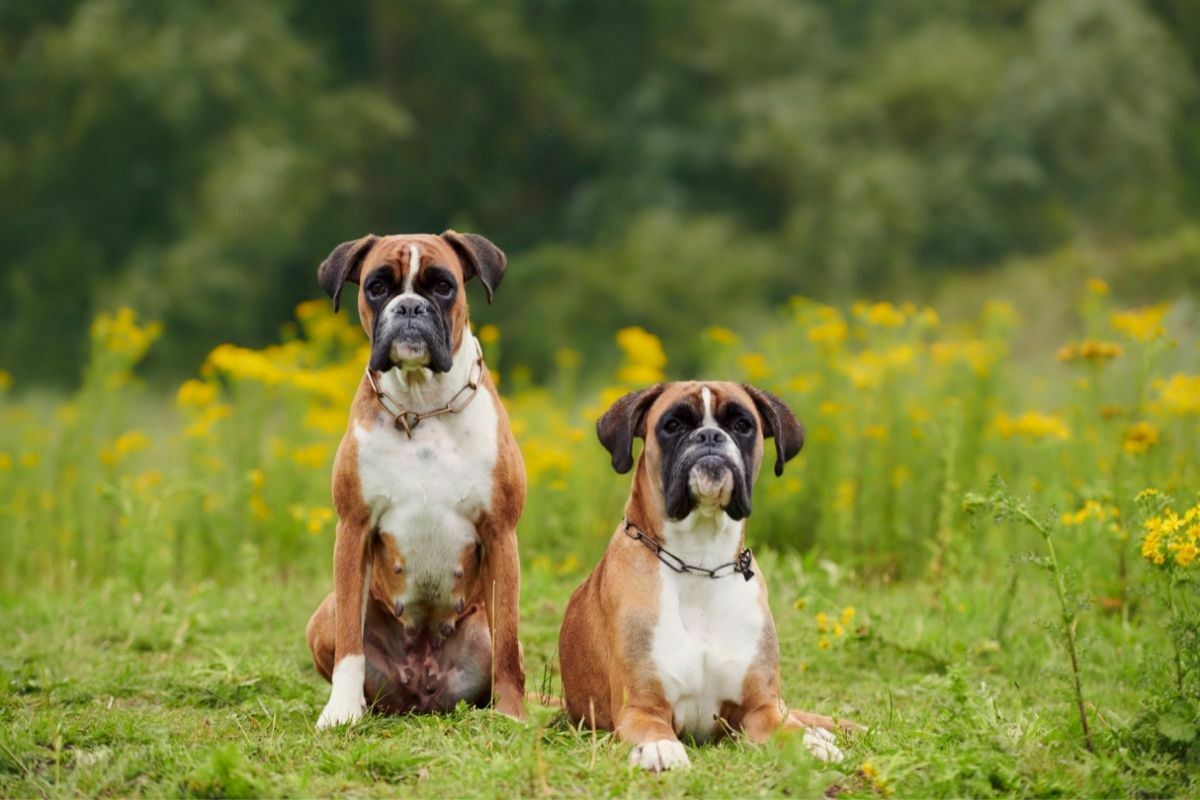 Boxer’s can have a very energetic personality and are known for sometimes being quite silly and goofy. These dogs are known for being very protective and loyal to their owners and family.

Although on average, they only have a lifespan of around 10 years. This is because this breed of dog is very prone to developing cancer. 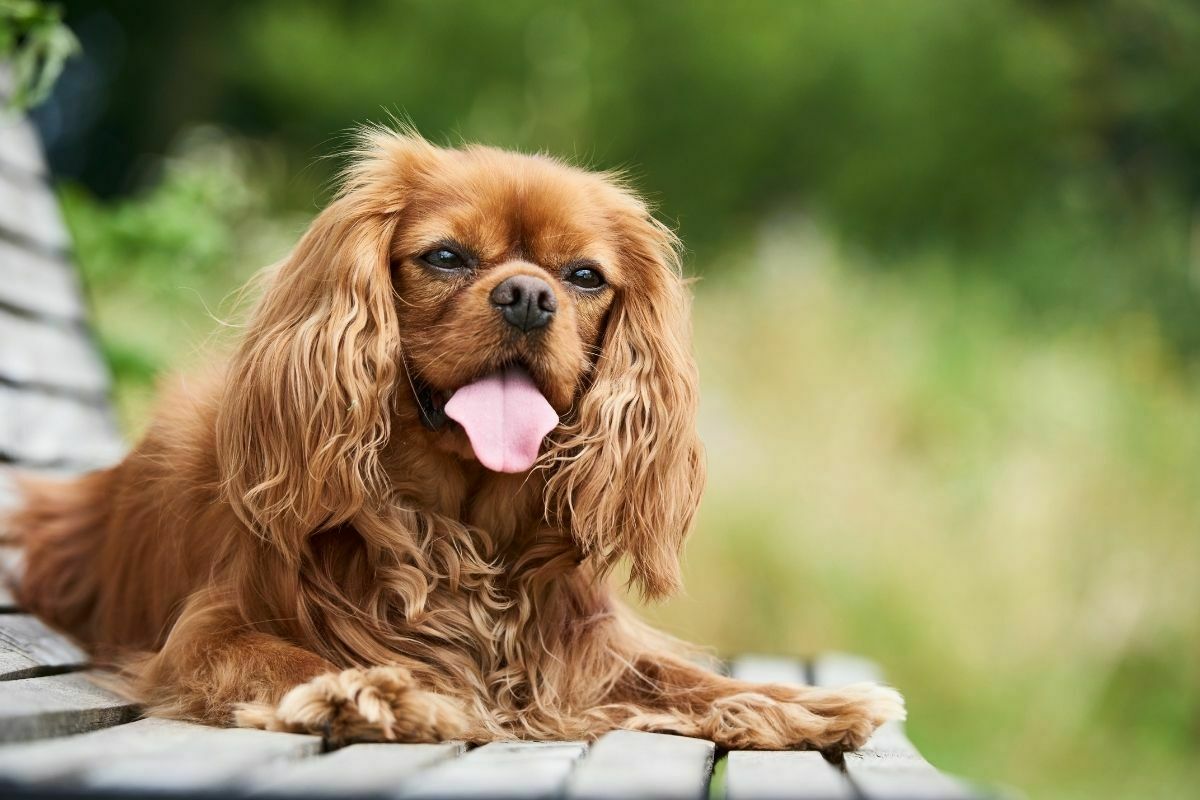 The Cavalier King Charles Spaniel has a life expectancy of around 9 to 12 years. These medium-sized dogs have very gentle and kind personalities. This breed of dog was once owned by British noblemen and royalty.

Overall, these are great pets to have a cuddle with on the couch and play in the garden with. A lot of Cavalier King Charles Spaniels suffer from Mitral Valve disease, which can cause the shorter lifespan of this dog. 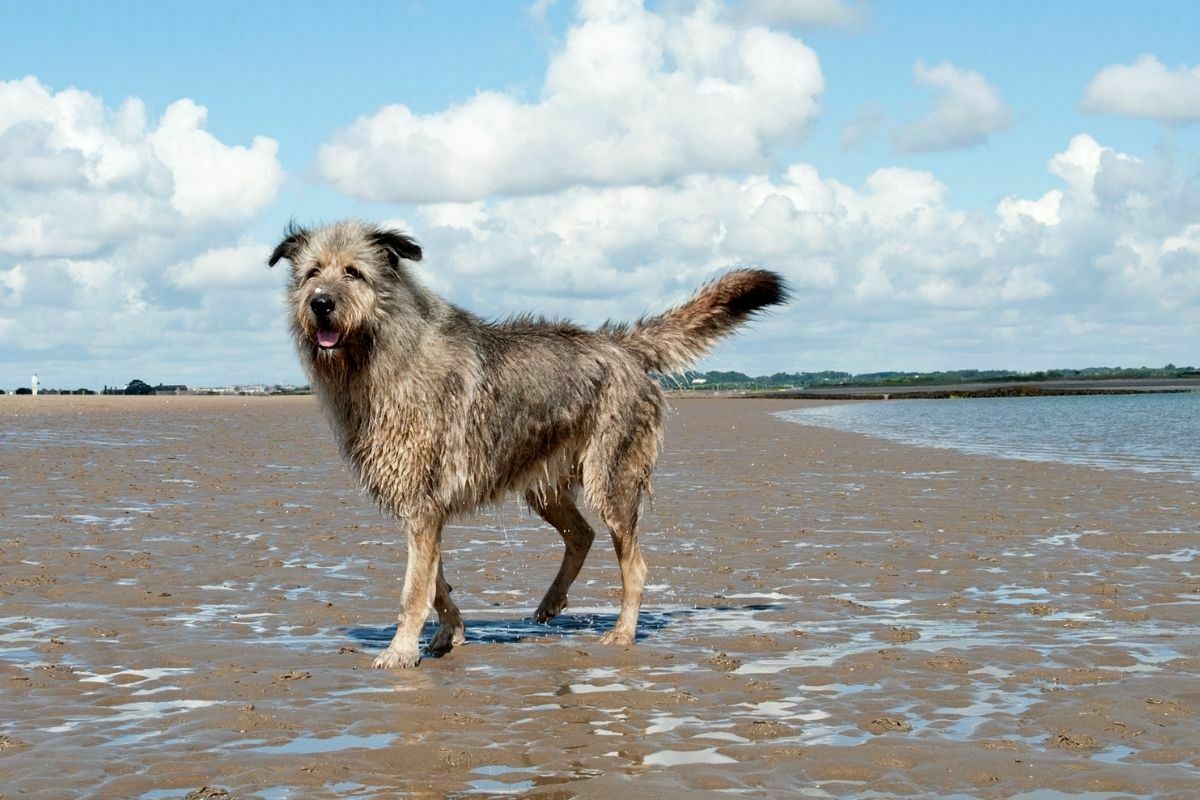 The Irish Wolfhound has one of the shortest lifespans on our list. On average, they can live for around 6 to 10 years. These are quite large dogs, and this is the cause of their short lifespan. Due to being so large, their bodies struggle to carry all the weight that they have.

These dogs are swift runners and very protective of their owners. However, it is their size that lets them down. Also, as they grow so fast, this decreases their lifespan even more.

On average, a dog will live for around 12 to 15 years. However, due to the genetic makeup of some species of these dogs, they don’t live anywhere near to that average. Some breeds of dogs are more prone to certain illnesses, which can also reduce their lifespan.

In this article, we have gone through the dog breeds that are known to have the shortest life spans. Just because they may have a short lifespan doesn’t mean they can’t bring you a lot of joy into your life.

The short lifespan shouldn’t put you off getting one of these breeds of dogs.