Did you know that the color of your dog’s gums could tell you a lot about your dog’s health?

It’s easy to tell when a human’s sick; there are so many signs, like pale skin, tired eyes, etc.

In the same way, you can tell that your doggy is sick just by looking at some areas, like their gums!

In fact, a dog’s gums change color when he’s going through some illness.

They could turn various colors like reddish, yellow, blue, etc.

Let’s jump right in, shall we?

How To Examine Your Dog’s Gums The Right Way!

Before you panic about your dog’s pale gums and wonder about the pale gums in dogs’ symptoms, let’s talk about how we should examine your dog’s gums the right way!

This’ll surely save you a lot of worries!

Catch a hold of that furry ball of yours and lift up your doggy’s upper lip to reveal the gums.

Now, the ‘normal’ color of the gums depends on your dog’s breed, but, usually, the normal color is between salmon pink to bubblegum in color.

In fact, some breeds will also have doggie black gums. It just depends!

Step 2: Make A Note of Your Dog’s Actual Gum Color

So, you’ve got your fingers in your dog’s mouth while he’s looking at you like you’re crazy…

You must be thinking about why you’re doing it!

You’re doing it so that you can ‘click’ a mental picture of your doggy’s healthy gum color so that you know there’s something wrong with your friend when the time comes.

This ‘assessment’ shouldn’t be a one-time thing!

You should check your gums routinely, maybe about once or twice a month, to make sure that all is a-okay with your doggy friend!

After all, prevention is better than cure.

Blue, Red, Yellow, or Pale Gums In Dogs and What They Mean!

So, as I mentioned before, a dog’s gums can say a lot about the dog’s health.

Let’s go over what they all indicate, shall we?

There’s an important thing to note.

If you see any abnormalities in your dog’s gums, visit the vet immediately, and they’ll know what to do.

Don’t procrastinate! This could be very harmful to your little doggy friend…

What Causes Pale Gums In Dogs?

It could get a little technical, but bear with me!

So, kidneys produce a hormone in your doggy’s body called erythropoietin which basically tells the bone marrow to cook up some red blood cells.

This means that when the function of the kidney gets impaired somehow, lesser amounts of erythropoietin are made.

This makes your doggy anemic and develops those pale gums.

This is a tricky one as it can be caused due to several factors.

Let’s go through a few of them, shall we?

○ Your doggy could have been internally injured after a traumatic event, like getting hit by a car
○ Stomach ulcers can also trigger internal bleeding. In this case, keep an eye out for your dog’s black, tarry stools
○ Damage to the doggy’s kidney, liver, or spleen.
○ Splenic mass could have ruptured and bled. In this case, look out for lethargy, collapse, and belly fluid

If your doggy’s body has been in shock, the blood could be concentrated in specific parts of your furry friend’s body.

What does this mean?

This means that blood flows to the important organs, like the heart, and not to extremities like your doggy’s gums.

In this case, you should take your dog to the vet as soon as possible.

Well, in some cases, the doggy’s blood doesn’t normally coagulate.

This means that your dog is predisposed to excessive or abnormal bleeding.

Thrombocytopathy and thrombocytopenia are some blood clotting disorders that cause pale gums in dogs.

This is a tricky one.

In this condition, your doggy’s immune system basically attacks itself.

Similar to Hemolytic anemia, where the immune system destroys the dog’s red blood cells, which can cause pale gums and anemia.

But, get this diagnosed by your vet!

If your dog has a distended and swollen abdomen and is stressed and vomiting, then, this may be a case of bloating!

In this, your doggy friend may have white gums.

Well, the pale gums appear in this case just because the stomach torsion basically stops the blood from returning to the heart from the lower body.

Pale gums in dogs could be because of a heart problem.

This causes a drop in the doggy’s blood pressure and causes a variety of symptoms like:

Do get your doggy friend checked out by your vet to find the right course of treatment!

Parasites can be found in doggies with many intestinal worms like hookworms.

But, there’s a catch!

These can also be found in dogs that have a severe flea infestation! Fleas can consume up to 15 times more of their own body weights!

This could cause parasitic anemia, and tick-borne diseases could also cause anemia.

Heavy metal toxicity, like Zinc toxicity, could cause pale gums in dogs.

This is because Zinc basically interferes with iron absorption, which produces red blood cells. This triggers anemia.

The doggies affected can develop pale or yellow-colored gums. This also comes with the yellowing of the skin turning brown, and an orangish tint to the urine.

This is a serious condition, as some doggies can even show early signs of acute kidney failure.

Go to your vet!

Did you know that rat poison could cause pale gums in dogs?

That’s because rat poison is known to contain warfarin, which is an anticoagulant. This anticoagulant causes the doggy to bleed profusely.

Keep the rat poison away!

Some forms of cancer can cause a decrease in the production of red blood cells, which causes pale gums in dogs. 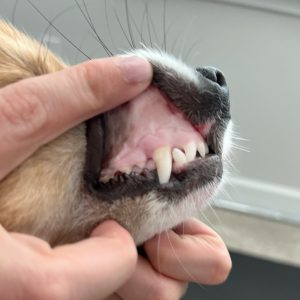 These are usually found in cancers that affect the spleen and the liver.

They also lead to internal bleeding in the abdomen.

Many serious medical issues require professional care. But as the old saying goes, “an apple a day, keeps the doctor away,” and this holds the same for your dog. Not literally, of course!

Even watching your pup’s food intake and maintaining a balanced diet can prevent iron deficiency, leading to anemia.

Other than that, keep your pup happy!

Your doggy’s gums can tell much about your friend’s health.

So, you should make a point to check them regularly to know that everything’s a-okay with your furry bundle of joy!

Gums can be of many colors, like red, yellow, purple, or pale when your dog is sick. They all mean different things.

If you feel that your dog has pale gums, stop reading this article and call the vet to know what’s wrong!

I hope this article helped you figure out everything you need to know about pale gums in dogs.

If you still have any questions, my contact information is below. Please reach out, and I’ll be happy to answer!

3 thoughts on “Pale Gums in Dogs: What You Need to Know”