Chihuahuas are one of the more distinct canines in the animal kingdom. Known for their tiny stature, large heads, and commonly possessing an attitude, Chihuahuas are often prized for being ideal indoor dogs.

They are brachycephalic, which means they have a very short snout that gives them a distinct look.

Small, brachycephalic dogs also tend to have smaller litters too, so it’s no surprise that they breed with smaller litter sizes than most other canines.

Here you’ll find out just how small those litters can be. Below we have the average litter size of most Chihuahuas, how that changes as the Chihuahuas get older, and more.

We’ve even compared the small litters of Chihuahuas with other canine species so you can appreciate and better understand how small they can get.

This one to three average range is mostly first-time Chihuahua mothers, who have smaller litters than Chihuahuas who have bred before.

The age of the Chihuahua corresponds to how large the litter will be, so expect an older Chihuahua to be capable of having larger litters than the average.

We can’t say exactly how big or small the litter of any dog species will be as it depends on so many factors. As it stands, a first-time Chihuahua litter exceeding three pups is unusual.

Given the small stature of Chihuahuas, complications can arise during birth. Because of this, many Chihuahuas deliver their litters via C-section instead of giving traditional birth.

If a Chihuahua has bred before, you can expect as many as six puppies from their litter. These largest litters tend to be their fourth birth, after which you can expect the litter size to decrease again.

Professional breeders insist that breeding a Chihuahua female more than four times is bad for their physical and mental health.

The small bodies of Chihuahuas and the large heads of their babies are a recipe for disaster, so a Chihuahua should only be put through pregnancy three or four times before you let them rest.

With larger litters, it’s common for there to be more runts among the litter.

These underweight puppies need more assistance and maybe even medical attention to survive, which is why veterinarians recommend a cesarean section when a Chihuahua has to deliver its litter.

The current known record for the largest litter of Chihuahuas is held by a dog in Kansas. In March of 2018, this dog gave birth to eleven pups.

The Chihuahua was called LOL, for Laugh Out Loud, and had been rescued from its previous owner in its pregnant state. They were given to new owners who anticipated the birth of the eleven-month-old Chihuahua’s litter.

Five days later, the time came for LOL to give birth. Having previously contacted the foster mom of the dog, they were expecting eight pups.

Instead, they were greeted with eleven! What’s even more unprecedented was the fact that none of them had any obvious health defects and were all breathing when they arrived. The day they arrived was March 23rd, America’s National Puppy Day.

LOL beat Coco the Chihuahua for the world record of largest Chihuahua litter. Coco was a British Chihuahua who had given birth to ten healthy pups as part of her 2011 litter.

Chihuahuas are recommended for C-sections over a natural birth. The reason why is simple – birth can be harmful to both the mother and her young.

The physical makeup of Chihuahuas can make birthing much more difficult. Most mother Chihuahuas will have narrow hips that won’t handle large Chihuahua pup heads well.

If a pup gets trapped in the birth canal, this can spell death for the pup, the mother, and even the rest of the litter that has yet to be born.

Does that mean C-sections are a necessity? Absolutely not, many Chihuahuas have natural births that result in all or most of the litter surviving.

As we covered above, sometimes even the most intense natural births can result in all pups being alive and well.

Chihuahuas can be expensive dogs to buy and keep in some areas, and this extends to the precautions owners are asked to take when their Chihuahua must give birth.

The average cost of a Chihuahua C-section can be as low as $500, typically when the procedure has been planned in advance and so the risk has been minimized.

On the other end, however, emergency C-sections can cost you as much as $2,000, more if there are complications that require specialized equipment and techniques.

Chihuahua Litters VS Other Breeds 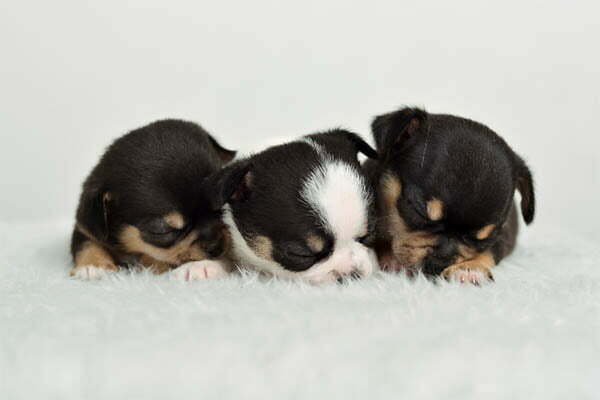 With the average Chihuahua litter size at just one to three pups, they’re at the smaller end of the spectrum of dog litters.

Taking a large and hardy species like the German Shepherds as an example, their average litter count is eight puppies per pregnancy. Slightly smaller dogs, like Beagles, can expect that figure to be slightly smaller too at six pups.

The laws of supply and demand dictate that Chihuahua pups are more expensive due to how small their litters are and the complications that come with Chihuahua births.

If you were wondering why they can get pricey, now you know why. It’s not just because of their cute appearances.

Now that we’ve learned about Chihuahua litter sizes, let’s check out the average litter sizes for the country’s most popular canines.

This way, you can better appreciate how much smaller Chihuahua litters are to the average dog. We even found the smallest dog litter, even smaller than the Chihuahua!

Why Are Litter Sizes Small?

In a word – brachycephaly. Chihuahuas have been domesticated and bred over thousands of years. Thought to have descended from the Techichi owned by Toltec civilizations, Chihuahuas have always had large heads and little snubbed noses.

The extent varies, which is why we have the terms deer-head and apple-head to distinguish the head shape. No matter the head shape, the species as a whole suffers from smaller litter and dangerous births because of their big heads.

Many dogs are brachycephalic. The most infamous one is the pug, who requires a sanitized face to avoid infection and frequently suffers from breathing issues.

Other small dogs like Shih Tzus and chow chows suffer from the same circumstances but even larger dogs like bullmastiffs can have issues too.

How Often Can Chihuahuas Breed?

In twelve months, a Chihuahua should never attempt to have more than one litter of puppies. Even then, if you are a breeder then the recommended practice is to let them get pregnant every other year so that their small bodies have time to recover.

This is especially the case with C-sections. As a medical procedure, the dog needs time to heal and rest, and so it would be tantamount to abuse if you purposely let them get pregnant again.

If you’re looking to buy, you can dispel a lot of Chihuahua breeding concerns by asking two questions of a breeder you trust.

First, when was the last time the Chihuahua was pregnant, so you can make sure it hasn’t been pregnant in that twelve-month window. Then ask how many litters the mother has delivered.

If that number is over four, you’re likely dealing with a breeder who doesn’t have much concern for the health of their animals. Don’t incentivize this bad behavior by buying from them, you can find responsible breeders who will give you a healthy litter.

How Long Are Chihuahua Pregnancies?

Planning the birth dates of your dogs is important but it becomes even more important with Chihuahuas. You’ll need to book C-sections if you’re going that route, and so you need to know exactly how long a Chihuahua pregnancy is.

The average length is the same across almost all dog breeds – 63 days. With this number in mind, all you need to worry about is accurately diagnosing the pregnancy so that it doesn’t creep up on you.

Check for pregnancy signs to make sure you catch the pregnancy as soon as possible and can plan out 63 days ahead from there.

While Chihuahuas make great indoor pets, you must know the dangers that come with their small size. Whether you’re a breeder or a buyer, you need to take extra care of Chihuahuas, especially when they fall pregnant.

If unsure about the health of a pregnant Chihuahua, remember to take them to the nearest qualified professional.

Veterinarians can help you plan out the pregnancy of a Chihuahua after they accurately diagnose it, which is usually around twenty days of conception.

They have the professional gear to conduct ultrasounds to show you that your dog is pregnant and make an estimate of how many puppies there are.

A more solid figure can come at the forty-day mark after your veterinarian can perform an X-ray exam. If the image is accurate enough, they can even count how many skulls are visible in the womb.