A pretty rare sight is seeing turtles slapping each other, and for us, it can be a pretty entertaining and fascinating sight.

However, turtles themselves do not do this just for fun. There is actually a reason as to why they do this – not just one singular reason. There can be a lot of different explanations behind turtles hitting each other. 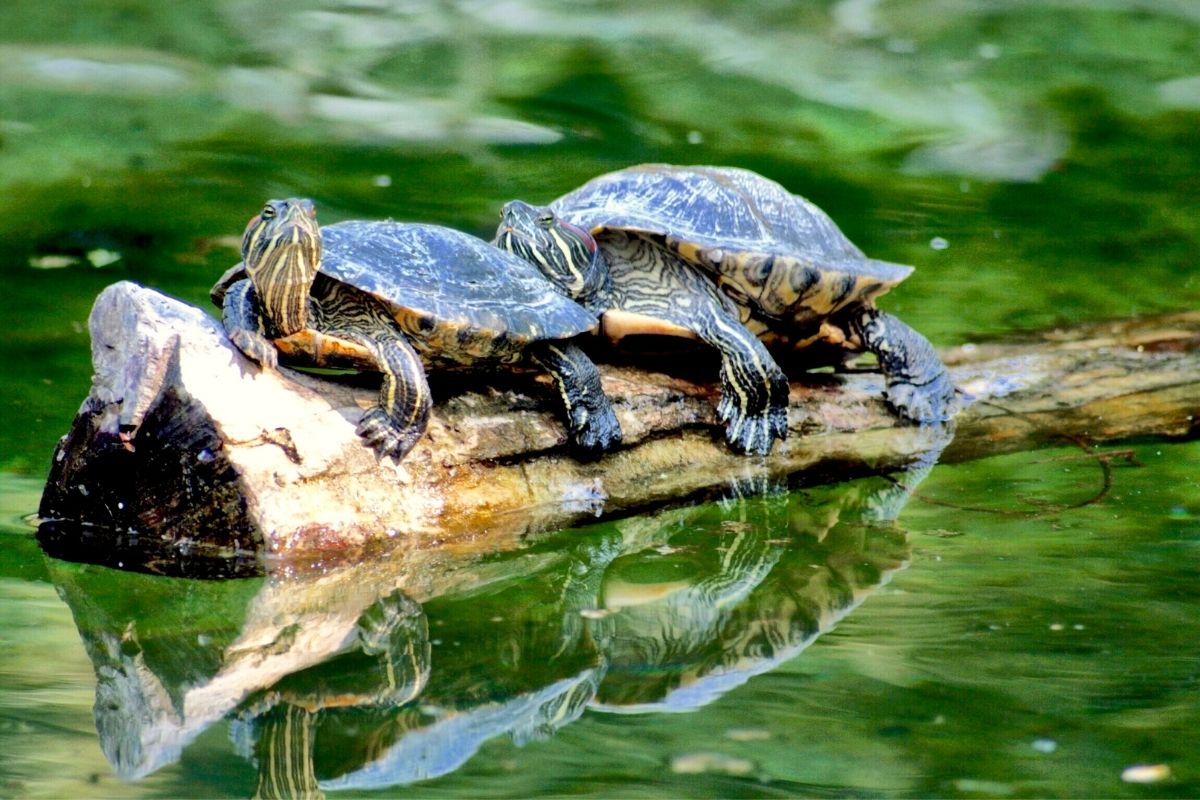 Turtles will hit each other for a lot of different reasons – it can be to show affection of some kind, or it can be a way of asserting dominance.

Turtles hitting each other is not totally uncommon – it is something that can be done by male turtles as a way of showing off in front of female turtles.

Small breeds of turtles will hit each other in a pretty speedy manner, big sea turtles are not recognized for hitting each other at a quick pace.

Bigger turtles will mirror us humans in the way that they hit each other – they tend to just go for one big slap, and then they’re done with it.

First, let’s discuss why male turtles might hit female turtles. This is something that will usually be witnessed in the spring seasons – this is when turtles will tend to want to mate.

In some sense, it could actually be argued that the male turtle is attempting to stroke the female turtle’s face, but naturally, this will just look like a slap.

It is true that the male turtle will usually react to this sign – he will leave her alone, and he will try to get her attention later.

The male turtle will not be hurting the female turtle during this process – but he will keep trying to get her attention.

If the female turtle enjoys the attention of the male turtle, then she will indicate this pretty clearly.

Why Do Young Turtles Hit Each Other In The Face? 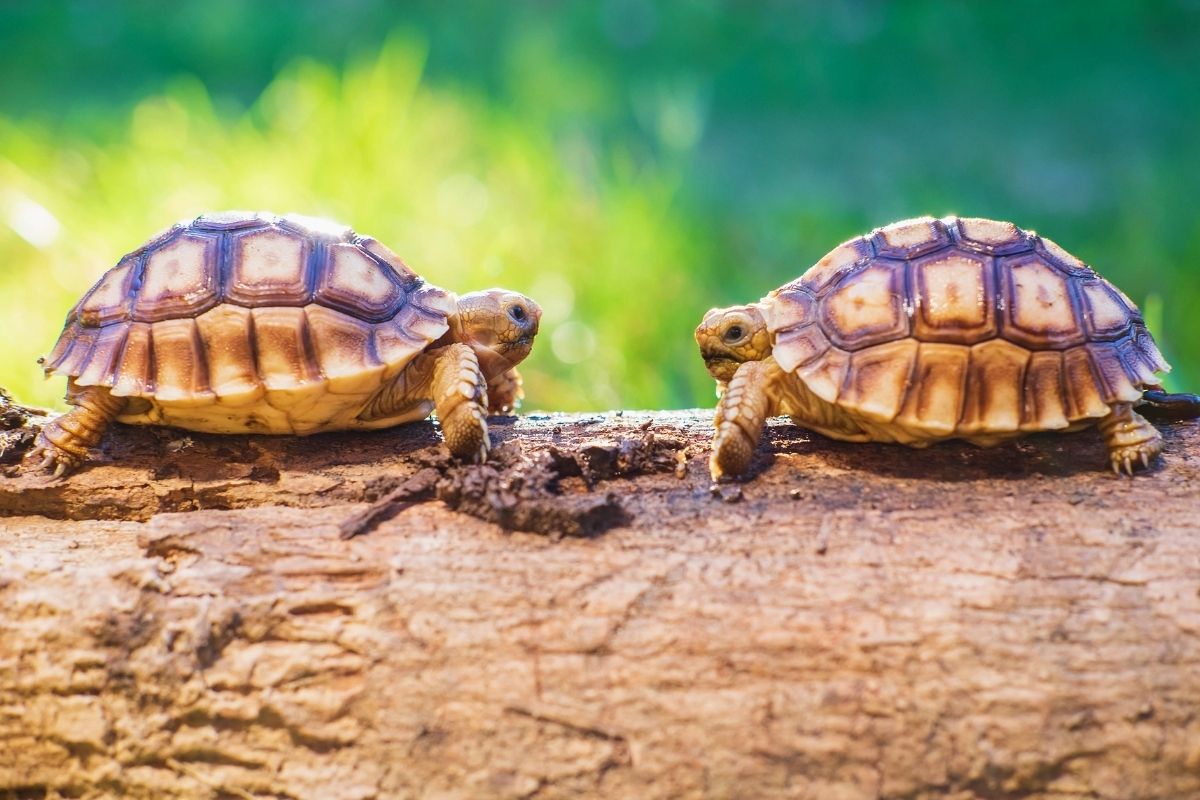 Here’s the thing, when it comes to young turtles it is pretty clear that they have not reached the stage of maturity where they are able to mate. So, why on earth would they be seen hitting each other in the face?!

For young turtles, hitting each other in the face is all about playing.

This is a crucial part of their growth and development, because like all other animals turtles will grow and develop through play. Hitting each other in the face is all part of the playing process of their youth.

Why Do Male Turtles Hit Each Other In The Face?

Male turtles might hit each other in the face as means of showing their dominance and their authority over a certain kind of terrain.

It is their equivalent of marking their territory. Fighting turtles is not ideal, and this is not something that you are going to want in a tank environment.

However, there are some ways that you can reduce turtle aggression in a tank environment. You need to make sure that your tank is big enough to hold the turtles that you have.

Giving your turtles plenty of space is really important, and if you have more than just one turtle then you should make sure that the turtles have more than one kind of area to bask in.

Making sure that the water in the tank is clean is super important, this is due to the fact that dirty water can make turtles really sad, ill, and also really angry.

You should be sure to install a filter that can handle the volume of water that you have in the tank. A filter is especially important for the turtle tank, and this is because turtles make a lot more waste in comparison to fish.

You also need to make sure that you keep your turtles well-fed, and this is because a lot of turtles can become angry when they are not getting fed enough.

The best way that you can ensure that you do not run into this issue is to make sure you keep your turtles fed every day.

If you have tried all of these suggestions, and you still notice that the turtles are fighting then you might have to just separate them from each other completely.

If you do not do this then they can end up harming each other. The truth about turtles is that they are especially territorial and in all honesty, there is not always a way that you can remedy this.

How Can You Tell If Turtles Are Fighting With Each Other? 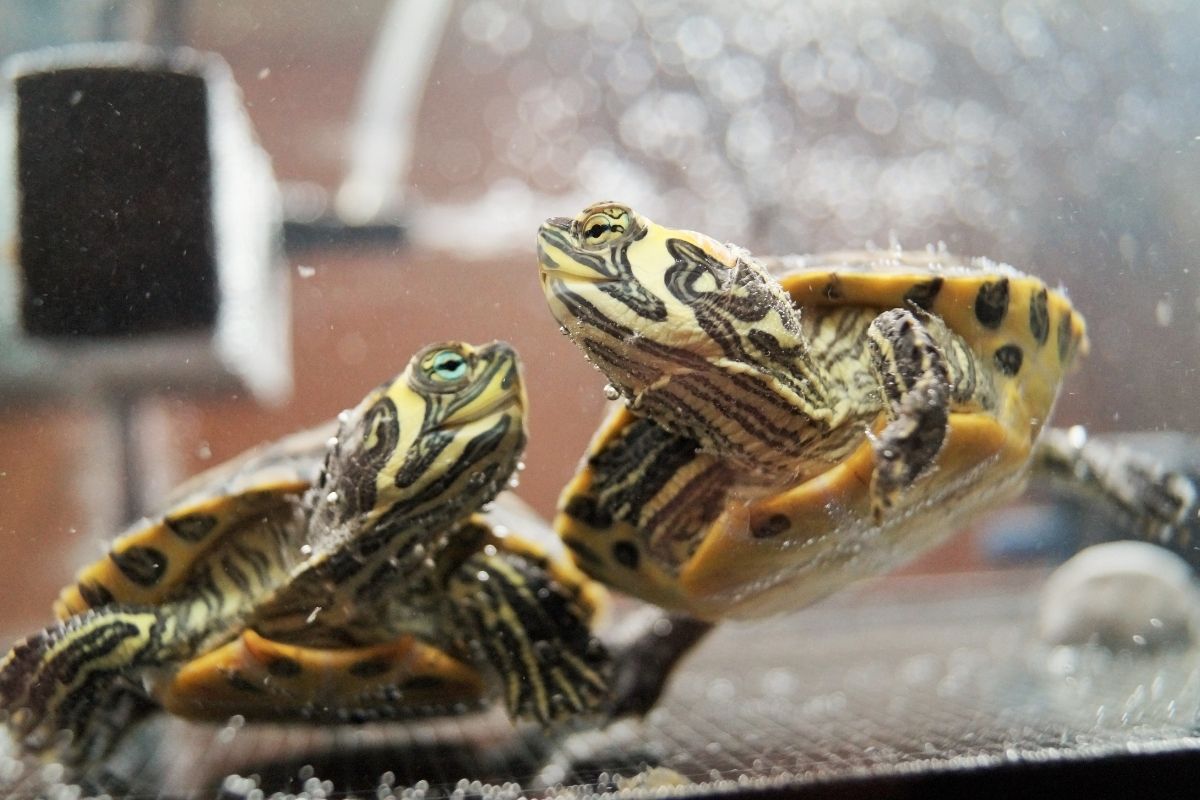 So, when you see turtles getting into a fight then you will be able to notice some distinctive physical movements.

For instance, you will see their front legs fluttering in the face of the other turtle – and the fight will usually be to do with dominance.

The more dominant turtle will be trying to force the other turtle out of its space. Eventually, the turtle that is not so dominant will leave the space – and this is how the fight will come to an end.

There can be some instances where the more dominant turtle will actually start chasing the other turtle.

This is in cases of serious aggression – and the more dominant turtle can resort to biting the other turtle on the tail, or on the legs, or even on the neck area.

This kind of biting will contrast with the way in which a male turtle would try and seduce a female turtle.

A male turtle biting a female turtle would be much more aggressive; this can actually harm the other turtle.

If this is the way that your male turtles interact with each other, then this is a cause for concern. This would be a strong reason to separate your turtles. After all, you would not want them to hurt each other.

The biggest indicator that a turtle is comfortable with you is that it will move towards you. That’s about it.

If a turtle is trying to show affection to another turtle then they might flutter their legs in another turtle’s face, this will be much more playful than when they are fighting.

In all honesty, it is much easier to see turtles’ aggressive behavior than it is to spot their affectionate behavior.

Overall, it is surprisingly normal for turtles to hit each other in the face. Turtles will do this for a few different reasons – the younger turtles will hit each other as a way of playing. This is a vital part of their growth and development.

Male turtles will hit female turtles as a sign of affection and as a sign that they are interested in mating. This is more common during the springtime, as this is mating season for turtles.

However, male turtles might hit male turtles as a way of showing dominance and authority; this is their way of marking their territory.

There are things you can do to try and remedy this in your turtle tank. You just need to make sure that your turtles have enough space to swim around and enjoy themselves.

You don’t want your turtles to constantly feel threatened by each other and to be constantly fighting.

Turtles hitting each other might be entertaining at first, but if it goes on for too long and becomes repeated behavior then this can be worrying.

You also need to make sure that your turtles can have space from each other – this is where strategically furnishing the tank comes into play.

If you notice that nothing that you do seems to work, then you might have to resort to separating the turtles so that they do not end up hurting each other.