The French bulldog is a good dog with some structural problems that pet owners should be aware of.

Frenchies are basically a brachycephalic breed that is short and compact with a screw tail. It is prone to some health problems associated with these conformational features.

Below are some of the French bulldog health problems that could be inherited from their parents or due to lack of nutrition. 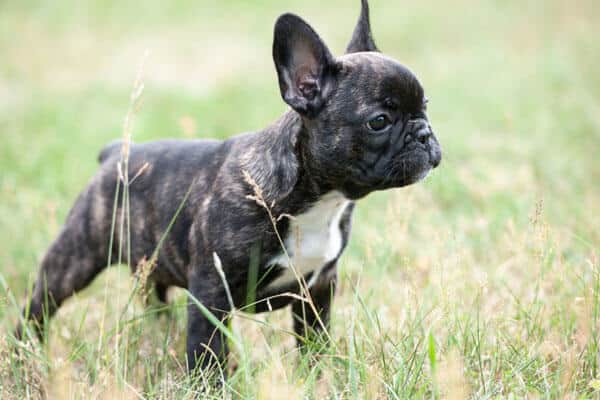 Although small in size, the French bulldog is very solid in height and weight, which can be quite deceptive.

The breed is known as a miniature mollossoid with huge head and solid body. As compared to other breed, the height of the French bulldog at the shoulder relative to the muscle and bone weight ratio is amazing.

Male frenchies weighs around 14kgs and female frenchies is around 12 kg. In spite being small their strength holds it in very good stead.

This is a hardy breed because they have good bone and ligament strength. They are less likely to break bones or hurt themselves. The Frenchies when well taken care off may live longer between 12 to 16 years of age.

Hare Lips/ Cleft Palate – being brachycephalic head and short body make them more prone of having midline defects. The most common defects seen are hare lips and cleft palates.

To prevent such occurrence the breeders give them extra folic acid and zinc.

Hip Dysplasia – the bone disorder occur if their ligaments are tight. If you want you can screen hips before breeding. Those with excessively loose or shallow hips should not be breed.

Knees / Stifles – some instances of slipping patellas – uncommon, seen most of the time in combination with loose ligaments and straight stifles.

Back Problems – Older Frenchies is less likely to have this problem. The problem is due to intervertebral disc issues, which can lead to hindquarter paresis, to severe cases that lead to complete paralysis. The frenchies will respond to anti-inflammatory treatment. Some Frenchies inherit the disorder to their parents.

Spondalytis – degenerative changes on spines of older dogs. They respond well to treatment.

Cherry eye – this defect is an everted third eyelid with the gland below is exposed. This is next to loose eyelids as well as eye inflammation. This is usually seen on frenchies at 6 weeks and under 6 months of age.

Corneal Ulcers – is common since French bulldog have large eyes. They respond well to treatment, as long as it is on time and effective. Those that are not responding well to treatment need to undergo reassessment and or may undergo surgery.

Pannus – deposition of the black pigment on the cornea and drying of the cornea. It is commonly seen in older Frenchie.

In many breeds it is known to be an autoimmune condition. Once the black pigment starts to accumulate on the cornea, normally in the medial edge with inflammation on the outer part of the pigmented area, it cannot be stopped.

The condition can be controlled but it requires more time.

The pigment will cover the whole cornea eventually that might lead to blindness. Cortisone drops is used to treat the condition. A Liquifilm eye ointment is also used to keep the cornea moist.