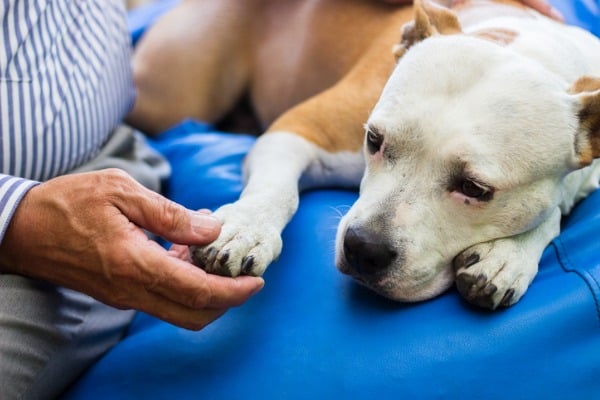 Dogs experience random bumps, lumps, and knots all over their bodies.

It’s stressful when we can’t ask them about it; does it hurt?

When did this show up?

The good news is that bumps on your dog’s body – paws included – have a lot of explanations that don’t involve scary diagnoses.

New growths should always be checked out by a vet, of course.

However, the culprit could be as simple as a pesky insect that bit your dog.

Even if it’s not so simple as that, growths on your dog’s paw can usually be treated easily and aren’t anything to stress over.

So then, what could it be?

Read on to discover the common causes of a bump on your dog’s paw.

Questions? To chat with a veterinarian about red bumps on your dog’s paw, Click here 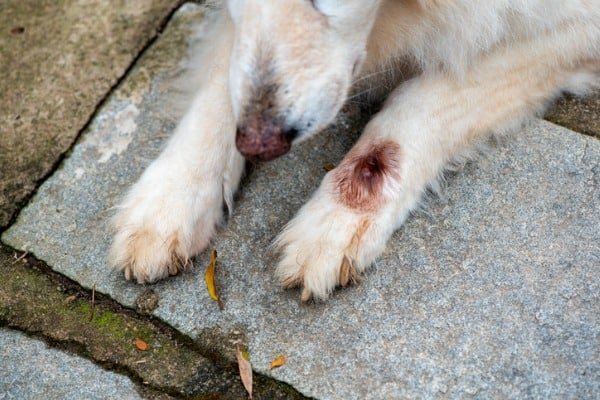 It’s a fact of life that dogs and people alike get attacked by annoying bugs from time to time.

A red bump on your dog’s paw could be a mosquito bite.

Many dog breeds have thinner fur around the paws, and the skin tends to be thinner as well.

Any type of insect bite tends to be more visible and prominent on your dog’s paw.

Mosquito bites are more likely to present themselves as red bumps, but many insects have a bite or sting that could cause a nearly identical spot.

A bee sting or a tick bite can cause a red, raised spot on your dog’s paw.

There are few places in the world where you can live to escape bugs.

If there aren’t mosquitoes in your region, there’s probably bees; if there are no bees, there are probably ants.

So don’t be too hasty to rule out a bug bite – especially if your dog spends a lot of time in nature.

There are some nasty insects out there, like fire ants, deer ticks, and venomous spiders.

While an insect bite might not seem as scary as the prospect of a tumor, it shouldn’t be ignored.

Some of the insects mentioned here – and a plethora of others – can cause painful or dangerous reactions in dogs just as they can in people.

Don’t get too anxious if you live in the range of a particularly mean species of bug.

There are some signs you can look out for to determine if your dog is in distress or is just dealing with an annoying, itchy bite.

Get your dog to the vet immediately if you suspect they are having a severe allergic reaction to a bug bite.

A bump on the paw that you suspect to be a bite or sting can be monitored closely for signs of infection or further reaction.

Additional redness, swelling, or pus are all reasons to call the vet.

There are a lot of insects that are irritating but not dangerous.

That red bump caused by a bite can go down over a few days as though nothing happened.

Luckily for your dog:

That covering of fur on their body also helps protect them from a lot of these types of bits. Paws are a little bit more vulnerable, but most dogs won’t experience many bites or stings in their lifetime.

Is the lump on your dog’s paw actually in between their toes?

Then it could very well be an interdigital cyst.

These growths are red in appearance and are filled with pus or blood, or a little of both.

They can cause pain and discomfort for your dog, making them limp or favor the affected foot.

The hair follicles in the webbing of the feet can become clogged, irritated, and infected, thus giving birth to that nasty cyst in between the toes.

Larger dogs and overweight dogs might be at a higher risk for developing interdigital cysts, although they can affect any breed or size.

Dogs with allergies who scratch or lick between the toes and paw pads can also be at risk for interdigital cysts.

They can often become infected and require antibiotics as part of treatment.

Pain and anti-inflammatory medications can help manage the issue.

Dog booties and extra paw-washing are some of the measures your vet might recommend for preventing this condition. 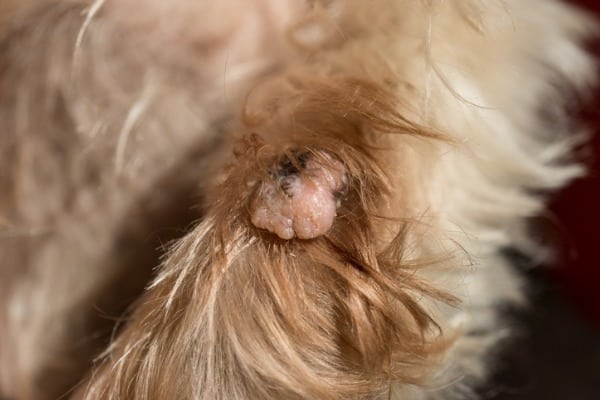 A pink growth on your dog’s paw could be a wart.

If your dog’s skin is darker, the wart could mimic their natural skin tone.

Many warts take on a cauliflower-like experience.

Like in humans, dog warts are spread through a virus.

They’re not, however, able to spread to humans or other pets.

They can spread to other dogs, so if you notice a wart on your pup, it’s best to isolate them until they have been treated or the warts are no longer present.

This means no kennels, no parks, and no daycare.

The virus that causes warts is highly contagious and can quickly spread in closed spaces.

If you have multiple dogs and one has a wart, it’s very likely the rest will develop one.

On the bright side, this is very rarely a serious issue or one requiring any serious medical treatment.

Many warts clear up on their own in a month or two.

If there are many warts present or are somewhere on your dog that causes them issues in day to day life – like between the toes – treatments are available through a vet.

A tumor on your dog’s paw doesn’t automatically mean cancer. In fact, less than half of lumps and bumps on dogs turn out to be malignant.

A fatty tumor is a prime example of a benign growth that could crop up on your dog’s paw.

Also known as a lipoma, fatty tumors can impede mobility and cause mild irritation but aren’t dangerous.

A simple biopsy at the vet can determine if your dog has a lipoma.

Overweight dogs are more likely to develop fatty tumors, and older dogs of any weight have a slightly higher risk of having one.

Some breeds, such as Labradors and Golden Retrievers, are more prone to getting a lipoma at some point in their life.

Most of the time, a lipoma does not need to be removed.

If it’s located somewhere like the armpit or near a joint where it hinders your dog’s movement, it can be easily removed through surgery. 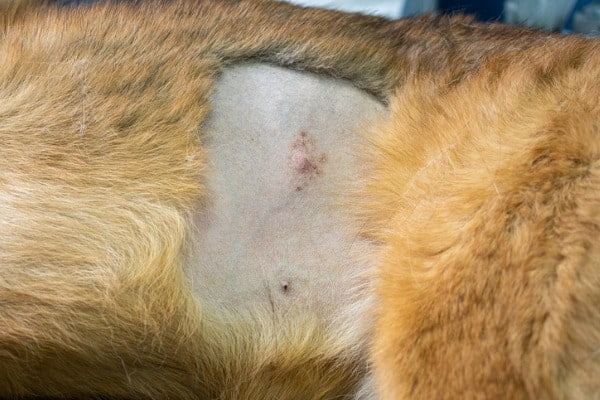 An abscess is an infected sore which is filled with and sometimes oozes pus.

They can cause your dog to feel pretty rotten and even cause fevers – they can also smell and cause a mess in your house if they rupture.

It’s a nasty and painful condition, but it’s usually not immediately dangerous.

They are, however, something you should let a vet evaluate.

Abscesses often need to be drained, flushed, and bandaged.

An abscess is due to a foreign object lodged under the skin, which will need to be removed.

Antibiotics are often recommended if your dog is recovering from an abscess.

The paws can be susceptible to abscesses because paws are already a target to the cuts and wounds, which can trigger an abscess.

You can think of a sebaceous cyst, much like a pimple on your own skin.

Blocked follicles that trap sebum – produced by the sebaceous gland – cause sebaceous cysts to appear on the skin.

They look like large whiteheads and can erupt or ooze a white, thick substance. When they’re still “closed,” they can appear as a red bump.

Some dogs overproduce sebum due to diet, environment, and genetics, making them more likely to develop this type of cyst.

A sebaceous cyst is benign, but it can be difficult to diagnose visually.

When you bring your dog to the vet with any kind of unidentified bump, a biopsy can be performed to determine beyond doubt what you’re dealing with.

It can usually be left to resolve on its own.

Large or infected sebaceous cysts can be drained, and in some cases, antibiotics help clear them up.

Bathing an appropriate amount – not too frequently or infrequently – can help prevent these skin bumps from recurring.

Dog-safe and sensitive shampoos are also a useful tool in overall skin health and preventing cysts and other skin issues. 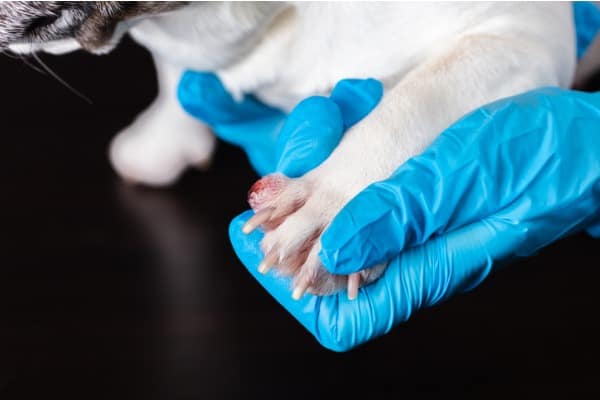 Before you panic, know that a mast cell tumor can be successfully treated, especially when caught early.

This is all the more reason to get a persistent red bump on your dog’s paw checked out sooner rather than later.

The thinner fur on paws doesn’t provide the protective barrier that thick undercoats tend to offer.

White and light-haired dogs can burn easier than darker-coated pups.

Mast cell tumors (MCT) are another type of skin cancer with no apparent cause that we yet know of, although environmental irritants and hormonal factors may play a role.

Certain breeds are at a higher risk for certain types of skin cancers.

Breeds with thinner coats, lighter hair, or both, are more likely to develop melanomas as the result of sunburn.

Dogs older than eight years old are more likely to experience any type of skin cancer.

They can be brown, black, gray, or a combination of colors. It’s essential that any unusual bump on your dog gets checked out by a vet ASAP – regardless of the color.

When caught in the early stages:

Skin cancer can be removed surgically without any further treatment necessary.

Advances in veterinary medicine have made several options possible for dogs with cancer.

Aside from early diagnosis, preventive measures can help protect your dog.

If you live in regions with a high UV index, high altitudes, or generally spend a lot of time in the sun with your dog, consider dog-approved sunblock.

While it doesn’t do much to rub it into thick undercoats, the snout, tops of paws, and ears can benefit from dog sunscreen.

You can even use a t-shirt or rashguard on your dog to protect their torso.

You probably knew it before you ever read this article, but we’ll say it one more time: an unusual bump is worth letting the vet look at.

A red bump on top of a dog’s paw can be anything from a tumor to a wart.

It’s better to be sure that it’s not something that needs treatment from a vet.

Odds are, however, it’s something that you don’t need to worry about.