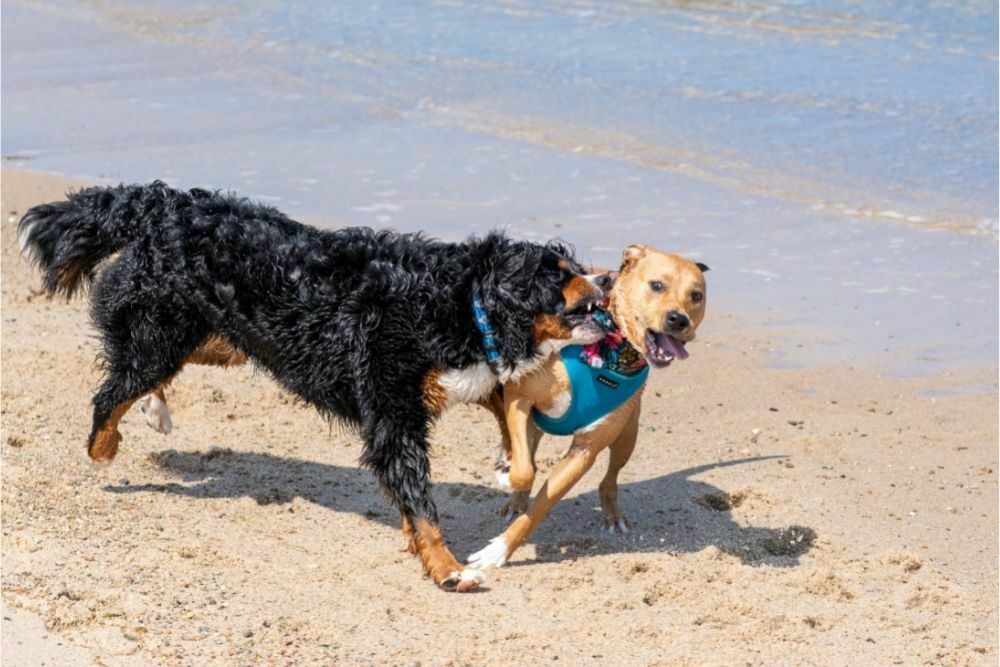 Contents hide
1 Is it normal for dogs to bite each other’s necks?
2 Neck Biting Behavior in Dogs
3 How to Stop Your Dog from Neck Biting

Dogs are known to play fight a lot, they start doing it as puppies and it’s a way of both socializing with other dogs and learning the boundaries of their own strengths and weaknesses, nothing to be worried about!

But what about when they start biting at each other’s necks? Aiming for the neck is usually considered a killing blow in the animal world, as that is where most predators will naturally attack.

After all, the neck is one of the most sensitive parts of the body, and if the biting gets slightly out of hand it can have some pretty serious consequences and cause harm.

As a general rule, neck biting in dogs is a completely normal occurrence, and it’s just another part of play fighting. It’s usually nothing to worry about, and the dogs will be sufficiently aware of the danger of going too far, and will therefore never use a lot of force when biting at the neck.

However, neck biting can also be a clear sign of aggression, whether it happens out or during play fighting. A dog that aggressively aims to bite another dog’s neck is clearly trying to go in for a final blow, and it’s something to watch out for before it gets too serious.

Basically, it can either mean nothing, or it can mean aggression, and the difference can be told by knowing your dog well enough to interpret the rest of the body signals and overall mood. But let’s look into neck biting, even more, to better understand this behavior!

Is it normal for dogs to bite each other’s necks?

Dogs biting at each other’s necks is a completely normal canine behavior, and it is most often absolutely nothing to worry about.

There are two main reasons for neck biting in dogs: play fighting and aggression.
If it’s the first, then it’s safe and normal behavior, and it’s a sign of the dogs getting along and being comfortable together.

However, if it’s the second, then neck biting can become a dangerous behavior that needs to be stopped as soon as possible. Aggressive neck biting means the dog is essentially wanting to harm or even kill the other dog, and so it is something to watch out for early on.

Let’s look at both causes for neck biting in more detail:

Play Fighting in dogs is completely normal, and an essential part of their development. A dog that play fights with other dogs is a dog that will mature and learn social skills, learning the boundaries of aggression along what is and isn’t appropriate.

They will learn to use their strength in a safe way, and it also helps them become more aware of their own abilities, plus the more a dog socializes with other dogs, the friendlier and easier to train the dog will be!

So basically, neck biting during playtime is healthy behavior, and it can teach your dog to socialize in a safe manner.

Usually, it’s pretty easy to tell when dogs are simply play fighting because they will both visibly be enjoying the interaction, and they will likely be bouncing around and chasing each other. If both dogs are leaning into the neck biting, and there’s no audible or visible distress, then everything is fine!

If the neck biting between two dogs is caused by aggression, then it’s not good and needs to be stopped as soon as possible. Neck biting in an aggressive manner can very quickly lead to the dogs suffering from serious harm, and it means the dogs are no longer interacting in a safe or playful manner, but rather in a death-threatening way full of animosity and discomfort.

But what is the cause of aggressive neck biting? How can you see it coming to stop it in time? And more importantly, how do you stop it if it starts to happen? Many dog owners have become injured themselves when trying to stop two aggressive dogs from hurting each other, so it’s very important to take the right steps and keep yourself safe as you deescalate the situation.

Let’s go through the answers to all of these questions: 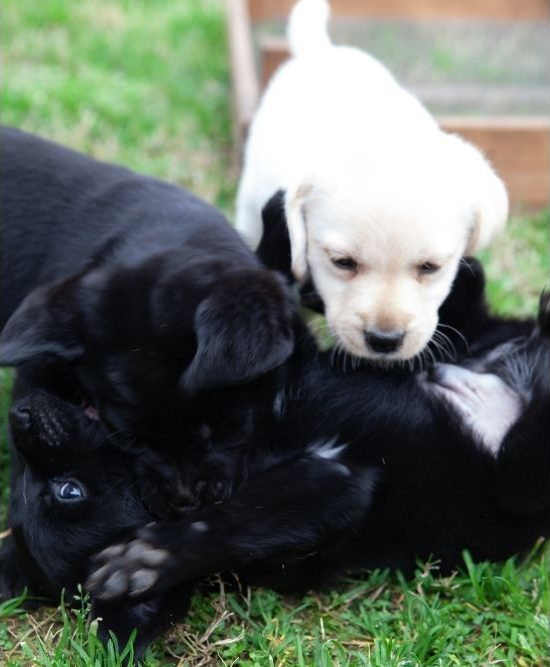 What is the cause of aggressive neck biting?

Aggressive neck biting can stem from many different reasons, and it’s usually down to the overall behavior of your dog in certain situations that might trigger it. Here are some of the main causes:

In a similar way to how excessive or uncontrollable laughing can turn to tears in humans, some dogs that get overwhelmingly excited can switch to aggression as a way to try and regain control over their feelings.

You can usually see this coming, as your dog will start to become uncontrollably hyperactive, and might then switch to aggression. So to prevent this, make sure you preemptively deescalate the situation.

If a dog is scared, the defense mechanism will quick in and this is usually showcased as a form of aggression. A dog that is scared or fearful will lash out. Make sure your dog feels confident and comfortable when interacting with other dogs to prevent this.

If a dog gets hurt during play fighting, which can sometimes happen, the neck biting might become aggressive as a way to indicate the pain and as a form of counterattack. It could also be ongoing pain or discomfort which causes the aggression, so make sure your dog is feeling okay!

Dogs can be incredibly territorial and protective of their home and their humans, so when another dog invades this space or gets too close to the dog owner, a dog might react aggressively.

This is why it’s so important to teach your dogs, from a very young age, that you’re in charge of who approaches you and your home, and that they have to be comfortable with sharing their space with whomever you invite in, including other dogs.

Some dog breeds were originally bred as working dogs in hunting outings, to retrieve or chase after prey. This means that they will naturally have a higher prey drive, so if they are in a situation that could end up becoming aggressive, with a clear prey vs predator role, their instinct could kick in and their neck biting could turn aggressive.

To prevent this be aware of the natural tendencies of your dog, and place preemptive measures early on to correct this behavior.

Usually, there will be a few warning signs that indicate that a dog is about to turn aggressive, so if you keep an eye out and learn to identify these signs you might be able to prevent the dangerous neck biting before it even begins.

Some of the main warning signs are:

There’s plenty of noises, including growling, when dogs are play fighting. However, if the growling becomes louder or lower-pitched, and is paired with other body language signs, it might be a warning sign for aggression.

Showing your fangs is almost always acknowledged as a sign of aggression or imminent attack, and the same goes for dogs! If they are showing their teeth and gums, it could be they are about to switch into aggression.

Having their ears flat against their head and staring intently at the other dog’s eyes are both clear signs of aggressive behavior and an invitation to fight, so this is a very clear warning sign to watch out for.

If your dog accidentally gets hurt during the play fighting, chances are it will be followed by some aggression, as a form of self-defense or to indicate that the boundary has been crossed.

How to break up aggressive neck biting:

If your dog begins to neck aggressively, and it develops into a fight, then you’re going to have to break it up before either dog becomes seriously hurt. However, you can’t just go up to your dog and try to separate them by grabbing them from the front or above, or by standing between them, because chances are you will end up getting hurt. Keep in mind that the dogs will be in a frenzy.

Instead, you can try to pull your dog away by grabbing the back legs and dragging away, or by throwing a jacket or blanket over the dog before trying to grab him. You can also try to distract the dogs from each other, or ask for help!

If you want to make sure that neck biting behavior is completely under control when it comes to your dog, then it’s important that you allow your dog to have plenty of healthy and safe interactions with other canines, so that neck biting is developed as a form of play fighting, always in a comfortable and safe environment.

The more your dog interacts with other dogs, the more it will be able to understand where the limits of aggression are, and what is or isn’t acceptable. It will also help your dog be more aware of its own limitations and strength abilities so that it can better control itself and avoid accidentally hurting another dog, which could then lead to aggression.

Other behavioral issues also come into play, so teaching your dog to not be territorial or possessive when other dogs around is key to preventing aggressive neck biting tendencies.

Basically, regular training and healthy interactions are what will keep your dog comfortable and confident, and less prone to neck biting aggressively when interacting with other animals!

How to Stop Your Dog from Neck Biting

If your dog already has a big tendency towards aggressive neck biting, and it has become a regular behavioral issue, you need to put a stop to it by completely addressing the root causes.

For starters, you should take your dog to your vet for a full check-up. This is because it is very common for aggressive behavior to be linked to an underlying health condition or injury, as the dog will be acting out from pain or discomfort.

It could also be from other issues such as anxiety or other psychological issues, which a vet will better be able to identify and treat.

But also, to stop your dog from neck biting you have to use regular training. Set boundaries and good habits down, and make sure your dog learns to interact safely. For this you will need a lot of patience, taking it slow, and upping the challenge bit by bit until your dog learns to neck bite only for playing, and never for aggression.