Getting a new pet may be a stressful experience, and you may be wondering what sort of behavior to expect, and what kind of behavior is not normal.

Contents show
1 Should Baby Turtles Sleep A Lot?
2 How Much Sleep Is Too Much?
3 Turtles In Captivity
4 Why Is My Baby Turtle Sleeping So Much?
4.1 Their Tank Is The Wrong Temperature
4.2 Something In Their Environment Is Making Them Sick
4.3 Other Reasons Your Turtle May Be Sleeping A Lot
5 When Is The Right Time For Turtles To Sleep?
6 How Do Turtles Sleep?
7 Does A Change In Season Influence A Turtles Sleep?
8 Summary

This is especially true for young animals maintained as pets, such as turtles, who are particularly vulnerable to becoming stressed if something is not right.

The first few weeks of having a baby turtle as a pet may be difficult since the turtle will spend a significant amount of time sleeping. So, what exactly is it that causes newborn turtles to sleep for so long? And is their sleeping a problem?

Here is everything you should know about the sleep cycle of a baby turtle. Learning about this will help you to understand the health of your new pet, and also give you an idea of if something is wrong with the turtle. 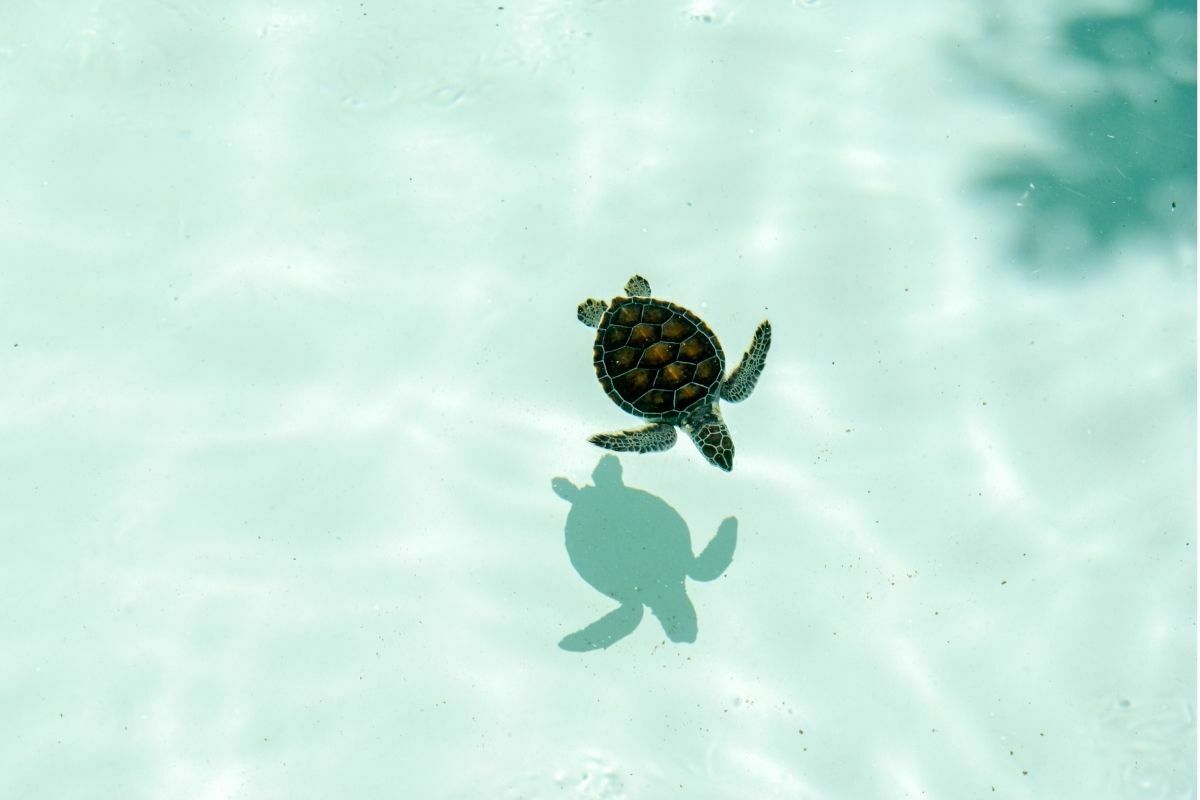 Should Baby Turtles Sleep A Lot?

If you notice that your new baby turtle is spending a large amount of time snoozing throughout the day, it is a cause for concern.

There are several reasons why your turtle may be oversleeping, and it could be a sign that your turtle is not getting the right things that it needs to be healthy.

In this case, the tank’s temperature may be wrong (either too high or too low), or the UV light is insufficient. As a result, the baby turtle is probably in poor health as it is not getting everything that it needs to grow and be healthy.

Turtles, no matter what small species you have as a pet, are far more active during the day. When it comes to nighttime, the animals usually sleep through the night.

The turtle sleeping through the night should not concern you as this is their natural sleep cycle, you only need to be worried if it sleeps a lot during the day.

The fact that your baby turtle is sleeping for long periods might indicate that something is wrong with their tank setup or with their overall health and well-being.

How Much Sleep Is Too Much?

Turtle sleep patterns have received little attention from researchers, which is regrettable considering the significance of the issue.

Also, the turtles used in the study were wild rather than ones that had been raised in captivity for scientific purposes, which is an important distinction.

According to one study report, red-eared slider turtles are active throughout the year, including throughout each of the four different seasons.

From the hours of seven o’clock in the morning to nine o’clock at night, these turtles seem to be very active.

Of course, if you have this turtle as a pet, it will probably not follow these exact timings down to the hour. Instead, you can use this to see that red-eared turtles are most active during the day.

According to the findings of this study, turtles were active for around 72 percent of the day and only for approximately 20 percent of the night, with the majority of their activity occurring during the day.

Based on these small studies, we can guess that a baby turtle will sleep for around ten hours a night and that napping for a short period of time during the day is also considered common.

Furthermore, when it comes to temperature, the turtle’s owners should have specific regulations in place for their habitats to follow.

Therefore, as compared to wild turtles, captive turtles should have more consistent sleeping and waking patterns.

Why Is My Baby Turtle Sleeping So Much?

There are two very common reasons why your new baby turtle is spending most of the day sleeping. Luckily, both of these causes can be easily fixed to get your turtle back to its normal healthy self.

Their Tank Is The Wrong Temperature

Keep in mind that turtles in the wild will commonly hibernate over the winter months to ensure their continued survival.

If their tanks grow too cold, or if they are placed in an outdoor habitat during the winter months, their natural adaptations will compel them to hibernate.

Hibernation is not something that should worry you when it comes to your turtle, as their bodies are easily able to survive during this time.

What is worrying is if they begin to hibernate while they are sick, or if they have not eaten enough before they go into hibernation.

Aside from that, if you live in a hotter climate but keep your house so cold that your young turtle begins to believe it is the dead of winter, this might be a problem.

To avoid this happening, you must ensure that the temperature of their tanks is maintained at the right level at all times.

The temperature needs of different turtle species need to be kept in mind when you are setting up your turtle tank.

To keep common snapping turtles happy and healthy, the water temperature in their aquarium should be between 75°F – 80°F.

Red-eared sliders require a temperature of roughly 75°F to survive and grow.

To live happily, box turtles must be kept in a temperature range of 65°F – 80°F.

Do your research to find the perfect temperature range for your new baby turtle.

Something In Their Environment Is Making Them Sick

Turtles require a lot of UV light to survive and thrive, and this light comes from the sun in the wild. In captivity, you will have to provide your turtle with these essential UV rays in other ways.

In an ideal situation, a turtle tank will contain a basking area that is located beneath a UV light bulb that is sufficient for the turtle’s needs.

You must make certain that you use a UVB bulb rather than a UVA bulb, as the latter will not provide them with the correct light rays for their needs.

Besides dechlorinated water for swimming and drinking, turtles require nutritious and high-quality food as well as regular cleaning of their excrement by humans (which often requires a water change).

If you do not supply your turtle with these items, they may become unwell, which may lead them to sleep excessively.

Other Reasons Your Turtle May Be Sleeping A Lot

There are a few other reasons why your turtle may have an issue with oversleeping.

Firstly, because pet sellers do not always offer their turtles the right environment or care, they become unwell as a result of their poor conditions. As a result, people end up acquiring infected turtles from the market.

The second issue is that many new turtle owners are misinformed about how to properly care for their turtles, which is a major source of frustration for many professional turtle breeders.

Despite the misconception that they are low-maintenance pets, they require a substantial amount of upkeep and attention to be healthy.

This problem is not always caused by a lack of research into the proper care of baby turtles by the owners, however. Sometimes, it is the pet stores that give new owners the wrong advice and instructions.

Discussions regarding how pet firms misinform their customers about turtle care may be found on a variety of sites, including exotic pet forums and turtle discussion forums.

A combination of these things might be at play, and these factors can make a turtle very sick, causing them to sleep more.

Even if you get your turtle from what you think is a reputable breeder or source, you must always do your research about the species of turtle that you are getting.

You must be informed about all aspects of turtle care to make sure that you can look after your new pet correctly.

When Is The Right Time For Turtles To Sleep?

It is incorrect to think that turtles are nocturnal, as some people believe. In the same way, as people do, turtles are diurnal creatures in the sense that they sleep at night and are up and active during the day.

As a result, if you have heard that turtles are nocturnal and are concerned that your baby turtle is sleeping all night, be assured that this is very typical for them and is a sign that they are healthy and happy.

How Do Turtles Sleep?

Some turtles may routinely slumber in their basking spot during the day, but they will not commonly sleep there during the night.

Does A Change In Season Influence A Turtles Sleep?

Because they are cold-blooded animals, turtles have internal organ temperatures that are determined by the temperature of their surrounding environment.

In the temperate months, when the temperature is neither too hot nor too cold, turtles are likely to be active at all times of the day.

In very hot temperatures, turtles will be slightly more active in the morning when it is a bit colder, and then spend the rest of the day basking in the sunlight to get as much vitamin D as possible.

When temperatures drop in the winter, turtles become more active during the daytime hours. If the temperature becomes exceptionally cold during the winter months, the animals will be able to hibernate in the wild.

In captivity, on the other hand, you can regulate the temperature of their tank to prevent them from falling into a deep sleep.

To establish how much sleep is excessive for a newborn turtle it is best to rely on your instincts rather than follow a strict guide.

If your baby turtle sleeps excessively, or if they suddenly begin sleeping substantially more than they did when you first acquired them, this might indicate a problem with their health.

If this happens, you may need to make changes to their environment to make them more comfortable. If this does not change anything, it is best to get them checked at a vet.