Bearded dragons make excellent pets, whether you’re an adult or a child – they’re not too big and are generally quite docile. However, as you probably know, they are lizards, and lizards have venom glands. 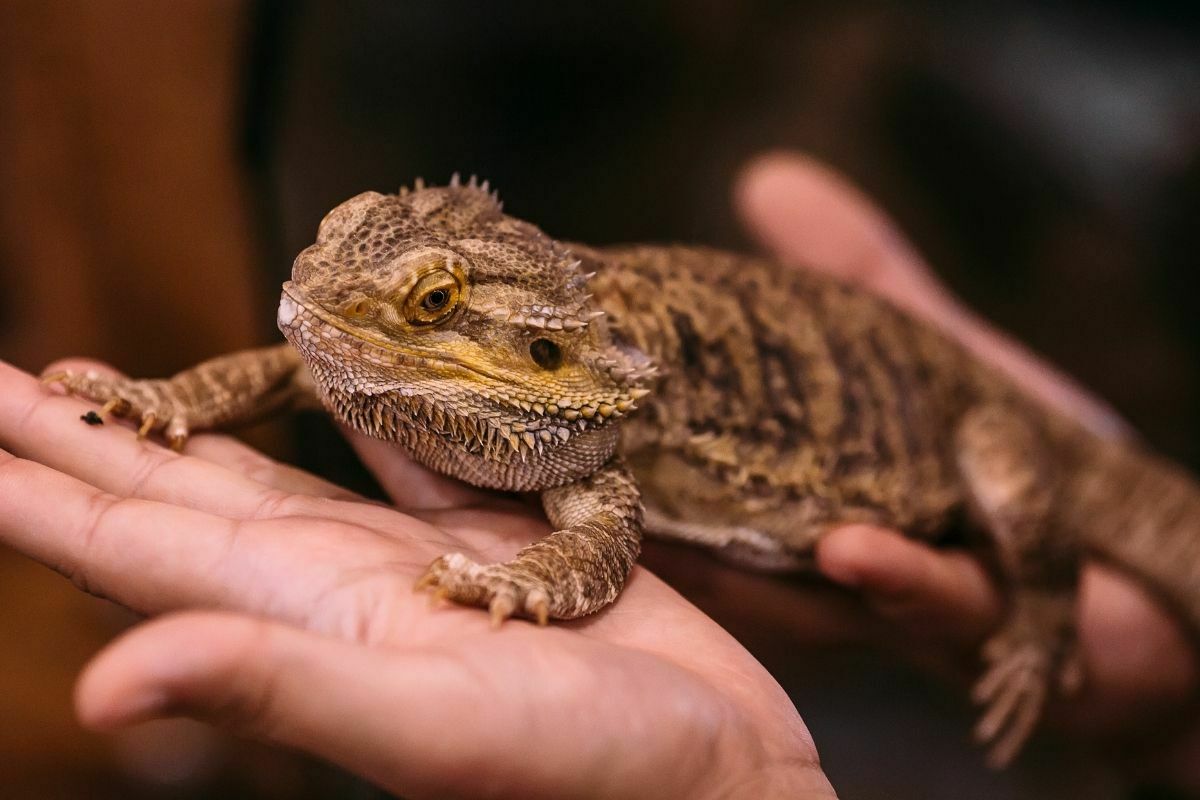 Does that mean, though, that bearded dragons are venomous? Read on to find out what the deal is with bearded dragon venom and their bite.

First off, what’s the difference between being poisonous and being venomous? They’re actually not the same thing, though some people aren’t aware of it.

The difference is that something poisonous is only dangerous if you eat it – it doesn’t have the ability to deliver the poison in its bite, sting, or anything like that. Deadly nightshade, for example, is a poisonous plant.

A venomous animal, on the other hand, is an animal that can deliver poison via a bite, sting, or some other way. There are plenty of these, including several different kinds of snakes and spiders, as well as many others.

Venomous animals are not necessarily poisonous to eat, although that doesn’t mean that they’ll be the first thing most people would choose to pack for a picnic.

Well, the short answer to that question is “yes”, but there’s quite a lot more to it than that.

For a long time, it was thought that bearded dragons were in fact not venomous. This is despite the fact that bites from bearded dragons can cause redness, swelling, and sometimes even excessive bleeding.

This was previously explained as a result of the bacteria that live in the dragons’ mouths.

However, in 2005, some Australian scientists made a remarkable discovery – bearded dragons (as well as various other lizards) do in fact produce a kind of venom.

As it turns out, both venomous lizards and snakes are descended from a single common ancestor that lived around 200 million years ago.

This means that it’s not much of a surprise that the venom produced by bearded dragons is somewhat similar to rattlesnake venom, although it’s not nearly as dangerous.

It’s not even enough to kill an animal as small as a mouse, although it will slow it down considerably. The venom isn’t even nearly powerful enough to cause any serious harm to a person, despite its relation to rattlesnake venom.

The worst you can expect from a bearded dragon’s bite is a bit of pain and swelling, which should go away fairly quickly. That said, their bite might cause more serious harm to small animals such as rodents.

Though bearded dragons do have venom glands, they’re usually considered vestigial. This means that although they’re still present, they no longer serve any function. They’re a relic of an earlier stage in the creature’s evolution.

Most bearded dragons only have one gland that produces venom, but one particular kind, the Eastern bearded dragon, actually has two.

This doesn’t make them any more dangerous, however – you have nothing more to fear from Eastern bearded dragons than you do from any other kind.

So, we’ve established that you don’t have much to fear from the bearded dragon’s venom – if you get bitten, you shouldn’t expect anything worse than some mild pain and swelling (unless you happen to be a small animal).

But what about the bite itself? How likely is it that you’ll get bitten in the first place?

Thankfully, it’s not very likely at all. As we mentioned earlier, bearded dragons are generally docile animals that rarely show signs of aggression toward humans.

The bite itself might be a little painful, as bearded dragons do have sharp teeth, but it should be significantly less so than getting bitten by something like a dog, owing to the dragon’s small size and less powerful jaw muscles.

That being said, the venom isn’t the only danger of the bearded dragon’s bite. They can also have salmonella bacteria in their mouths, so the bite, even though the venom isn’t anything to worry about, could still cause an infection.

This means that in the unlikely event that you do receive a bite from a bearded dragon, you need to be careful to clean the wound carefully.

For the same reason, it’s a good idea to wash your hands after you handle a bearded dragon in general if you want to avoid a nasty stomach infection.

If you do happen to get bitten, it’s important to know how to react. Your instincts might tell you to pull away as quickly as possible, but this isn’t the best idea, as it might just make the bite worse.

Instead, it’s better if you try to gently pry its jaws apart so that you can remove yourself from their grip. Be careful not to hurt the dragon as you do this.

As mentioned before, it’ll be a good idea to carefully wash the wound, if there is one. You should also consider getting a tetanus shot if you haven’t had one in the last five years.

What Can Cause A Bearded Dragon To Bite?

We’ve already said that bearded dragons are generally docile animals that rarely attack humans. They take well to being handled and petted and are generally calm.

In fact, even if they feel threatened by a human, they’re usually more likely to run away and hide than to turn to aggression. So, why might they bite? There are a few reasons, which we’ll go over here.

It’s not common, but if you handle your dragon roughly, it’s possible that they’ll react to this perceived threat by biting you.

While, as we said earlier, they don’t usually mind being handled, they’re not exactly cuddly animals like cats or dogs. Take extra care when handling them to make sure they feel comfortable.

Don’t hold or squeeze them too tightly, or in any other way that could hurt them or make them feel uncomfortable.

If your dragon is sitting calmly and then you startle it somehow, it might respond with a bite. In particular, you should avoid any sudden movements above their heads, as they’re most likely to respond aggressively to this kind of thing.

This can also happen if you try to pick it up too quickly. If you want to pick it up, it’s best to do it slowly and from behind.

Not all bites are intentional. If you’re feeding your dragon, for example, it might bite your finger by accident, or confuse it with food.

How To Notice That A Bearded Dragon Might Get Aggressive 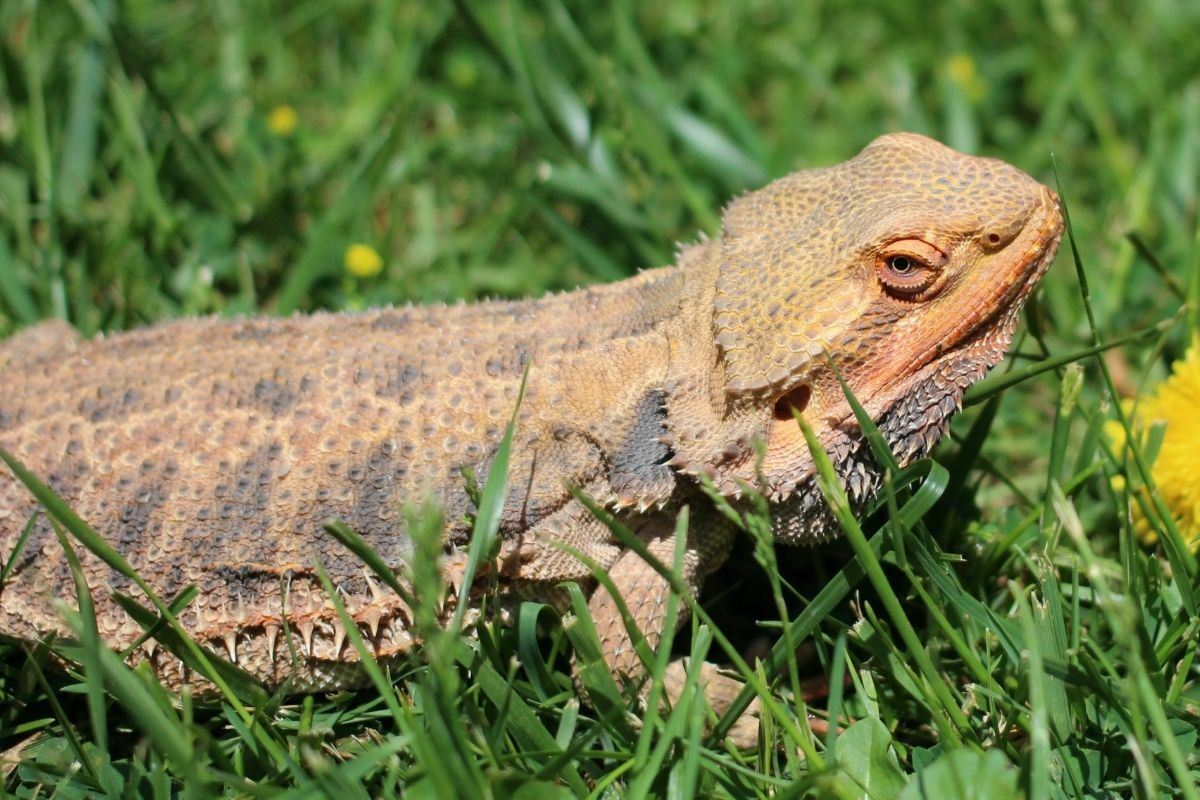 There are a few warning signs that you might be able to look out for to make sure you’re not taken aback by an angry bearded dragon. The first is if it starts hissing sounds – plenty of animals use this to indicate aggression, and the bearded dragon is one of them.

If you notice that it’s fluffed up its beard, that’s another symbol, since, in the wild, it does this to present a warning to threats. Another sign might be that its skin color has changed.

If you notice any of these signs, the best thing to do is put the dragon down (preferably in its terrarium) and don’t pick it up again until it’s had time to calm down. If it tries to move away from you, let it unless it’ll be putting itself in danger.

So, in summary, bearded dragons actually are venomous animals, although this was only discovered in 2005 – prior to this, they were thought not to be venomous at all.

There’s no cause for alarm, though – the venom is very weak, and doesn’t present any serious danger to a person. The worst you can expect from the venom is mild pain and some swelling that will quickly go away.

However, you should still wash any wound carefully, as there is still a chance of a bacterial infection otherwise.