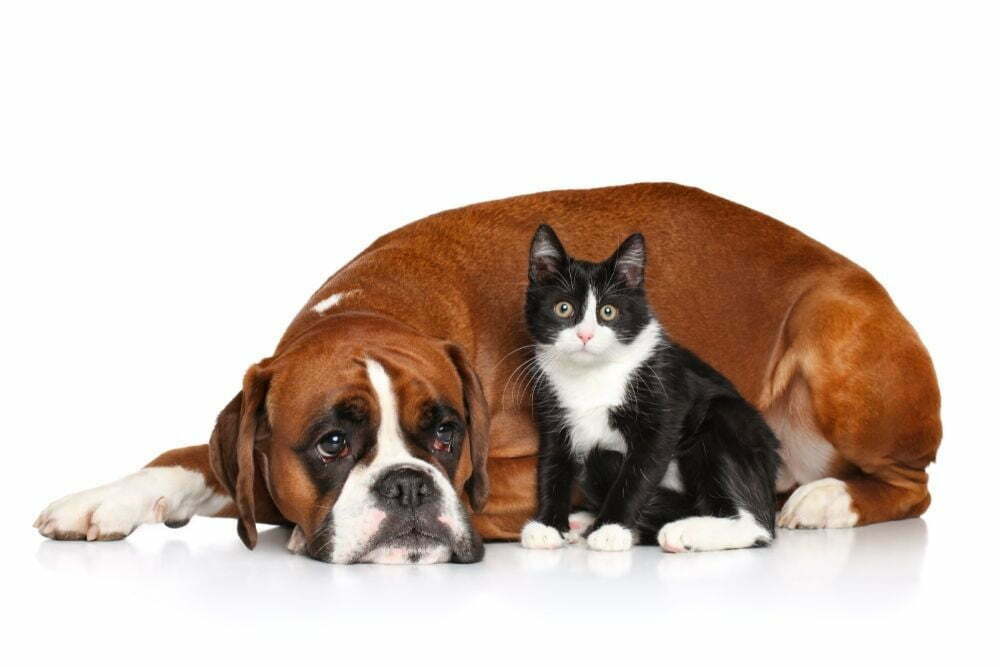 Contents hide
1 What Is Parvovirus?
2 How Cats Get Parvo From Dogs
3 How The Research Works
4 Feline Panleukopenia vs Canine Parvovirus
5 How To Stop Cats From Catching Canine Parvo
6 Can Dogs Catch Parvo From Cats?
7 How Parvo Is Spread
8 How Do I Know If My Cat/Dog Has Parvo?
9 How To Prevent Parvo in Cats and Dogs
10 How Parvo is Treated
11 Conclusion

Parvovirus, or parvo, is a highly contagious disease with a high fatality rate in untreated dogs. There are feline parvovirus strains that are similar to canine parvo, but can cats get canine parvo from dogs?

You might be treating your dog with parvovirus and you’re worried your cat might catch it too. You might just be anxious that your dog could pick something up and spread the virus to your feline friend.

The short answer is: yes, cats can get parvo from dogs. It is uncommon and unlikely, but it can still happen.

Canine parvovirus is a highly contagious virus that attacks the cells in a dog’s intestines so they aren’t able to absorb nutrients. This leads to weakness, dehydration, and in 91% of untreated cases, fatality.

This virus spreads through bodily fluids such as urine, feces, and vomit. It works similarly to human viruses as it can stick to surfaces, even outdoor ones, for up to 6 months. Whilst there currently aren’t drugs to cure parvo, there are vital vaccinations that puppies should receive.

How Cats Get Parvo From Dogs

The most common strain of feline parvovirus is feline panleukopenia (FPV), which was always assumed to be the cat version of the canine parvovirus. However, as research has continued and more strains of the virus have developed, scientists have found that cats can catch the same canine parvo from dogs.

It’s still taking a while for cat owners to believe that there is a small chance of cats catching parvo from dogs. Inter-species contagion of parvovirus is rare because of the number of different parvo strains, but that doesn’t mean it still can’t happen.

Initially, scientists thought that cat cells can only catch strains of canine parvovirus in a laboratory, and not in the real world. However, in the last decade, researchers have found that canine parvovirus and feline panleukopenia are very similar. This is because the canine parvovirus has mutated enough to latch onto feline hosts.

Interestingly, cats who have canine parvovirus are often asymptomatic. This means that infected cats might unknowingly be spreading the virus, which means dogs are more likely to catch it, too.

How The Research Works

Research is conducted by testing the fecal samples of cats and dogs in shelters and laboratories. It is done in a confined and protected area to prevent the risk of viral infection in the real world.

One study took 180 fecal samples from cats in a mixed shelter of both cats and dogs. From these samples, 61 of the samples came back positive for canine parvovirus. The research proved that the virus was “isolated in cell cultures” in both host species, meaning that they had contracted the same virus.

As the likelihood of cats catching parvo from dogs is so rare, there’s not much research out there. However, as the spread of the virus can still happen between both species, it’s always worth being cautious of.

To give you an idea of how similar these viruses are, scientists have proven in research that feline panleukopenia and canine parvovirus only differ in their DNA sequences by 0.5%.

The only real difference between both viruses is the way they affect their respective hosts. Canine parvo works to attack the cells in the intestines to stop the dog from absorbing its vital nutrients.

Feline panleukopenia attacks the blood cells in the body (mostly the bone marrow, intestinal tract, and skin) which makes the animal anemic and open to bacteria and other viruses.

How To Stop Cats From Catching Canine Parvo

The best way to prevent a dog from catching parvovirus is to vaccinate them when they are puppies, but what about cats?

If you suspect your dog has caught parvovirus (or if they have tested positive without vaccination), you must keep it separate from your cat. The same goes for shelters that hold both cats and dogs, as the virus is airborne amongst puppies who are yet to be vaccinated.

Canine parvovirus is mostly spread through consuming bodily fluids, so cats should not eat dog feces or vomit, or vice versa.

Can Dogs Catch Parvo From Cats?

So, we have established that, whilst uncommon, cats can catch parvovirus from dogs. However, research has concluded that cats cannot catch feline panleukopenia.

Despite this, many different parvovirus strains could mean that inter-species contagion is possible. As the majority of parvoviruses are transmitted through bodily fluids such as vomit and feces, it is recommended to keep dogs and cats away from each other’s matter to prevent the spread of any virus.

As cats are mostly asymptomatic to canine parvovirus, dog owners need to make sure that their dog is vaccinated against parvo and does not come into close contact with cat feces or vomit.

How Parvo Is Spread

Dogs and cats alike both catch parvovirus from the bodily fluids of an infected dog. This includes urine, feces, and vomit. Whilst everyone should pick up the poop after their dog on walks anyway, this doesn’t mean that the area is parvovirus-free. Parvovirus can linger on the ground for up to 6 months, even from the residue of the feces you have picked up.

We all know how foul dogs and cats are when it comes to their bizarre obsession with smelling, licking, and eating poop. God knows why they do it, but each to their own. However, there is no way of telling that the poop your dog is sniffing/licking/eating has come from a dog who has been vaccinated against parvo.

Due to the hardiness of the virus, any unvaccinated dog can be exposed to it on any surface – including a kennel, in the park, on the sidewalk, in the groomer’s, or a home.

As cats can be carriers of canine parvovirus, it’s also important to keep dogs away from cat feces. There is currently little evidence to say that other animals, such as badgers or foxes, can also be carriers of parvovirus. Just to be safe, it’s best to stop your dog or cat from eating feces that could hold a matter of bacteria and viruses.

Cats, likewise, might contract parvovirus from dog feces. You should probably try to prevent your cat from eating any type of poop anyway as most viral infections are spread in this way, but as cats tend to wander around neighborhoods out of the owner’s eyesight, there’s no way of telling if they have eaten poop from a positive parvo dog.

How Do I Know If My Cat/Dog Has Parvo?

While some cats who catch canine parvovirus will be asymptomatic, that doesn’t mean they won’t show a few of the same symptoms as dogs with parvo.

The virus can take up to a week for symptoms to show, so half of the time, you never actually know if your dog or cat has it immediately. This is why vaccinations are so important.

The common signs of canine parvovirus in both dogs and cats include:

It can be difficult to tell the signs of parvo or feline panleukopenia in cats due to their lazy nature. Cats aren’t as energetic as dogs, as they would much rather lounge about on the couch and meow for the occasional scratch.

Dogs, however, are usually much easier to read as their personalities are much more extroverted, meaning you can tell when a dog is not well.

How To Prevent Parvo in Cats and Dogs

Dogs must be vaccinated at a young age for them to be protected from catching parvovirus. As there is no current cure for parvovirus in an unvaccinated dog, the vaccination is essential for prevention. The vaccination doesn’t guarantee complete protection against the virus, but it will lessen the odds of them contracting it (or having the worst symptoms if they do catch it).

How Parvo is Treated

Whilst there is no drug to cure parvovirus, treatment plans are designed to strengthen the animal’s immune system. If your vaccinated dog catches parvo, they are likely to battle the virus away with their antibodies. However, unvaccinated dogs and puppies must need hospitalization.

It’s not clear whether cats with canine parvo will undergo the same treatment, but research has shown that the treatment plans are mostly similar.

At the vet’s, the animal will be put on a drip to provide fluids to their body. As dehydration is the main killer of parvo, the animal will also be given anti-sickness medication to prevent them from vomiting the fluids.

During their hospitalization, the dog will be isolated away from other animals and people. The vets will wear specific protective clothing to prevent the risk of infection to other animals in the practice.

In most cases, treated dogs have a 95% survival rate from parvo. They should stay in the vets for between 5 to 7 days until the virus is clear, after which they will then be offered the vaccination to prevent them from catching it again. However, untreated dogs and puppies with weak immune systems aren’t as lucky.

So, there you have it! Unfortunately, cats can get parvo from dogs. As there are so many strains of parvovirus amongst both species, the mutation of both canine parvovirus and feline panleukopenia have both acquired the same host.

However, to be clear, cats cannot catch feline panleukopenia. They might catch other strains of parvovirus and other viruses from cats, but this is unlikely.

Whilst it’s rare for a cat to get parvo from dogs, it’s still possible and worthy of concern. To avoid this, all dogs must be vaccinated against parvovirus and cats should be vaccinated from feline panleukopenia.