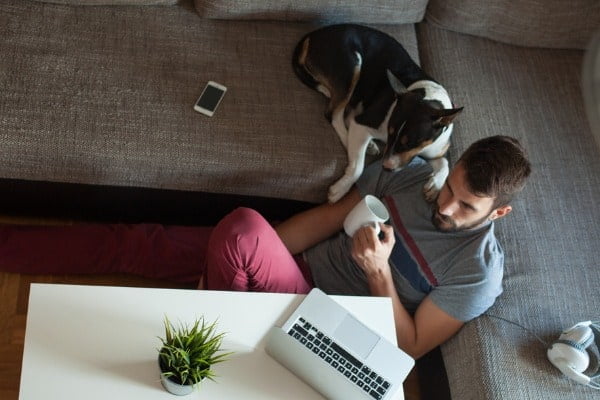 A lot of pet parents choose to share the furniture with their dogs.

It’s a mutually beneficial arrangement – especially when you factor in all of the quality cuddle time it allows.

The hair on the furniture and extra vacuuming is well worth it.

Dogs can have some interesting choices of where they sit on the furniture and the couch, however.

Sometimes, their beloved spot is confusing and also a little inconvenient, including when you find a dog standing on you as soon as you sit or lie down.

Does your dog like to settle in on the couch somewhere behind you?

A dog getting cozy on the couch by sitting at your back is a case where they are a little in the way.

Why do they do it?

There could be several reasons why your dog prefers to snuggle in behind you. Some are harmless, and some could indicate behavior issues that need a second look.

Let’s go through the reasons why your dog may be sitting from behind now.

When Your Dog Sits on the Back of the Couch 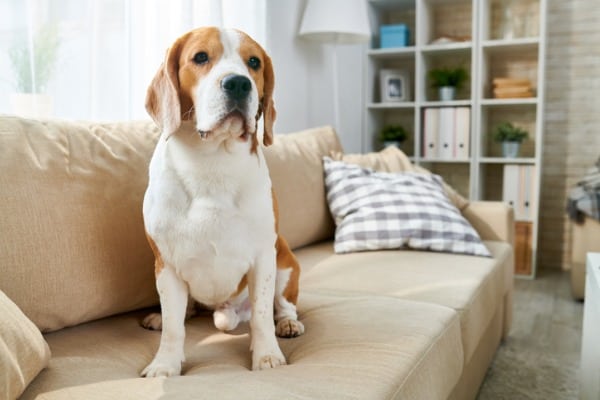 A lot of couch designs allow for ample space for a dog to make a bed on the back of the couch.

Little dogs, in particular, find favor with setting up in this ideal spot.

Why do they prefer sitting behind you on the back of the couch?

1. They’re Afraid of Getting Squished

You don’t have to be a large person to do serious damage to a tiny dog. Picture a Chihuahua or similarly-sized dog, and imagine what 150 lbs of weight would do to them.

Even less weight than that could harm them – small children still tower over small and medium-sized dogs.

Dogs are good at adapting to their environment, and as such, they’re pretty good at staying out of the way – especially when they’re tiny.

Think of the back of the couch as a perch for your dog.

They can stay out of the way while still being close to you and having a good vantage point for the rest of the room. Which brings us to the next reason your dog might enjoy the back of the couch for sitting purposes. 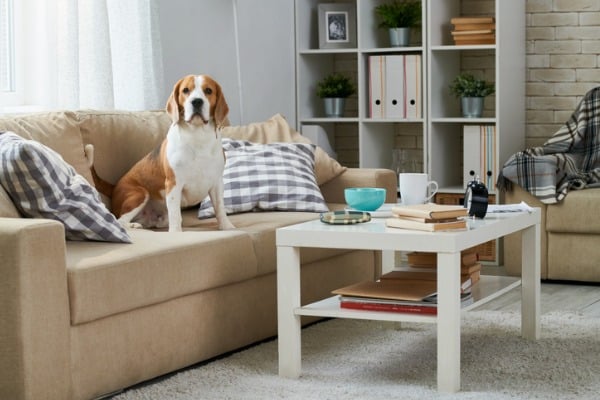 Having a good spot to monitor the room – and perhaps other areas of the house, depending on the layout – makes the back of the couch prime territory.

It’s even more of an attractive spot if it allows your dog to see out of a window.

Your dog might like to stand guard on the back of the couch, whether you’re sitting there or not.

When you are there, protective dogs have even more incentive to use the back of the couch as a lookout post.

You might want to be careful with letting a dog peek out the window from the back of the couch, however.

There are usually simple explanations for why dogs do what they do – especially regarding favored resting spots.

The back of the couch might be the best place for them to sit. If they get to be close to you, that’s already a big plus.

It could be softer, warmer, or more secure to them – especially if your dog can wedge themselves between the back of the couch and a wall.

When Your Dog Squishes Themselves Between You and the Couch

There’s another couch-sitting scenario here, and that’s when your dog tries to share the seating area with you.

This one can be annoying!

It’s not the perfect arrangement since you can’t lean back and get comfortable without putting weight on the dog.

Small dogs obviously can be harmed if you do this, and big dogs who can handle the weight don’t always put up with it for long.

What is it that makes your dog want to cram themselves between you and the couch? 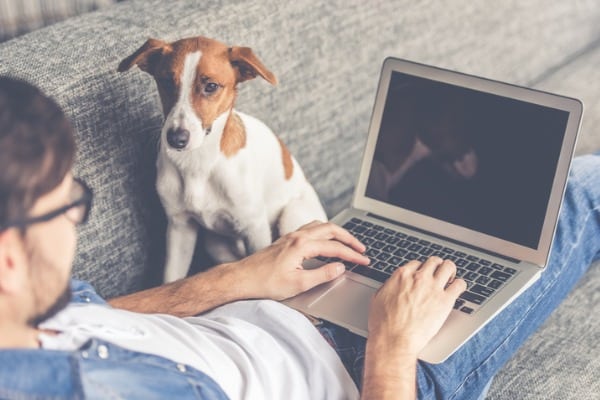 Dogs will often turn to their humans for soothing if they’re suddenly scared of something, stressed, or nervous.

Think of the environment:

You might notice your dog only likes to sit behind you on the couch when there’s something threatening like a thunderstorm, fireworks are being set off, or other things are occurring that upset them.

Not only does your dog feel safe being close to you, but the spot between you and the couch will also feel similar to burrowing and hiding from the thing that’s frightening them.

2. They Have Separation Anxiety

Does your dog become anxious to downright destructive when you leave?

If your dog tends to get upset when you’re gone, sitting behind you on the couch could be another manifestation of separation anxiety.

Dogs with this behavioral issue like to stay close to their humans, sometimes sitting on them, beside them, or behind them every waking moment.

They do it so they’ll know right away if you get up or head to the door.

Staying close means they can keep an eye, ear, and paw on you at all times.

3. They’re Trying to Have Your Back

Some dogs tend to be naturally more protective. Others might have experienced stress that makes them on alert all the time.

Sitting behind you on the couch is just one way a protective dog is trying to literally watch your back. 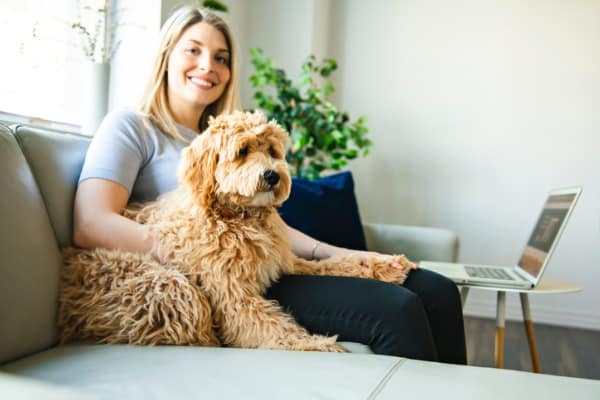 Sitting behind you and against the back of the couch is a cozy spot and one that’s sure to be toasty.

If your dog tries to stuff themselves behind you, take note of the weather. Chilly days and winter temperatures affect dogs, too.

Your dog could be sitting behind you to share body heat and only wants to warm up. They’ve simply discovered they get more warmth this way versus just sitting on you all the time.

When is it a Problem?

Your dog probably doesn’t want to sit behind you or on the back of the couch to assert dominance.

The theories behind dominant or assertive behavior in dogs have been debunked by now.

Can dogs still have issues with bossiness, invading personal space, and stubbornness?

Just don’t read too much into your dog wanting to sit near you, unless it comes along with the following behaviors.

Chasing Other Pets Away 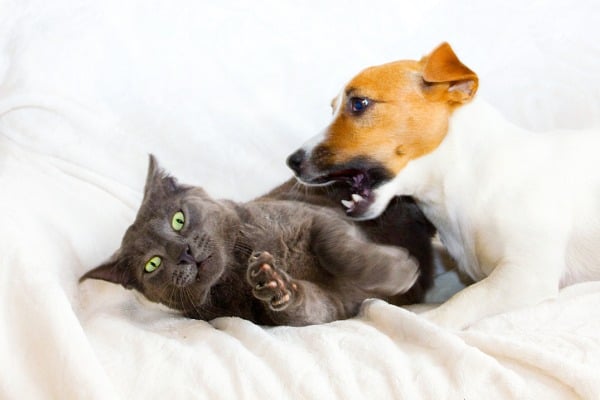 If you say yes to dogs on furniture, a dog sitting behind you is fine – as long as they don’t get the idea that they own you, or that spot.

Look for the warning signs:

It can start with dogs being mildly aggressive when others try to take their spot or move you away from them.

They’re not dominating you so much as they’re trying to “claim” you.

This can deteriorate into resource-guarding behavior, and in this case, they see you as the resource.

Watch out for your dog chasing other pets away, even if it appears to be in a playful manner. Yes, we’re talking mostly about cats and dogs getting along here!

If they start getting a little too greedy with their spot, it’s time to remind them that you have an ultimate say on who sits where.

You need to take action:

A dog who tries to claim a particular spot on the couch and is unwilling to share, unfortunately, has to be made to share.

A large part of the reason a spot behind you is so coveted is that it puts the dog close to you.

Removing them from your personal space teaches them that aggressive behavior gets them the opposite of what they want.

A time-out in a crate or behind a gate can help drive the message home that they will not be rewarded for being aggressive.

Becoming Aggressive with You

If you accidentally sit on your dog, expect a loud yip and maybe even a snap.

This doesn’t make your dog aggressive if they react this way in pain.

It’s a normal reaction that can happen to the best of dogs.

Are they guarding the couch?

However, if they growl, snarl, or snap when you pet them or simply try to sit down near them, they have developed a resource guarding issue.

In this case, the resource is the part of the couch you want to sit on.

It’s essential to train a dog out of this behavior as soon as you observe it since resource guarding can cause serious bites and fights with other dogs.

Whether the resource your dog is guarding is you or the couch, teaching them that it’s unacceptable and unnecessary is vital.

How can you do it?

You first have to show them that aggression comes with consequences – they will be barred from their spot for aggressive offenses.

Failing to act tells them that their aggression works, and they will continue to use it as a tactic.

It’s also crucial to show them that they don’t need to be aggressive with these things.

It’s okay for dogs to have their own beds and their own place to rest.

If another pet beats them to their favorite bed, however, make sure there’s an equally suitable alternative.

You can treat them sitting behind you in the same way. If it’s not something you want them to do, provide a place for them to rest that is also appealing.

They will be less likely to aggressively guard their ideal spot if they have a good second choice. 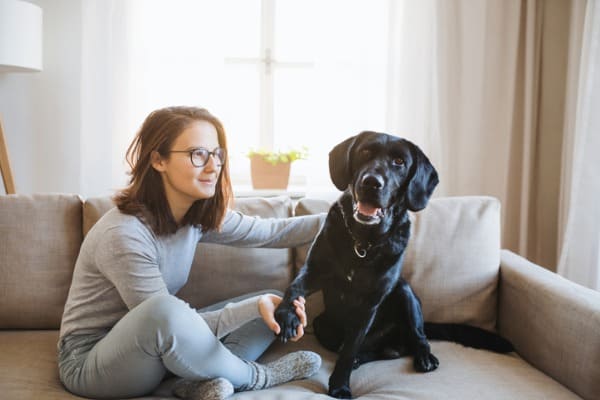 It can be a wonderful joy in life to share a couch with your dog.

Sharing your home with your dog in general, as well as cuddling on the couch, is even good for your health.

Is a dog sitting from behind sometimes an awkward, uncomfortable arrangement?

Especially if you have a couch-hog on your hands.

Is it something to worry about?

Not unless your dog has severe anxiety issues or shows aggression.

They likely want to be close to you and have a comfy spot to sit at the same time.