Why Does My Dog Stand on Me? Important Things to Know

The creatures we share our homes with certainly have some interesting quirks.

Whether you are a new puppy parent or have had dogs in your life for years, some of their behaviors can seem puzzling.

The problem can be communication:

When we can’t verbally engage with our dogs, getting to the root of some odd habits is difficult.

However, there are ways to understand your dog in the absence of a shared spoken language.

Dogs speak to us through their behaviors, such as a wagging tail to display excitement, or flopping on their backs to show relaxation. Putting their tail between their legs to tell us something is wrong.

So what does it mean if your dog is standing on you, or over you?

When you find yourself noticing, my dog likes to stand on me, it’s natural to wonder why.

Without being able to ask our dogs outright, it’s not always possible to understand their motives.

All is not lost:

Thanks to our understanding of the canine species, and dog behaviorists, it is possible to narrow down some reasons your dog is standing on you.

For quite some time, it was accepted dogs followed a hierarchy structure similar to their cousin, the wolf.

It’s easy to see why back in the day, vets and behaviorists prescribed to this theory. 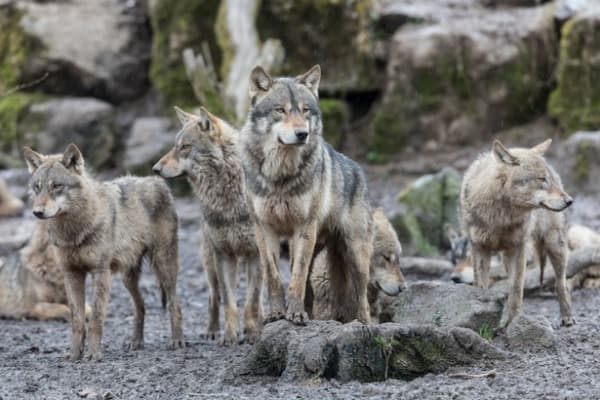 Dogs are indeed closely related to wolves and share characteristics, both physical and psychological.

It was after more was discovered about the complex social structures of wolves that the experts began to realize that comparing wolves to domesticated dogs is like comparing apples to oranges.

We had an impact:

The very fact that our dogs come from a long line of canines that evolved alongside humans impact their behavioral tendencies on the evolutionary level.

Domestic canines deviated from wolves not only in their appearance but their psychology as well.

What does this have to do with your dog standing on you?

Outdated training guides might suggest a dog standing on you is a sign they’re trying to assert dominance or establish themselves at the “alpha” of the pack.

This misunderstanding of dog behavior also leads to overly aggressive training techniques such as corporal punishment or flipping a disobedient dog on their back.

The dynamic between people and domestic dogs are vastly different than that of a wolf pack.

It is now widely accepted that domestic dogs don’t have such a specific idea of dominance, hierarchy, or who is the “boss” in the house.

The answer is probably more straightforward and much more benign.

Does that mean you should let your dog stand on you?

That is entirely up to the individual pet parent.

Just because your dog isn’t trying to dominate you by standing on or over you, doesn’t mean it’s ideal behavior.

Drooly dogs, large breeds, or dogs with little understanding of personal space can make that hovering behavior a little annoying.

So, just because your dog isn’t doing anything to irritate you or assert themselves purposely, you can still set rules.

Little dogs might be more inclined to do this for a few reasons. 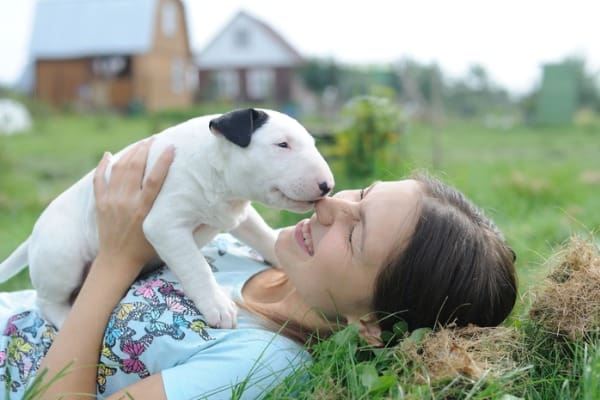 They’re smaller and more likely to get away with it without crushing your ribs.

Smaller breeds also can become pushy or spoiled if they’re not given boundaries.

They might be clingy to a certain person and want to be close to them or ON them at all times.

There’s a big difference between pushy and asserting dominance, though.

Small dogs who can’t take the hint about standing on you have likely not been taught otherwise – it doesn’t mean they’re attempting a coup within the household rankings.

We get it – a tiny dog standing on your chest is pretty adorable.

If you’re over it, however, remember that basic rules keep the harmony in the house.

If you’re worrying, why does my dog stand over me, you can rest easy.

They’re not planning a mutiny.

Don’t be afraid to remind them you need your space sometimes.

Dogs Just Want to be Close

Dogs are very social animals and tend to form very intense bonds with the people they love.

It might seem obvious why they want to be near you, but there are some unexpected reasons that fuel the behavior. 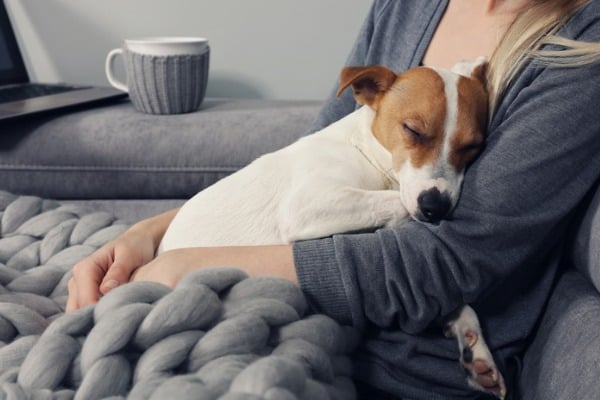 Some breeds tend to be more cuddly than others, but when it comes down to it, each individual dog is different.

Cuddlers might like standing on or over you because they’re trying to figure out a good sleeping arrangement – or they’re waiting to see if you’re actually settling in for a while.

The options are endless:

Dogs cuddle when they’re cold, lonely, or simply because they enjoy your company.

Even though they’re not exactly comparable to wolves in their behavior mannerisms, they are similarly social animals at the core.

Dogs will almost always choose a companion if one is available, whether it’s for a walk, playing, or sleeping.

Consider it a compliment when your dog standing over is the precursor to them getting cozy in your company.

Dogs might hover or stand on you when you’re sick or sad, as well.

Hovering behavior can be a result of them picking up on cues that you’re not feeling quite yourself.

It could be chemical changes in your brain and body, or tiny physiological changes – increased heart rate, higher temperature, raised blood pressure.

Some dogs might know a woman is pregnant even before the woman knows herself.

It’s a mystery in some ways:

We’re still not 100% sure how dogs can sniff out when we’re feeling bad or something is different, but whatever they’re picking up on, it can make them extra alert or even stressed.

An anxious dog can become a clingy dog very fast.

A dog with anxiety might be pacing and won’t lie down. Add in a clingy personality and a dog can hover or stand on you because they’re looking out for you. 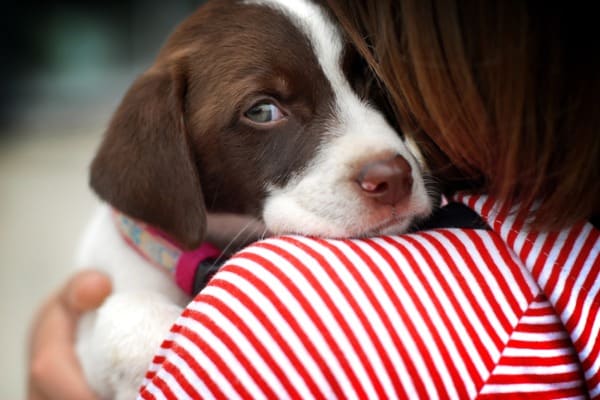 What else can make a dog anxious and clingy?

They’re not feeling their best selves.

Many things can cause dogs to feel under the weather, from canine colds to separation anxiety.

If they’re recovering from an illness or injury, they might be extra needy when it comes to cuddles.

Affection and connection is often good for any kind of dog health problem.

Honestly, who can blame them?

Other causes of stress can be new environments, travel, loud noises, grief, or even depression.

A dog who has experienced these things or something similarly upsetting might stand on you because it makes them feel safer and calmer.

In more extreme cases you might find your dog sitting behind you if you sit down.

If you’re willing to be the emotional support human for your dog through their tough time, they’ll benefit from being close to you.

Dogs who are climbing you or bouncing between you and the walls is probably wanting to play.

We can’t exactly roughhouse with them the way another dog would. All those teeth are deterrent enough, even if it is just playing.

When your dog is standing on your or trying to egg you into a wrestling match, it makes much more sense to get out their favorite rope tug toy or the ball.

Dogs Standing on People: Is it Ever a Problem?

Have you ever had this thought: my dog stands on me (or even sits on my all the time) and scares away others?

They usually have a basic understanding of who is in charge and no desire to change that arrangement.

Dogs can become possessive of people.

They might not necessarily think they’re the boss, but they can think that they need to guard you.

They can attempt to be your guard dog without trying to become an alpha male – it’s just a matter of them protecting something they feel belongs to them.

Dominating them or hitting them won’t do anything to take them down a notch – they weren’t trying to become the boss in the first place.

That being said, a dog who stands on you and shows aggression to other dogs or people who come close is a dog who needs to be corrected.

We’re still not suggesting “putting them in their place.”

Because a dog doesn’t understand punishment as well as they can understand being corrected or redirected.

Pay close attention to a dog who becomes aggressive while they’re standing on or over you, and pay attention to the situation as well.

If the dog or person they’re growling, snarling, or barking at initiated the exchange, then it can do more harm than good to redirect your dog.

A dog is standing over her human.

Another human with a bad habit of teasing dogs made threatening movements towards them both.

The dog growls as if suddenly scared of something in the situation.

This is an exact scenario we’ve had personal experience with, and our advice is to remove the dog from the situation entirely.

Why didn’t we scold the dog?

The dog could not have possibly known the aggressive gesture was only teasing.

Also, because the dog was so close to her human, she could not have differentiated if the aggression was directed at herself or her “mom.”

In this situation, the teasing human was the one who was scolded for their behavior.

The dog was rightfully protecting her human from a threat.

Even if it was obviously teasing to the people, it is unfair to expect a dog to understand the difference.

Let’s face it, in the event of an emergency, we all hope our dog will have our back.

What if your dog stands over you and growls at others for no reason?

A dog who becomes aggressive when another pet or family member comes to close or tries to move them should be conditioned not to – before someone gets bitten.

The best way to train a dog out of this type of behavior is to make them get off of you immediately – stand up and separate them from you by a door, gate, or crate.

If you allow a dog to “scare” others off, it only teaches them that their behavior works.

A dog that does this clearly wants to be near you above all else.

Taking that “reward” away will help show them that this behavior does not get them what they want.

These short time-outs go a long way in correcting this behavior. 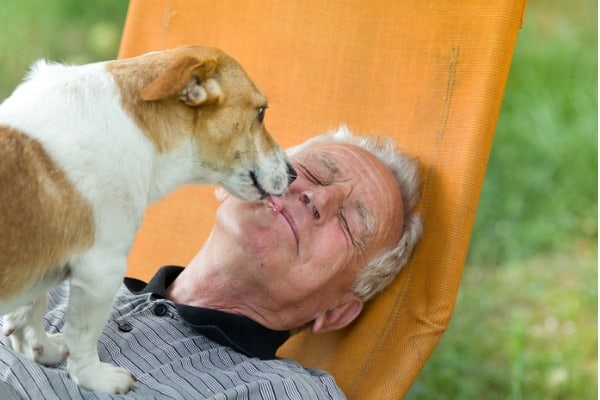 Why does my dog stand on my chest?

It’s not as big of a deal as the old-school training books will make you think. Your dog is more than likely not trying to pull rank on you, either.

The only time to be concerned about it is if your dog is displaying extremely stressed or aggressive behaviors while they stand on you.

Otherwise, chalk it up to them needing a little comfort – or them doing the comforting when you need it.

Why Does My Dog Growl When Being Pet?

Why Does My Dog Sleep on Me and Not My Husband?

Can CBD Help Manage Skin Conditions in Dogs and Cats?

What Type of CBD Is Best for Your Pet?

How to Become a Dog Breeder: What You Should Know First

Blue Heeler Poodle Mix: Get to Know This Lovable Breed

Blue Heeler Mix: Get to Know Them and Pick the Best One for…