Bacon is something that is found in the majority of households, and it smells amazing, tastes like perfection, and has a taste that many people love. All of these things are sure to make your dog’s mouth water.

However, is it alright to give your dog raw bacon? Maybe not. We will tell you everything you need to know about feeding dogs bacon in this article.

No, your dog should not be eating raw bacon. Even though raw bacon is technically safe for them to eat, it is very likely to make them sick. Just like any other raw pork product, there is a small chance that there are parasites or bacteria on the meat that could make your dog unwell.

Although, if they were to eat a tiny bit that you accidentally dropped on the floor, then they would probably be fine.

There is no right or wrong answer to this question, but most people would avoid giving their dogs bacon. The reason behind this is that there are some risks that come with feeding bacon to dogs, and it is also generally unhealthy.

As well to this, there are some dogs that should not eat bacon due to allergies or health conditions.

However, the majority of healthy dogs can eat a small amount of bacon and be perfectly fine, but due to how good it tastes, we can understand why you might sneak them a bit if they are hanging around and looking sad while you are cooking breakfast.

Bacon can actually be quite a high-value treat, as most dogs will do anything for a slice. After all, it has the perfect taste and texture, smells delicious, and is full of flavor.

However, although bacon is safe for dogs to eat and it is generally alright to give them a small amount, you should avoid giving it to them often or giving them a whole rasher.

This is because bacon is high in salt and fat, and when we fry it, we add even more oil and fat. These are all things that are not good for dogs, and they are also much more sensitive to these things than we are. Eating too much bacon can also cause them to gain weight.

There are also some dogs that should not be eating bacon at all, like those with pancreatitis. This is because the high-fat content of the bacon could trigger a flare-up in their condition.

It is not dangerous to give dogs bacon fat, but they probably shouldn’t eat it. A tiny bit on occasion may be fine for most healthy adult dogs, but this rich fat can lead to gastrointestinal upset, especially if your dog is known to have a sensitive stomach.

Any dogs on a diet or with certain underlying health conditions should avoid fat, including bacon fat. 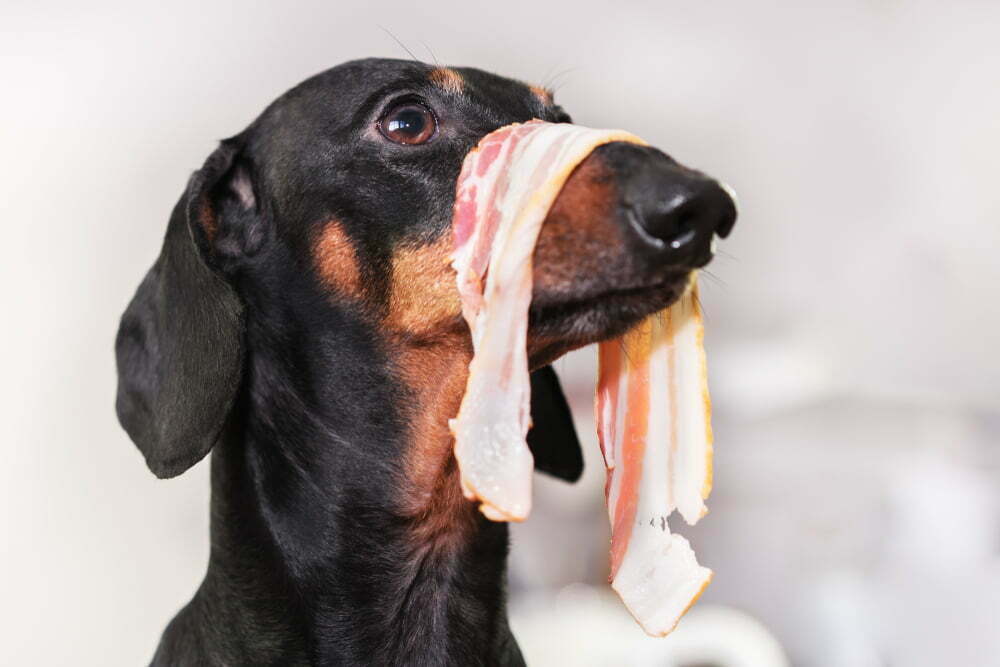 Can Dogs Eat The Grease From Bacon?

You should never give your dog the grease from the bacon as it is oily, high in fat, and very heavy on the stomach. It is also highly likely that the bacon grease will give your dog a bad stomach.

Is Bacon Bad For Dogs?

First of all, bacon is very high in fat and depending on how you cook it, adding things like butter and oil are only making it more unhealthy. While dogs need fat for energy, this should be in the form of healthy fats, like polyunsaturated fats.

Bacon is packed full of saturated fat and cholesterol, which is not going to be good for your dog. These fats are more likely to be stored in the body, increasing your dog’s chance of becoming obese.

Obesity can also cause your dog to develop other health conditions, like diabetes, cancer, and heart disease.

Too much fat can also cause pancreatitis, and dogs that have suffered from this condition before will need to avoid fatty foods for the rest of their lives.

Your dog can also get pancreatitis if they eat a lot of fat at once, which is acute pancreatitis, or they can develop it over time if they eat smaller amounts of fatty foods regularly.

Bacon has also processed meat that has been identified as a carcinogen linked to bowel cancer and a higher risk of gastric cancer.

As well as all of this, bacon is full of things like salt and preservatives, usually nitrates. Nitrates themselves are salt, so bacon is naturally high in sodium. Although your dog does need some salt in their diet, too much of it can make them unwell, cause dehydration, and even sodium poisoning.

As long as you only treat your dog with a small bite of bacon on rare occasions, they should be fine, but it is best to avoid giving them bacon altogether.

Can Bacon Kill My Dog?

It is doubtful that your dog will die after ingesting bacon unless they have had a very large amount at once. Bacon in itself is not toxic to dogs, but eating a lot at once can trigger other conditions that can put your dog at risk in the future. Moderation is something that is essential in all aspects of your dog’s diet.

Pancreatitis is something that can be caused by eating a lot of fat, which is something to be mindful of. It is also possible for your dog to become bloated if they drink a lot of water in order to quench their thirst due to the high salt content of bacon. If you are concerned, take your dog to see a vet.