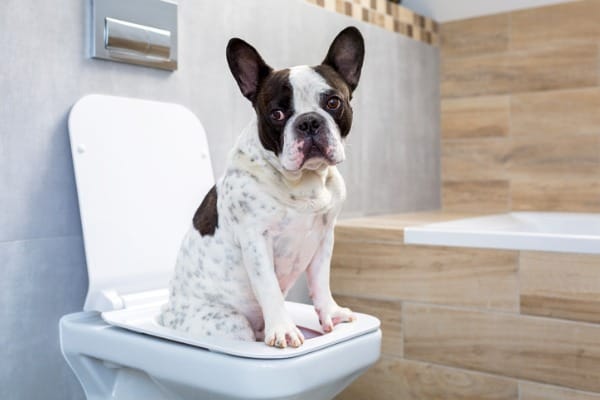 When nature calls, its best not to ignore it, right?

It’s easy to forget the importance of bathroom schedules when people can take a break whenever they need to.

Our dogs, on the other hand, rely on us to provide access to the toilet.

Whether it’s the backyard or the park, it’s all on us to make sure our fur babies have adequate potty routines.

Well trained dogs are pretty good about letting us know when they got to go.

In a perfect world, we would take them outside before they get in dire straits and do something like pee on your bed right in front of you!

How often do dogs and puppies need to go outside to pee? How long can a dog hold its pee?

It’s not complicated, but there are some things you can learn to help figure out how often your dog needs a bathroom break. 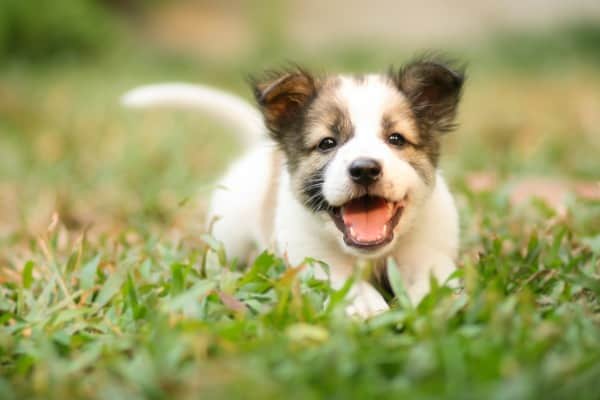 There is an easy rule when it comes to house training and caring for puppies.

For every month of age, they can hold their bladder for about an hour.

You can think of this relationship as something like this:

This means that an eight-week-old puppy (the minimum age a puppy should be adopted) can hold themselves for two hours, at best.

This applies to overnight hours too.

Parents of new puppies can expect to get up several times during the night to let the puppy out – or face cleaning up a mess come the morn. See our list of the best dog urine cleaners for that!

There is a light at the end of the long, exhausting house breaking tunnel, however.

Once most puppies reach 6-8 months, they can sleep the night through without needing to urinate.

Most puppies can be expected to be fully in control of their bladder and bowels by the time they reach a year.

Puppies often pee inside because they don’t know any better.

Getting on a consistent potty schedule will make your life and theirs much easier.

Before they learn, they will pee the moment they feel the need to.

So it’s time to think a few steps ahead of them and get them outdoors before the urge strikes.

The sooner they pee outside, the sooner you can praise and reward for this behavior.

The sooner they will understand that the grass is the place to go.

So how often do puppies pee?

It depends on their age, but younger ones will need to go outside up to eight times between waking up and bedtime.

Remember the rule – they can hold it an hour for every month of age.

So when they get older, that number will decrease.

Eventually, they will reach the point where they won’t need out more than 3-5 times daily.

Puppies do well when let out first thing after they wake – like with adult dogs.

But don’t forget that puppies nap quite a bit throughout the day, so ushering them to the backyard each time they wake up is a wise move.

They will usually need to do their business shortly after eating and drinking, so try to schedule potty breaks after meals as well. 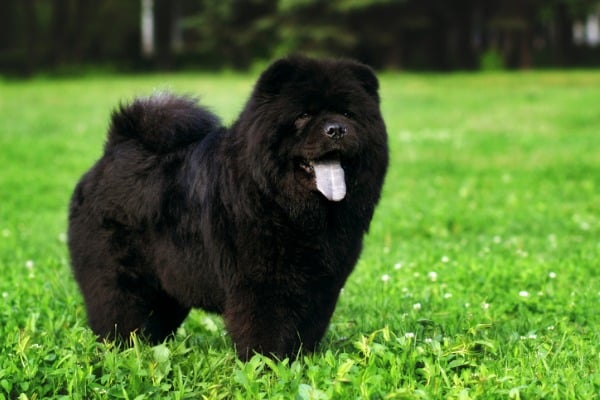 Fully-grown and house trained dogs are often expected to go 8-9 hours without using the bathroom.

Of course, just like us, it depends on how much water they’re drinking.

It’s important to gauge how often they go against how much water you’re giving them.

If they can go longer than 10 hours and when they do, their urine is darker for example, it’s a sign they aren’t getting enough water.

So many people work full-time jobs that keep them away from home for most of the day, and dogs can get used to this kind of schedule.

Is this okay, though?

Generally, yes – it’s fine to expect an adult dog to go this long during the day without peeing.

It depends a lot on the dog and the environment, but most dogs can hold it in for the duration of a typical workday.

They can often hold it in for longer than that – but it isn’t something you want to ask of them regularly.

Having a dog hold their urine for too long, and too often, will put them at risk for infections and other health issues.

If you notice your dog’s urine smells fishy or their urine has mucus or worse, has the presence of urine crystals there is already a problem brewing.

It can also set them up for incontinence later in life.

And for your house, you raise the risk of accidents where urine stains and smells have to be removed from carpets, valuable hardwood floors, irreplaceable wood furniture and sometimes your subfloor if repeated mishaps occur.

How often do dogs need to pee?

Dogs need to empty their bladders 3-5 times a day. Ideally, you would let them out ever 3-4 hours, but work schedules don’t always allow it.

Does that mean you need a pet-sitter or to send your pup to doggie daycare?

Not necessarily – you can still get those 3-5 breaks in on workdays. One of the first things a dog needs in the morning is to be let outside.

When you come home from work, they should be let out first thing – they’ve been holding it all day.

Getting another 2-3 bathroom breaks in before bed is pretty easy, especially if an evening walk is on the agenda.

Not everyone works a typical 9-5 day, but the general idea can apply to most schedules. Dogs adapt quite easily. 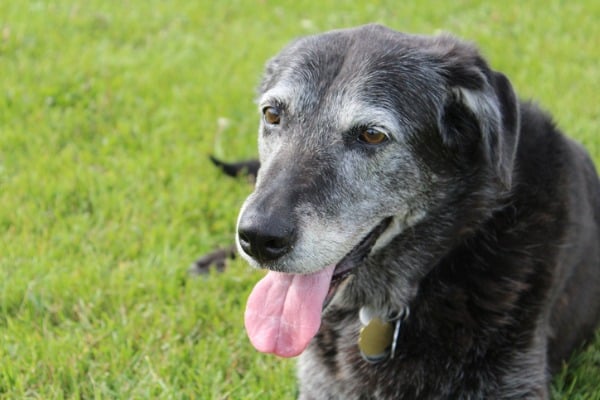 Older canines can be a special case when it comes to bladder control.

What makes a dog “geriatric?”

Breed plays into biological age when it comes to dogs, as does their size.

Giant breeds such as Great Danes, Bernese Mountain Dogs, and Mastiffs can be considered elderly at 6-7 years old.

Mixed breeds similar in size will have roughly the same lifespans – most dogs in the 75+ lbs range are elderly by 6-7.

Toy breeds, which have some of the longest lifespans of any group of dog breeds, aren’t usually classified as elderly until they reach ten years or more.

When your dog reaches this stage of life, their needs can change. Diet, exercise, and potty routines can differ.

An old dog might suffer from incontinence and dribble urine indoors when they’re in between bathroom breaks. You’ll see this when they leak urine when lying down for example.

Some canines can develop dementia, which frequently causes them to urinate inside.

Even if they’re not confused, older dogs can benefit from a bathroom schedule.

You might find it helpful to take them out more often – the routine might resemble the one you set for them as a puppy.

An elderly dog will also have a harder time holding their bladder for long stretches.

Even if they were used to going eight hours or more without peeing in the past, it’s not something you can expect of them.

The Solution to Urine Pollution 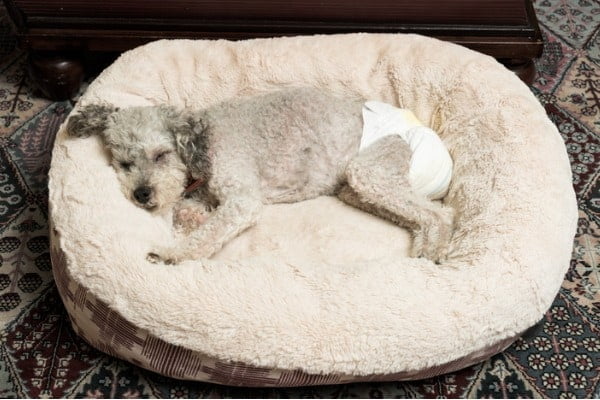 It’s fair to expect an adult dog to hold their bladder while you’re at work – provided you don’t work long shifts.

Anything over nine hours is pushing it – and making your dog uncomfortable in the meantime.

And while dog urine may not be harmful to humans, you’re definitely pushing your luck for regular accidents happening in your house.

None of us wants to live with that!

Remember, they don’t want to pee on the floor any more than you would.

If you have long shifts, it’s better to rely on a pet sitter, trusted friend, or family member to give your dog a short break.

Even a 5-10 minute recess is enough to hold them over while you finish that double shift at work.

What if you have a puppy or senior dog?

You’ll want to be sure someone can step in and let them out a few times a day.

Crating them or putting diapers on them will avoid a bigger mess, but it’s not solving the root problem.

Diapering puppies can have a negative effect on house training as well, including the risk of urine scald, so that option should be used as a last resort.

An elderly dog or any dog with health issues that include incontinence can be helped with diapers, but you should also provide regular trips to the bathroom. 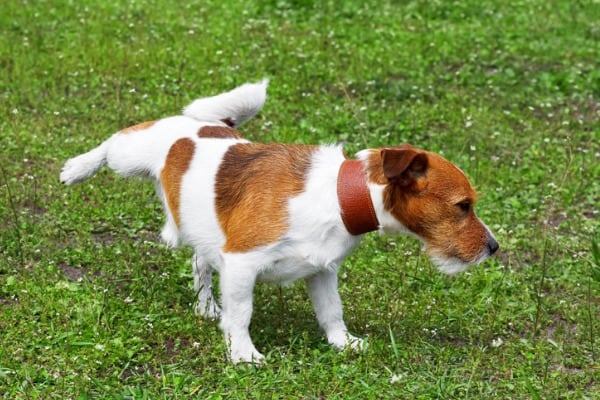 It can be easy to forget how much our dogs look to us for their basic needs.

They can be very clever, independent animals, but they still need our help for many things.

Keep in mind that dogs have bathroom needs similar to our own, and their very health relies on being able to depend on us to look after them.

How long can a dog hold its bladder?

Every dog is different, but leaving them alone while you’re at work, shopping, or having an evening out is usually no issue.

The best practice when you have to leave them for long periods is to take them out right before you go, and as soon as you get home.

If you leave your dog too long, you’ll find out exactly how long they can hold their pee – which is why we do not recommend this experiment at all!

If all else fails, ask someone you trust to look in on them. Your dog – and your carpet – will thank you.

link to Are Bearded Dragons Affectionate?

As bearded dragons are not as fluffy or as cuddly as cats or dogs, how are they affectionate? With cats and dogs, they show affection by licking our faces and cuddling up to us on the couch, but how...