Whenever you catch your dog eating something they shouldn’t, it’s natural to get concerned. Sometimes dogs can eat things that cause them harm and can even require medical attention. While less common than eating some food, some dogs can and will try and eat human hair that they come across. They could find it on the floor or get at one of your hairbrushes.

Contents show
1 Is It Bad To Eat Human Hair?
2 Why Do They Eat Human Hair?
2.1 Development
2.2 Pica Condition
2.3 Attention-Seeking Behavior
2.4 Boredom
3 How To Stop Dogs Eating Hair
4 What Happens When A Dog Eats Human Hair?
5 Conclusion

Here we’re going to go through what happens when a dog eats human hair, why they might be doing it, and how you can stop them from doing it. 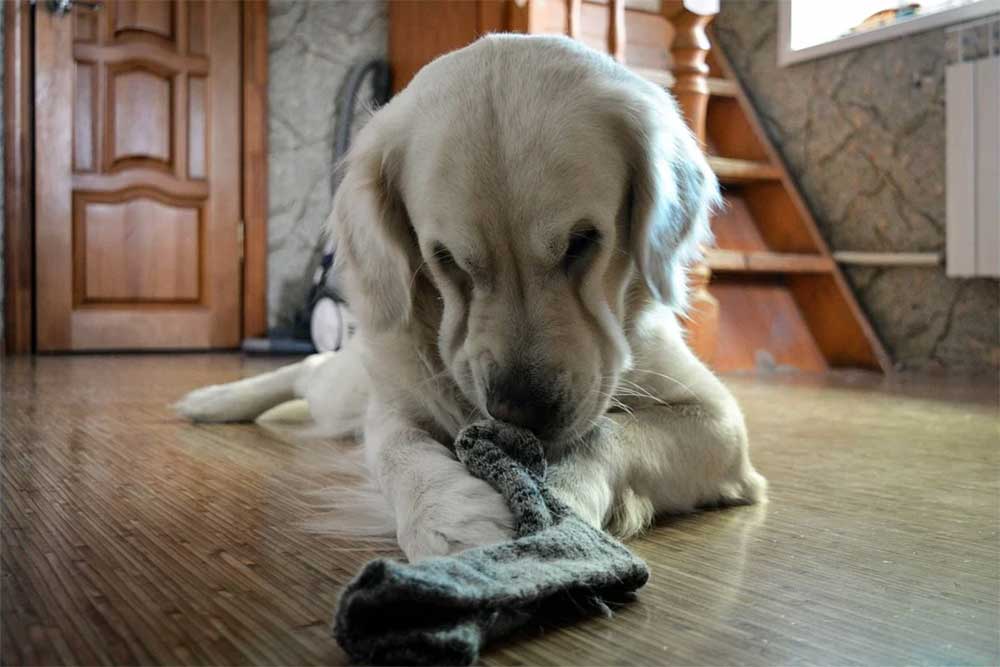 Is It Bad To Eat Human Hair?

Is it bad if your dog eats your hair? Yes, but not for the reasons you might think. Your dog should be fine if they eat human hair, they’re not going to get harmed from it. That said, the fact that they’re eating human hair may be a symptom of a larger problem your dog is facing.

You should still try to limit how much hair they eat while training them to ignore hair and other non-edible debris completely. While small, there is still the chance of some complications arising from a dog eating too much hair off the floor.

Why Do They Eat Human Hair?

So why is your dog eating human hair? To stop your dog, you need to figure out why they are doing it in the first place. By establishing why they’re eating human hair, you can better curtail their desire to do that and stop the bad habit at its root. Dogs eating things they shouldn’t is a common problem and there are four generally accepted reasons why this happens.

One of the main reasons that dogs put things in their mouth is exploration. Puppies are like human children in that they chew and bite things to get acquainted with them. By exploring the world around them, puppies can eat things they’re not supposed to, like hair.

Hair is also a unique texture and responds differently to the breaths and bites of dogs. This responsiveness can be interesting to dogs and capture their attention, motivating them to munch on the hair even more.

Chewing hair at a young age is absolutely normal for a developing pup, so don’t worry too much if you have a growing dog that’s trying to bite at your hair. That said, it’s still a young habit that you want to break. While many dogs will stop by themselves, you don’t want your dog to carry this habit into their adulthood.

The best way to stop a developing dog from biting hair is to give them something else to chew on. That’s why chew toys exist, after all. They don’t just keep your dog busy; they can help wean the dogs from unhealthy chewing habits by giving them a positive outlet for that desire. When the dog tries to eat human hair, gently direct their attention to chew toys and other interesting chewing items instead.

Pica is a rare condition that motivates dogs to eat things they usually wouldn’t eat. In fact, pica isn’t restricted to animals, humans have developed pica and as a result, they have eaten wild things like drywall or mattress foam. Pica is a weird condition, as you may have figured by now.

In dogs, pica manifests as a compulsion to eat things that aren’t edible. You can understand why a dog tries to eat some dropped food that won’t do their stomach any good but, when your dog constantly tries eating non-edible objects, that’s a different kind of problem. Eating human hair is a common manifestation of pica in dogs, so you need to consider pica as a cause of their bad habit.

If the dog is already developed, their pica likely comes from learned behavior. They could be doing it because they’re stressed or suffering from anxiety. Some do it because there may be gaps in their discipline and they might even eat human hair in an attempt to avoid being punished. If your dog had a previous home, pica is much more likely as they may have trauma that they’re solving through this bad habit.

Unless you’re confident in your dog-training abilities, most pica cases require a professional dog trainer or a trained behaviorist. These individuals can better understand your dog, its problems, and work out how to deprogram those behaviors out of your pet.

One of the simpler causes is that your dog may just be seeking attention. If the hair they’re trying to munch on is still a part of your head then you can guarantee they’re only doing that for attention.

Of course, if the dog is looking for attention then you need to try and ignore them so you don’t reinforce their bad habits. If the hair was on the floor, or on a brush, then you need to rethink how you tell your dog to stop chewing it.

Dogs are loyal and crave the attention of their owners and, as part of that, they learn what to do to get noticed. Don’t harshly discipline your dog when they do something you disapprove of. They might realize that misbehaving gets them attention, even if it’s negative. For some dogs, it seems that any publicity is good publicity.

Instead, ignore your dog if they try playing with the hair on your head. With hair on the floor, find ways to guide them away without acknowledging it or praising/punishing the dog for playing with that hair in the first place.

Then you should apply some positive reinforcement when they choose not to chew on any hair. This lets them know they’ve done a good job and, being smart when it comes to behavioral cues, your dog will realize there’s more to be gained by leaving hair alone.

Dogs can also try eating human hair because they’re simply bored. If you can rule out the dog’s development, any pica conditions, or attention-seeking behaviors then this is what you’re left with. Boredom is where bad habits tend to come from, so minimizing your dog’s time spent being bored stops these kinds of problems before they even start.

Boredom in dogs is usually because your dog isn’t getting two things – a lack of exercise or a lack of stimulation. Exercise is simple enough; you need to take your dog on more walks so they can get physical and be more tired at the end of the day. As for stimulation, this is the mental exercise that your dog needs to have so they can have a peaceful mind that won’t motivate them to explore and chew things. Buying chew toys and other activities should be enough to keep a dog happy and motivated.

How To Stop Dogs Eating Hair 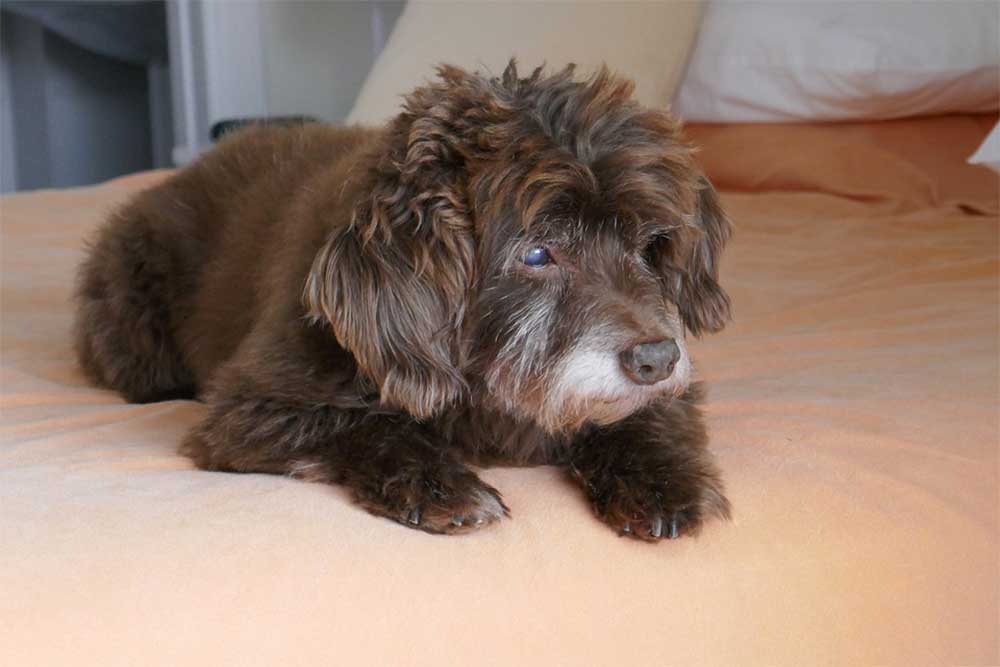 Now that we know why dogs eat human hair, you can treat them so that they stop. With the above explanations in mind, there are four main things you should do to try and get your dogs to stop.

What Happens When A Dog Eats Human Hair?

So, what happens when your dog finds some human hair and eats it? Most of the time, it’ll pass through your dog’s digestive system without there being any complications. That said, if the dog eats a lot of hair and it forms a hairball then you may have a problem. These will cause gastrointestinal stress and maybe even a blockage that’ll require a trip to the veterinarian’s office.

Some products used for our hair are toxic for dogs too, so if they eat too much then they can suffer negative effects from those chemicals. In those cases, you should take your pet to the vet office since the chemicals in hair products can have serious and fast-acting consequences for your dog.

If hair is making its way through your dog’s digestive system but there’s a strand still half-lodged in its backside, don’t pull on it. This can be dangerous since you don’t know why that strand of hair is still stuck. By leaving it alone it’ll come loose by itself with no issues for you or your pet.

We’ve learned that a dog eating hair is typically nothing to worry about, though it is a bad habit that should be disciplined out of your pets before they become adults. In large quantities of hair that have been treated with dangerous chemicals, a dog eating human hair can be harmful to its own health. In those cases, they will need a trip to the vet’s office.

Treat your animal by finding out the underlying cause and removing their reason for snacking on human hair in the first place. This doesn’t just stop them now but it also ensures they won’t do it again in the future. You may need some help, which is why qualified veterinarians and dog trainers/behaviorists can help you understand the mind of your dog and why they’re doing this.

Hopefully, with the information we’ve covered above, you can accurately diagnose your dog’s hair-eating habits and work to solve them, guaranteeing that your dog is living a healthier and more fulfilling life.