At a time, people wanted smaller dogs that could fit into their handbags. However, there has always been a demand for tall dogs as well.

Although, owning a larger dog comes with its own set of challenges and responsibilities compared with a small dog. 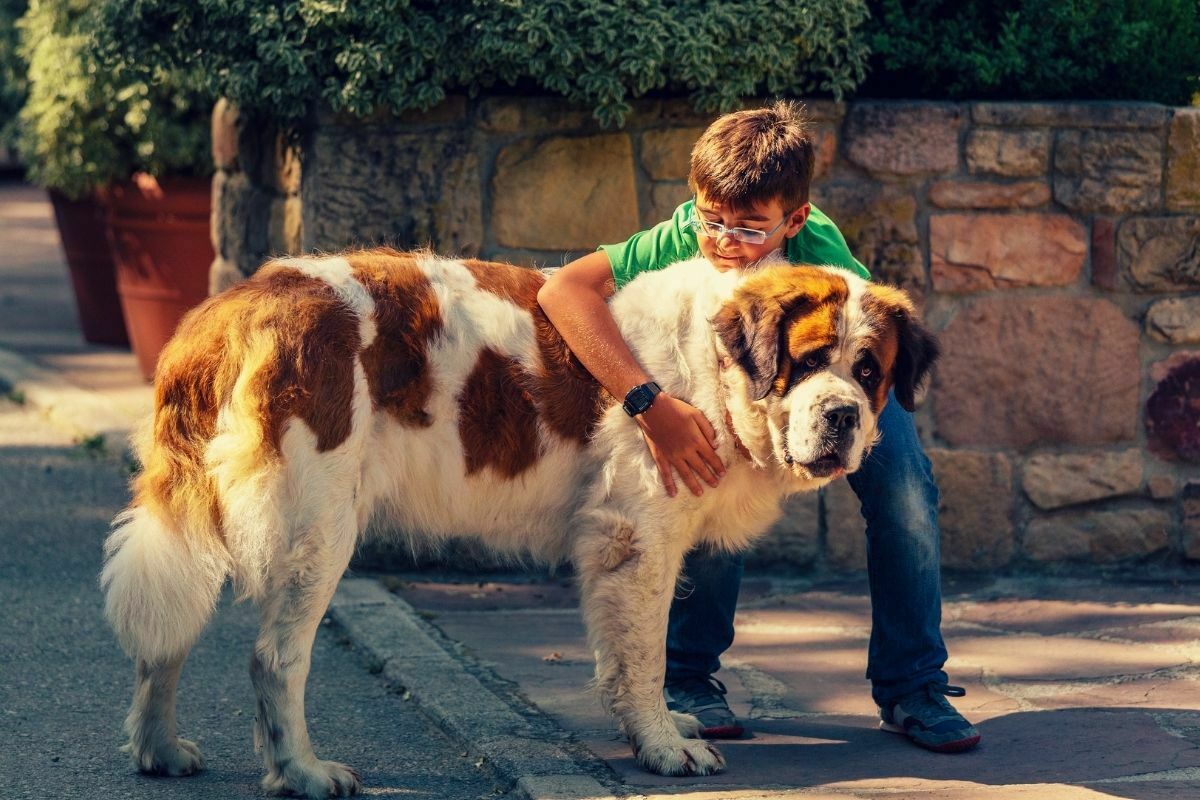 If you are interested in becoming the owner of a tall dog, then this article will be perfect for you. We have put together a list of the tallest dog breeds you can own now. 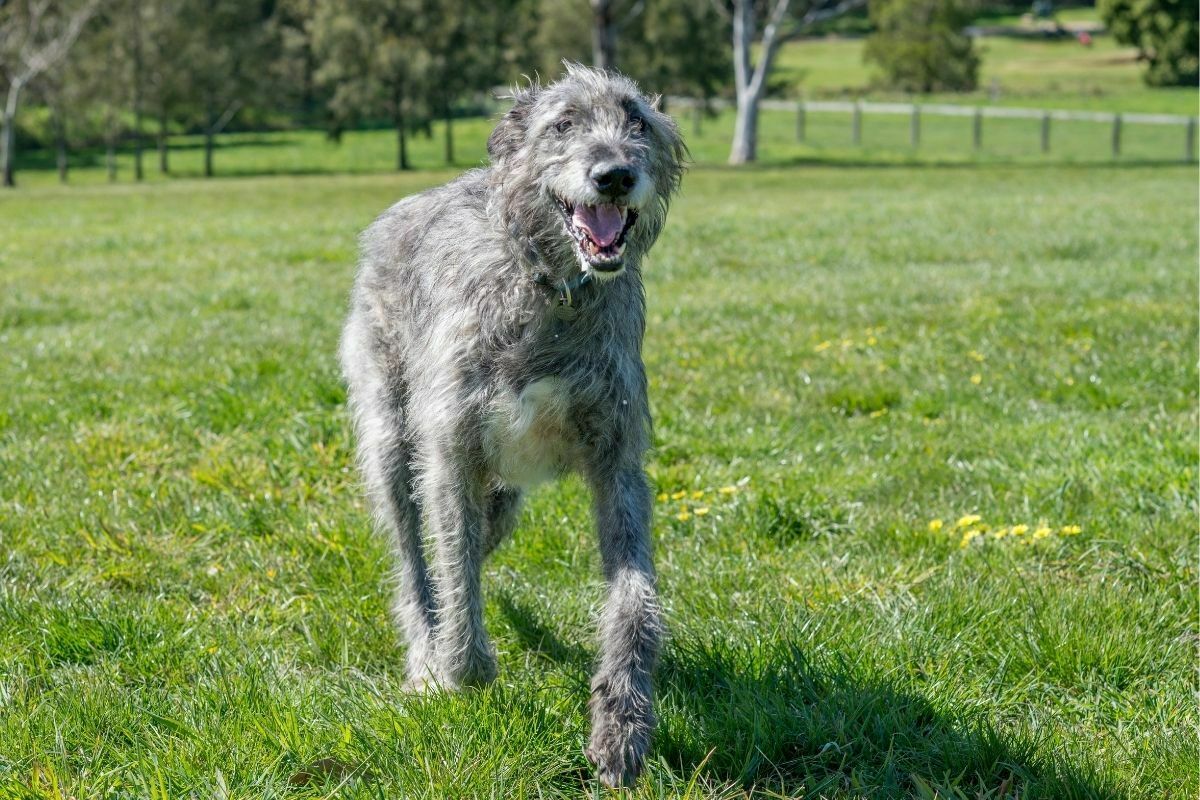 The Irish Wolfhound is the tallest breed of dog that you will ever find or come across. Their ancestors are said to date back to ancient times.

However, the Irish Wolfhound first became popular during the 15th century. They were used to help control the wolf population in Ireland. Hence, where they get their name from.

Today, these large dogs are seen as very eye-catching companions due to their size. They are dignified and majestic dogs with a relaxed and calm nature, making them perfect for families.

When standing on their hind legs, these dogs can be around 7 feet tall and weigh up to 180 pounds, ready to fight off wolves. 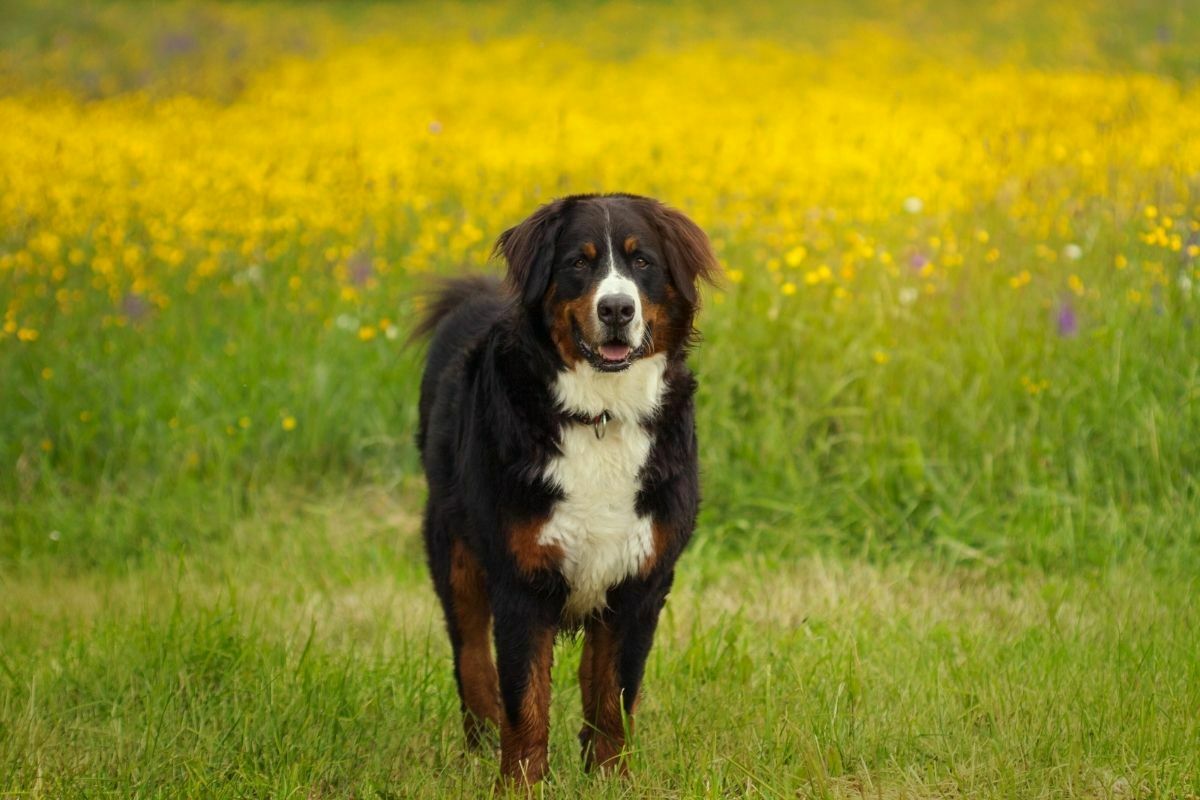 They are distinctive due to their tri-coloured fluffy coats and calming and good temperament.

It is known that they can go around 2.2 feet and weigh around 110 pounds. It is no wonder this dog breed is such a popular choice for families and companions. 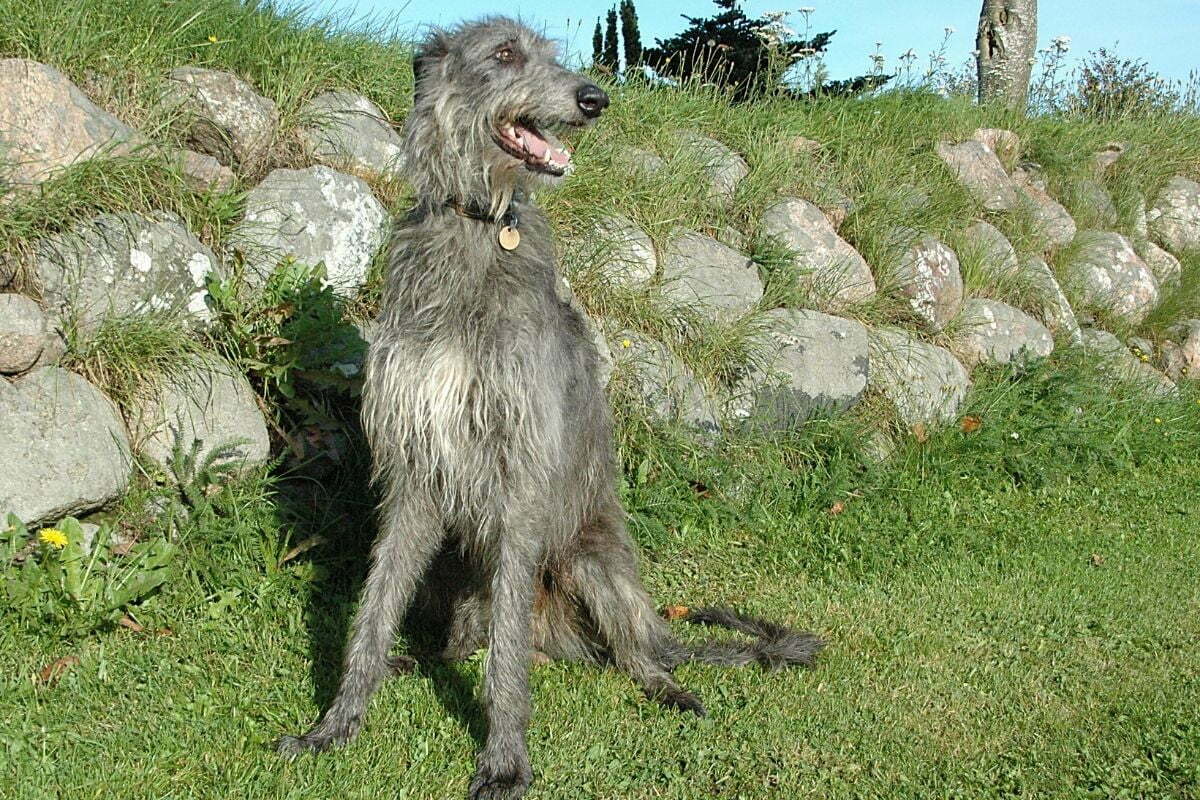 The Scottish Deerhound has a similar appearance to the Irish Wolfhound.

However, the Scottish Deerhound is considered the royal dog of Scotland, UK. This is another of the top tallest dogs in the world, like the Irish Wolfhound.

This breed of dog has been bred to chase and hunt. These dogs love to run and need a lot of exercises to satisfy their needs.

Furthermore, the Scottish Deerhound will create a strong connection to their families. As a result, they don’t enjoy being left alone for long periods of time. They weigh around 110 pounds but reach a height of 2.6 feet. 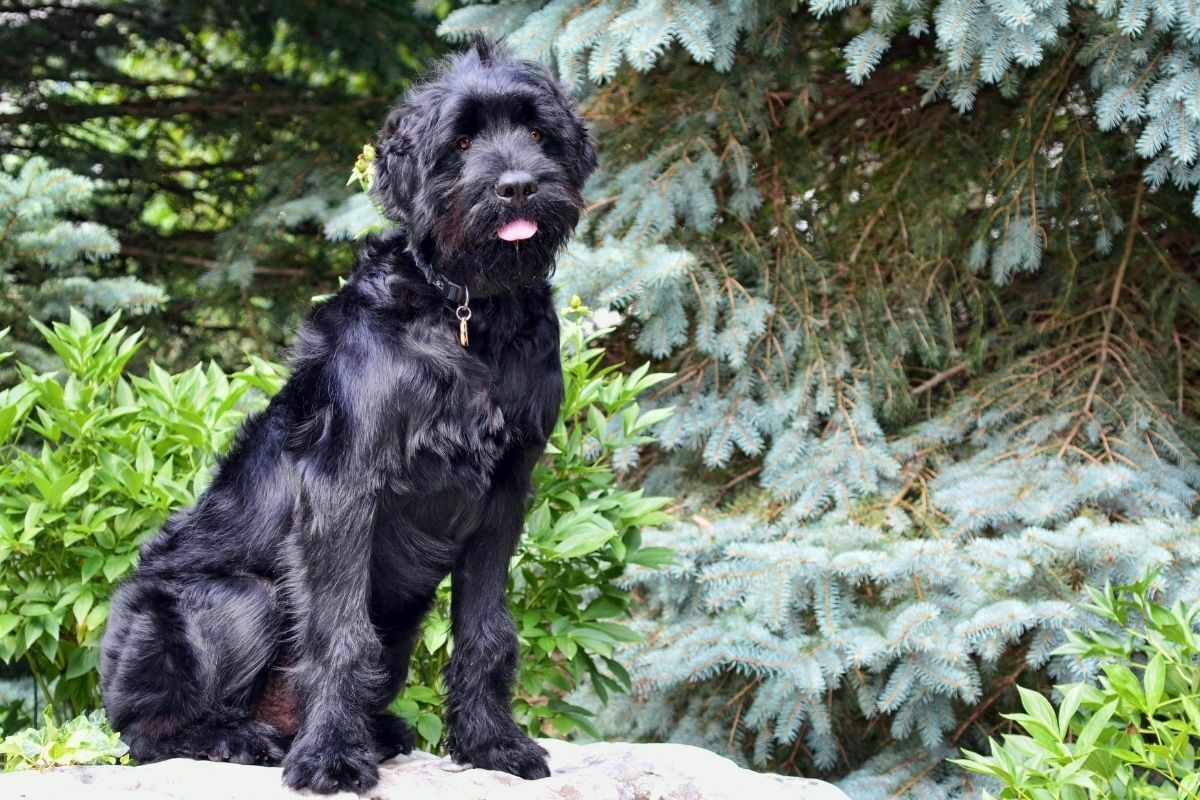 Originally developed in the 1940s by the Soviet government. With the idea to create powerful guard dogs. These are brilliant dogs that have maintained their protective instincts.

They are known for being loyal to their family and ovens and don’t particularly like strangers.

Typically seen with a thick, shaggy black coat. They can grow to around 2.3 feet in height and weigh around 149 pounds. These truly are big dogs. 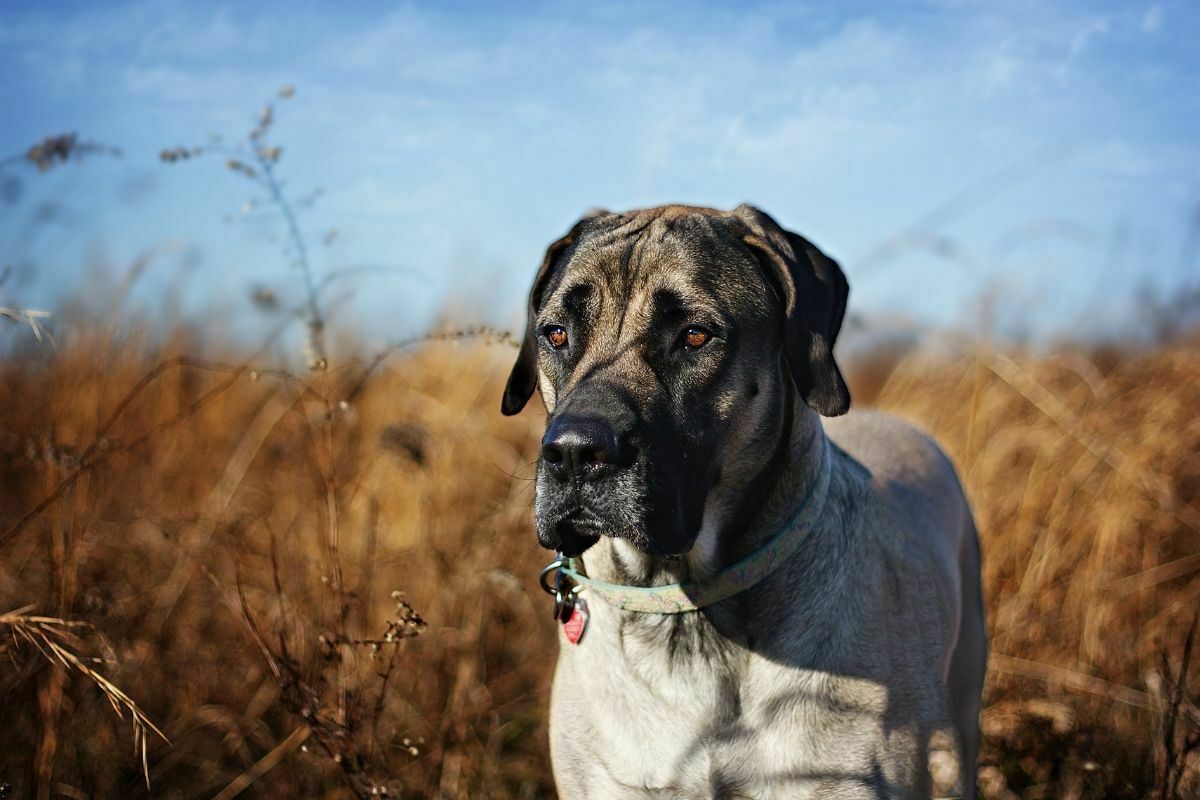 The Mastiff is an extensive dog that is known for its wrinkled forehead. It is believed that after World War 2, only 14 Mastiffs survived in England. However, the popularity of this breed grew once it was established in America.

These are very loyal dogs that are devoted to their families. Often, Mastiffs will be cautious of other dogs and strangers. They are susceptible dogs that need lots of positive reinforcement, especially during training.

However, these dogs will always be loyal to you. Reaching a height of around 2.9 feet and weighing 220 pounds. 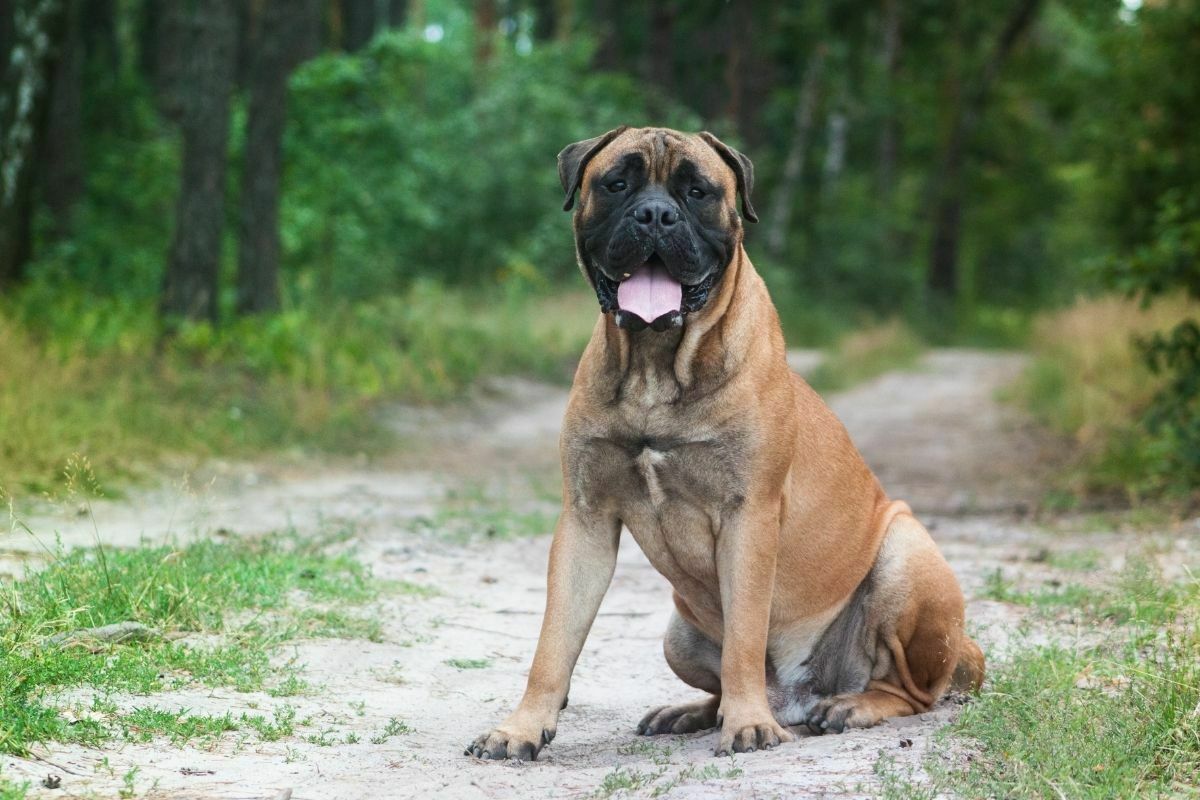 Seen as the ultimate guard dog. The Bullmastiff was originally bred during the 19th century, and they would be seen guarding English country estates and private game preserves.

These dogs are known for being easy to train, but you must train them early; otherwise, they can become aggressive.

Overall, the Bullmastiff can grow to around 2.2 feet in height while weighing up to 130 pounds. A powerful dog that will keep your home protected. 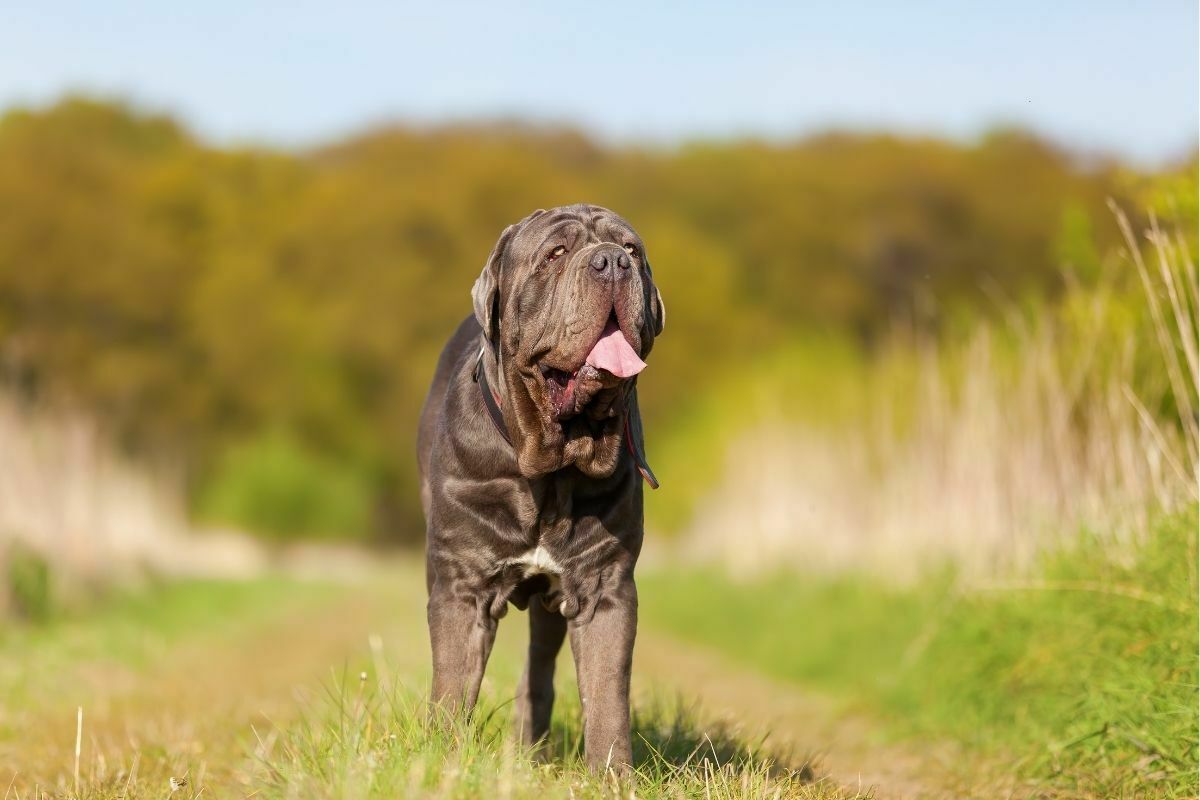 The Neapolitan Mastiff dates back to Ancient Rome. These are mighty dogs that have a very striking appearance. This is due to the loose skin across their bodies and faces.

It is straightforward to post a Neapolitan Mastiff, and they are very loyal and protective of their owners and family. An average height of 2.5 feet and weighing in at 154 pounds. 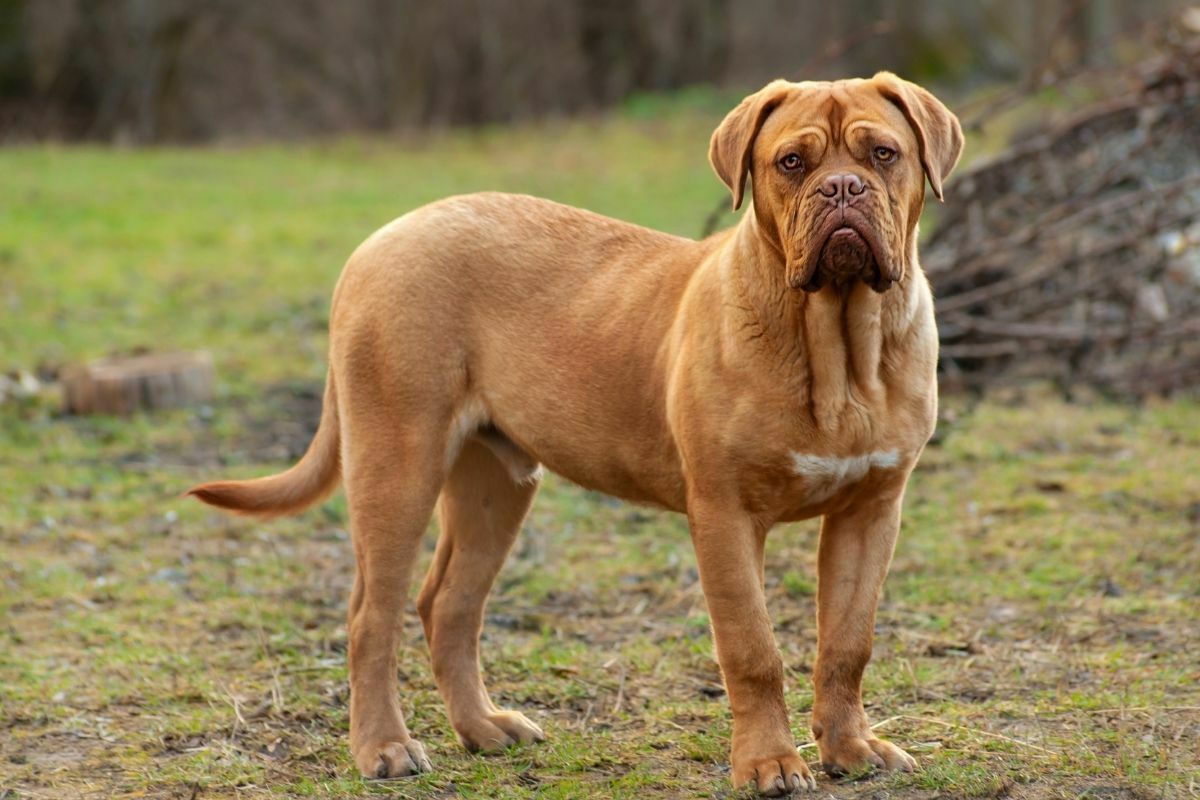 The Dogue de Bordeaux has a similar appearance to the Bullmastiff. They are known for their very expressive eyes and face. They are also believed to have the largest head of any dog breed.

These are very loyal and sensitive dogs. However, they have a known stubborn trait, so it is advised to train this breed of dog as soon as possible.

Height-wise, the Dogue de Bordeaux can grow to an impressive 2.1 feet in height. Yet they weigh around 143 pounds. These aren’t the lightest of dogs to own. 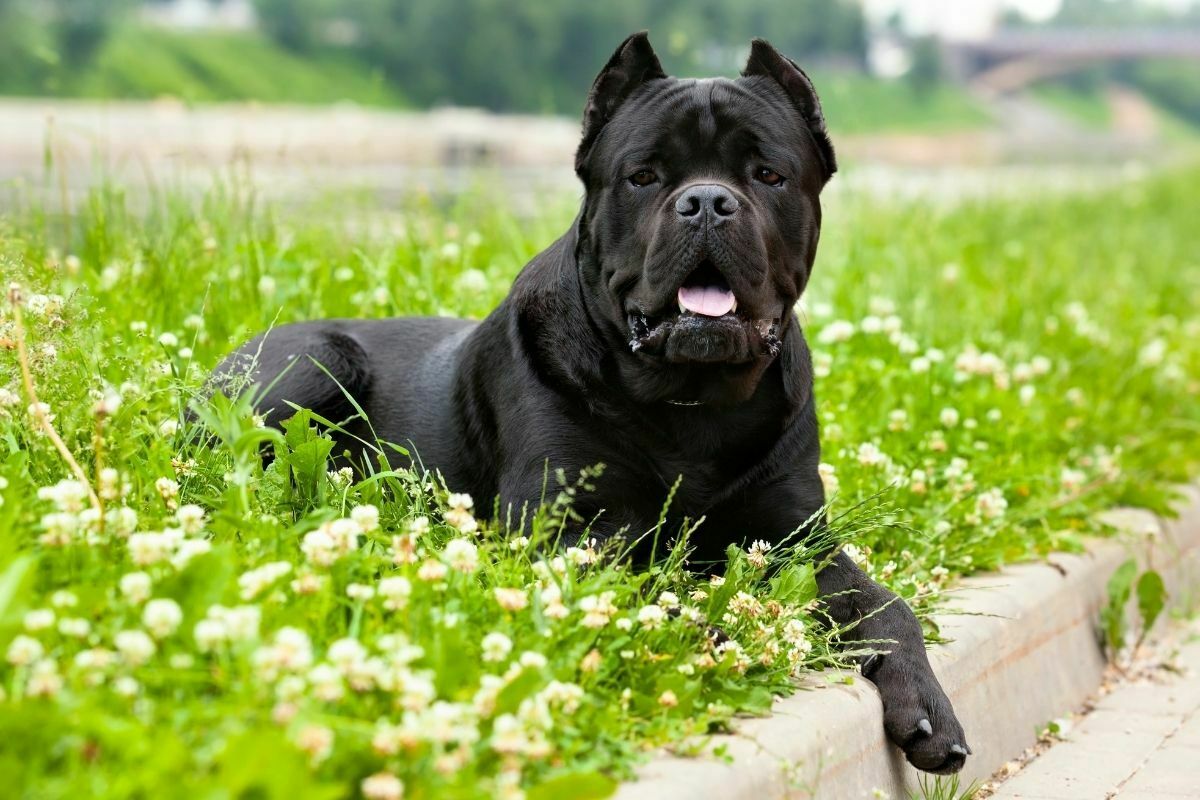 There are some similarities between the Cane Corso and Dogue de Bordeaux due to their expressive faces. The ancestors of the Cane Corso are believed to go as far back as ancient times to the ancient Greeks.

There they are believed to be guard dogs for their masters. However, this breed of dog was almost extinct at one point.

It is known that the first appearance of the Cane Corso was in 1988 when they were imported to America. These are very loyal and strong dogs.

They are constantly alert and look intimidating, making them another great guard dog.

However, they can become quite protective, so early training and socialization are a must. 2.2 feet in height and weighing around 110 pounds.

It cannot be surprising to see the Great Dane on our list. They are one of the most recognizable giant breeds of dogs that you will see.

Originally, the Great Dane was bred to become companions for its owner. They were also bred to hunt wild boars in the countryside.

The Great Dane is a very lovable dog breed due to its easy-going nature. Also, they are very loyal and friendly.

They make the perfect companion due to their alertness and will guard their family and home at all costs. One of the taller dogs on our list comes in around 2.8 feet in height and weighs a maximum of 198 pounds.

A loveable and fluffy giant dog, what’s not to love. Very easy to recognize due to its very fluffy white coat. However, this dog breed was developed to protect livestock and work with shepherds.

These are very patient dogs that will fight off predators trying to eat their livestock or harm their families. They do like their own independence but do get along with children. Maximum height of 2.6 feet and around 119 pounds in weight. 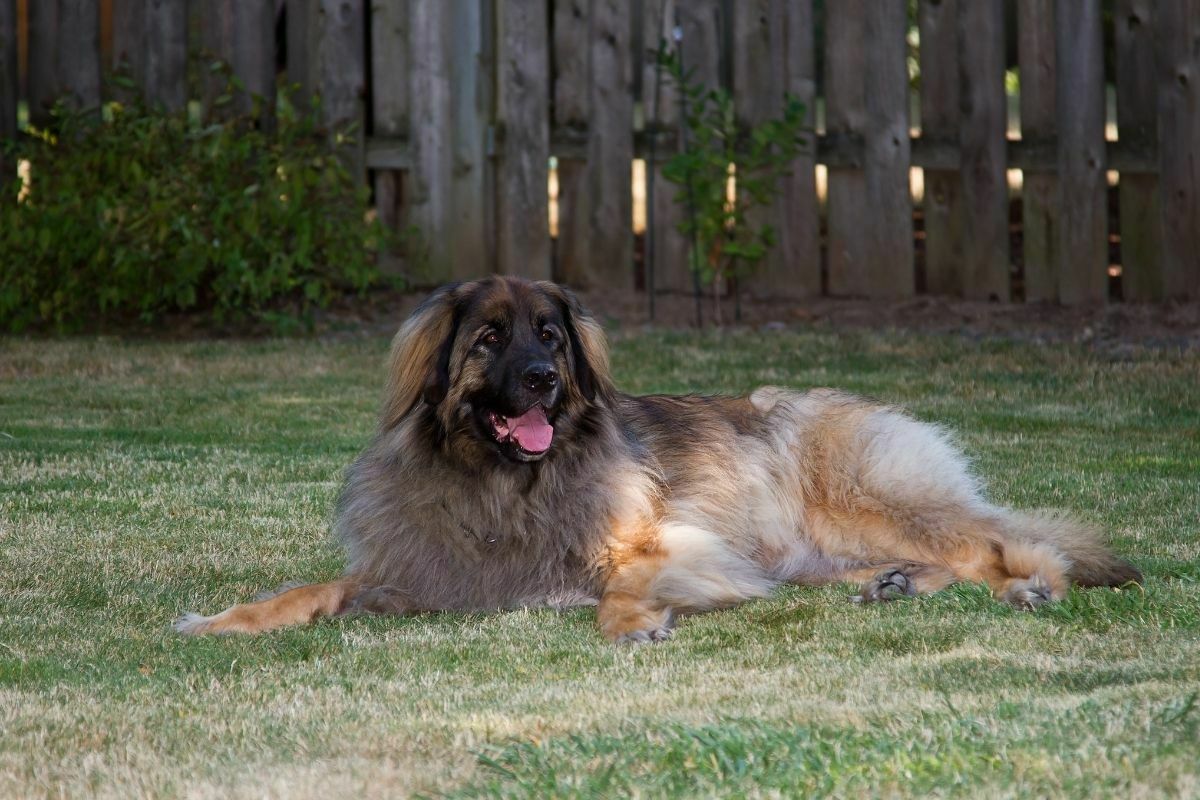 The Leonberger is an excellent working dog and watchdog. This breed was originally bred to be a companion for royalty in Europe. However, later on, they gained the trait of a working dog.

These are very loyal dogs that are incredibly strong and get jobs that require pulling. Maximum height of 2.6 feet and weighing in at 165 pounds. 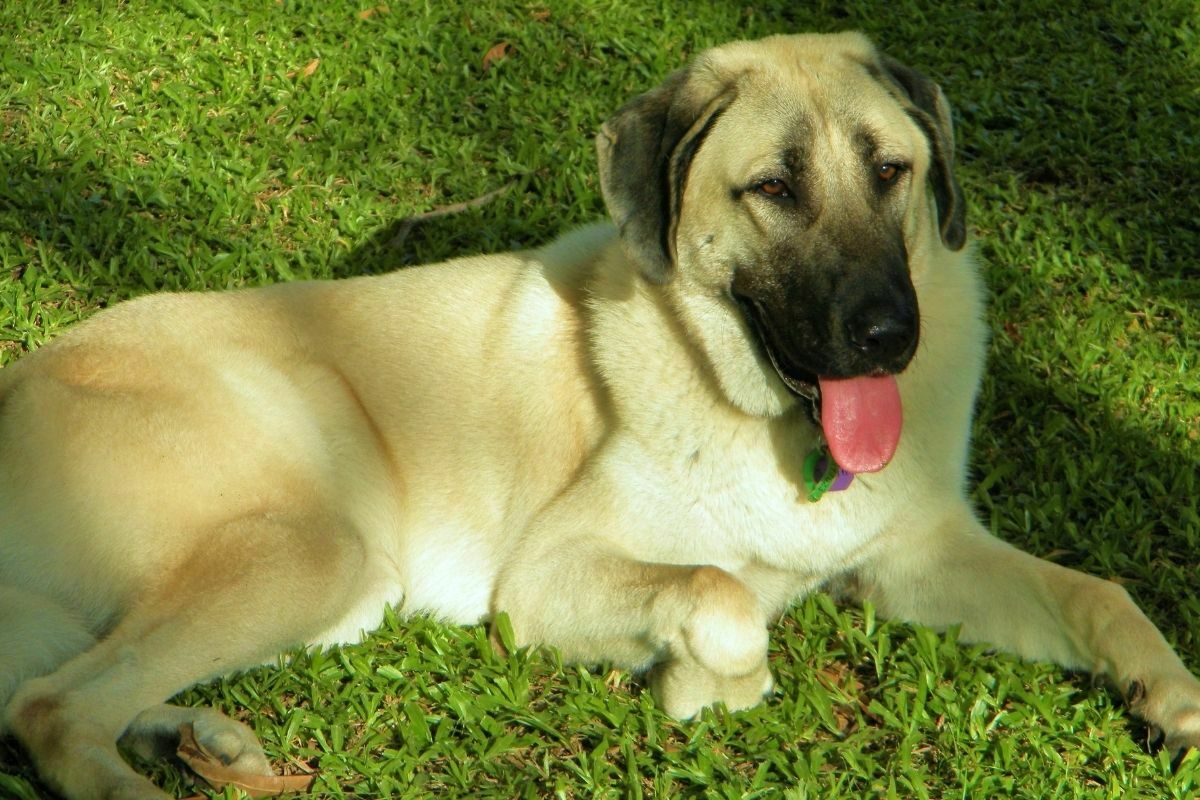 The Anatolian Shepherd is seen as a working dog. They are loyal and smart but can always be very protective and territorial. These dogs can weigh around 150 pounds and grow to around 2.5 feet in height. 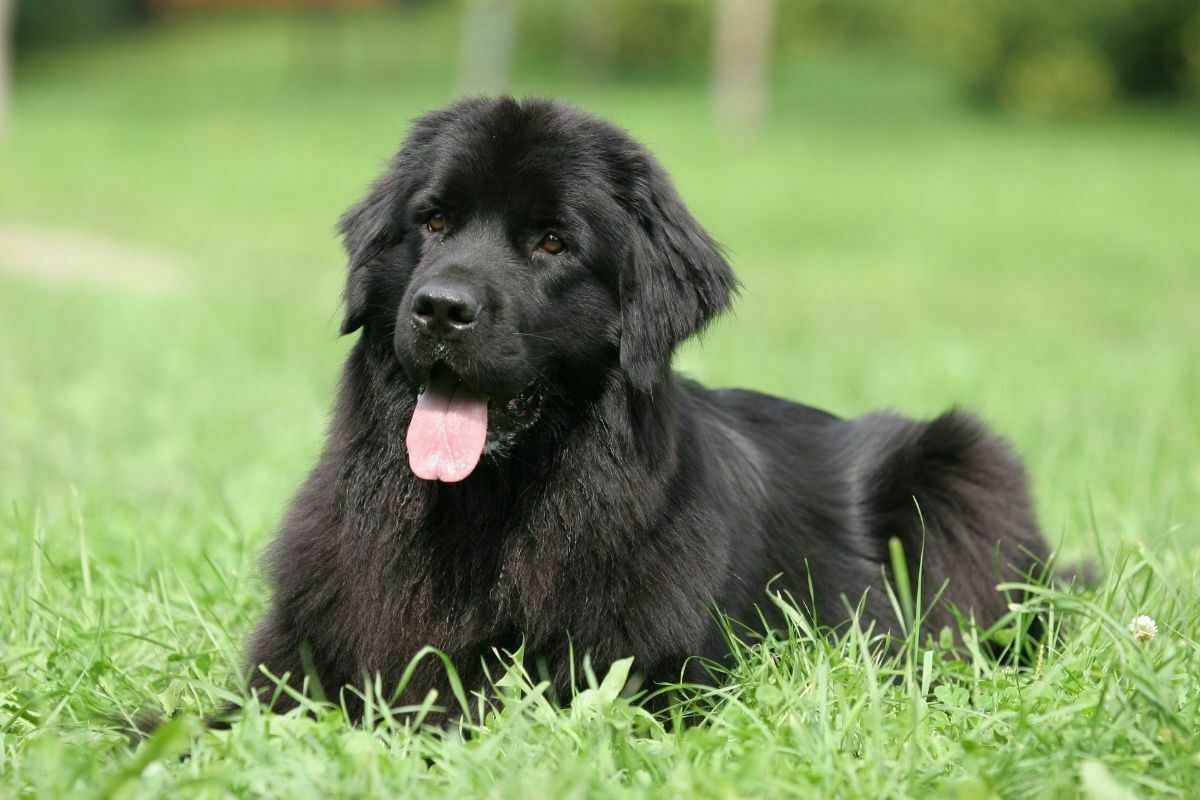 The Newfoundland is considered a strong working dog that loves the water. This breed of dog actually has webbed feet, and the outer layer of their coat is water-resistant.

This is because the Newfoundland dog was first used to work alongside Canadian fishermen. They could be seen rescuing people from the water and pulling nets out of the icy water.

Today, these dogs are still performing rescue missions in the water. These are brave dogs, yet they are also loveable and gentle with big hearts.

They are very to train, which makes them such a sought-after breed for families. They have a height of around 2.4 feet while weighing around 154 pounds. 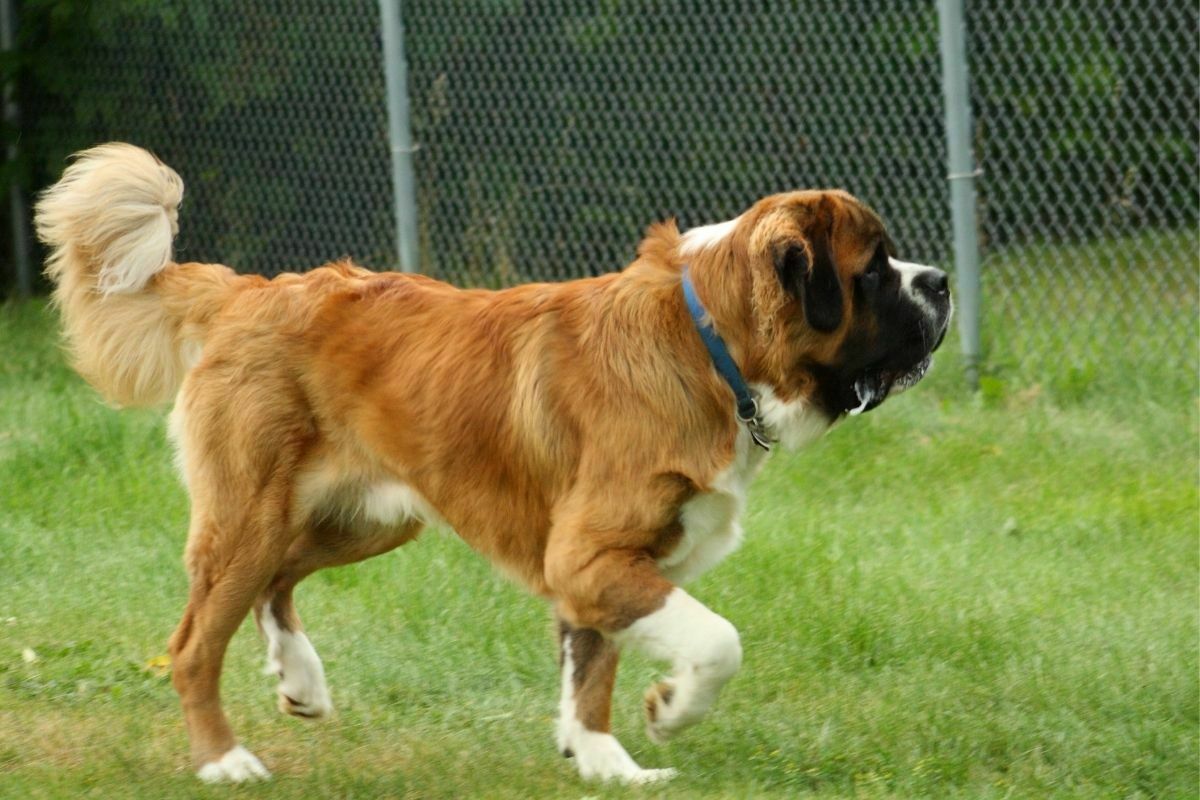 Another famous breed of dog is known for its large height. Native to the Swiss Alps, this breed of dog was used as a rescue dog for anyone who may have gotten lost or buried in snow by avalanches.

Although, it has also become a beloved dog in film and tv and takes on the nanny role in a lot of families.

An amiable dog that has gained massive popularity over the past few years. These dogs may be loveable, yet they are still tall, coming in around 2.9 feet tall and 180 pounds in weight. 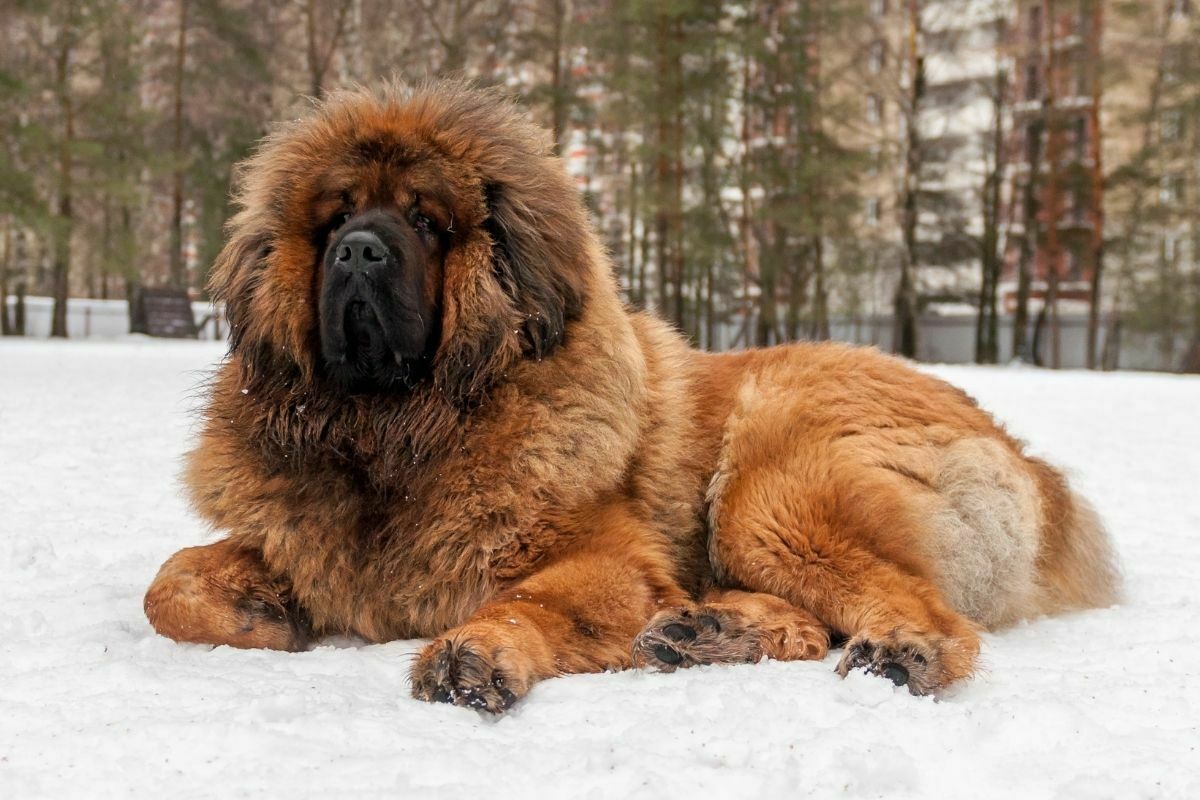 The Tibetan Mastiff is seen as a very ancient yet intimidating breed of dog. They are very protective dogs, as they were once considered the guardians of the Himalayas.

This is due to them being used to guarding the Tibetan monasteries. Alongside this, these dogs can be very independent and strong-willed.

Therefore, they are suitable for first-time owners, as they may be a bit of a challenge.

These dogs are known for responding how they see fit to a situation, no matter how they have been trained. Their instincts are stronger than their training. These powerful dogs can grow to a maximum height of 2.4 feet and weigh 149 pounds.

Various dogs will be able to fit your needs. As you may have become aware, a lot of these tall dog breeds make excellent watchdogs. These are protective dogs that make great companions and are very lovable.

Hopefully, in this list, you have found your next tall dog to take home.