Why do turtles dig holes? This is a question that many turtle-owners find themselves asking, as it’s a very common behavior.

Turtles are very good at digging because they have strong claws on their front feet. This allows them to dig into soft soil and create tunnels.

For the most part, the majority of turtles will typically decide to dig holes because they want to prepare themselves for winter and stay safe.

Although, in some instances, turtles will also sometimes dig holes in order to safely lay their eggs so that they can be protected, as well as to hunt for food.

Still, if you’re noticing that your turtle is frequently digging holes (or you’re a turtle fan that’s simply interested in learning more about them) then this article is for you.

Below, we are going to be exploring some possible reasons why turtles like to dig holes.

So, whenever you’re ready, let’s dive right in!

Why Do Turtles Dig Holes?

As we have already mentioned above, there are a variety of reasons why turtles like to dig holes.

However, pinpointing the exact reason can be a little difficult.

Let’s take a closer look at some of the main reasons that turtles like to dig holes below:

The first thing that comes to mind when thinking about why turtles like to dig is hibernation. In fact, one of the primary reasons that turtles like to make holes is due to their need to hibernate.

When temperatures drop during the fall or winter season, turtles begin to enter a state of torpor where they slow down their metabolism, reduce their heart rate, and lower their body temperature.

As such, this helps to conserve energy and keep them warm through the cold months.

This is especially important for turtles because they don’t have fur and cannot regulate their own body temperature. They must rely heavily on their environment to help keep them warm.

Because of this, they often choose to burrow underground to protect themselves from the harsh weather conditions.

If your turtle has been acting differently than usual lately, it may be experiencing a bout of hibernation.

If you notice that your turtle seems sluggish, stops eating, or just doesn’t seem to want to move around much, then you should probably check with your vet to see what could be causing this.

Another major reason why turtles like to dig a hole is that they use these holes to lay their eggs. After all, who wouldn’t love to be able to hide out in a cozy tunnel while laying their eggs?

Now, not every species of turtle digs holes to lay their eggs, but it does happen.

For example, female box turtles will usually dig a hole in which to lay their eggs. The male box turtle will then cover up the hole once she finishes laying her eggs. 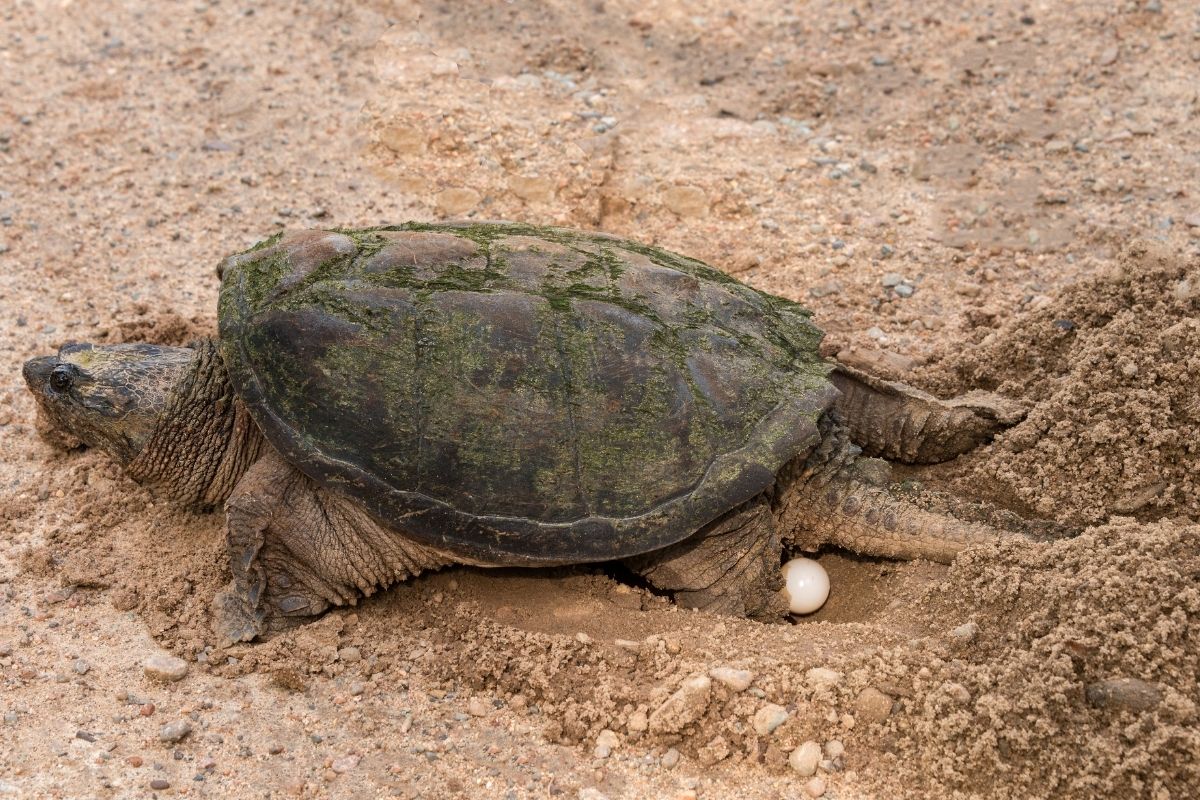 One of the most famous examples of this is the loggerhead sea turtle.

These turtles actually carry their eggs around until they hatch. Then, after hatching, the baby turtles will crawl out of the nest and swim away.

In addition to this, other types of turtles will also occasionally bury their eggs.

For instance, green sea turtles will sometimes bury their eggs in the sand. This way, they can easily find them later on.

Yet another reason why turtles like to make holes in the ground is that they use them as protection against predators.

Many different animals will try to eat turtles’ eggs, so it makes sense that they would want to protect them.

For example, raccoons will often raid turtle nests to steal the eggs.

So, if you’re having trouble finding your turtle’s nest, you might want to consider checking under rocks and logs near your home. Raccoons tend to frequent these areas quite frequently.

As another example, snakes will also prey on turtle eggs. However, they are much more likely to target the eggs of larger turtles.

Therefore, if you notice that your turtle is digging holes and keeping its eggs inside, it could mean that he’s trying to protect his nest from an approaching threat…such as a snake!

Reason 4: A Place To Hide From Predators

While many different animals will prey on turtles’ eggs, there are still plenty of predators that aren’t interested in eating turtle eggs at all. Some of these include birds, dogs, cats, and foxes.

Because of this, it’s very common for turtles to create a hiding place where they feel safe from these predators. 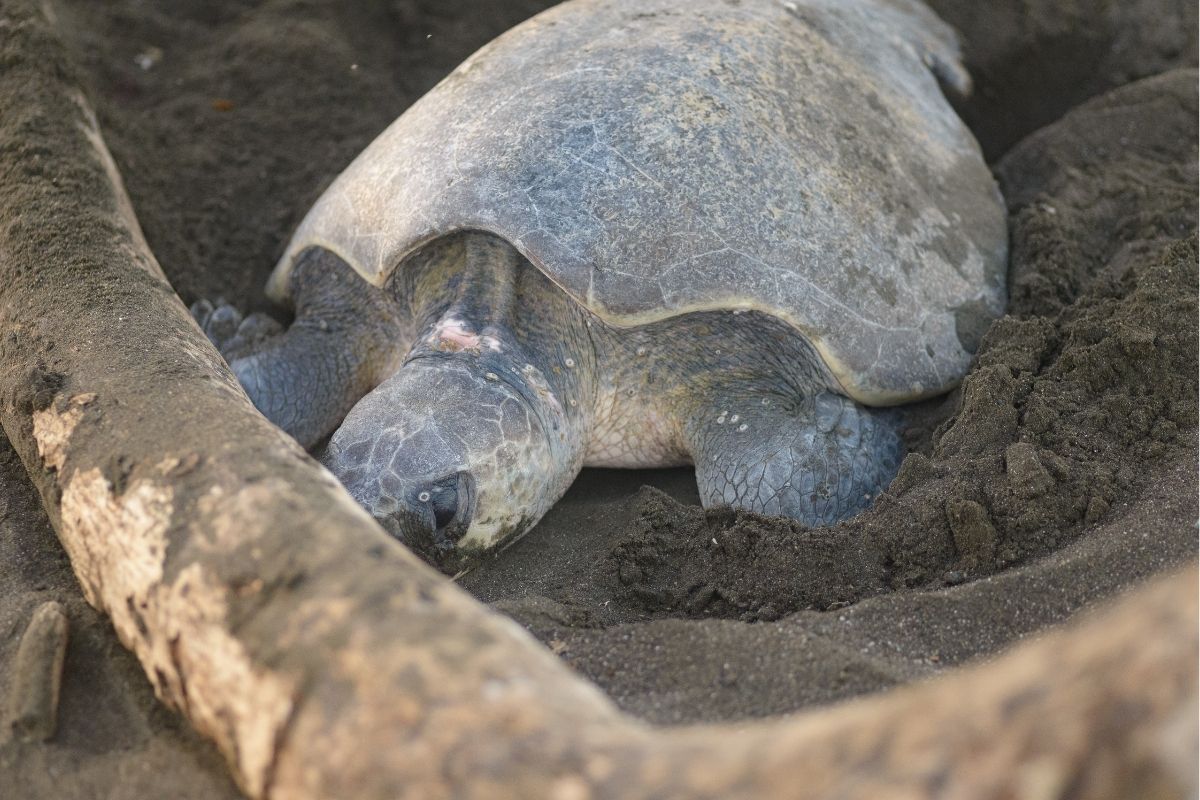 In fact, many times, turtles will build tunnels underneath their homes. This way, they won’t have to worry about being eaten by any predators that come along.

This behavior is typically seen the most in the wild, although it can also be seen in domesticated turtles.

Reason 5: To Hunt for Small Insects

Last but certainly not least, the final reason why a turtle might opt to dig holes is in order to hunt for small insects.

While this is not the most common way that turtles hunt, collect, and gather food – when food is short, many turtles will typically resort to hunting for small insects underneath the ground.

For this reason, turtles will usually begin to dig small holes in the ground in order to catch the insects hiding inside the earth.

There we have it! Digging holes is totally normal for a turtle to do.

But, now that we’ve gone over the five main reasons why turtles dig holes, hopefully, you now have a much better understanding of why they frequently like to do it.

So, if you are wondering why your turtle is digging a hole, it is probably due to one of the reasons above.