Are you wondering why dogs eat their puppies?

It’s not something extremely common, but it happens.

Having a newborn litter of puppies around you can be an exciting event.

These little fur balls are so tiny and adorable! But sadly, not all of them grow into adults.

There are many reasons why newborn puppies die, like respiratory problems, mastitis, circulation problems, infections, and other issues.

But sometimes, it’s the mother herself who kills her newborn puppies.

Let’s talk about this in more detail.

Let’s talk about cannibalism for a minute; get ready.

Cannibalism is when one animal eats another one that belongs to the same species.

Now, cannibalism is very rare when it comes to dogs. It’s even more uncommon in a litter birthed in an enclosed home environment compared to that of a loud kennel.

Puppy cannibalism may occur exactly at birth or maybe after a few days or weeks. It’s not specific to any breed; female dogs of pure or mixed breeds can eat their own puppies.

That being said, it may or may not be something that’s inherited.

Also, may or may not happen again from one litter to another.

So why do dogs eat their puppies? 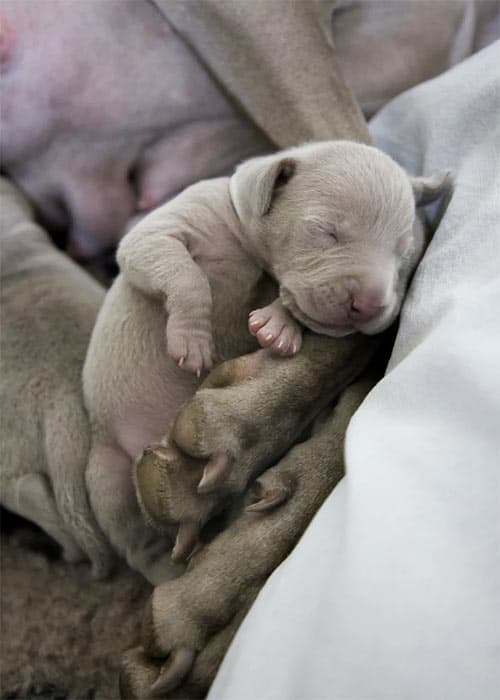 Let’s talk in detail about why dogs might eat their puppies.

It’s sad, but there are quite a few reasons something tragic happens.

Sometimes dogs need to have C-sections to have puppies; in the same way, humans may need a C-section to give birth.

Some experts believe dogs giving birth this way are less likely to recognize their little fur balls as their own since the mother’s body doesn’t release the hormones she should have while giving birth naturally.

So, what does it mean?

Well, since she doesn’t recognize the puppies as her own, their high-pitched noises and erratic movements can annoy her. She may not let them feed at all.

But, the worst part of all…

The erratic movements can activate her predator instinct, and she kills (and eats) these tiny, helpless babies.

But there’s another side to this cannibalistic story.

Sometimes, even after natural birth, the hormones kick in after a lag. But before they kick in, the mother can actually just kill off her entire litter.

This is especially true for inexperienced mothers. 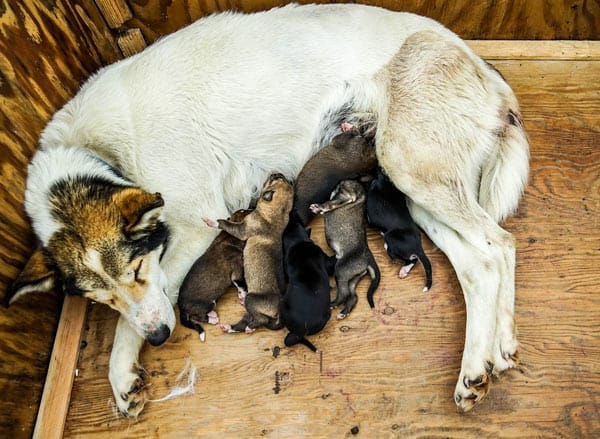 The mother can end up killing her litter if she’s really stressed.

Yes, you read that right.

And this stress can cause the deaths of innocent pups.

3. Putting Them Out of Their Misery

Sometimes you may scream murder without knowing the whole story.

Dogs sometimes kill the sick pups that have something wrong with them (which you might not be aware of), so they can focus all their energy on their healthy offspring.

You must be thinking this is cruel.

But this is nature, and I’ll explain why.

The sick puppy may attract predators and cost the mother the entire litter.

She might save the rest of the litter by mercy killing her own puppy. 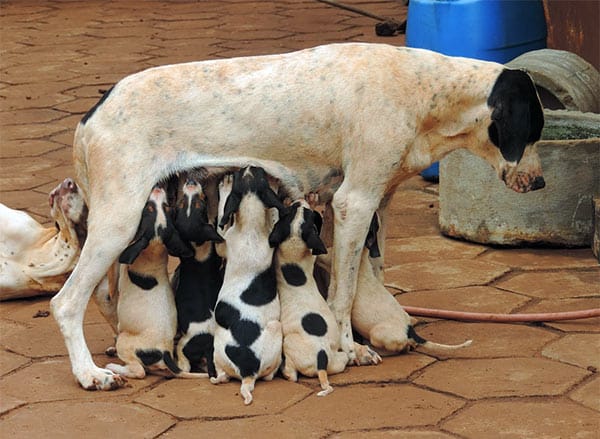 Another problem could be that the female dog was bred too young.

That’s exactly why no breeding should happen during the mother’s first heat.

Or else she may not be a stable mom ever.

In cases like this, the mother must be immediately spayed so that she isn’t allowed to have more puppies again.

It is natural for the mother to growl or snap at her puppies (the notorious ones that need some discipline!).

But it shouldn’t happen in week 1 when the puppies are totally defenseless and depend on their mom for everything.

A pup’s main source of nutrition is its mother’s milk.

Mastitis is an infection that makes nursing for the new mother very painful. In fact, the pain is so bad that the dog can actually reject her entire litter. 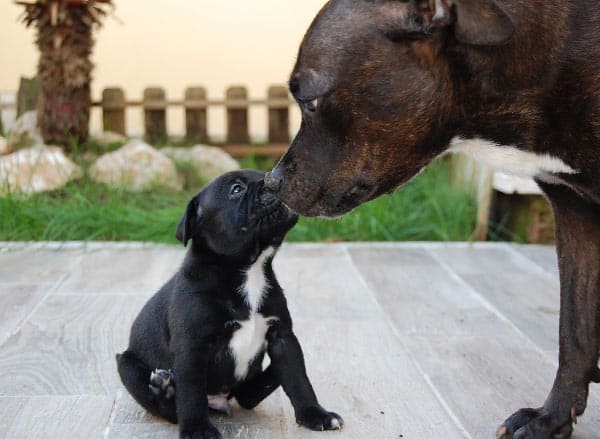 First off, unless you witnessed the mother killing the puppy, do not assume the worst.

Many other reasons could have led to the death of the pups.

Puppies spend a great amount of time sleeping during week 1 as they cuddle around with their mother.

During this week, the mom should be lively and interested in her fur balls.

She normally stimulates the little ones to, um, eliminate by licking on their tiny bottoms.

And it’s perfectly normal for her to ingest their waste.

● The ideal temperature must be about 85°F degrees during their first days. It should never be less than about 70°F.
Use a heat lamp or heating pad if it’s not around 85°F.
● Some puppies don’t nurse. You need to make sure that all of them must be fed.
● Newborns must sleep close to each other.
● If a puppy is acting odd, like staying away or isolated from others, crying, etc. This is a warning sign of something wrong.

There are several natural as well as medical issues that may have a hand in the pup’s demise.

There’s a thing called Puppy Fading Syndrome which can cause pups to pass away.

This can kill them up to the age of 9 weeks old.

You should keep an eye on the following:

When you notice anything that raises a red flag, you must immediately take your dog and the pups to the veterinarian!

What Can You Do to Prevent the Deaths?

To keep these fur-balls healthy and safe, you should watch the babies very closely during the critical period, i.e., their first few weeks of life, and make sure that the pups are acting and nursing normally.

You should also observe the mum’s interactions with her litter and look for any abnormal behaviors.

Another thing that’ll help would be you sleeping near the litter for a few days so that if you get to hear muffled cries, you’re there to rescue the baby.

Also, you should take the mum and the pups to go see a veterinary doctor about 24 hours after the birth so as to make sure that there aren’t any retained placentas.

Also, to ensure that the puppies are in good health.

Cannibalism in dogs is uncommon, but it doesn’t mean that it won’t happen.

The new mother usually eats her own puppy if she doesn’t recognize it as her own as a predatory instinct.

Don’t accuse the mom of killing her babies until you’re sure!

Here are a few reasons why it happens:

I hope that I was able to address your question.

If you still have a burning query, make sure to leave a comment, and I’ll always be happy to reply!

11 thoughts on “Why Do Dogs Eat Their Puppies? The Real Truth”