Turtles have a reputation of not being the most interesting animal as all they tend to do is sit there for hours without moving a muscle, and while this might be true, who is to say what is going on inside their head? 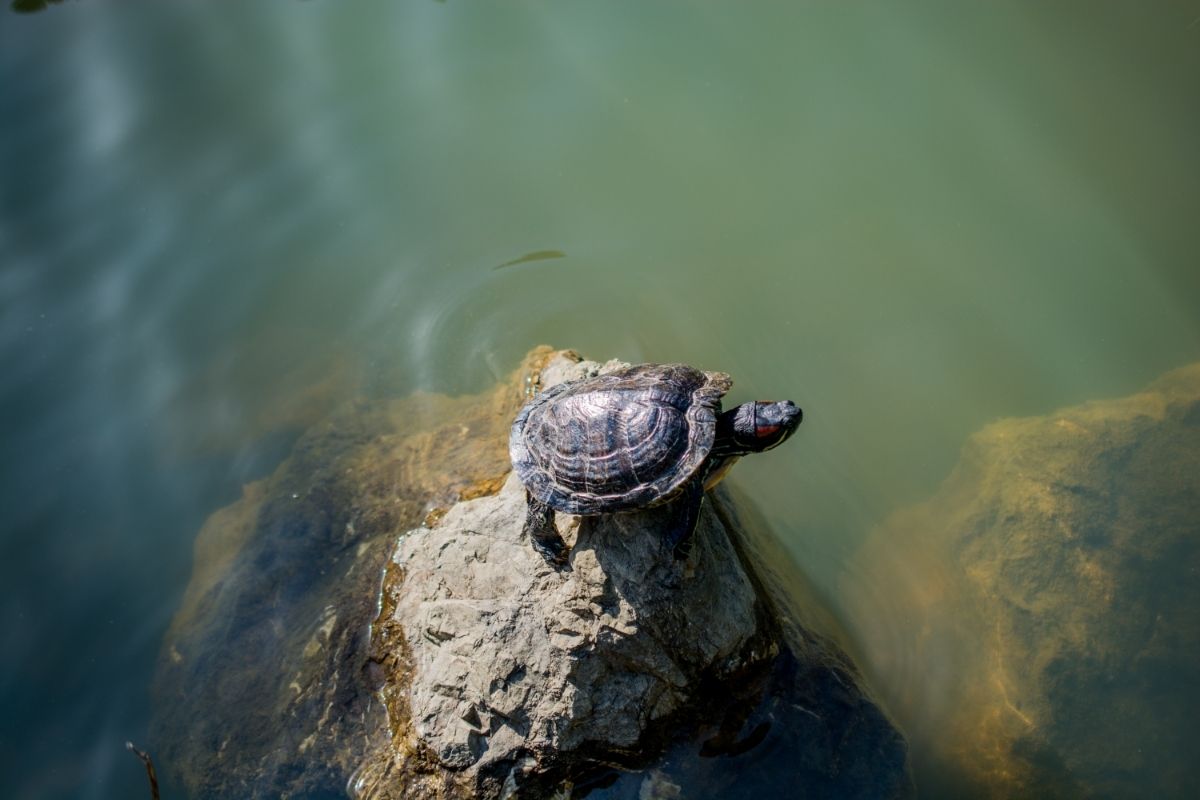 In this guide, we’ll be exploring whether, or not, turtles get lonely, depressed, bored, and lots more. So keep on reading.

Turtles Do Turtles Have Feelings?

Since emotions are such a big part of what it means to be human, we tend to project this onto animals as a way to better understand them.

However, turtles actually don’t really have feelings, not in the same way that we do anyway.

Turtles can feel if they are too hot or too cold if they are stressed, hungry, etc. but they do not have a wide range as we do.

This means that turtles are not able to form an attachment to us in a way that a dog would as turtles just see as vending machines more than anything else.

Even though they do not feel sadness, happiness, and anger, turtles will have emotions that will help them survive such as fear and stress.

They will experience fear when they are being attacked or stressed when they are in the wrong environment as it threatens their ability to survive and breed successful offspring.

This does not mean that they are apathetic to what goes on around them as they will fight with other turtles if there is more than one of them in a tank as they are fighting for food, mates, and survival. 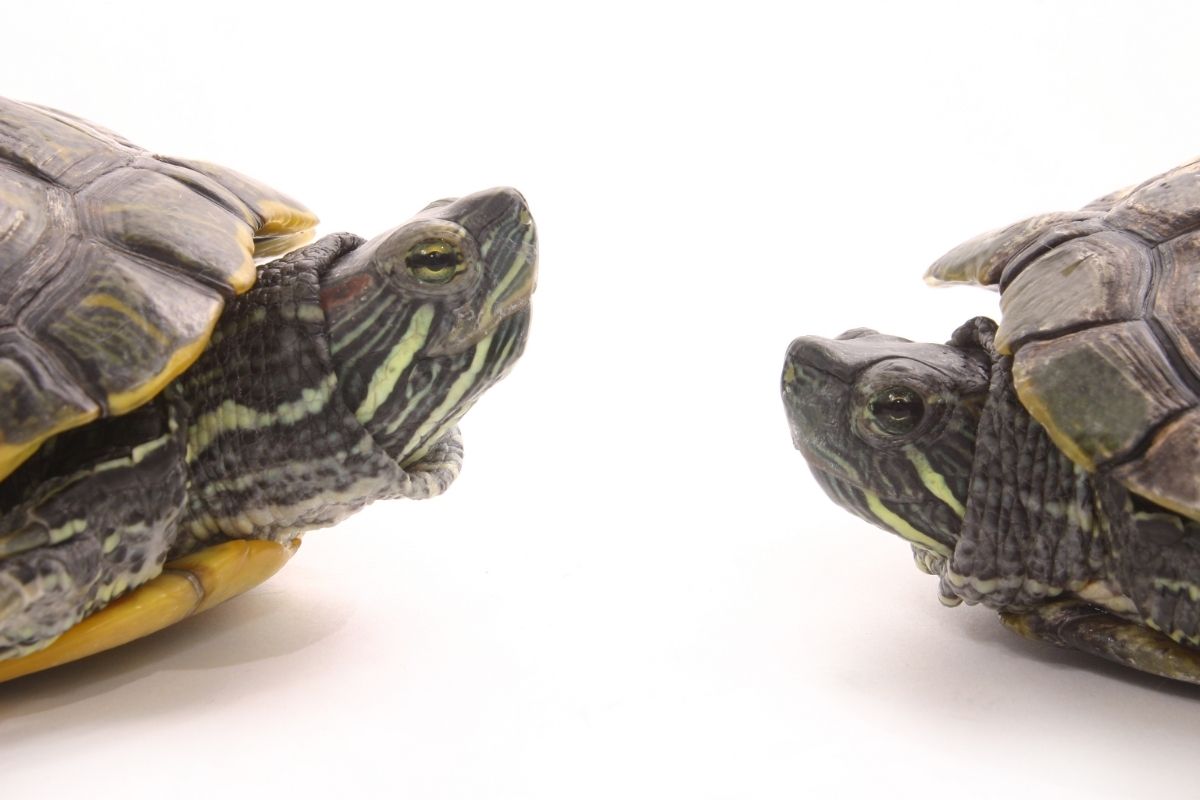 Interestingly, turtles may look pretty uneventful to us, but among the turtle species, they are able to communicate a lot with one another when they do come into contact with others.

This type of communication varies between different types of turtles, terrapins, and tortoises as they all have their own language and way of talking and interacting.

Even though they do not have ears, turtles are able to be verbal when making sounds through their mouth as they mate, but other than that, they usually communicate via touch and body language.

All turtles will use body language as the main way to communicate since they are unable to hear anything, but they will use their eyes as a way to look out for cues, stances, and body positions from other turtles.

To us, it might just look like two turtles staring at one another, but to them, they are in the middle of an intense argument.

As well as body language, turtles rely on touch to talk to one another like when a male turtle is touching a female turtle as a way to get a better understanding of them before attempting to mate.

A male will show interest in a mate by shaking its claws on her face and head. He might even bite her neck if she is not paying enough attention.

Do Turtles Get Lonely? 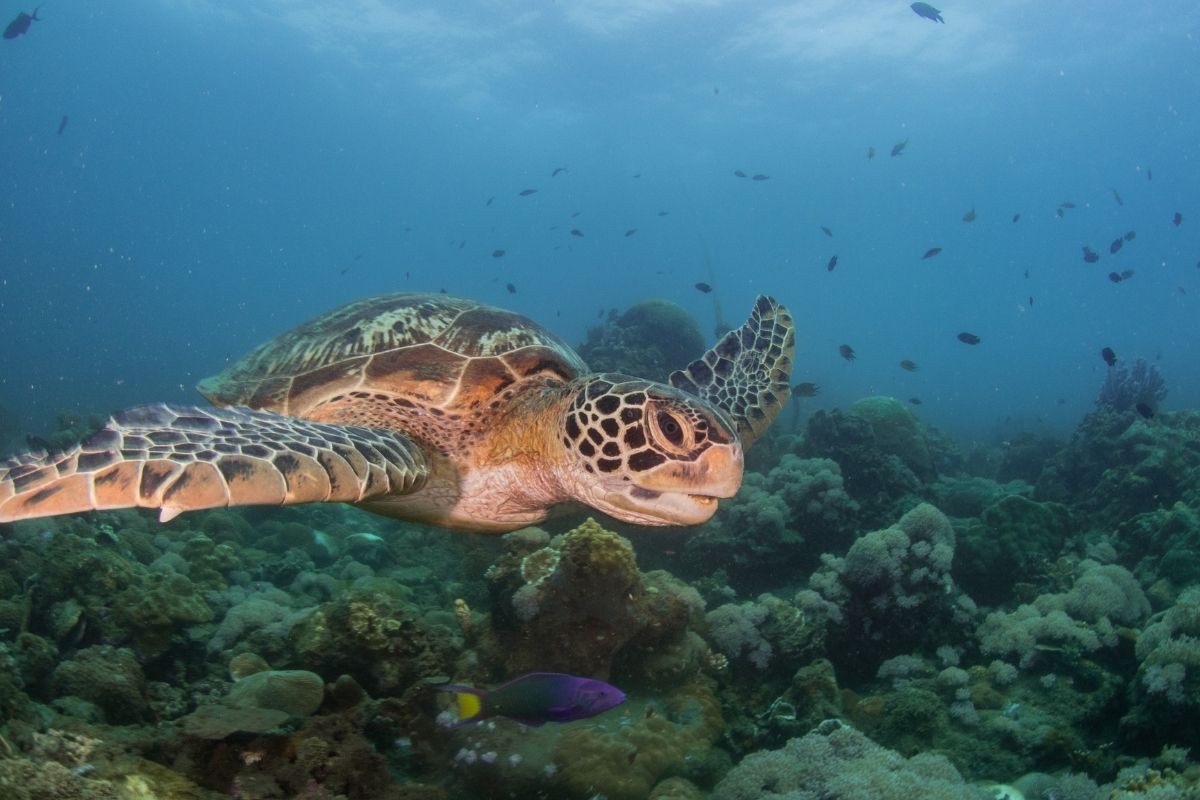 Even though turtles mate with others like all animals, they much prefer to stay by themselves and have no social needs, meaning that they do not get lonely.

They have thrived in their own company for thousands of years but still follow dominant hierarchical systems among other turtles during mating season which is when you will see a lot of frustration and aggression.

Do Turtles Get Bored?

Turtles may be pretty simple little creatures, but this does not mean that they do not get bored. Imagine how you would feel if you were put in a box with nothing to do, you would get bored too.

You may see your turtle trying to climb their tank or dig into the ground which can be signs that they are looking for something to do because they are bored.

To keep your turtle stimulated and give them a full life then there are ways that you can make their tank the most fun place ever (for a turtle).

You can begin with putting obstacles into their tank that they can crawl under, over, or through which will keep their environment exciting.

But make sure that you do not make it too hard for them to get around as this can be more stressful than fun for them.

Placing some of their favorite treats throughout their tank will encourage them to venture further through the obstacles until they are more confident in doing it themselves.

Sticks and plants are great for your turtle to interact with and hide under which mimics what their environment would’ve been like in the wild and will help keep them relaxed as they won’t feel exposed.

Empty shells are other fulfilling things you can add to keep your turtle from getting bored.

A pool of water in the tank will give your turtle the option to bathe and swim if they want, make sure that it is big enough for them to swim in it though without taking up the majority of space within the tank.

Changing the decorations in the tank every three to four months will also keep your turtle interested in what is going on around them.

It should not be changed too frequently though because it could throw your turtle off and stress them out.

Do Turtles Get Depressed?

Turtles can experience fear which can then evolve to stress which can then lead to depression because your turtle is in a constant state of ‘this is bad’.

Even a simple change in their environment can make some turtles depressed because of the stress that comes along with it.

This is why you should not change things around too often as it takes them a long time to understand and get used to things.

Another thing that can cause turtles to get depressed is if they are injured, ill, or have poor habitat and tank set up. You must always make sure that their tank is clean, well laid out, in the right size, and at the right temperature.

How to Keep Your Turtle Happy

Here are some other very helpful tips and tricks that you should know when owning a turtle so that you can make them as happy as possible which for them is simply feeling satisfied.

As we mentioned, turtles are solitary animals and should not be put in a tank with other turtles because this will lead to fear, stress, depression, and aggression.

Adding other reptiles to their tank even if they are not other turtles is still not the best idea either.

Your turtle will need a tank that is at least 20 gallons which allows for plenty of space for swimming and basking as it is vital for regulating their body temperature.

Setting up a little area especially for basking with a flat surface and heat lamp will be the perfect place for them to rest and decompress.

Turtles can be quite messy, so it is up to you to keep their habitat nice and clean because, in the wild, the turtle is not in a tank that encompasses their mess.

Clean both the tank and water frequently and do not use water straight from the tap as it has too much chlorine in it for your turtle to swim in so it must be dechlorinated beforehand.

In conclusion, turtles may not experience as many emotions as we do but they still feel basic emotions that help them stay alive such as stress, depression, aggression, and fear which are all essential for keeping them healthy and alive.

Even though that might all sound a bit simple to us humans who have more emotions than we know what to do with, it does not mean that turtles lack the ability to understand things.

When it is between turtles, the spectrum of communication is broad and in-depth, utilizing body language, positioning, touch, and more that we would not understand.