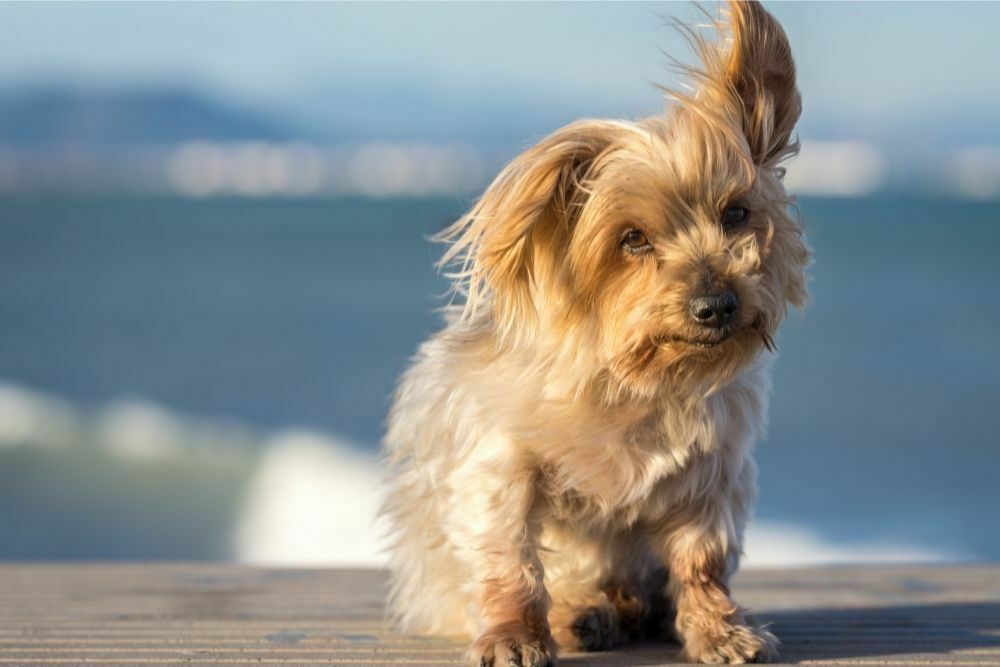 A dog’s ears have a life of their own sometimes, standing upright, flopping downwards, or even one up and one down. While these ear positions are adorably cute for owners to coo at, why does it happen? Is there a specific reason why your dog’s ears act the way they do or is it just a cute coincidence?

The true meaning for a dog has one ear up and one ear down is different for different dog breeds. Sometimes, a puppy will have one ear down until they age into adulthood and the ear gets strong enough to be able to stand up.

Other dogs might have one ear down simply due to an injury that they experienced in the past. Health conditions might be a similar reason for these ear positions. One of the more simple explanations as to why one ear is pointing up and the other is down is due to the fact that your dog is listening to something.

Today we will be exploring all about dog ears and why they move the way they do. Some might find this knowledge useless, but we think that it’s fascinating to learn more about our furry friends.

Are floppy ears a cause for concern?

No, don’t start worrying if your dog has floppy ears or only has one that stands up while the other remains down. There are plenty of dog breeds that have floppy ears that hardly stand up ever.

Floppy ears are a common trait of many dog breeds, including the ones listed below:

Since dogs are now all domesticated, they no longer need this survival instinct that allows them to have floppy ears. If your dog’s ears are down and relaxed, they feel safe and protected around you.

Are erect ears a cause for concern?

Nope, pricked ears shouldn’t be worried about either! There are plenty of breeds that have erect ears with both standing up throughout the entire day. This is simply a characteristic of their breed and shouldn’t be taken as a cause for concern.

Below are a few of the common breeds that will almost always have erect ears.

Dogs with pricked ears are commonly known for being hunting or guard dogs, meaning that they are always on high alert. This explains why owners of these breeds are always astounded when their dogs can hear guests or the postman before they can – they’re always listening.

What about one floppy ear and one erect ear?

There are no dog breeds that come with this characteristic, so your dog is not always only going to have one floppy ear and one erect. If you see your dog with only one ear pricked up, there is usually a reason for it.

Either they have experienced trauma that has made the ears act this way, or the dog is simply only lifting one ear rather than the other. 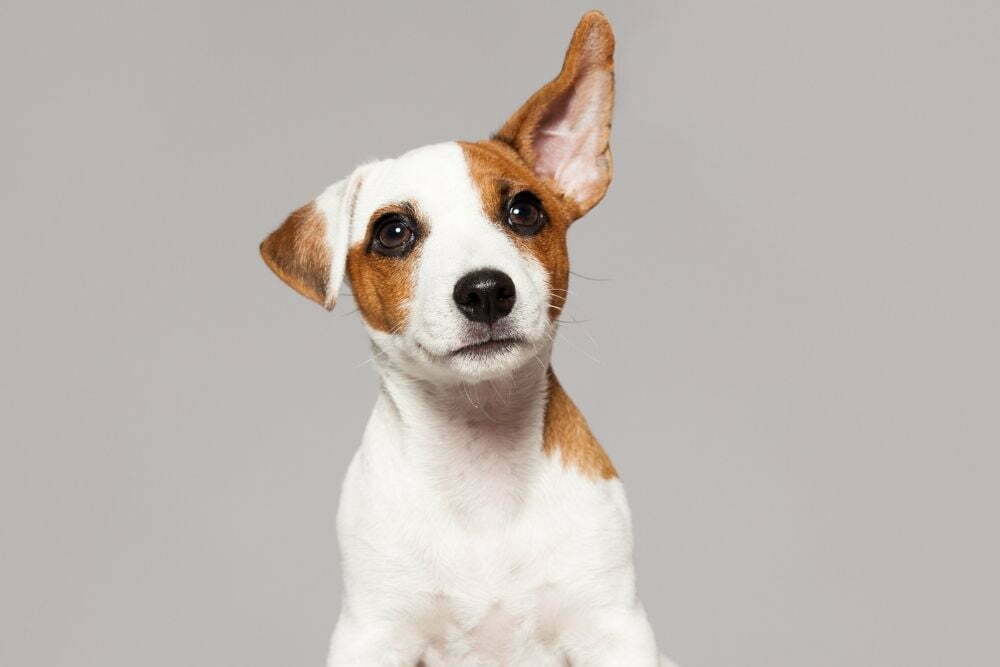 Why does my dog have one floppy ear and one pricked ear?

If you’re still wondering why your dog’s ears act the way they do, we’re going to list a few reasons why they’ll have one floppy and one pricked ear.

These aren’t the only reasons why this might happen, but they’re some of the most common reasons.

As puppies mature and grow up, their ears will get stronger and erect themselves in their own time. The cartilage in their ears needs to strengthen so that it can hold up the ears. As their two ears are independent, the cartilage in one of their ears can strengthen quicker and leave them with one pricked ear while the other is still floppy – this is normal!

Some dog breeds will have both their ears pricked and strong from just eight weeks old. Other breeds; however, might have to wait until they’re eight months old for their ears to be strong enough to stand up.

Most dog breeds will have their erect ears by the time that they finish teething. As dogs tend to swallow their baby teeth, it can be difficult for you to know when they start and finish teething. A good indication is when your puppy stops chewing everything excessively. Although, some dogs do just love to chew everything in sight.

Dog breeds with floppy ears will obviously not have to wait for their cartilage to strengthen as their ears won’t become erect. Again, this is perfectly normal.

They’re listening to things around you

Dogs love to listen to sounds around them to see whether they need to jump up to protect you or not. You might notice that when a dog hears something, they look very alert with both ears pricked up.

However, even when there is nothing to hear, they might only have one ear pricked. This is so that they can be the first to hear sounds to protect themselves, their house, and their family.

Curious dogs will almost always have one ear pricked to give them the best hearing at all times. Some commands will also make your dog lift only one ear as they aren’t as interested in listening to you as they are to noises outside. Sleepy dogs might also only lift one ear to preserve energy.

If your dog is old enough for their ears to be strong enough to stand up and you have seen them do it previously, you might become concerned when they have only one pricked instead of two. As we have said, there is often no cause for concern, but you should get them checked out at the vets just in case.

Some common health issues that could make your dog’s ear unable to stand up are as follows:

Injury to the ear

If your dog has been in a fight with another dog, there is a chance that the other dog could have bitten their ear.

The ear could have also been damaged if they ran past a stray stick too quickly or through a thorn bush. Check to see if there are any wounds on the ear. If there are wounds, take your dog to the vets so that they can treat your pet to prevent infections.

One common ear infection in dogs called otitis media, which is where bacteria gets into the ear and irritates it.

A side effect of this ear infection is your dog constantly shaking its head and a floppy ear. If the infection has spread to both ears, both will be floppy. Again, take them to the vet for treatment.

An ear hematoma is another word for saying that a blood vessel has burst in your dog’s ear, allowing the blood to freely flow between the cartilage and the skin. There are a number of causes that can create ear hematomas, such as a bitten ear, an infection, or too much scratching.

Ear mites are another common cause of ear hematomas, which are little parasites that live inside your dog’s ear. If your dog is shaking their head all the time and relentlessly scratching the ear, it could be an indication that they have an ear hematoma.

Occasionally your dog might get an abscess in its ear due to the buildup of dirt and hair within it. However, abscesses can also occur due to parasites, injuries to the ear, or an infection that wasn’t treated correctly.

Abscesses are never fun for humans or animals, and they can cause the ears to well and be very painful. Your dog will be scratching their ear quickly as if they are in pain, because they are, so get them to the vet immediately.

What should you do if your dog has one ear up and one ear down?

It’s important to not panic as soon as you see that your dog has one floppy ear because there are a number of reasons why this might be that don’t include health conditions. If your dog is no longer a puppy and has the ear strength to lift both ears up, then you can rule this cause out.

Remove all sounds and see whether you can hear anything that your dog is listening to. If someone is walking outside your house, they might be able to hear the steps and are getting ready to greet them.

If you’ve had your dog for a while, you might know what commands and treats get them excited with their ears pricked. Use these to see if they’ll prick their ears when playing or interested in what you have to offer.

If your dog is still not erecting their ears, and they’re not getting excited about things that they usually would be, you should take them to the vets. Your vet can give you peace of mind by either telling you that nothing is wrong or by prescribing the correct treatment for the health condition.

Ask the vet for advice on how to avoid this situation from happening again. They will help you to prevent the same health condition from coming back so that you don’t have to see your dog in pain. Once the treatment has finished, your dog’s ear should regain strength and prick up once more.

Overall, there is often no reason to worry when your dog has one ear up and one ear down. It could be due to their young age, sleepiness, or lack of interest. However, it could also be down to a health condition.

You should take your dog to the vets just in case if you’re worried and they’re showing other signs of an illness.