All You Need to Know About the Corgi Husky Mix!

A cross between the Siberian Husky and the Welsh Corgi resulted in the adorable corgi husky mix—a breed known to steal hearts!

This doggy is known for its small to medium-sized and good looks and is known to be a happy, naughty, mischievous, and eager-to-please doggy.

These dogs make amazing companions for those looking for an outgoing, social, and friendly dog who can live in smaller places.

The corgi husky mix has, in fact, got the best of both worlds.

These dogs do very well in adapting to weather conditions and need a lot of exercise to live a happy life.

I’ll try to make this an all-in-one guide!

So, without further ado, let’s begin, shall we?

The Genes Dictate It All: A Little About the Corgi Husky Mix’ Parents!

The corgi husky mix has won over a lot of hearts all over the world and one of the most popular mixed breed or designer dogs for the past 25 years.

As I mentioned in the introduction, this dog is a mix between two equally popular dog breeds:

Both of the parent breeds are known to be herding breeds and this small to medium-sized dog is known be a good herding dog and a great companion.

Let’s take a look at the parent breeds, shall we?

This small herding dogs finds its origins in Wales, England and is quite popular all over the world.

The dog comes in the following types:

Out of the two, the latter is more popular with the people and the former is relatively unpopular and had actually made an appearance in The Kennel Club list of native breeds that are vulnerable.

As a breed, the Welsh Corgi is known to be used as a herding dog for mainly cattle and sheep.

Corgis are known for their intelligence as well as their devotion toward their owners. They make amazing watchdogs and are wildly popular for their cute looks.

These dogs were loved by Queen Elizabeth II who owned several of them.

Originated in Siberia, Russia this medium-sized dog breed is one of the most popular ones in the modern day.

Known to be bred mainly by the hunting and gathering community of the Chukchi people, this herding dog was specifically bred to be able to withstand the harsh cold.

But there’s more that makes this dog great.

The Siberian Husky is popular for its good looks and comes in a lot of different marking and colors.

These dogs were tasked with pulling heavy weights on sleds in the harsh cold and cover vast distances which required them to have the necessary endurance and strength.

Siberian Huskies are pack animals that enjoy their time with other animals and a big family.

These active dogs are known to get destructive if they don’t find the right outlet for their energy. 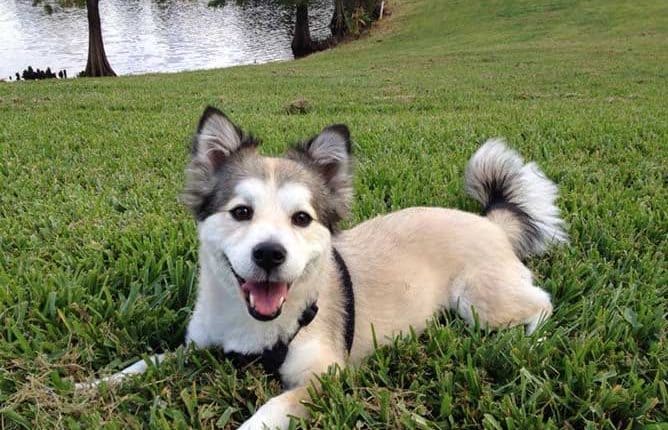 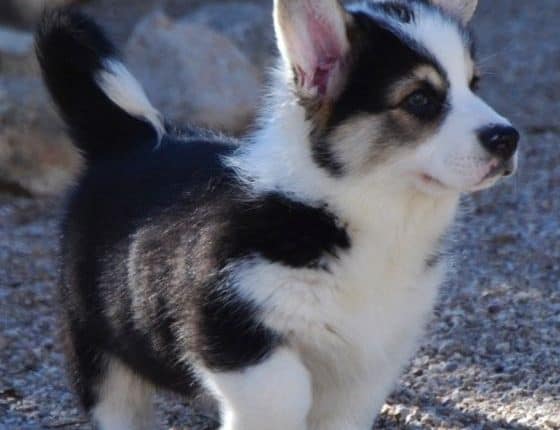 The World-Famous Killer Looks: A Little about The Corgi Husky Mix’s Appearance

Since the Horgi is a mixed breed dog, it is hard to predict which one of its parents it will take after—especially so if he’s a first generation mix meaning that it has one Siberian Husky for a parent and a Corgi for another.

So, it is always a gamble with designer dogs.

The Horgi is known to be on the smaller side of things when it comes to sizing—the dog is known to fall somewhere in the middle and may resemble a small Husky or a rather large Corgi.

It’s all in the dog’s genetic heritage!

The average height of a Horgi is about 14 inches but it can be as much as 18 inches as well. The ideal weight ranges between 20-25 pounds.

There’s one iconic thing, though.

The Horgi is known to inherit the Corgi’s legs and the Husky’s face—making him look like a puppy Husky!

However, the looks of the Horgi have sometimes been compared to that of the German Shepherd.

Other than that, this dog has a rounded head, a curled tail, and his ears are known to be upright when he’s alert.

The Corgi Husky Mix is known to have a straight medium-length coat which is resistant to water.

The coat can be inherited from either of the parents or may even be a mix of the two.

You can find the Corgi Husky Mix in several colors:

And it is not mandatory for all the pups belonging to the same litter to have a similar-colored coat!

The Personality Matters As Well: All about the Temperament!

The Horgi is known for its sweet temperament and is known to be an easy going doggy friend who enjoys your company, love, and affection.

In this section of the blog, I would like to share with you a few facts about the personality the Corgi Husky Mix has.

However, there’s one thing I would like you to know.

The thing with designer dogs is that you really can’t predict their personality and temperamental traits as they’re a mix of two different breeds.

So, this means that you need to take what I’m sharing with a grain of salt.

With that being out of the way, let’s talk about the personality!

Following are the temperamental traits of the Corgi Husky Mix:

This dog is known to be friendly but not over-friendly.

They do well with new people and are friendly. The thing to note is that these dogs are trusting but not over-trusting.

These dogs are social creatures and love to entertain people and kids.

They do really well with other animals and love to be the center of attention.

Gets along with the family

This is a trait that the Corgi Husky mix gets from both of its parents.

The dog simply loves to be around a lot of people and animals as he’s a pack animal.

This dog also does really with young families if trained well.

Always on an alert

The Corgi Husky Mix is known to always be on alert and makes for a really good guard dog—and is not even an excessive barker if trained correctly!

The Corgi Husky Mix is as loyal as they come and puts his owner before himself.

The dog will never disappoint and would do anything for you.

Both the Welsh Corgi and the Siberian Husky are known to be intelligent breeds and this trait is also inherited by the Corgi Husky Mix.

This breed catches onto things rather easily and training them is extremely simple.

These dogs have an eager personality and are always up for new adventures.

They’re also eager to please their masters as they love their cuddle time.

The Corgi Husky MIx is known to love his owner and care for him deeply which makes him an amazing companion who also fulfills one’s emotional needs.

Don’t you agree that the Corgi Husky Mix has a killer personality? Let me know your thoughts in the comments section…

To Eat or To Not Eat: The Nutritional Needs

The Horgi has a really healthy appetite but, is also known to gain a lot of weight if fed freely and allowed to eat more calories than required.

And so, it is important for you to keep an eye on the dog’s daily caloric intake.

Since the Corgi Husky Mix is a designer breed, the recommended daily caloric intake depends on the dog’s size so, I recommend that you consult your vet to figure out how many calories you should feed your dog.

The vet will be able to make the right estimation keeping the dog’s size, activity level, and ideal weight range in mind.

This’ll make sure that you aren’t underfeeding or overfeeding your doggy friend.

You need to factor in the treats you give your dog as well—everything counts. Ideally, you should follow this split:

I would say that common items in your kitchen such as olives, tuna, and sunflower seeds make good treats for the dog.

As for the dog food, you can find a brand that’s good for small to medium dogs. My recommendations for the Corgi Husky Mix include:

The Maintenance Needs of the Corgi Husky Mix

It is not a secret that every dog has maintenance needs.

These include the grooming needs as well as the exercise needs of the dog among other things.

In this section, I’ll go through the Corgi’s grooming as well as his exercise and activity needs.

Let’s take a peek, shall we?

The Corgi Husky Mix is a moderately active dog and needs to be taken on at least one walk per day to keep him happy and healthy.

This doggy is known to become cranky if his activity needs aren’t met and may even behave poorly.

The Corgi Husky Mix does best when he’s left off leash and so, needs to have total recall and trained well.

The dog does really well in dog parks and when he’s allowed to play with other dogs.

You should also make it a point to regularly play games such as fetch, frisbee, etc. with the Corgi Husky Mix.

One thing you must know is that the Corgi Husky Mix is not hypoallergenic as both of its parents are known to be shedders.

And so, the Horgi is known to shed throughout the year.

So, I recommend that you invest in a good brush as well as a best vacuum for pet hair.

The dog needs to be brushed at least once a day as regular brushing helps with shedding.

Following are the brushes that I recommend:

You also need to bathe the Corgi Husky Mix on a regular basis using a good dog shampoo as well as a conditioner to keep the coat shiny, soft, and healthy.

Since the Horgi’s coat is resistant to water, bathing him will be a task of its own as you’ll have to put a lot of effort in to lather the soap.

It will take a long time for you to dry your Corgi Husky Mix due to his thick coat.

You will also need to wipe your dog’s ears clean at a minimum of once a day with a moist cotton ball.

You should also make it a point to grind your doggy’s nails or trim them on a regular basis as long nails make it uncomfortable for your dog to walk and may even hurt your doggy friend.

The Corgi Husky Mix is a cute, friendly, and loving dog that makes a perfect companion for humans.

This dog does really well with families, other pets as well as children.

The small to medium-sized dog is known to be mischievous and naughty and does well in small homes and apartments.

However, the dog is known to shed throughout the year and has moderate to high grooming needs.

The Corgi Husky Mix is a fairly active dog and needs to be taken on at least one walk a day.

This good looking dog is an excellent companion, a trusted friend, and an alert guard dog.

What are your thoughts on the Corgi Husky Mix? Share them with us in the comments section! We’d love to hear your opinion…

Do you have any unanswered questions? Share them with us in the comments section and we’ll get back to you as soon as possible.

Do Puggles Bark a Lot? What You Need to Know

Everything You Need to Know About the Teacup Pomeranian Dog Breed!

Everything You Need to Know About The Doberman Lab Mix

Do Puggles Bark a Lot? What You Need to Know

Everything You Need to Know About the Teacup Pomeranian Dog…