Bears are one of the most adorable animals out there. They’re big, furry, and cuddly (though we would advise not trying to actually cuddle them as you could end up as a bear snack!) 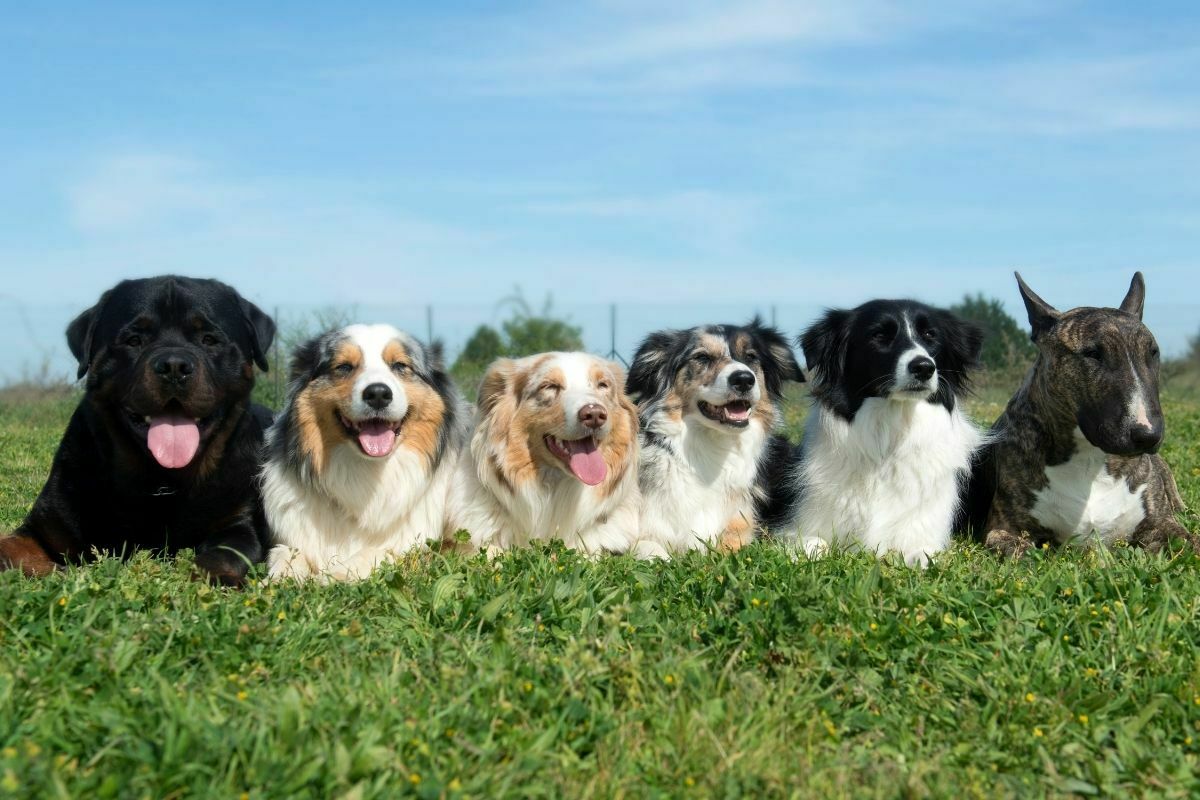 There are a surprising amount of dog breeds that take on the traits and looks of bears, especially larger dogs with thick, furry coats.

With this in mind, we have rounded up 15+ dog breeds that look like bears, in case you are thinking of getting a dog that has a similar look to a bear.

Some of these dogs are known for having certain similarities to the bear in their appearance, while others have a much stronger resemblance to a bear. 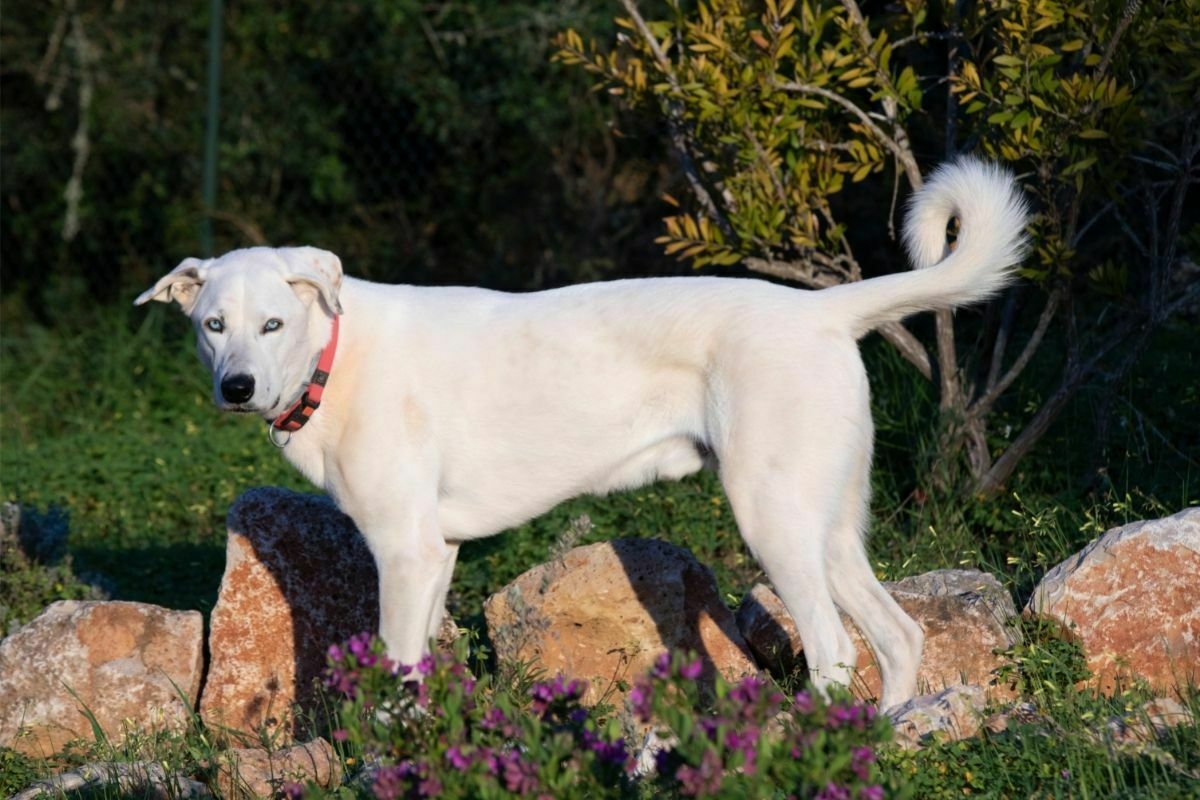 The Estrela is a Portuguese breed of hunting dog. They are large dogs with long legs, a thick coat, and a bushy tail. Their name translates to “star” in English.

Their coats can be black or brown, though they come in other colors too. Their size, thick body shape, and large muzzle are what give them an extremely strong resemblance to a bear! 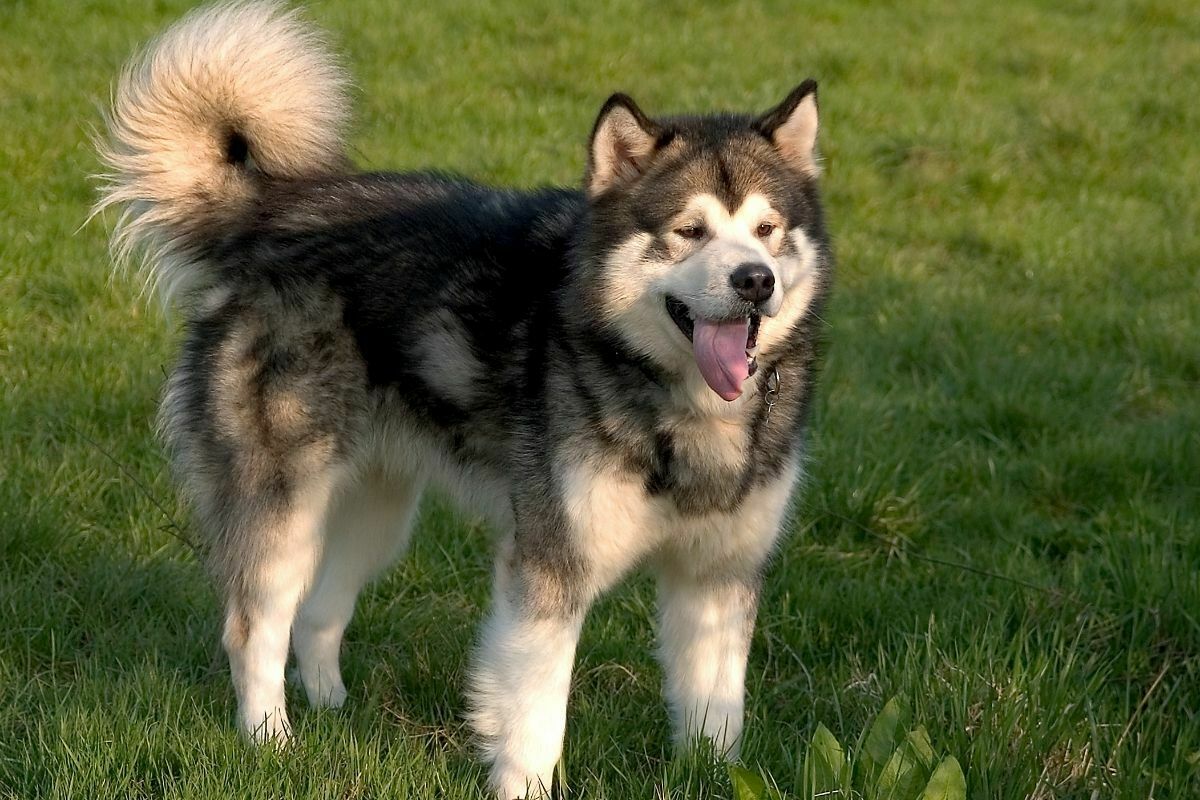 Alaskan Malamutes were originally bred to hunt wolves and other wild animals. Today, they’re used for hunting and pulling sleds.

They’re also well known for being great family pets – so long as they have enough space and are able to get in a lot of exercises – as they are very gentle giants.

This breed’s thick fur makes it easy for them to stay warm during cold weather. As such, they tend to get heavier over time.

Their large nature- in terms of their leg length and muzzle size- gives them a similar look to a bear, particularly a polar bear with whom they share a connection as both are associated with the colder parts of the world.

The Bernese Mountain dog is a working dog and is often used for herding sheep and cattle. The breed originally came from Switzerland to help herd livestock, with its name coming from its Swiss origins.

Their coats are short and dense, giving them a shaggy appearance. Their thick coats make them ideal for cooler climates, where they can keep themselves warm.

They are highly intelligent and trainable, making them perfect companions for families. Their long legs and huge paws give them a bear-like appearance. 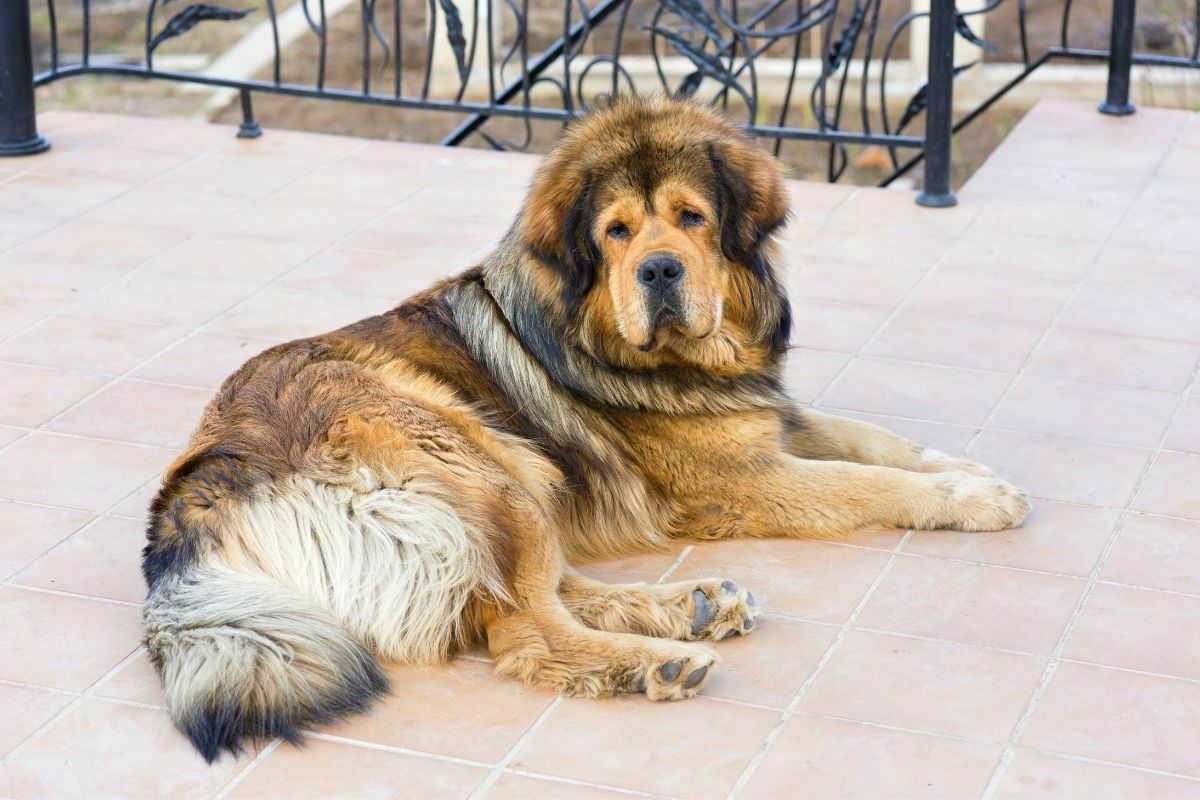 Tibetan Mastiffs are large, powerful dogs from Tibet. They are known for being incredibly devoted to their owners and guarding them fiercely.

They are excellent at protecting their homes and families. Their coats are dark brown and white, which gives them a shaggy look.

The coloration of their hair helps protect them from snowstorms. Their heads are covered in a heavy beard, which adds to their bear-like appearance, whilst their giant paws help them move quickly through deep snow.

Anatolian Shepherds are working dogs that originated in Turkey. They’re usually kept by farmers and ranchers to herd livestock and protect property.

They’re very smart and trainable, making for good guard dogs. Their coats vary in color depending on the region of origin. In some areas, they have a lighter colored coat than others.

Anatolians are often compared to bears due to their massive size and powerful build as well as their thick double coat- which protects them from harsh weather conditions- and their big feet and ears, all of which add to their bear-like look. 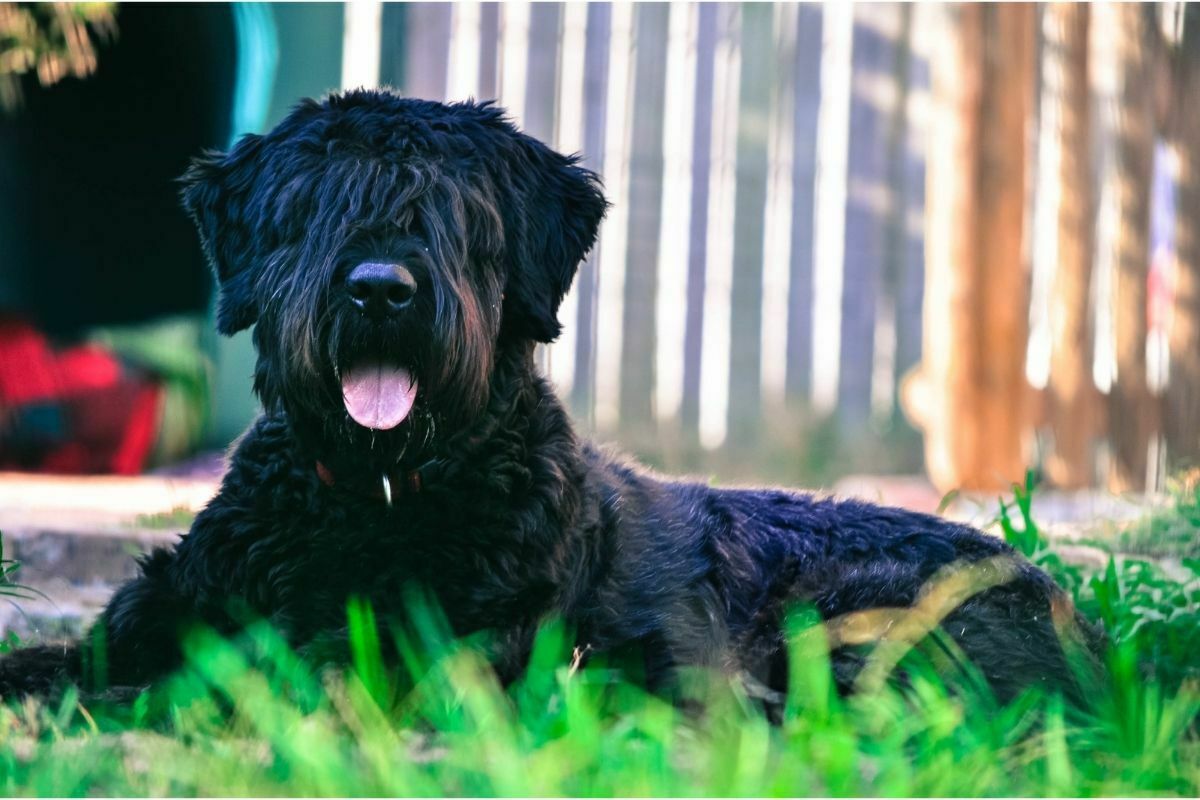 The Bouvier des Flandres breed originated in France during the Middle Ages and is known for its gentle and friendly nature. They’re especially popular among children because of their cuddly looks and their curly coats.

Their tails are long and bushy, giving them a playful appearance. Their oversized muzzles and long legs are also reminiscent of bears. 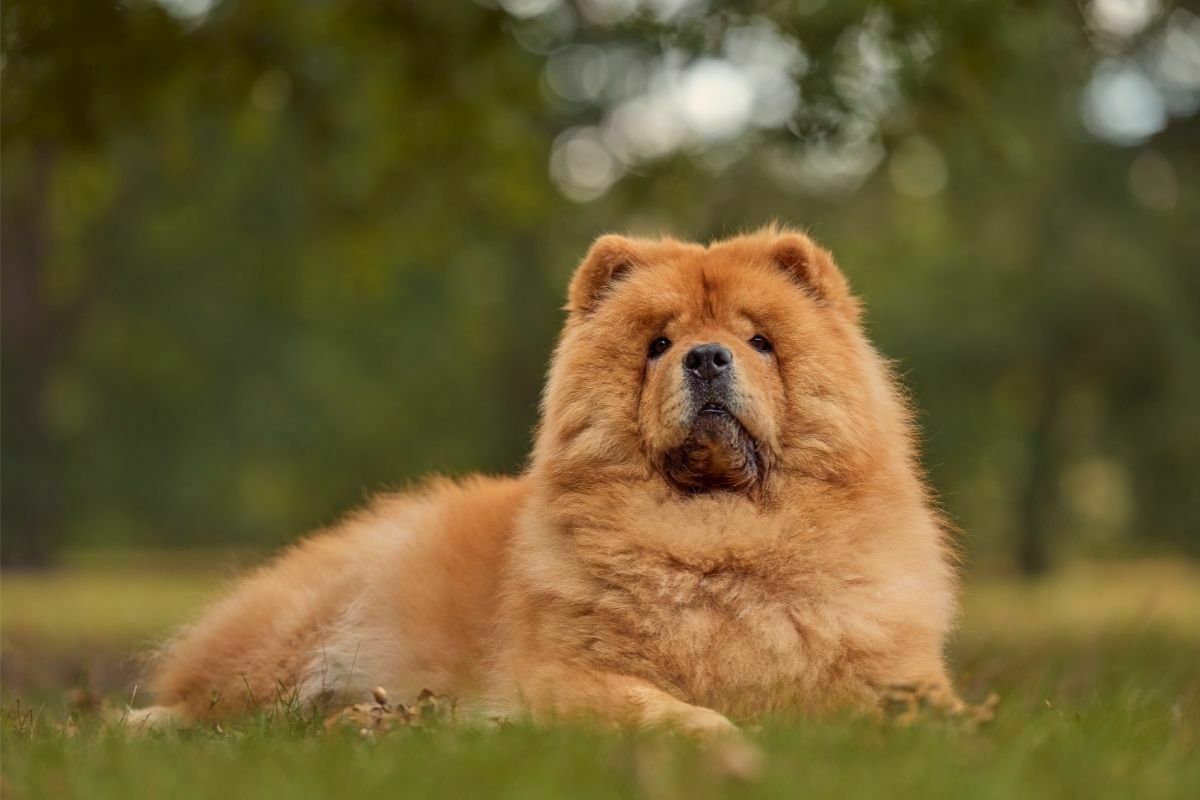 Chow Chows are one of the most ancient breeds of dogs, originating from China and Southeast Asia.  Chow Chows love attention and make for great companions, as they are affectionate towards their owners and enjoy spending quality time with them.

Their coats are medium-length and silky, adding to their appealing appearance. Their heads are rounded and wide, giving them a bear-like look. Their eyes are small and round, which is why they often appear to be sleepy or lazy.

Their long, muscular bodies and sturdy legs give them an imposing presence. Their fluffy nature adds to their unique look, but it is their size- with long legs and thick paws- that gives them a bear-like appearance.

Siberian Huskies are famous for being versatile and hardworking. They originated in Siberia and Russia and have been kept for a wide range of reasons, from acting as sled dogs, to guide dogs and family pets.

They’re very active and energetic, making them great for hiking and camping trips.

Their coats are short, dense, and curly, giving them a shaggier appearance. Their eyes are set far back on their head, which makes them appear more bear-like than other dogs. Their paws are huge and webbed, helping them navigate snowy terrain. 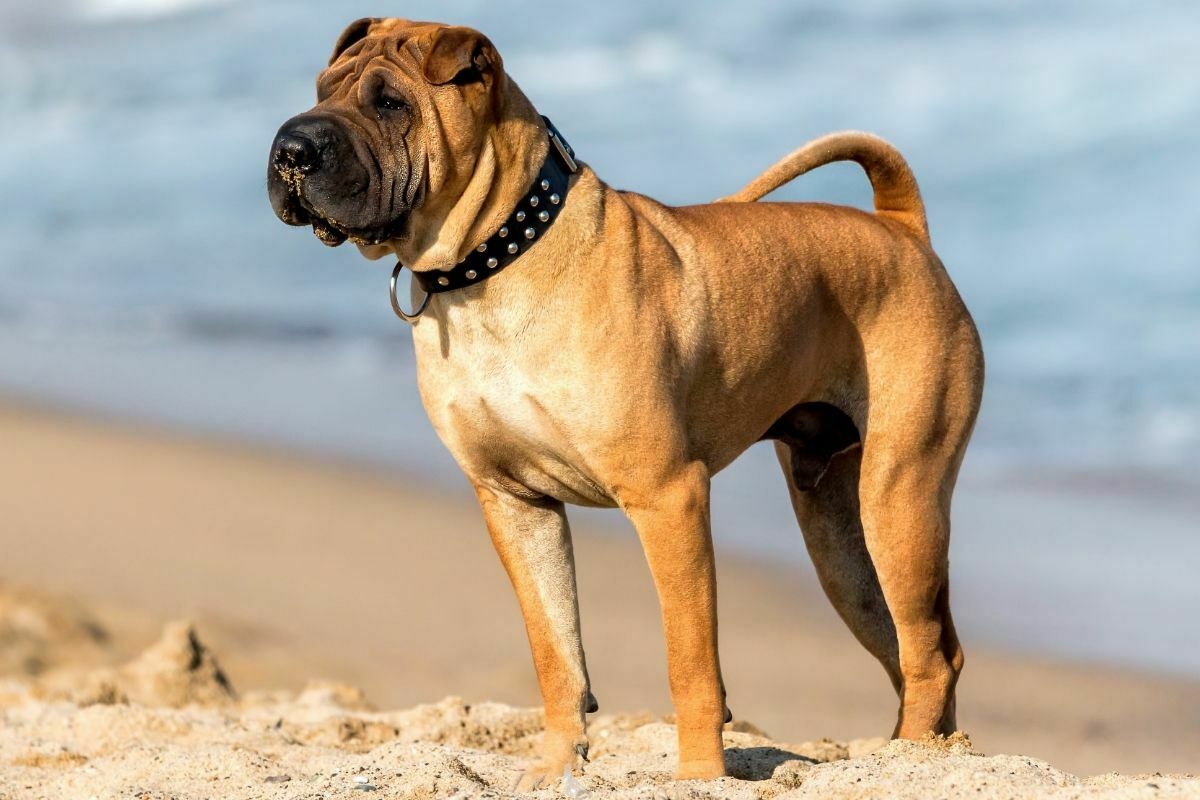 Shar-Peis are a breed of dog originating in China. They’re known for having unique personalities and looks, with lots of wrinkles that make them look a bit grumpy!

They’re very friendly and loving towards humans, making them perfect family companions. Furthermore, they are highly intelligent and trainable, so they make excellent therapy dogs too.

They’re also very agile and athletic and will need to have a lot of space in order to get the appropriate amount of exercise.

Their coats are short and smooth, adding to their exotic look. Their large heads and rounded bodies resemble those of a bear, as do their triangular and pointed ears.

Karelian Bear Dogs were originally bred to hunt wolves in Northern Europe and are still used for this purpose today. They’re extremely loyal and protective towards their families, as well as being very brave and fearless, making them ideal service dogs.

They are incredibly intelligent too, making them easy to train. They have a heavy fur coat that’s longer than most other dogs, and their large paws help them walk easily in deep snow. Their black noses and dark brown eyes give them a bear-like appearance. 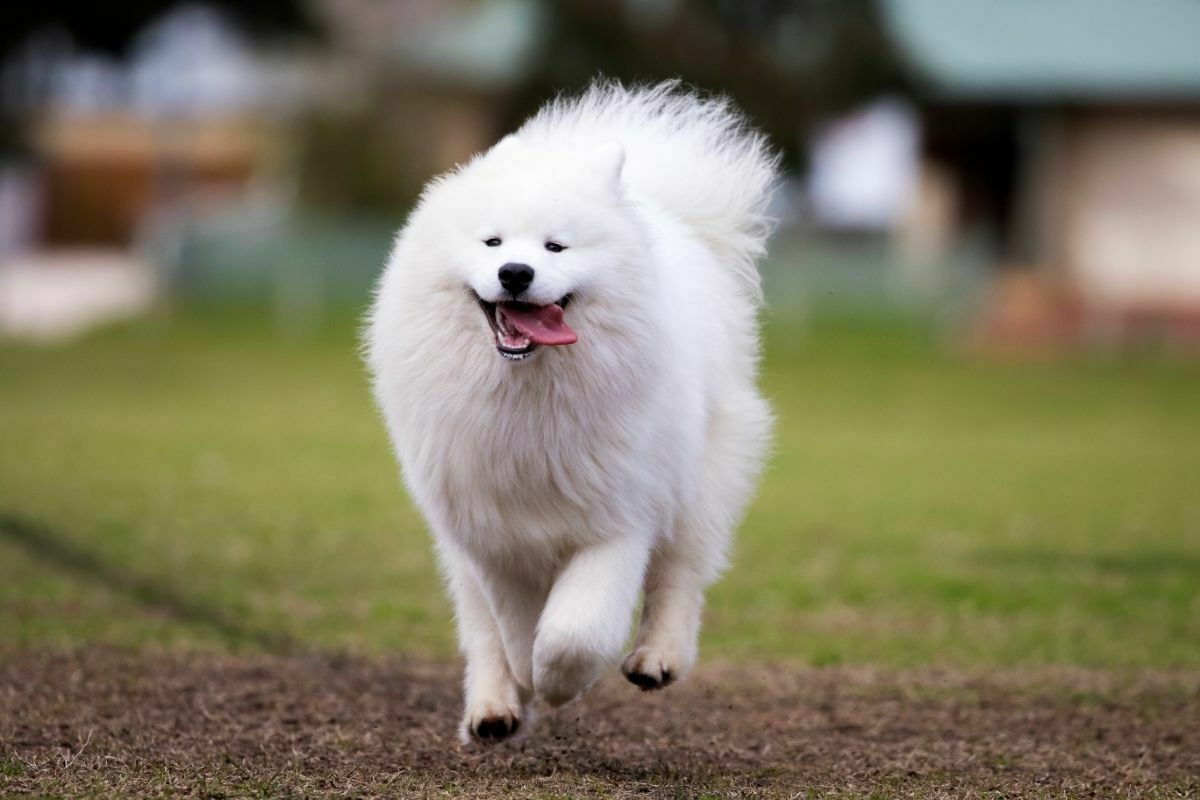 Samoyed is a rare breed of domesticated dog originating in Russia. They’re known for their intelligence, loyalty, and friendliness and are well suited for working in cold climates. They’re also good swimmers and climbers, making them ideal rescue dogs.

Samoyeds are super playful and affectionate, making them wonderful pets. Their coats are short to medium length, giving them a shaggy appearance.

Their long legs and drooping ears add to their bear-like appearance, whilst their heads are round and wide, resembling those of a wolf. 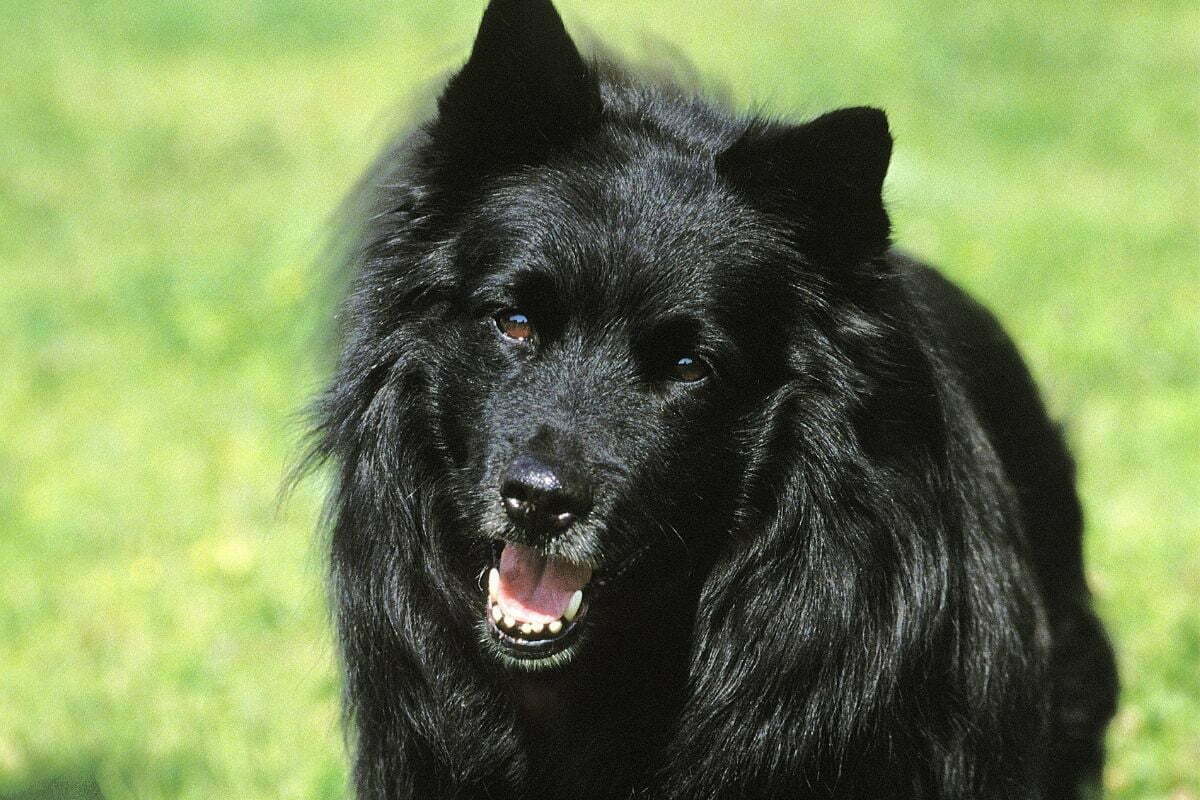 Swedish Lapphunds are a rare breed of hunting dog originating in Sweden and are known for being very smart and fast learners.

They’re also very energetic and active, making them great for running with and playing. Their loyalty and devotion make them ideal companion animals.

Their coats are short with a slight undercoat, giving them a cute and cuddly unkempt appearance. Their tails are bushy and thick too, all of which combine to create an almost bear-like appearance. 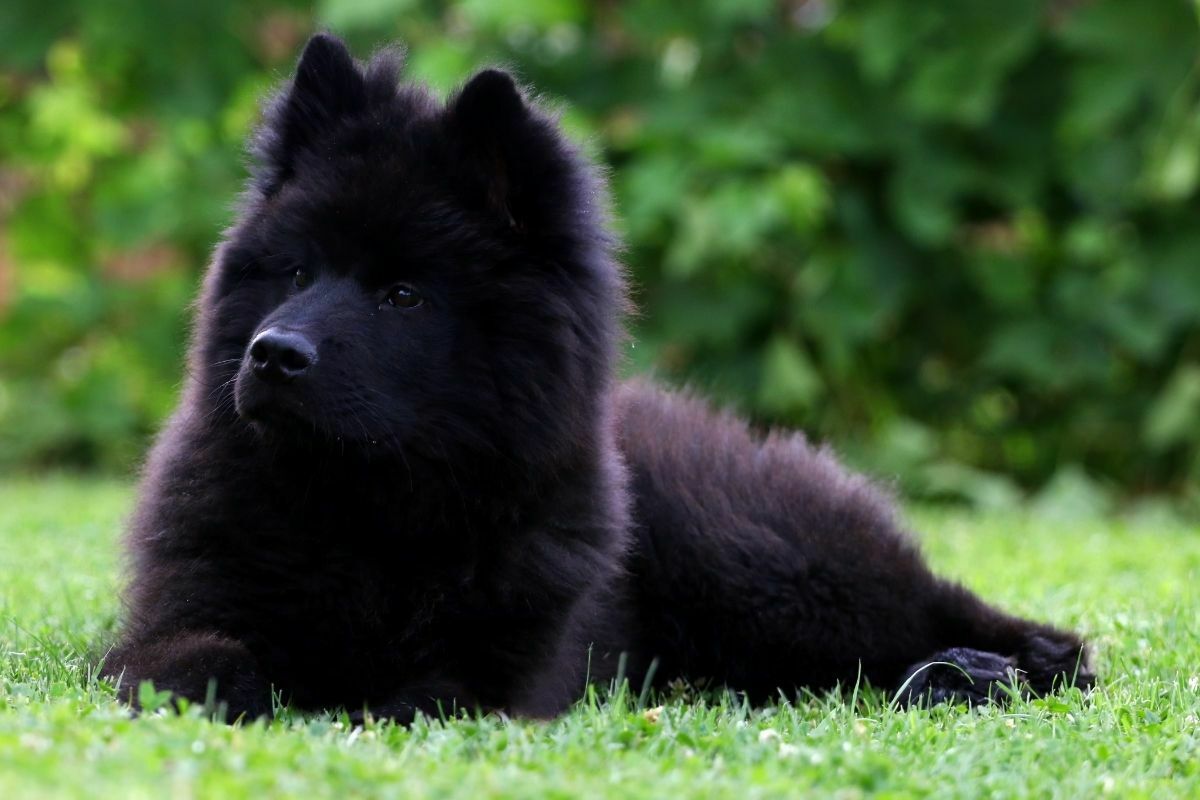 Eurasiers are a rare breed of mixed-breed dog originating in Germany with a friendly, playful, and independent nature. They can be stubborn at times, but they’re generally easy going.

They’re very clever and trainable, and incredibly active, needing a lot of room when they become family pets. 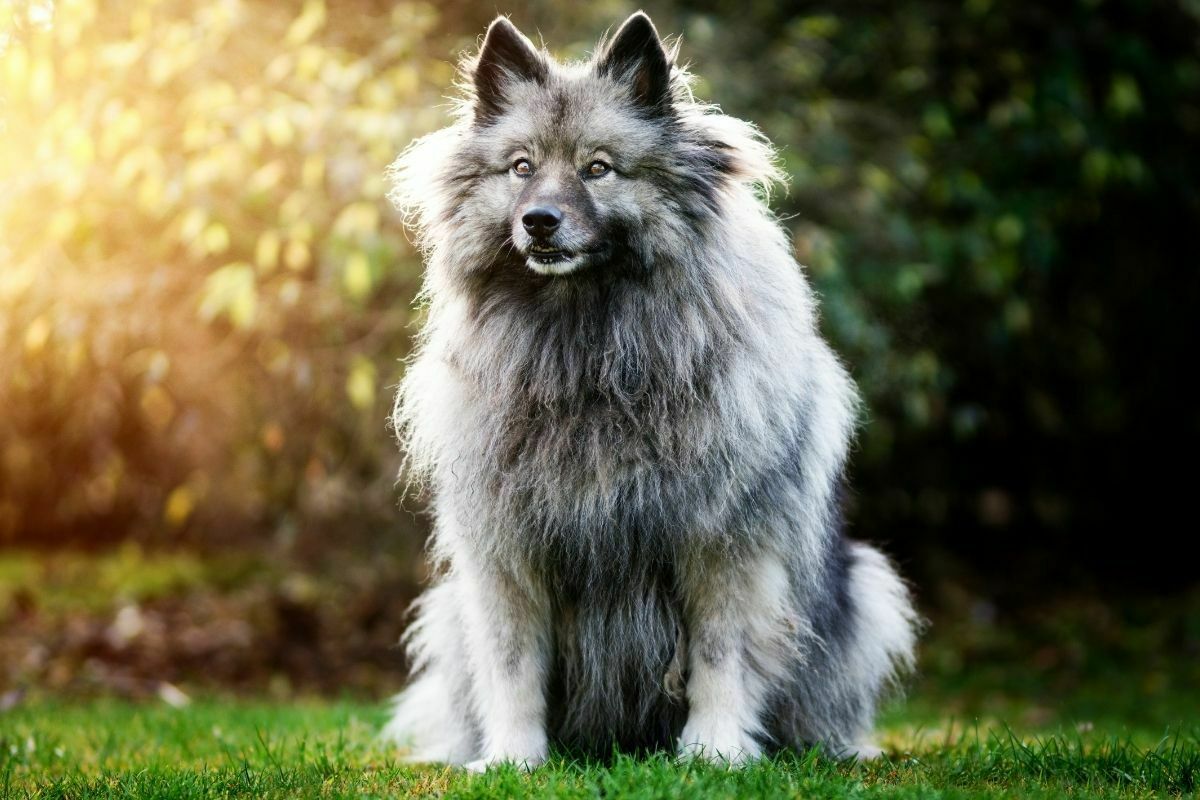 The Keeshond is a rare breed of dog that originated in the Netherlands. They’re known for possessing a strong will and being fiercely loyal, making them ideal guard dogs. They’re also very courageous and protective of their owners, making them excellent family pets.

Their coats vary from light to dark shades, depending on the color of the individual. Their coats are short, dense, and wiry, giving them a shaggy appearance.

Their heads are rounded and wide, whilst their ears are set low on their head, giving them a more bear-like appearance. 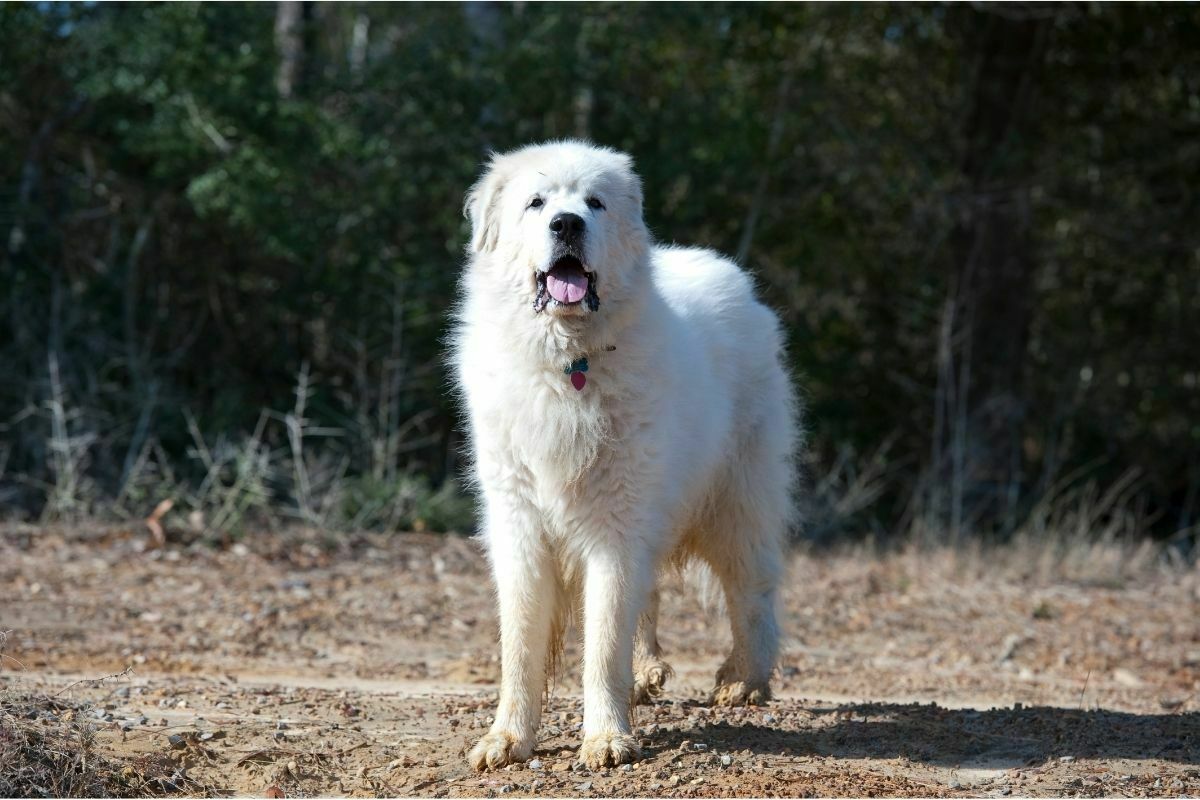 The Great Pyrenees are a rare breed of dog from France with a sweet and gentle temperament. They’re very loving and affectionate, making for great companions.

The Great Pyrenees’ coats are long and silky, giving them a luxurious appearance. Their heads are large, round, and wedge-shaped, which is what gives them their bearlike appearance.

Their ears are pendulous and hang down, also giving them a bearish appearance. 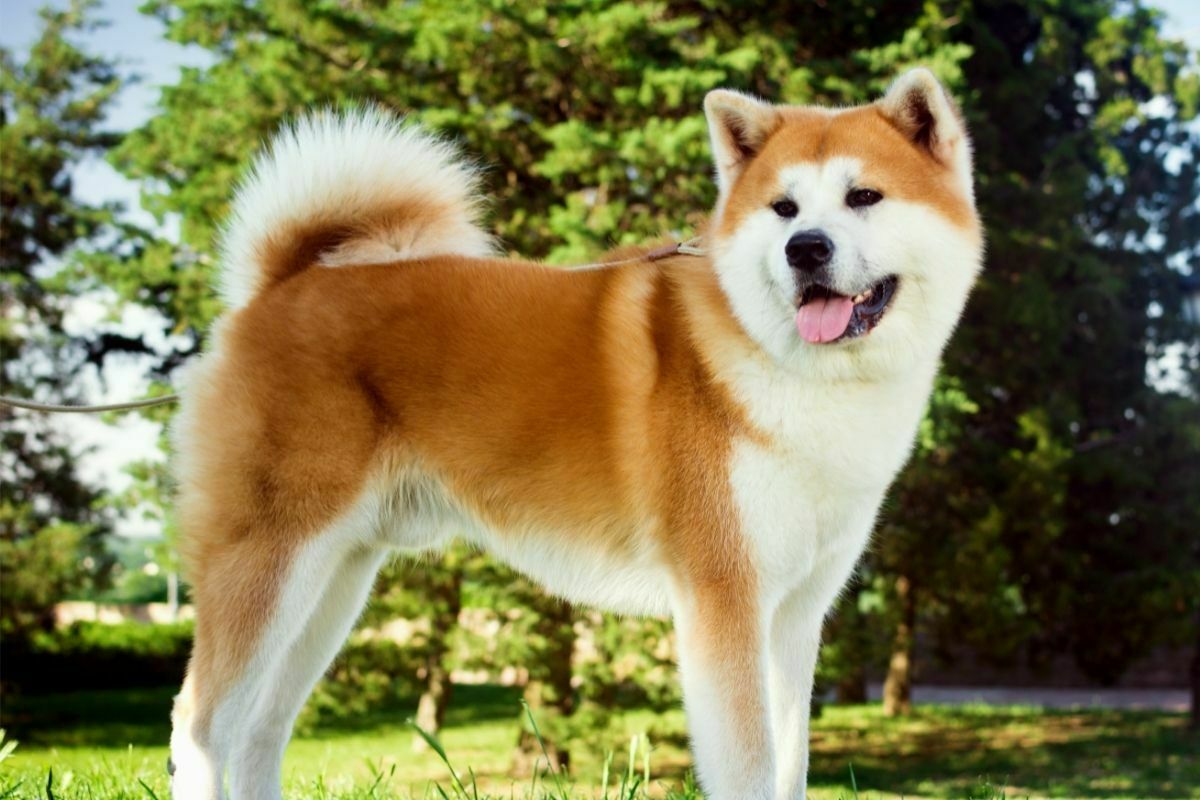 Akita’s are a well-known breed of Japanese dog that is known for their loyalty, courage, strength, and endurance. They’re very protective and territorial, making them ideal watchdogs.

Their coats are extremely dense and coarse, giving them a soft appearance.

The bear-like appearance comes from their broad and rounded body alongside their pointed and erect ears, their flat, broad skull, their wide muzzle and their almond-like eyes. 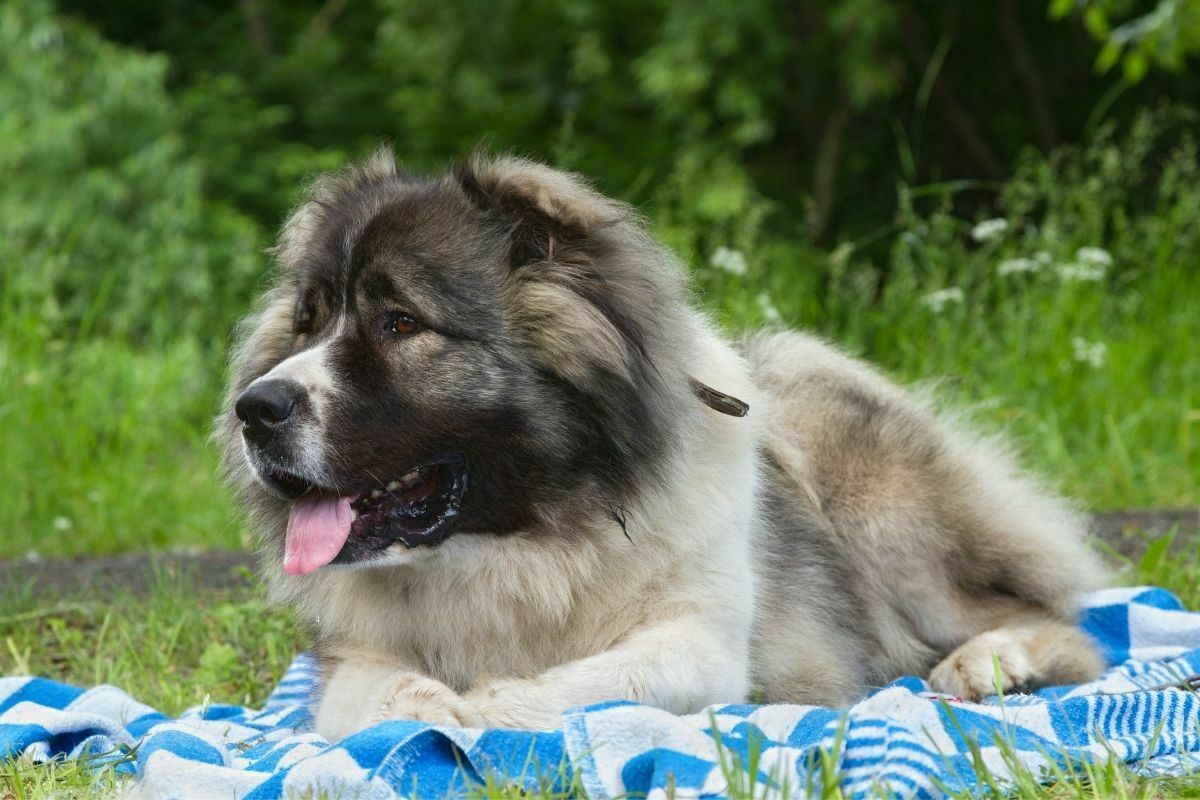 Caucasian Shepherds are a rare breed of shepherd dog that has its roots in Russia. The dogs are known for their intelligence, athleticism, and ability to work in harsh conditions.

Because of this working nature, they have a lot of energy and are very active.

The Caucasian Shepherd is also able to be a wonderful family pet thanks to its gentle and patient nature. Their coats are medium length and very soft, with square faces, large muzzles, and drooping ears that add to their bear-like look. 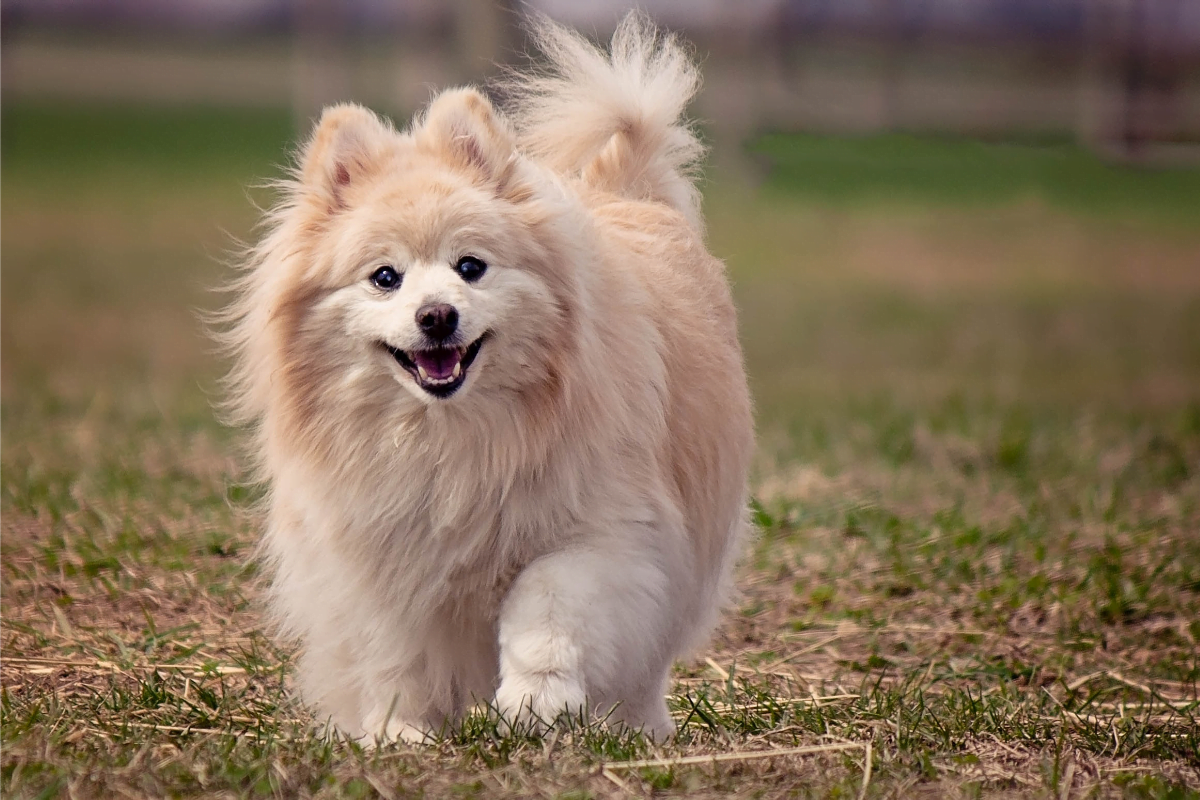 Pomeranians are a super cute toy dog breed that is a little different from some of the other dogs on this list, in that they resemble teddy bears or baby bears rather than full-grown bears.

Their coats are very fluffy, whilst their tiny faces and pointy ears add to their baby bear-like look. Their tails are bushy and curly, adding to that adorable appearance. 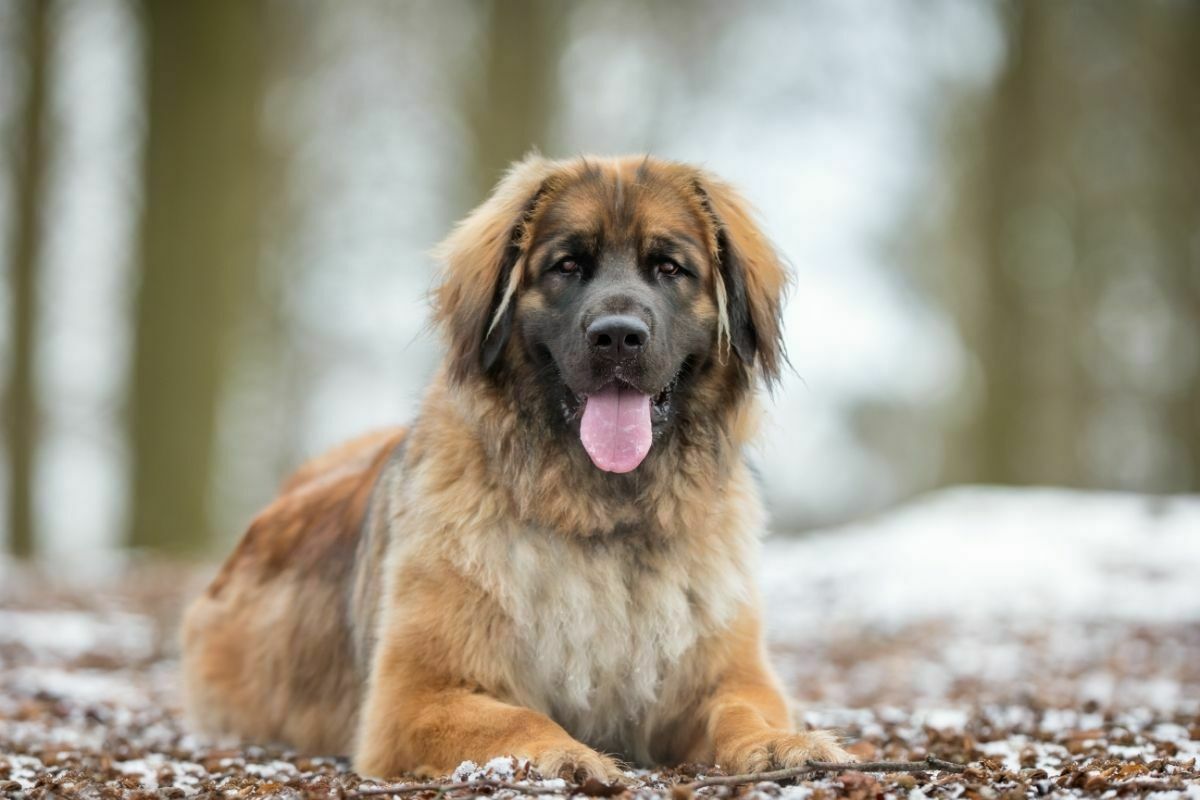 Their coats vary in texture, depending on the coat color. Some colors include black, red, tan, brindle, blue, and white. Their noses are large and flat, adding to their bear look.

Their eyes are brown, with a distinctive squinting expression. Their ears are floppy and hang down, giving them a bearish look 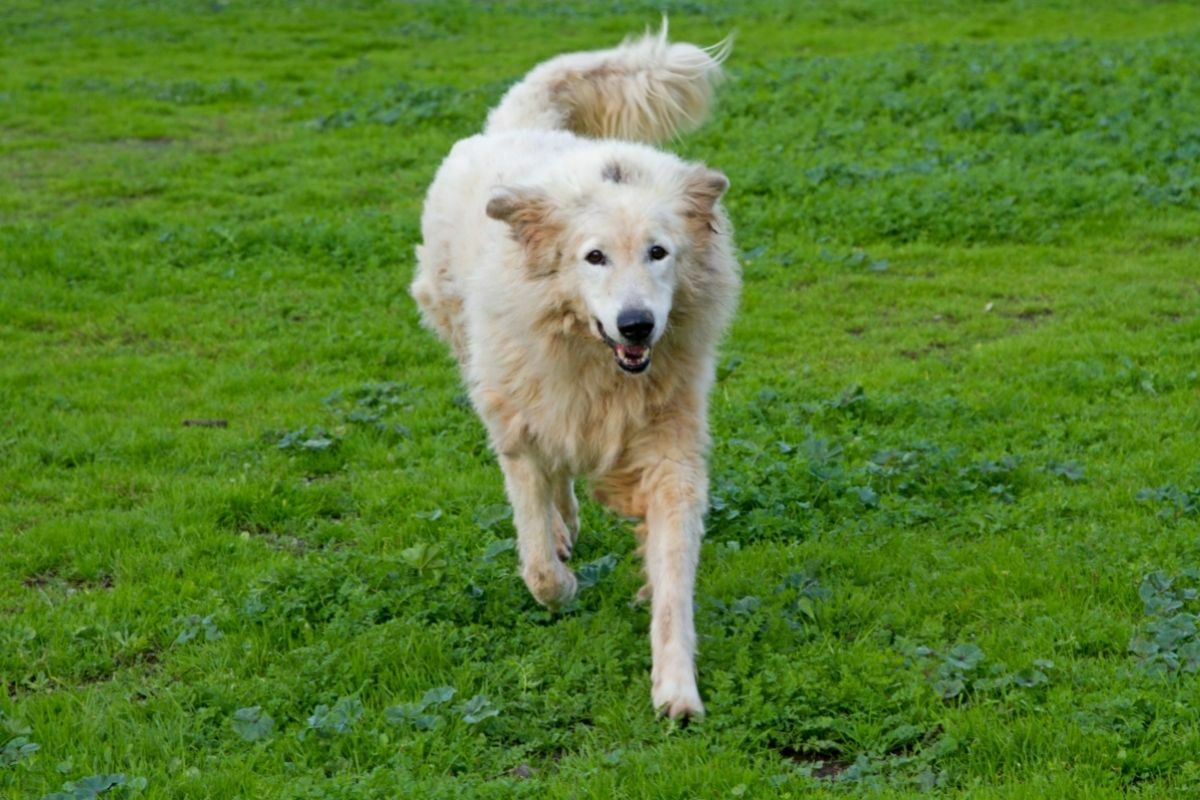 The Maremma Sheepdog is an Italian herding dog that was originally bred to herd sheep and protect flocks against predators. They’re known for their calm demeanor and loveable disposition, making them great pets. 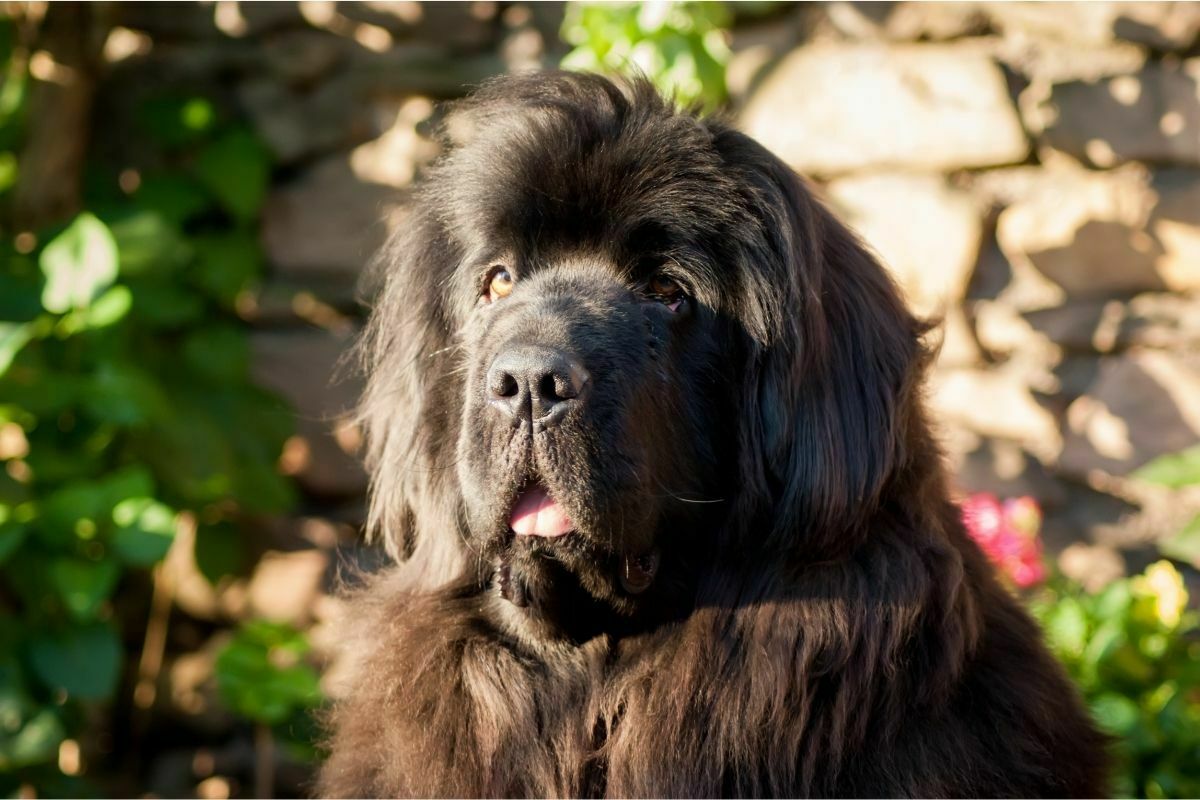 Newfoundlands are a breed of dog that originated in Canada. They’re known for being friendly, loyal, and playful, making them great family dogs. Their coats are short and curly, giving them a more bear-like kind of appearance.

Their heads are massive, wide, and triangular, with big ears that hang down. Their bodies are stocky and powerful, adding to that bear look.

So there you have a wide range of dog breeds that look like bears! As you can see, each of these dogs has its own unique characteristics, but all of them share one thing: their adorable looks.

If you’re looking for a new furry friend, then why not consider adopting a bear-looking dog? You might just find yourself falling in love with your new best friend!