Do you want a smart and powerful dog as a companion?

The German Shepherd Rottweiler mix has both of these qualities and makes an amazing companion for those who can live with this powerful animal.

The thing with mixed breed dogs is that we can only make predictions about their behavior, health concerns, appearance, etc. because everything depends on how their genres are ultimately expressed.

So, in this blog, I’ll talk about the awesome German Shepherd Rottweiler mix and everything there is to know about this breed!

So, are you ready to know this dog?

If Looks Could Kill: The Physical Appearance

I have divided this section into smaller sections for the sake of your understanding.

In this section of the article, I’ll go over a few things like the aliases, the expression of genes, and the basic looks of the German Shepherd Rottweiler Mix. 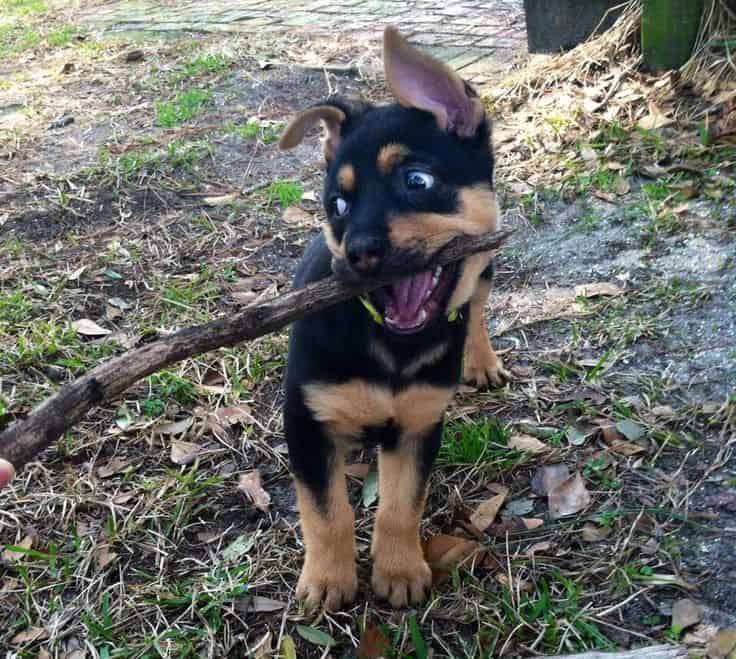 The Various Aliases That The German Shepherd Rottweiler Mix Goes By!

Since the German Shepherd Rottweiler Mix is the mix of two different breeds, it goes by various aliases that merge these two names together.

There are a lot of names that are used for this doggy.

Of course, the Rottweiler and the German Shepherd are the most recognizable dog breeds and the Shottie gets the best of the both worlds!

In this section, I’ll very briefly touch the subject of the Rottweiler Shepherd’s parentage.

As I have previously discussed, predicting the looks of a designer breed dog is a gamble and the parentage has a big role to play in how your dog will turn out to be.
So, let’s take a look!

The German Shepherd is a tall, medium-sized dog that has a muscular body and weighs between 50 – 80 pounds.

This dog is a herding breed.

Other popular German Shepherd mixes include: 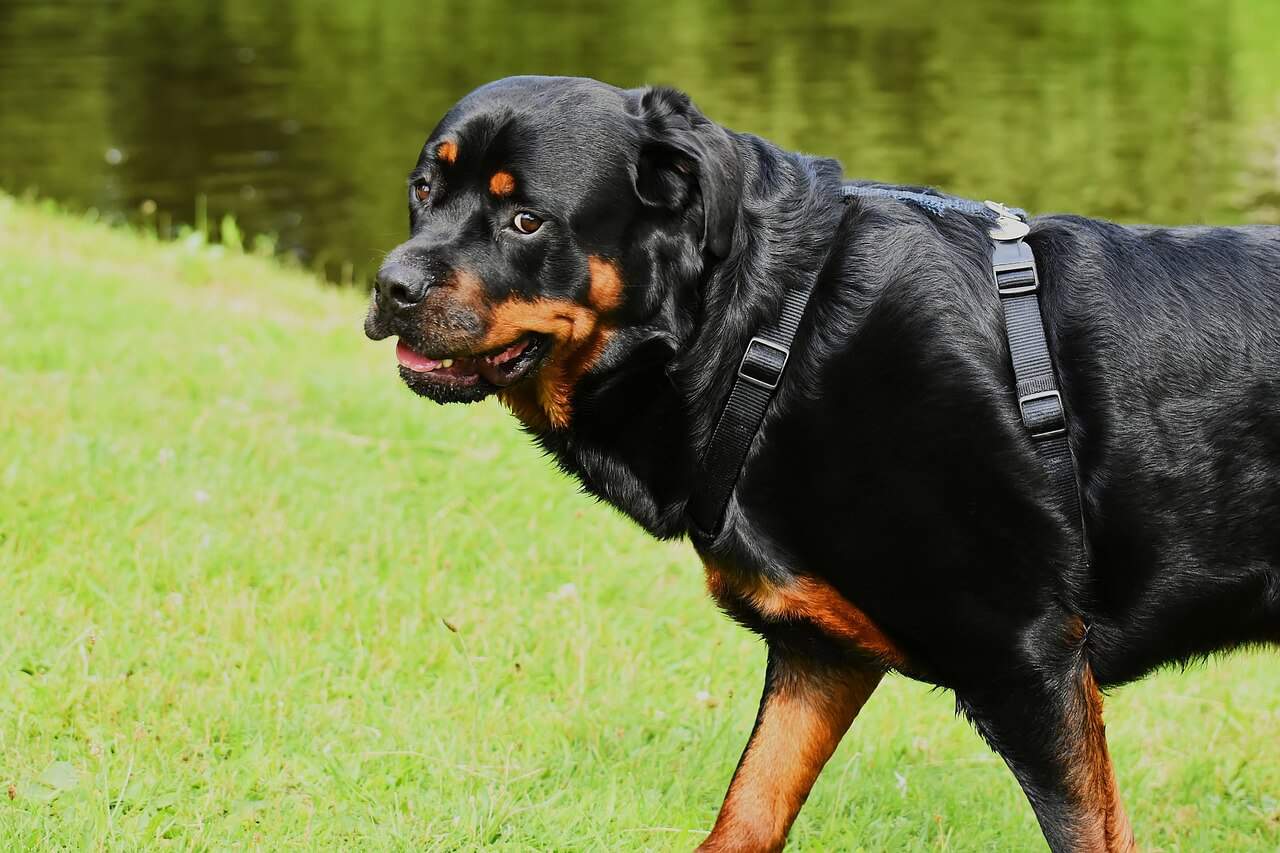 The Rottweiler, on the other hand, is a large and tall dog. The dog has an intimidating and powerful physique and weighs between 75 – 129 pounds.

This breed likes to work.

The Physical Appearance of A German Shepherd Rottweiler Mix

The physical appearance of the German Shepherd Rottweiler Mix totally depends upon the way his genes are expressed.

A German Shepherd Rottweiler Mix puppy can have the following colors:

But there is no hard and fast rule.

German Shepherds have a thick and a medium length coat while the Rottweiler sports a thick and short coat.

So, you see, a German Shepherd Rottweiler Mix would most likely have a coat that is:

Now, chances are that the dog will have a coat closer to that of a German Shepherd, but it is too hard to say anything for sure.

However, one thing is for sure.

Your German Shepherd Rottweiler Mix will need some good grooming and regular brushing.

I would strongly suggest that you start grinding the dog’s nails as early as you can and buy some good dog grooming brushes.

I have written about the need of nail grinding and the best nail grinders available in the market over here.

I recommend the Petter Pet Grooming Brush and the Hertzko Self Cleaning Slicker Brush if you’re looking for a good dog brush.

It’s All In The Personality: Basic Behavior Traits

In this section of the article, I’d like to go through the basic behavior traits of the German Shepherd Rottweiler mix.

That being said, let’s dive in! 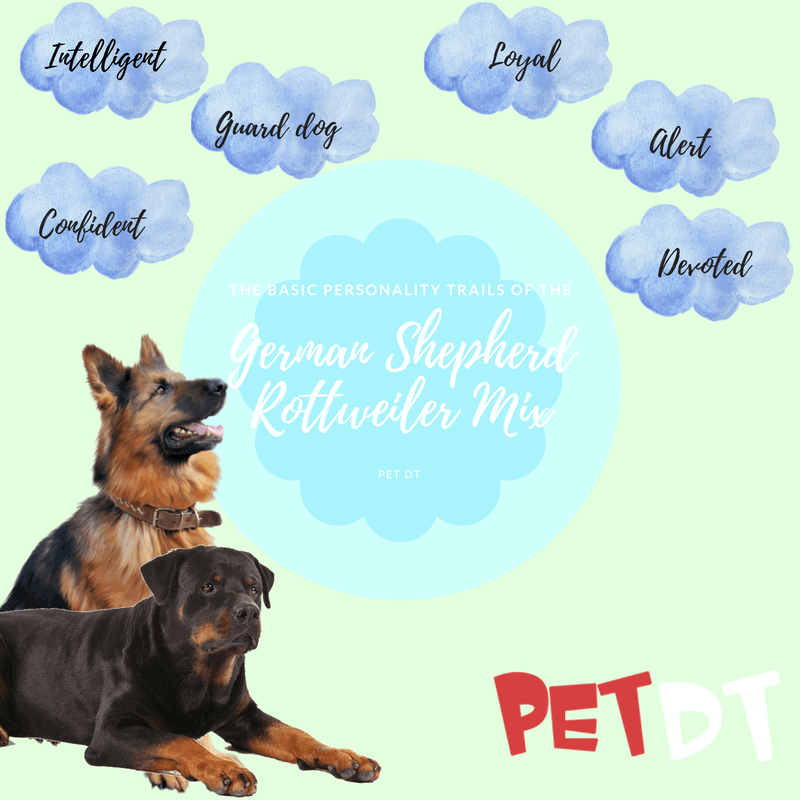 Intelligence runs in its blood since both of this dog’s parents are known for this trait.

So, I can assure you that this doggy will be very sharp and easy to train!

German Shepherds are known to be great guard dogs and this is one of the traits that the German Shepherd Rottweiler mix has inherited from that side of its family.

So, you shouldn’t worry too much about yourself (or your home) if you have a Shottie for a pet!

This dog has a mind of its own and is extremely confident.

The fact is that both of this dog’s parents are known to be very confident and bold—a trait that this dog was bound to inherit!

If you know anything about this dog’s parents breed, you know that they are as loyal as any dog can be.

And this, I feel, is one of the best traits a dog can have.

Depending on the dog, you furry friend could either be a family or a one-master dog.

This dog is an alert one and always on the lookout for potential threats.

If you live in a relatively unsafe neighborhood, then, having a German Shepherd Rottweiler mix for a pet is a very good idea.

The German Shepherd Rottweiler mix is a very devoted dog and always tried to please its master.

This is a trait that this breed inherited from the Rottweiler side of the family.

Rottweilers are known to be calm and this trait is also inherited by the German Shepherd Rottweiler mix!

I hope that I have explained all these behavior traits to you in simple words.

Now, let’s talk about food and nutrition, shall we?

So, in order to find the best food for you do, you can take a look at a food guide that I wrote about earlier: Best Dog Food for German Shepherds.

But, there’s a catch!

I would encourage you to consult a vet for a good diet plan for your dog because they will be able to guide you better about your dog’s nutritional needs, health concerns, and sensitivities. Some vets consider fresh prepped homemade dog food to be superior to other dog food but just like humans, sometimes cheap fast food is needed to save time and money and that’s okay!

One high-quality and inexpensive dog food that I would recommend to you is the Taste of Wild Canine Formula.

Each and every dog breed has a few health concerns that dog owners need to be on a lookout for.

And, the German Shepherd Rottweiler Mix is not an exception to that rule.

In this section of the blog, I’ll like to go through a few health concerns that plague this breed.

In fact, it is the leading cause of dogs over the age of 10!

Your Shottie’s parentage makes the dog more prone to this disease. So, you should keep an eye out for the symptoms of cancer on dogs.

For some reason, the German Shepherd Rottweiler mix is really prone to getting eye diseases such as cherry eye, conjunctivitis, dry eyes, etc.

Most of these eye diseases are treatable.

You can read more about them here.

Heart diseases in dogs are treatable as well as curable.

If the heart diseases are left untreated (or unnoticed) they can even cause death!

You can read more about the heart diseases in dogs over here.

With designer or mixed breed dogs, it is really hard to predict how the genes will be expressed. So, this means that one puppy could have physical as well as temperamental traits totally different than that of another puppy from the same litter!

I hope I was able to explain everything that you needed to know about the German Shepherd Rottweiler Mix to you!

Leave comments if you have any questions (or suggestions)! I am looking forward to reading them!